Candy is an award-winning writer, actor, social activist, comedian and producer. The co-artistic director of Black Honey Company, Candy has pioneered a fierce sub-genre of hip hop theatre that delves into the heart of radical feminist dreaming. Born of multi-racial South African parents and raised in the Western Suburbs of Sydney, Candy studied at the National Institute of Dramatic Art (NIDA). Since then she has gone on perform across the country and the world, and has appeared on the small screen in Newton’s Law(ABC/ Netflix), Tonightly with Tom Ballard (ABC) and The Katering Show (ABC/Netflix.)

Candy Bowers is featured in the Queerstories book which can be ordered on Booktopia. 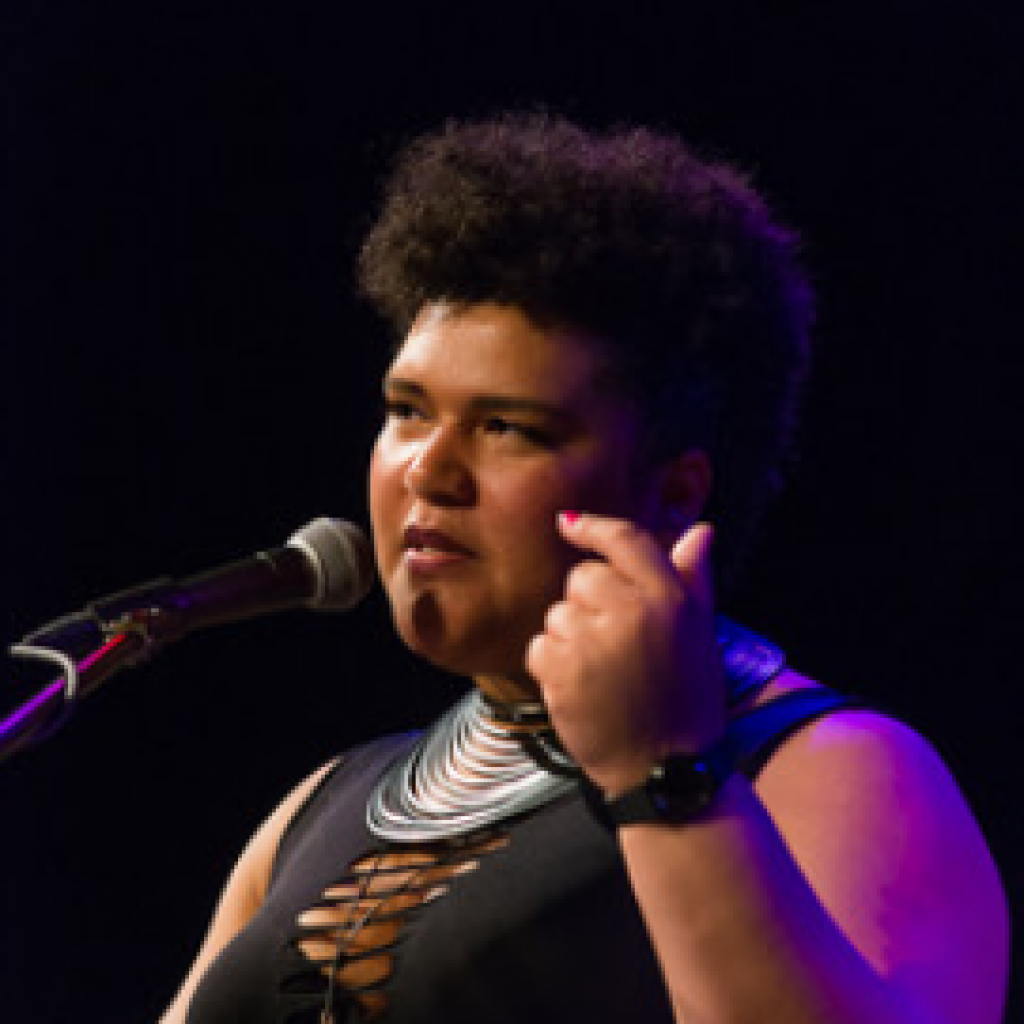 Hi. I’m Maeve Mardsen and you’re listening to Queerstories – the podcast for the LGBTQIA storytelling night I host and programme in Sydney and Melbourne. This story was recorded at Giant Dwarf, as part of my monthly Sydney event. Next up -Radical black feminist theatre-maker, Candy Bowers. Candy is prolific, both in her work as an artist and as an activist. I’ve been following her career for years, so I was thrilled to have her perform both at Queerstories in Sydney and Queerstories Melbourne.

Tonight I dedicate my performance to the black, lesbian, poet and educator Audre Lorde.

1934 to 1992. Many of the quotes in my piece come from her poetry collection, The Black Unicorn.

Dear Audre,
Today, I’m 38 years old. Today, I played Miriam Makeba for my students. I have designed a class called Decolonising Theatre, and I open with the real version of The Lion Sleeps Tonight. In its original context, the song is a mourning song, a message stick, letting the village know that the King has died. The King is dead tonight. For me, the Disney-fied re-appropriation of the song by The Tokens is an excellent case study in how the colonizer took and re-interpreted African culture to put their minds at ease.

In this version, we are at peace because the Lion is asleep, the Lion is something to fear. In the original, it is the Lion who is finally at peace and the villager’s weep. Now, sometimes, I feel like the grim reaper, killing my students’ childhood joys, a side effect of giving life to the herstories that have been cast out and left for dead. Don’t get me started on Pocahontas.

My interventions have not always been well received, but you, Audre, taught me to stay the path. “When we speak we are afraid to be heard or welcomed. But when we are silent, we are still afraid, so it’s better to speak,” you said.

Dear Audre,
Today I am 21 years old. Today, I was told by a series of agents and casting folks that I will not get work on the telly or the stage because I don’t represent enough of Australia. I challenged them. I said, “I’m a woman and I was born here.” They told me to relocate. Yesterday, I graduated from three years of blood, sweat, and tears at the National Institute of Dramatic Art, and today I failed on entry. I have no prospects and no agents want to represent me. It’s 2001, I’m 21, and I am crushed. What am I supposed to do with all of the characters inside of me, like the brown best friend I wish Sally had on Home and Away.

“Me and Sally are just gonna head down to the beach because we’re going to show the boys that we’re just as good as volleyballers as they are. Girls are as strong as boys, you know, Pip.”

Or, like the homeless woman that I met on Michigan Avenue in the death of winter in Chicago last year.

Or, the Ladettes I met in the toilets when I saw The Lion King in West End.

Or, what about that 40-year-old white South African man that I saw in the front of the IGA in Newtown?

What am I going to do with that guy? I really need to get him out of my body.

Your words always soothed my pain.

“If I didn’t define myself for myself I’d be crunched into other peoples fantasies of me and eaten alive.”

Audre, your poetry is keeping me brave.

*Imitates South African accent* Hello. My name is Happy Ma’x’wewe, and I am newly arrived. I see many similarities between Australia and my home of South Africa. I’d like to sing you a classic song, a song that so many of us can relate to. I wrote it this morning.

*Sings along with guitar*

The Colonizer not only wanted our land they also wanted our bodies. They did not ask – they simply took what they wanted, when they wanted it. Are you ready to learn the chorus?

HAPPY MA’X’WEWE: All right. Join in when you got it.

HAPPY MA’X’WEWE: And once he came, it was plain to see
He came to plant, not to sow his seed.
Back to his own, he would go, and we,
We would sing of the days when we were free.

Amandla! To Speak our language! To dance our dances and to walk on our own land. The spirit of our community is not lost. We just have a barrier that we now name the white man. Are you ready for the chorus?

HAPPY MA’X’WEWE: Now, how this ends is a twist, you know
For the Milkman’s daughters began to grow,
And as they grew, well, their milk, it flowed
And they fed their Daddy’s babies from below.

The white man preferred light-skinned women inside the home. We cleaned their toilets, we cooked their dinner, and we fed our brothers and sisters with our breasts.

CANDY: Now, at this point in the show, I did the boldest thing I’ve ever done in my life, which was to ask if there were any volunteers that were hungry of Dutch or English heritage.

We preferred male-identifying participants, and we dressed them as a baby in a nappy, a mop hat, and a bib. I’d bring them up onto stage and breastfeed them while the audience sang the lullaby very gentle.

CANDY: And I would say…

HAPPY MA’X’WEWE: Now, Andrew Bolt, before you question a light-skinned black person about their racial identity, and bring up the extraordinarily painful past of assimilation, you’ll remember this chorus.

Dear Audre,
Today, I am 39 years old, and I’m performing this piece for Queerstories in the Giant Dwarf in Redfern. I just wanted to say, thanks for being my rock, my ultimate lover and protector. Your words have been my saviour, my hope, my anchor, my shoulder, my life jacket, my comfort, and my oxygen. I’m not supposed to exist, either were you. From one black unicorn to another, I wanted to say thank you. You died of cancer just shy of your 60th birthday. You said, “Life is short, and what we have to do, must be done now.” Thank you for keeping me alive as an artist inside of the white supremacy of the Australian industry. I am fearless, whole and real because you were Black. Lesbian. Poet. Educator.