Bish Marzook shares stories about her father, his love of language, and what happens when she has to come up with her own definitions.

Bish is a writer, comedian, and scientist for good measure. She writes for SBS Comedy, regularly appears on Triple J and FBi radio, and co-runs Wolf Comedy, a Sydney comedy room committed to promoting diversity in comedy. You should definitely check it out. She also recently completed a PhD in cell biology because of course she did what an over-achiever. She has performed at writers’, music, science, and comedy festivals around Australia, and hopes to book her first food festival soon. 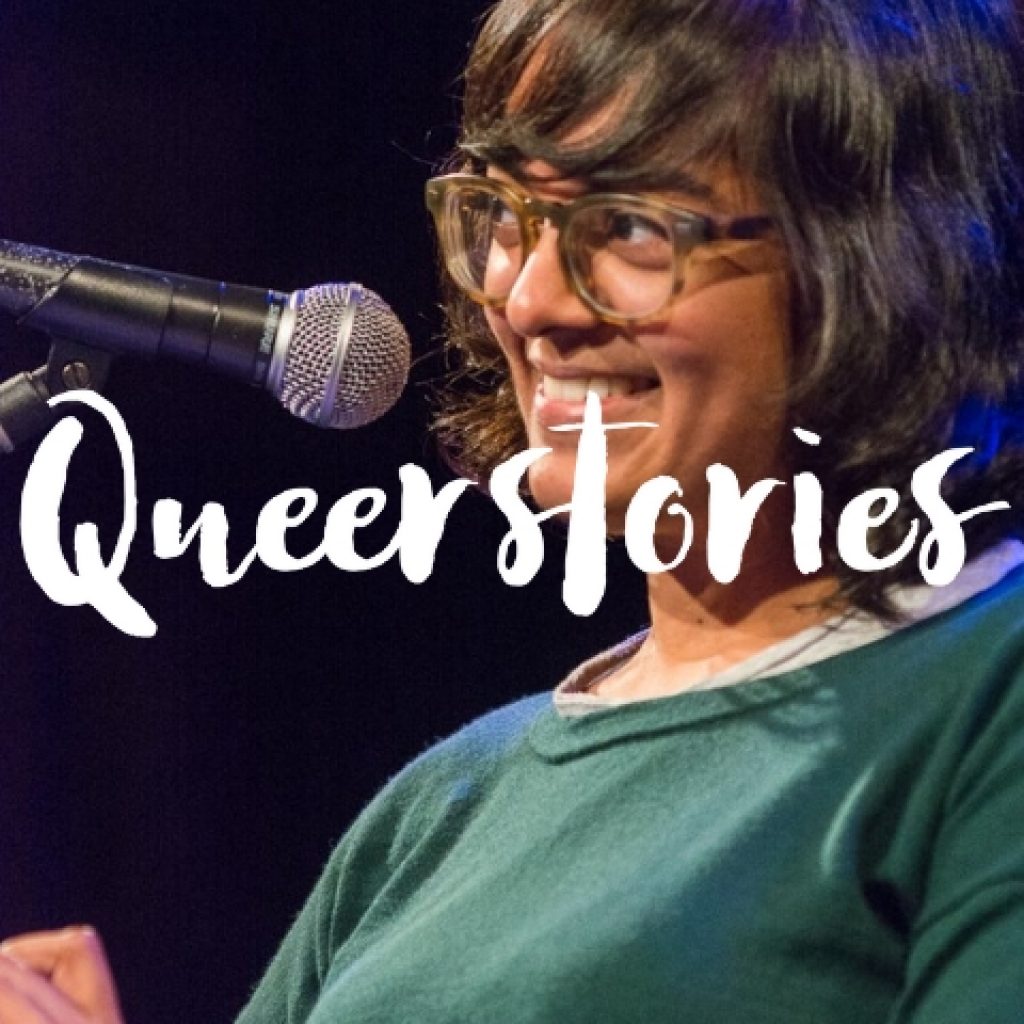 Hi I’m Maeve Marsden and you’re listening to Queerstories – the podcast for the monthly LGBTQIA storytelling night I run at Giant Dwarf in Redfern with support from the City of Sydney. This week, scientist and co-creator of Wolf Comedy Bish Marzook.

Hi Everyone. Before we begin, I should tell you a little about myself – first of all I’m not four years old for those listening at home. The truth is my metabolism runs on helium *commenting on her naturally high pitched voice*, I was the inspiration for the movie UP. That joke makes no sense but I love it. So something else about myself, I’m an immigrant. But I’m not one of those ‘bad’ immigrants. I’m a scientist, and a comedian – so I’m not stealing anyone’s job. *Audience cheers and claps* I love how you’re clapping for my future, which is sad and dire.

But luckily for me, and surprisingly to many Australians, my English is actually very good, so I’m allowed to write for lefty latte-soaked rags like SBS, which is how I pay my rent.

Speaking of excellent English, has everyone heard about the Australian government’s new plan for their citizenship and immigration laws? It’s pretty fucked. One of the things is that they’re going to put in a new English test before you can become an Australian citizen they’re making the test harder. You know what the title of the web page on the Department of Immigration and Border Protection says about this English test? It states applicants must ‘have proficient English’. I’m sorry, but you can’t ‘have’ proficient English, you can be proficient in English, or speak English proficiently, but proficient English, like a non-racist way of saying you don’t like brown people, is something you can’t just ‘have’.

Anyway, everything that I know about the English language is because of my father. My father is a brown, Sri Lankan, proudly Muslim man. I feel like there’s a lot of talk about immigration, educating people on Australian values, and an irrational fear of people that look like my father at the moment, so I’d like to talk to you about him a little.

My father would never explain the meaning of English words to me. I’m not sure if this was because English was his second language or because he just couldn’t be bothered explaining what words like ‘precocious’ or ‘exacting’ were to me, even though I was probably the literal definition of both. So whenever I’d go to him with a book or movie containing a word or phrase I didn’t understand, he’d point me to a dictionary for its definition. I learned what the word ‘prostitute’ meant – even though I was actually trying to look up ‘Protestant’ – and then I was very confused about Christianity for a while. This isn’t a joke about sex workers or anything it’s just about the equalising force of dictionaries. Some people learn about the world through Mad magazine and I had my dictionary.

I resented my father for the longest time, for making me truly comprehend the weight of words – like literally – he made me carry the dictionary to school everyday. But I think he soon started to resent himself for it, because I started to use those words against him. I had my first taste of war, and feminist victory when, aged 12, my father berated me for not wearing my headscarf properly while praying. He was a proud Muslim man, trying to raise a proud Muslim family, and explained that the headscarf, especially during prayer, was to be worn for modesty. I didn’t have to wear it all the time, no woman in my family did, but prayer was different. “See!” he said, while pointing to his own head, where he was wearing a small prayer cap usually worn by Muslim men when visiting a mosque or praying – think a fez but smaller – “men have to be modest during prayer too”, he said.

I remember giving him the side-eye. “Yeah, it is modest”, I said. “So modest, I can see most of your hair poking out beneath it. It’s not covering anything!”

So I was allowed to wear the prayer cap instead of a headscarf over my shoulder-length hair from then on. Yes, my father had taught me well and now he was paying the price. I was just happy because I was finally allowed to wear the thing that boys could, and that was the part of my life when I started to desperately wish I could be one. It was also my first taste of the power of words, and of bending them to my will. My father had taken the master’s tools, and had ensured I’d know just how to use them.

Many years ago when I came out to my mother as being interested in women, by that I mean interested sexually, not like interested platonically or artistically, which is apparently a big deal? Someone told me recently that he didn’t read women writers, and so I sent him an email saying fuck off and die. He hasn’t responded to me.

When I told her I felt that I was interested in women she responded by asking me if it was because I thought men weren’t into me, because I thought they didn’t find me attractive. This was when I realised everyone had their own little personal dictionary with what words mean to them. ‘Free speech’ means very different things to different people. So my mother obviously got hers from like a frat house definition of what it means to be a lesbian.

But what I should’ve done is come out to my dad instead. When my brother graduated from university many years ago, he sat my parents down and told them he no longer believed in God. My father became incredibly upset, and after a few hours of arguing, my brother stormed out of his apartment, leaving me to deal with my distraught parents. My father turned to me, and said, ‘You know, if he’d said that he was gay that would be OK, because you can’t control who you’re attracted to, but you can choose to believe in God, and he’s just being difficult.” I suppose my dad’s personal dictionary had an entry from a Lady Gaga ‘born-this-way’ definition of queer theory, but it was good enough for me. I was surprised, proud, and sad all at the same time. My father would never understand atheism, but I knew many atheists would never understand him either.

At the same time that I too started to not fully believe in God, I also started to not believe in the other bad G-word, gender. I started identifying as genderqueer and got a tattoo – my first visible one – on my forearm. It was an homage to Ziggy Stardust, a genderqueer icon to myself and many others. When I visited my parents in Sri Lanka for the first time after I got it, my father had a lot to say, as I had feared. Tattoos are extremely taboo in Islam, and Sri Lankans in general don’t look too fondly on them either. The first thing he asked was if it was reversible. Technically yes, I said, it was, but it would cost many times more than the tattoo itself. I knew this would resign him to the possibility of its permanence – even as a 70 year-old, my dad will cling on to the side of a packed Colombo bus rather than pay 100 rupees – roughly one Australian dollar – to hire a tuk tuk and travel in relative peace.

So then, he wanted to know what it meant. My father, the English teacher, the owner of multiple thesauri – was asking me for a definition. As tempting as it was to make my dad listen to hours of Bowie – I didn’t choose that route. I asked him why he wanted to know – it was a personal symbol I’d chosen for myself, and that was all it was ever intended to be, but it was also raising a lot of eyebrows – especially among my relatives.

“Why do you need to know?” I asked, defensively holding my arm and ready to hop on the next flight back to Sydney in case things got ugly. “Because I have to teach everyone else”, he said defiantly. “I can’t let them say things about you they don’t understand.” My father had done his best to teach me, to help me navigate a world he knew I wouldn’t understand, and one that wouldn’t understand me, and it had served me well. But I finally realised that it was now my turn.