Writer Benjamin Law comes out to his grandmother – half a lifetime after he originally came out.

Benjamin Law will be featured in the new Queerstories book which can be pre-ordered on Booktopia. 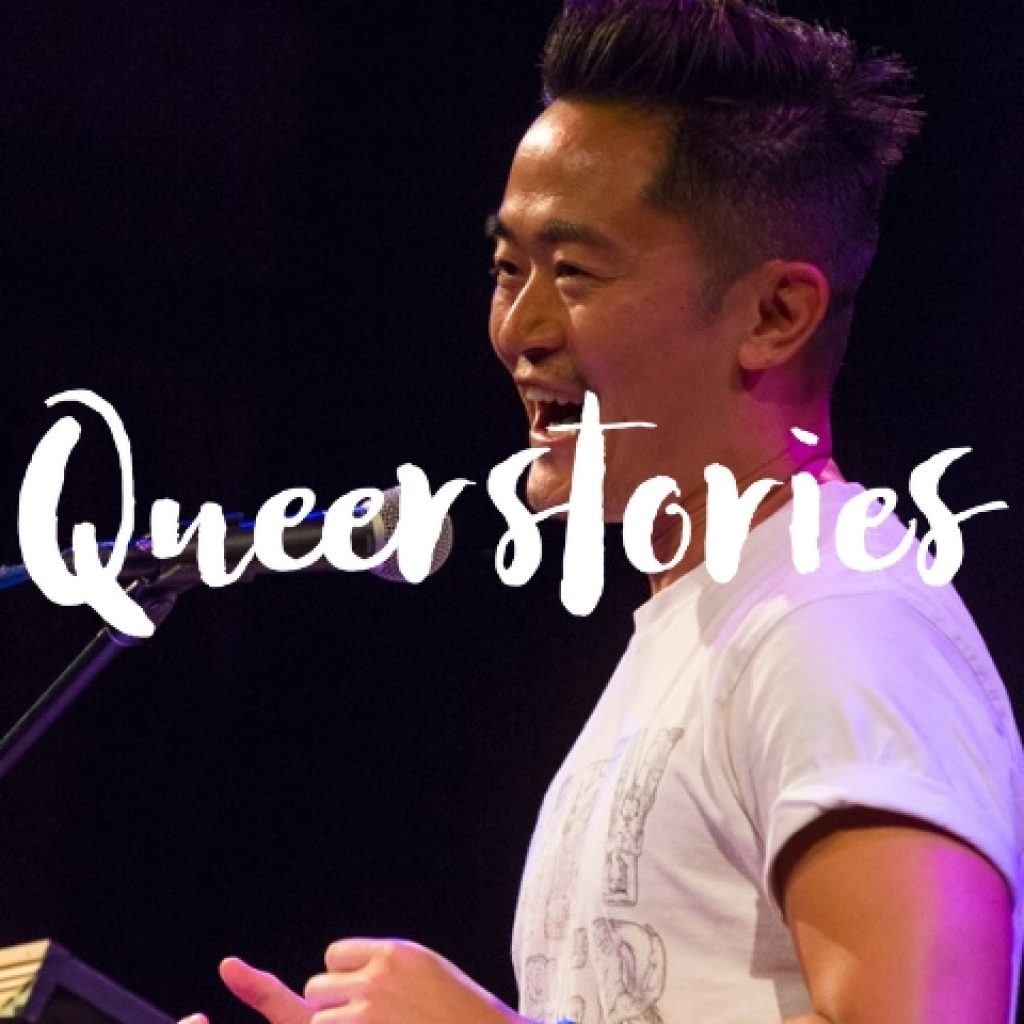 Thanks Maeve, I love you and you’re a mole. Hi everyone its so great to be with the LGBTIQ community and I know that some people sometimes say about that acronym, that it’s a bit of a mouthful, L G B T I Q, but I just want to remind those people that Heterosexual has the same number of syllables.

I’m going to tell you a story about myself, and it’s about coming out which I did recently. I’ll explain. Before I start I have to say  as time goes on, I’m not sure how I feel about the term – or the concept of – “coming out”. To me, it’s always sounded vaguely sinister. A bit graphic. “Coming out.” It sounds like you’re doing a poo.

But I’m lucky enough to say I can look back and genuinely say I’m fond of my original coming out story. I was 17 and I had spent my entire childhood in the state of Queensland, which, at any given moment is either the most regressive or progressive state in the country. It’s kind of nuts.

Some of you might laugh at the idea of Queensland – cradle of Katter, hellmouth of Hanson – being a progressive stronghold, but keep in mind also Queensland is the only state to have directly elected not just one, but two, women premiers. (No other female premier in Australia has ever been elected directly into office.) On the other hand, though, we’re the only mainland state to have no legal nude beaches, American Psycho still technically needs to be sold in shrink-wrap, we held off on fluoride in our water for decades (the only thing stranger than a British smile is a Queensland one) and we were the last mainland state to decriminalise homosexuality – in 1990, when I was eight years old.

Anyway, my point is, for a significant period of time, for my childhood, the adult I would grow up to be was criminalised by the state. And by the time I was in high school – a conservative, Lutheran private school where all the cool kids were super-straight surfers – being gay was still considered the worse thing you could be considered to be. Jokes flew around campus like, what’s the sound of a poofter farting? *woosh sound into microphone*, it’s actually kind of funny now.

So by the time I was 17 – about to leave home, and having managed chronic anxiety and panic attacks throughout my entire teens – I decided I’d come out as gay to Mum, more out of exhaustion than anything else. There is nothing more tiring than hiding a key aspect of your identity 24/7, and I did not have much energy as a teenager away.

One night, after I’d graduated (we graduate earlier up there), but before I was going to move out of home, I said I had something very important to tell her, then burst into tears unable to get the words out. And I don’t cry in that dignified Cate-Blanchett-on-the-big-screen way. My crying is snotty and ugly, and I sound like a small animal whimpering after being kicked repeatedly.

She looked concerned. ‘Are you on drugs?’

I shook my head.

‘Have you gotten someone pregnant?’

When I nodded, worried about her reaction, she put a hand to her chest and patted me.

‘Well, what’s wrong with that?’ Mum asked. ‘There’s nothing wrong with being gay.’

I looked up at her, surprised. ‘Really?’

‘Gay people can’t help it,’ she said. ‘It just means that something went wrong in the womb, that’s all.’

(Recently, I reminded Mum of this conversation and she totally stood by it. “Ai,” she said. “There’s no scientific proof of why people are gay. Probably the surgeon cleaned too much stuff out after the miscarriage I had before you, scraped out too many hormones out or something.”) It’s a lot to process I know.

After that I came out to my older siblings. Then my younger siblings. A few years later, I came out to my dad. Then I’d come out to taxi drivers. And hotel reservation staff. New colleagues. Extended relatives. Some arsehole taking my order. Because coming out, I think a lot of people in this room know, isn’t a single moment. Queers spend our entire lives coming out.

And so cut to present day, 2017. It was the end of a long week, and my boyfriend and I were furiously packing bags to fly interstate. Two of my sisters had birthdays – Candy’s 40th, Tammy’s 30th – and they’d booked a house on Stradbroke, an island in Queensland only accessible by barge. Everyone was coming: my divorced parents; all five siblings; myriad partners. It was supposed to be fun, but in a post-nuclear family like ours, trips like these can spell possible fallout. “Just letting you know,” Tammy my sister texted me, “Ma-Ma is staying too”. Ma-Ma is my grandma on my dad’s side. “A Reminder to you and scott”

Fuck, fuck, fuck, fuck, fuck. Clearly I hadn’t read the itinerary properly. So as I said, originally I came out to Mum half a lifetime ago at 17 (I’m 34 now), but I’d never come out to my Ma-Ma, my dad’s mum and last living grandparent, and Scott would be there too for the entire weekend. How did this happen?It’s partly cultural (that unquestioned Chinese expectation to marry), partly generational (she’s 88) and partly to do with language.

Cantonese, my families language is like the Russian of Asian languages, you know that mandarin has four tones? Cantonese has nine. I don’t know how you’ll sign this but *speaks a sentence in Cantonese, each word seeming very similar* is a sentence.

Because my spoken Cantonese is so appalling, I wouldn’t know where to start. My family were also ambivalent. “I don’t know, how would she react?” my Dad would say. “What if she had a heart attack?” My siblings would say. All very helpful.

So I left it at that for a very long time. It was easier to deflect Ma-Ma’s questions (“I’m too busy to have girlfriends; you got any boyfriends?”) then to tell her the truth and potentially spoil a rare evening together. Inevitably I’d go home feeling pretty miserable, feeling the full weight of the cop-out. But now, the prospect of a weekend together and having to pretend just exhausted me. It wasn’t the 1950s anymore, Scott wasn’t a “flatmate” and she deserved to know.

“I’m just going to tell her,” I said, zipping our bags.

“Seriously?” he said, chasing after me.

I texted my family to let them know. I could tell they were worried when they didn’t text back.

That night, after dinner, everyone played board games while Ma-Ma and I quietly watched.

And then it came up.

“You’re doing so well with work now,” she said. “Now all you need to do is find a wife.”

And I sighed and I smiled weakly, two wines in.

“Ma-Ma,” I said, taking her hand and speaking clumsily in Cantonese in what I imagine must’ve sounded like an inexplicably thick Russian accent to her. (Go with it.) “Ma-Ma I will not be doing the marriage.”

She shot me a look and slapped my thigh. “What? Don’t be silly.”

She slapped my thigh again. “What are you talking about?”

“That white ghost devil over there,” I said, pointing to Scott. “He is be my boyfriend.”

All of us here who identity as queer – transgender, lesbian, intersex, bi, gay – ostensibly, on paper, don’t have that much in common. But what we do share is a period of hiding and a moment of fear, we we need to clarify, correct or bail someone up. The moment of revelation. Most of us would have – at some point – had to tell people that their assumptions about us were wrong.

But what I’ve also learned over the years is that if people care, what they mostly need is reassurance.

Ma-Ma thought about it and scanned the room: this sprawling family she’d made, all their partners, and this grandson who wrote stories about this stuff that she’d never read. She patted my hand.

And though there’s still confusion now – my Chinese grandmother, though she knows I’m in a relationship with Scott, doesn’t really see why us being in a committed gay relationship should prevent either of us from getting married to women – I feel lighter. And the next day, as I told my siblings the story of me coming out yet again, floating in the sea, I was happy too, and for so many reasons, feeling 17 again.