Theatre critics Cassie Tongue and Ben Neutze tell a story of musical theatre legends, glitter emerald eye-shadow, and pants-wetting in the presence of a Minogue.

Cassie and Ben are two of Sydney’s leading theatre critics and are among the most influential performing arts commentators in the country. Cassie writes regularly for Time Out Sydney and Guardian Australia, and Ben is Deputy Editor of Daily Review. Ben and Cassie bring intelligence, politics, feminism and a queer eye to the fine art of theatre criticism, and they are 100% my favourite bromance in the Australian media. 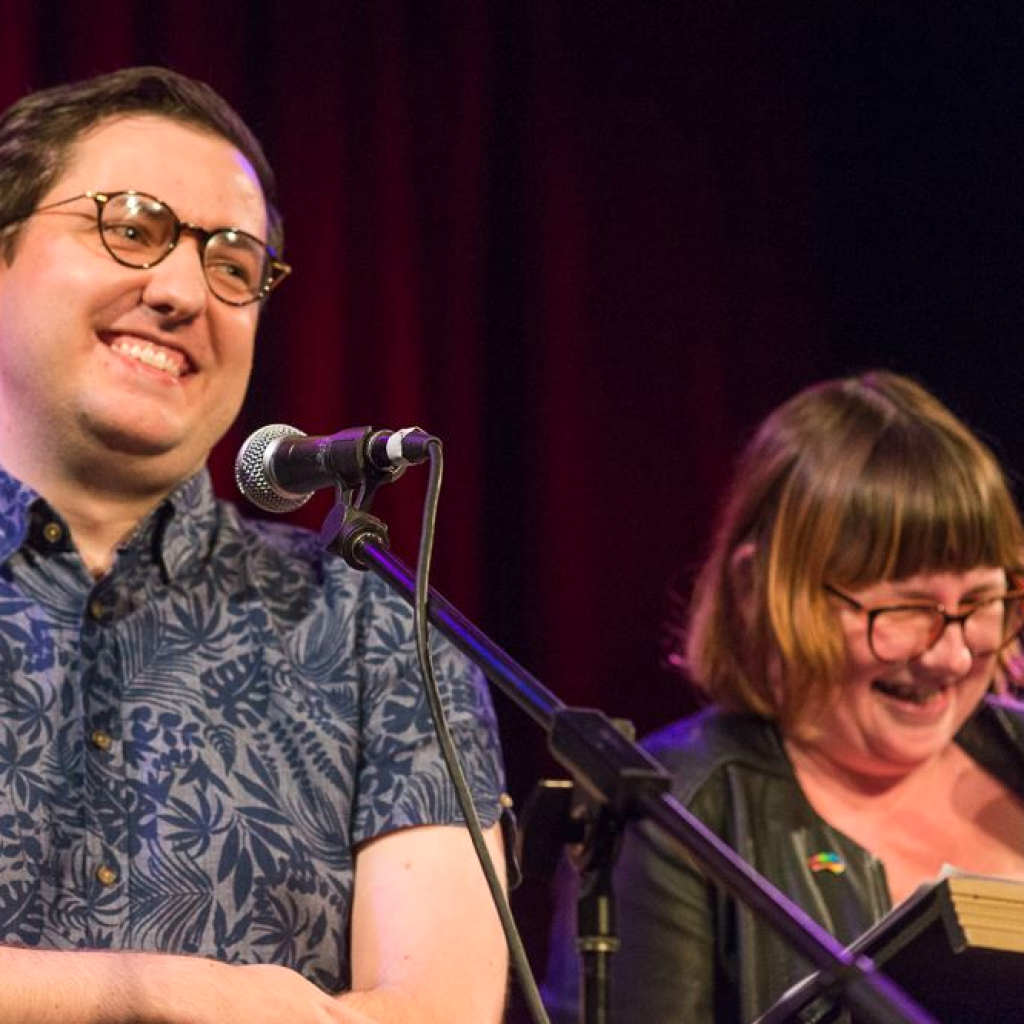 Hi. I’m Maeve Marsden and you’re listening to Queerstories – the podcast for the monthly LGBTQIA storytelling night I host and programme. This week’s story was part of a special event where I invited pairs of queers to share a tale together. Lovers, family, couples, friends. Queerstories Two by Two, celebrating all forms of queer love. Next up – theatre critics Benjamin Neutze and Cassie Tongue.

BEN: Sydney is riding high on the unique and misguided sense of national pride that comes with a major sporting event.

CASSIE: Nikki Webster has just transformed Olympic glory into pop glory, with the release of the enduring classic and total banger Strawberry Kisses.

BEN: And Bardot has managed to overcome the difficult second album phase, following up the self-titled masterpiece with the release of Play It Like That, and although Katie Underwood had quit the band, the new four-member line-up looked as though they would stand the test of time. After all, all of the biggest and best bands in pop history had four members: Abba, The Beatles, and Destiny’s Child in its original and finest line-up.

CASSIE: We should probably just take a break here and confess that we initially wanted to use this slot to promote our original cabaret. It’s called Just Remember I Can Be Poison: The Katie Underwood Story. But Maeve told us that we should talk about our relationship.

BEN: Although, I would argue that an outline of our Bardot related dream musical theatre project… And, yes, more than one… it would probably just reveal more about us, but this is the story we’ve been allowed to tell.

CASSIE: Two households, both alike in untapped camps and civility, one in fair Dubbo, the other in fair Greystanes where we lay our scene.

In Greystanes, an 11-year-old boy had spent the better part of summer devouring Kylie Minogue’s magnum opus Light Years. If you’re not familiar with Kylie’s discography, this is the album with Spinning Around and On A Night Like This.

BEN: And, Your Disco Needs You: A song with more gayness in its first four bars than this entire venue. Like…

CASSIE: Anyway, something miraculous had happened. That boy’s parents booked him tickets to Kylie’s on a Night Like This Tour. The boy managed to stay fairly chill throughout most of the concert, which is lucky considering that just a few years earlier he wet his pants at Grease: The Arena Spectacular.

And that only starred Dannii Minogue. But the point is, he was pretty chill until the ’80s medley. Dressed head to toe in red leather, Kylie Stepped Back in Time before launching into Never Too Late, Wouldn’t Change A Thing, and Turn It into Love, but the medley still had its sweet, sweet climax to come. The beat broke down and Kylie’s backing dancers, in their sparkly gridiron inspired costumes, fell into line. The beat began to build and then suddenly it burst into Kool & The Gang’s triumphant Celebration, and that boy sitting just a few rows from the back of the Sydney Entertainment Centre leapt to his feet and squealed, “Wahoo!” Wahoo!

For Christmas that year, the boy was given a DVD filmed at that unforgettable concert, and although he always skipped over the song where her female dancers did a pole dance, he repeatedly watched the special feature in which the male dancers spoke about splitting their sailor pants. Four years later, when his parents learned that the boy was gay, they were… surprised.

BEN: Meanwhile, in Dubbo – we’re still in 2001 – a 17-year-old overachiever had just completed her four-unit HSC English exams a whole year early, and-

Yeah, I know. She was riding out to the end of Year 11 on a high. Unfortunately, she was too busy working at her part-time McDonald’s job to go to any of the cool backyard bonfire parties around town with any of her cool friends, which she totally had. So, she was home after midnight from closing down the Cobra Street Maccas drive-through. Wait. Dubbo doesn’t have a 24-hour McDonald’s.

BEN: Well, the point I’m trying to make here is that we’re talking about another place in time. She’d just come home, and she switched on Channel V to wind down before bed, and there it was: A pair of sequined shoes turning triumphantly on a not-so-Lazy Susan. Music building in the background, and then she appeared. A bombshell with a sleek brunette ponytail and glorious emerald glitter eyeshadow appeared. She locked eyes, those verdant wonderful eyes, with the camera and sang, “I will prove you wrong.” On screen, a cutthroat dance battle to the death. It was Murder on the Dancefloor!

But, in the family room of 16 Coral Crescent, there was a different kind of skirmish, a visceral awakening of a young lesbian’s soul. She didn’t come out until she was 20, so the boy from Greystanes won.

CASSIE: We’re not saying that pop music turned us gay, although it’s a possibility.

But we are saying that our ability to find ourselves in hidden meanings while reading through pop lyric lines, and probably also our complete lack of good taste in music, has made us excellent theatre critics. We are held in almost disturbingly high regard by a few people, and it’s odd. We actually first met very briefly at a forum for emerging critics in 2012. We didn’t really speak much at that first meeting. He had that kind of hard “I will eat you alive” face on that quite a few gay men have in their early 20s.

Yeah, that one. But, it’s the one that you learn eventually is actually masking some insecurities in a really lovely soul but, in the moment, I was really intimidated.

BEN: She was wearing PAC-MAN earring.

CASSIE: Okay. One was PAC-MAN and one was a ghost.

CASSIE: we became friends though at an Elaine Paige concert. For those of you-

*A group in the crowd laugh*

Oh, there’s a few. But, for those you who don’t know who Elaine Paige is-

CASSIE: Elaine Paige has been England’s leading lady of the stage since I don’t know, the War?

CASSIE: The first thing we really bonded over was that despite having a backing singer, she opted to perform a duet with a flute.

BEN: Yeah, it was… I know him so well from the musical Chess, which actually-

Yeah, it has a really sweet call and response thing going on, so it sounded a little something like this… Apparently, I’m doing this.

Anyway, this moment has deeply informed our critical practice. We promise. It’s the type of meeting of the minds as critics that make you feel totally justified when you drop opinions like, “This Shakespeare cult has gone too far.”

BEN: Or, “Legally Blonde is the most perfectly constructed musical of its decade. Or, even, “The world has waited too long for That Don’t Impress Me Much: The Shania Twain Musical.

CASSIE: That one’s going to open in Vegas, we think.

BEN: Who else would have it?

CASSIE: *Laughs* But, all of this has also informed our friendship. We find shared joy in the ridiculous, and we stick up for each other in low moments. He’s the first person to hear my great or terrible news, and we’ve spent at least the last three years in a constant long-running conversation that we occasionally pause to do work or hang out with other friends. My mother, half a dozen arts publicists and early ’90s rom-coms all thing we should get married, but I just feel lucky every day to have found a person to face life with, who also has the same correct feelings about which melon is the worst.

CASSIE: We also have the same opinions on who is brilliant.

CASSIE: And, he is legit funny.

BEN: There’s actually a bit here I was meant to ad-lib, but apparently not funny enough to do that.

CASSIE: I will say though, when we wrote this, I handed the script back over to him and said, “Punch it up and make it funny,” and you all laughed, so apparently, he’s good. But what I will say is that he is far more kind and caring than he will ever admit.

BEN: Yeah, cheers. That’s a bit awk’. Cassie is legit one of the best people I’ve ever met, but Elaine Paige never showed up at the stage tour that night.

CASSIE: Neither did her flute.

BEN: And, to be honest, the thought of telling stories about myself, including wetting my pants in the presence of a Minogue, it’s pretty terrifying but with Cassie here it is very nearly bearable. But this has been more than enough, so thank you for listening to our presentation.