Bastian Fox Phelan is a writer, musician and zinemaker who lives in Newcastle on the land of the Awabakal people. They were shortlisted for the 2017 Scribe Nonfiction Prize, their writing has been published in The Lifted Brow, Runway, Scum Magazine and Tincture Journal, and they’re currently working on a literary memoir signed to Giramonda Publishing. Bastian works with The Museum of Contemporary Art Australia and The National Young Writers’ Festival to deliver their popular Zine Fair events, and they are part of dream pop duo Moonsign, who just released an album about grief and climate change on Yes Rave records. Bastian performed this story at Newcastle Writers Festival and then again at Sydney in August, 2019.

The night before, I’d confessed to my friend about the business with ‘stove photography’. My friend laughed, imagining my phone’s photo gallery.

“You could have an art exhibition,” they said. “Print out all of your photos of the stove and hang them on the wall. You could call it ‘My OCD.’”

We laughed together, but behind the joke, I knew I was hurting. I wasn’t like this before.

So when did it start, and why?

When I arrive at Melbourne airport, I board a shuttle bus and sit towards the back. The bus is empty. I take a selfie, and send it to my sweetie. Gorgeous one, he writes back. I send Heart Eyes Emojis. My partner has been in the desert for a month, and I’ve been spending a lot of time alone. I think about the conversation I’d had with my partner’s father that morning as he drove me to the airport. I’d asked him, ‘do you have any weird habits before you leave the house?’ I told him about the stove. He said I should write a story about it.

The shuttle bus begins to fill. The people who sit near me have smartphones in their hands. I pull up my hoodie, and turn away. There are certain spaces where I have to careful. Airports. Tourist attractions. Anywhere with a higher level of security, or lower inhibitions. It’s happened in bars, and restaurants. On public transport. Anywhere that I stand still long enough for someone to notice me, take out their smartphone, pretend to take a selfie, and instead take a photo of me.

Most recently, it happened in Fremantle.

When I’d stood on the steps of The Roundhouse, a former prison, and looked back down High Street I saw concentric circles in yellow paint rippling across the buildings. The optical illusion was incredible, and I got out my phone to take a picture.

“Taking in the view?” an older man said. Not to me – to his teenage son.

The teenager was looking at me, and holding up his smartphone.

The family went up the steps to the circular building. I followed them. I’d read that The Roundhouse was a panopticon, a type of prison where inmates can’t tell when they are being watched, which means they behave as though they are always being watched.  At the entrance the boy hung back.

“Gold coin donation, brah” he said to his dad, pointing out the sign.

I thought about telling him that I was now charging admission – gold coin donation for public gawking. I stood near the boy, and we looked at the harbour. I was searching for words.

The dad came out and said, “You’re checking it out, are you?”

I froze. As the family walked back down the steps, I heard the the older man say, “The only way to find out is to ask it.”

The words had burned. I followed the family down to the street and watched them go into the carpark, and get on their shiny quad motorbikes. I stood at the foot of the steps, crossed my arms, and stared. They saw mw watching them. I stared until the bikes had left, then a woman came around the corner, saw me, and jumped in fright.

“Those people were hassling me,” I said, trying to reassure her.

She glanced at me for a second, and then scurried off.

Out of context, I’m the one who looks dangerous.

The day before I flew to Melbourne for the writers’ festival, I still hadn’t written the piece I was meant to read. I woke up at 5.30am. Ayurvedic wisdom says it’s the best time to get up, to avoid sluggishness, so I was trying it out. The alarm went off, and I didn’t hit snooze five times, I just got up. In the spare room I started writing about a shoulder injury that I’d steadily worsened over the past four years of writing my memoir. I had thought that bodies were machines and if they broke down, you could wait until you had the time and money to take them to a mechanic. But the physio’s words kept rattling around in my head: It’s never going to heal.

Everything has a hidden cost. I wanted to be a writer. I wanted to write about my life. I wanted to take the mundane, to drill down into it, excavating layers of human pain, and I wanted to find the emotional core, and bring it to the surface, polish it up, and show everyone the multi-faceted, shining gem. That’s how I’d let it go, I told myself. But, down in the story mine, walls kept collapsing. I’d find myself buried in new layers: the pain caused by other people, by the way they treat me. Because I’m different. I’m female, and I have facial hair. I choose to keep my facial hair. And this marginal form of sex variance means I’m dangerous. And it puts me in danger.

After writing at home for an hour, I decided to leave the house and go to my studio in town. When I try to write at home I always end up cleaning for hours. That’s why I’d got myself a studio. I showered, packed my bag. Then I walked into each room of the house and unplugged the appliances, switched off the power points. I checked all the windows. I switched off the lights. I looked at the stove. I touched the stove dials, left to right, right to left. I counted out loud: 1, 2, 3, 4, 5, 6. I thought about how, when I left The Roundhouse in Fremantle and got in the hire car, I had to tell myself: Do not drive dangerously. Do not drive dangerously just because you’re upset. My foot on the accelerator wanted to transfer all that burning energy into speed.

For some reason, leaving the house always takes forever.

I walked downstairs, and at the front door, I turned back. I had to check the stove.

When did this start, I wondered. There must be a story.

Back when I was living in Berlin, my partner set our bedroom on fire. I was in the kitchen and heard him shout. Panicked. Went into the long hallway and saw him at the end, in our room, with flames. I ran, calling his name. But when I reached the fire, I froze. My partner yelled, told me to get something. Then my brain woke up. I got a towel from the bathroom, drenched it, and threw it on the flames. After this, instead of curtains on the window frames, we had scorch marks.

I remember lying in bed that night. At the very edge of sleep, I jolted awake. I’d heard an echo of my own voice, calling down the hallway.

That could be it. The origin story for these repetitive narratives. Or it could be the fact that whenever I’m in public, I become vulnerable. What if I left the stove on. I have to go back and check. What if someone on the street harasses me. Better stay home instead.

I have to leave the house for work, though. I wrote in cafés for years until my arms began to ache from shoulder to wrist. In my studio I have an ergonomic chair and a foot rest and a display screen at the right height.

“Writing is physical work,” I remember my supervisor telling me, when I first started Masters. “You have to take breaks. Get massages.”

I remembered her words mostly when I’d been working for 8 hours, and hadn’t taken a break, and pain was radiating down my arms. She also told me that writing memoir is emotional work. But she didn’t have any advice for emotional ergonomics.

Towards the end of my thesis, every time I sat down to write, I’d cry. I was writing about living between the gender binary, and I’d come across Judith Butler’s essay on David Reimer, ‘Doing Justice to Someone.’ The someone is David: a person who was assigned male at birth, but lost his penis in a medical accident as an infant. He was then raised as a girl under the guidance of an experimental gender researcher called John Money. ‘Brenda’ as David was renamed, later rejected this assignment, and transitioned back to live as a man. Butler argues in this essay that David inaugurates a self that is beyond the binary by speaking about himself, at “the limits of intelligibility”. I loved Butler’s words, but more than that, I loved Reimer’s words. “If that’s all they think of me, that they justify my worth by what’s between my legs, then I gotta be a complete loser.” David knew he wasn’t a loser. Reading that, I knew that I wasn’t either. We were fighters.

And then, I Googled Reimer and I found out that he’d taken his own life. And I couldn’t write. For weeks. I was grieving.

I realised I was grieving for myself as well. And I started to think… Is it the journey through public space from my home to my studio that’s dangerous? Or is it what I have to face when I get there?

It’s the reckoning, of all those layers in my life, and all the lives that have been lost.

When I arrive in Melbourne city, I go straight to the State Library and sit in a café. I order soup du jour. I get out my laptop. I write about the stove. The words pour out and I try to catch them. The soup arrives. The soup goes cold. I wonder if anyone has been watching me. I haven’t looked up.

There’s an emotional cost in writing about the self. I didn’t know that before I started. There’s an emotional cost in choosing to grow my facial hair. People make you pay a toll. Maybe I pay in photographs of the stove. I pay in creeping anxiety when someone points a smartphone in my direction. I pay in wasted time, stuck in behavioural loops in my own apartment. And I wonder, is the cost too high? But the story mine calls me back. So I go to work. I know that down there, I’m golden. 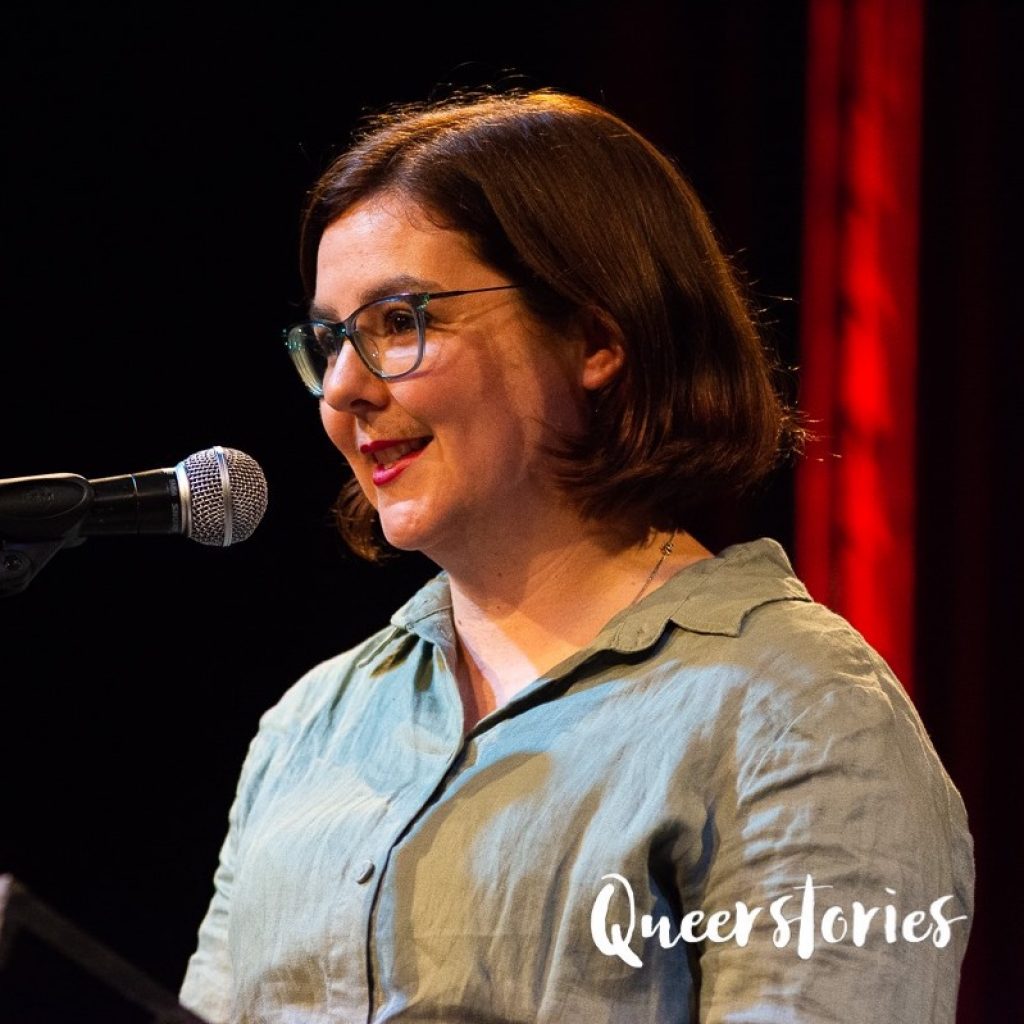