Bali shares a story about an intimate and life-changing experience: his first haircut.

Bali is the ultimate slashie – Actor, Producer, Director, Development Executive and Diversity Advisor for Australia’s theatre and screen industry. He is the Chair of MEAA’s Equity Diversity Committee and represents Australia’s professional actor community as an elected representative on MEAA’s National Performers Committee. He’s performed in theatres around the world, as well as on TV, he’s even been on Home & Away. 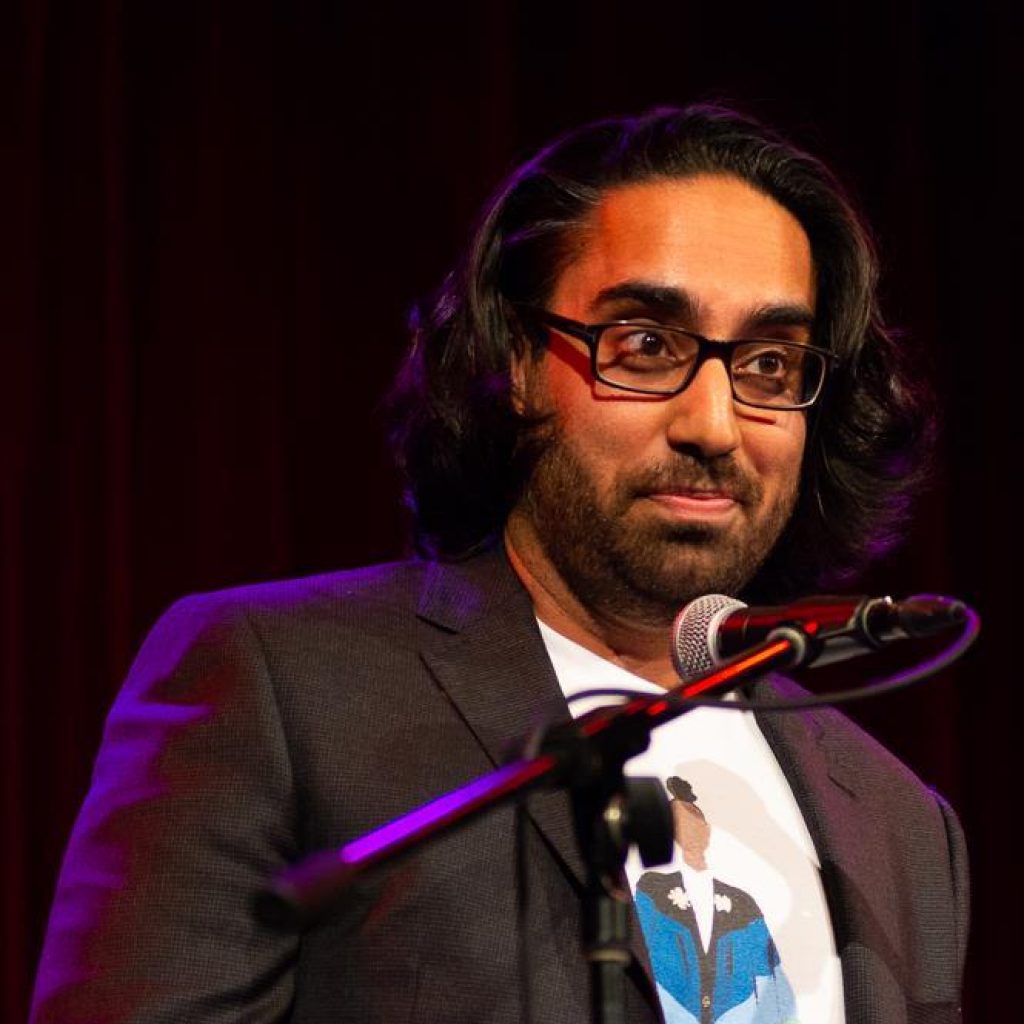 This week – Bali Padda is the ultimate slashie – Actor, Producer, Director, Development Executive and Diversity Advisor for Australia’s theatre and screen industry. He is the Chair of MEAA’s Equity Diversity Committee and is also part of their National Performers’ Committee. He’s performed in theatres around the world as well as on TV. He’s even played a hipster on Home & Away. Bali Padda.

I often wonder if people remember their first ever haircut. The excitement, yeah? The fear. The sharp objects flying deftly yet dangerously at your face, your money-maker. A random person intimately getting inside your personal space and severing literal fibres from your being. I used to work for one of Australia’s busiest hair salons. I would watch with fascination how the hairdressers would go from being the best friend of an elderly female Bondi resident to basically the Babadook terrorising young kids coming in for one of their first haircuts.

I watched the cutest kids wince in fear at sharp and shiny scissors that would glint under the halogen lights, like a sharp tooth glints in a cartoon wolf’s mouth whilst hunting a little pig. The terrifying “bzzzzzz” of hair clippers as the chattering and gnashing metal teeth are aimed at such delicate scalps. It’s frickin’ terrifying! Does anyone remember their first haircut?

I know what you’re thinking – “Fuck, was he raised by wolves? Wow. He turned out all right. How does he speak English so well?” That’s not my story.

My parents were migrants from Punjabi, Northern India, and practiced the Sikh faith. I know what you’re thinking, “How does he speak English so well?” You’re all fuckin’ racist.

One of the most conspicuous identifiers of the Sikh religion is the Pagg or the turban. The turban was traditional worn by royalty, so the last living Guru of Sikhism decreed that every Sikh wear a turban in a way of elevating people and championing equality. Everyone could be a king or queen. Yass, Queen! They didn’t say that back then.

They should’ve, right? Yeah. Under that turban is unshorn hair. The idea being that by keeping your body and hair the way God provides, you are honouring this gift and ultimately are closer to God. My dad is a Sikh priest, however, being the son of a religious leader wasn’t very remarkable. We were a normal family with our ups and downs, basically Brown Seventh Heaven.

Religion was an everyday part of our life in our family, yet it was never explained why we did that, why we practiced this faith. For me, I just couldn’t figure out what practicing religious meant. Regardless, I kept on with the optics of being a faithful Sikh, turban and all. In my early twenties I started to grapple with my personal identity. Yeah, gasp, surprise. What did my parents’ culture mean to me? Could I carry that with me heading out to parties on Saturday nights in city pubs and bars, being told to, “Take your hat off!” by dero bouncers, feeling like a total outsider on my visits to Oxford Street. Where did I fit in?

I reckon my dad began to sense this, and he started to present me with literature and textbooks about Sikhism. I politely… I think I was polite, but try being a gay Indian boy from Blacktown, you know, having a major identity crisis. I’m sure I was a major turd burger to my parents; my dad, mostly. I politely declined the textbooks, and gave the non-committal grunt, indicating that I’ll come and find them later.

Through a lot of work on myself, things came to a head, a turban-clad head, and I realised I was ready to make a choice about religion being a part of my life. I asked my big brother for advice on how to approach my parents about what was on my mind, and he suggested that I take it upon myself to do the research to really understand the religion and maybe become inspired. I approached my dad one morning, asking for those textbooks. His face lit up. He was so proud. But, oh, boy, little did he know he was providing me with the ammunition for my machine gun of disappointment.

After said-researching, I found my answer and made my tentative approach to my dad. We chatted for about two hours, and eventually he told me that he would be disappointed, but ultimately supported my choice and loved me no matter what. I know.

Fast forward a few months later, and I’m sitting with my friends Rhys and Steve, in an Irish pub in New York, still with a metre or so of hair wrapped up in a turban. So much for the big snip. It wasn’t that easy, it turns out. I feared losing a part of me and my identity that I had with me for 24 years. I confessed that in all the circles I moved in, I was the only one with a turban. I was afraid of what would happen if I wasn’t the guy with the turban anymore. Stevie turns to me and says, “Bali, you’re not special because you have a turban. You are special, and you have a turban.” Fucking beautiful, hey? So, we all started crying into our pints of Guinness at that point.

We gather some composure and Rhys asks…

I don’t know… That’s not how she talks. I don’t know why I did it that way. Sorry, Rhys.

We’ll go back to neutral from here.

“It’s okay. But what now?” She provokes. I take a breath and consider.

“Give me two weeks. I need to call my family and tell them it’s happening. Can you guys come with me?”

And so, we all put a little note in our diaries – November 11th 2007, Bali’s makeover. In the lead up to the big day, I fretted over where to go for my haircut. You know, do I just go to a haphazard barber, you know, “Bzzzzz.” But I wanted special treatment. Come on, you know.

So, I started researching and found what seemed to be an amazing hair salon in the Village but they were fully booked! Argh! Dammit. So, not giving up, I called on the day and they had a cancellation at the end of the day. “Book me in,” I declare, and decided to be upfront about my situation. “So, I’ve got really long hair in a turban. Uh, I’ve never cut it and I don’t know what I want, so I’m really nervous.” The lovely guy explained with tremendous joy…

*Imitates feminine New York voice* “Great! This is going to be so much fun!”

I was relieved yet still apprehensive at that point. I had the last appointment of the day, around 6:30 that evening. We’d arrived early and I wasn’t ready to go in yet, so Rhys lit up a cigarette and struck up some non-triggering banter while we waited outside. Soon, I heard the door open and out walks the hairdresser, Sean, who also lights up a cigarette. Whilst taking in a drag… *Inhales* He looks over at Rhys, me, Stevie, then me. Exhales…

*Exhales and imitates Sean* “So, am I cutting your hair?”

*Inhales* “Am I going to hell for this?”

So, moments later, we’re inside the salon. The silence is super awkward. It’s really tense. I take a seat in the salon chair. The first time ever in my life. It’s well-oiled swivelling ability makes my descent into that leather pad very awkward. I look in the mirror and Sean is waiting patiently behind my chair. I begin undoing my turban and unravel my hair from its top knot – these days known as a man-bun – revealing a cascade of black hair down my back. And, we began.

I found myself sitting dead still in that chair for a good hour. I was terrified that if I moved my head at any given moment, I might find a pair of small scissors embedded in my face; my money-maker. So, in that chair I started to share my process of getting to this moment with Sean. You know, everyone asked all these questions: “Where are you from?” Blah, blah, blah.

“My dad is a Sikh priest, a leader in the global Sikh community, and there was no love lost in me doing this.” And, by the end of my appointment, Sean confessed that his only other experience of a Sikh guy, cutting his hair, was a classmate in high school back in Canada, who cut off his hair without speaking to his parents and returned to school the next day with a black eye caused by his own father.

*Gasps heard from the audience*

Sharing my story with Sean allowed for an opportunity that my story was a new story for him that didn’t leave him with the experience of abuse and conflict, but love, honesty, and understanding. And, never has a haircut been as profound. So, ultimately disappointed since then.