Allan Clarke tells us a coming of age story with a twist. An eye opening tale of what it’s really like to grow up gay and Koori in the outback.

Allan is the presenter of The Point on NITV. He is also their investigative reporter and was formerly the Indigenous Affairs reporter for BuzzFeed News and ABC News’ Western Sydney reporter and a senior reporter for SBS television’s Living Black. 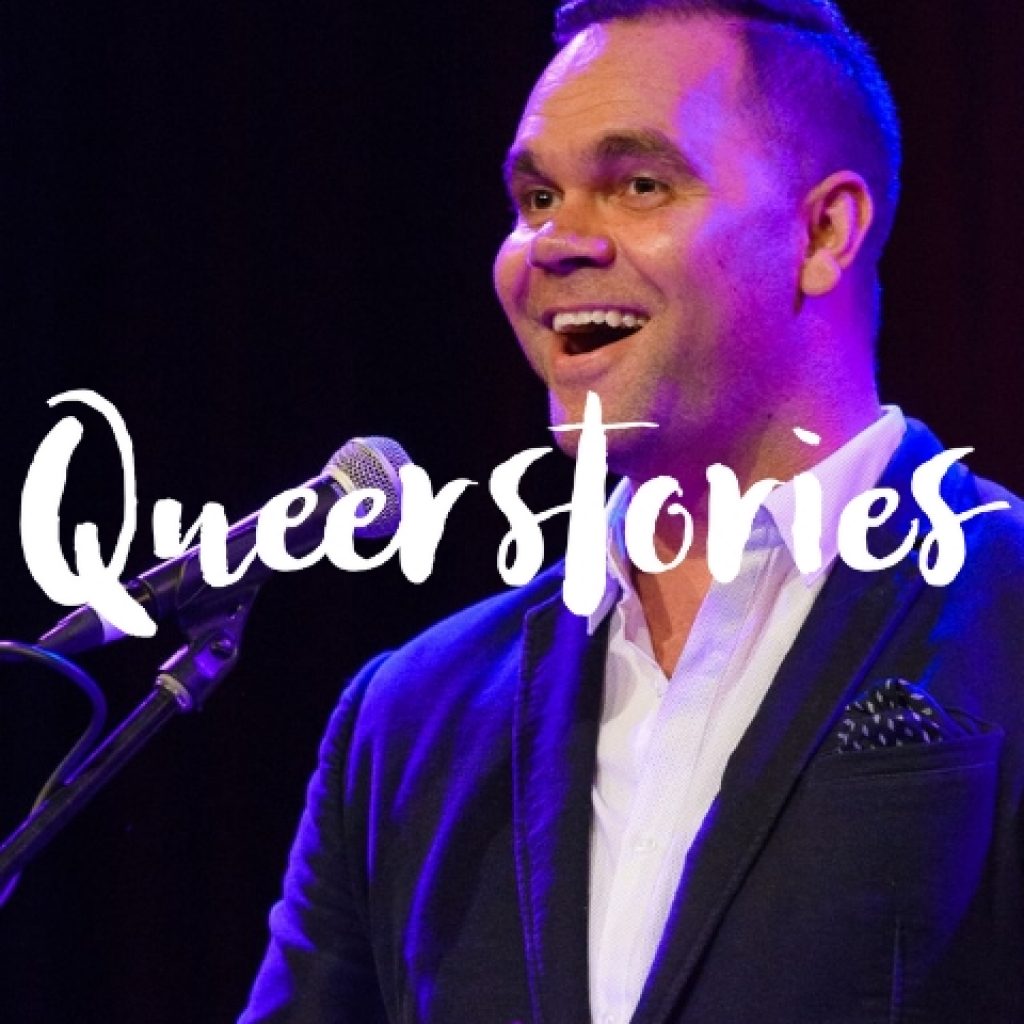 Hi I’m Maeve Marsden and you’re listening to Queerstories – the podcast for the monthly LGBTQIA storytelling night I run at Giant Dwarf in Redfern with support from the City of Sydney. This week – journalist Allan Clarke.

Hi everyone. Before I begin my little yarn I would like to acknowledge the traditional owners of the country that we’re gathered on today.. Always was always will be Gadigal land — I pay my respects to their elders past and present …. who have been telling stories on this land since time immemorial so I am privileged to stand here and tell a story on their land. Though it might be a different story from the ones they used to tell.

So, as was mentioned, my name is Allan Clarke, I’m a Muruwari and a Gomeroi man from far western New South Wales.

I’m a journalist and some of you may have known some of my work for a little company called BuzzFeed… but I promise I won’t be doing the top 11 queer things Allan did tonight. You’re safe from the listicles.

I grew up in a place called Bourke – anyone heard of it? If you haven’t you might have heard of the lines ‘where the the crow flies backward, beyond the black stump’ and all that shit.. But seriously I did love growing up there. It’s a little blip of just over 3000 people swimming in a vast ocean of red dust – it’s hot… it’s small… it’s very very hetero – like shear a sheep and kill a wild pig straight. That’s how straight it was, or still is.

I have no doubt that no homo was invented by someone in a place like Bourke. I’m sure of it – Masc for Masc is not a siren call for muscle queens online — it’s actually a family motto. I mean it.

So in this environment in the 90’s I was a terribly shy Koori kid, tall, skinny (I don’t know what happened), awkward, holed up in my room listening to Alanis Morrisette’s Jagged Little Pill, I know I’m meant to be a lesbian, just dreaming of a way out.

I was so painfully shy that my mother would squeeze my hand really hard when she wanted me to talk to someone. She would actually take her nails and dig them into my palm and say “Say hello Allan”. Anyone with an Aboriginal mother knows exactly what I’m saying when we talk about the nails digging into the skin.

So I was shy because I was terrified of who I was… acutely aware that I was different from all the other kids AND as I became a teenager I became terrified of my urges.My thoughts about other boys.

I hated the things that I would feel while watching Queer Eye For The Straight Guy with the whole family – I would squirm uncomfortably and feel like an intense spotlight was burning into me in our little housing commission house on Meadows road. Unable to comment on the fashion, that was hard.

That word queer terrified me – it meant ridiculous and feminine  where I come from, often accompanied by the word Cat – which is Aboriginal slang for gay.It’s hard to say how deregority this was and how scared I was to be called this. It was very unique to Aboriginal communities.

There was one openly gay man in Bourke when I was growing up. He was a good bloke, everyone loved him but at the same time he always seemed to be the butt of their jokes. He would laugh along with them as they made a joke about bending over or giggle with the girls over a crass euphemism about taking up it the ass.

I thought at the time —I didn’t want to be the butt of the joke.. I wanted to be the one making the jokes.. He terrified me, I think it was because I was terrified of myself.

He was camp, openly gay. Being open about his sexuality meant that he was somehow one of the women in town – not one of those sheep shearing lotharios that swilled beer at the pub in blue singlets or one of the rugby legends like my father – the men I thought were normal.

Of course now I realize how fabulous he was. I wish I had spoken to him back then.

Back then in the 90s,and I’m talking deep 90s  like Vengaboys and Smash Hits magazine 90s, that’s as deep as you can go. I could never ever have imagined that I would be up here on this stage speaking openly as a gay Aboriginal man.

And certainly never would I have ever thought I would deliver a story on this very stage last year about tearing another boy’s foreskin at 16 in the bushland surrounding Bourke  while giving him a handy on 40 a degree day. Download that podcast — it’s a riot…sadly I’m not going to recount that today.

I had an epiphany when I delivered that thinking wow, as this little timid Koori boy in Bourke it would have shaken me to the core to think that I would be in Sydney talking to a full room about being gay.

I, along with most people here, know how difficult coming out is.

But believe me when I tell you that being queer and Aboriginal is a whole other ball game – not only do we have the normal homophobia of the world to contend with, but we also have a complex and often conflicting view on whether gay people existed in the Aboriginal community prior to colonisation —

Spoiler alert.. THEY DID.

You can thank those lovely white missionaries that came and took such good care of our mob… who instilled in our communities that homosexuality is wrong. Lovely people.

This toxic notion has poisoned many minds and hearts in our community and sadly today homophobia is common in my community – our elders bore the brunt of that propaganda, because they were children who were forced to lived under the bible instead of our ancient Aboriginal lore.

You think coming out as gay is hard.. Well, ALSO imagine being a young black boy who has been told all their life that their ancestors and loved ones who have passed on are always watching them. Always.

That makes having a cheeky wank late at night while watching Queer As Folk as a 15-year-old trying not to wake his grandmother in the other room a whole other nightmare. Queer As Folk, Ancestors…Take catholic guilt and multiply it by thousands of years.

But seriously, If I did have a black gay role model growing up  I wouldn’t have stayed in the closest so long, because when my mum finally confronted me as a 19 year old, after she found out I was visiting gay clubs in Sydney, it was ok – that’s because our kinship system and strong family network, meant I was loved and accepted – a beautiful ancient part of my culture wrapping around me like a  security blanket.

I am so proud to stand on this stage and say I’m queer, I’m also incredibly heartened to see several high profile Aboriginal people speak openly about their sexuality in the media.

It will save lives, I can guarantee you that.

But we still have high profile Aboriginal people sprouting toxic views.. A few years ago Aboriginal boxer Anthony Mundine was so enraged by a koori gay love story on the drama Redfern Now that he took to Twitter. Here’s what he said.

Watching Redfern Now and they promoting homosexuality! (Like it’s ok in our culture) that ain’t in our culture and our ancestors would have their head for it! Like my dad told me GOD made ADAM and EVE not Adam and Steve.

I was furious.. So many grammatical errors and erroneous use of CAPS…. Also what’s with the biblical reference? Anthony is Muslim.

But no seriously, this is man that many look up as a demi god in my community and it made so angry because it’s dangerous  for young Aboriginal people struggling with their sexuality to hear this from someone so powerful.

I did a story for ABC’s lateline on his comments and it cost me a few friendships… people who argued that I should be supportive of Anthony because he does so much for the community.

Well no, I don’t need to be.. the road to role model is paved with egotistical bigoted fuckwits. It’s time that my community stop kowtowing to homophobic fools.

If you call yourself a role model for our community then you have to support everyone – including our fabulous black queer community as well – because we all know the ancestors are always watching.