313 Gary Lonesborough – The Path to Sydney

Gary remembers the events that led him from the small country town where he grew up to the big city.

Gary Lonesborough is an award-winning Yuin writer, who grew up on the Far South Coast of NSW as part of a large and proud Aboriginal family. His debut YA novel, THE BOY FROM THE MISH, was published in February 2021, and was published by Scholastic in the U.S asREADY WHEN YOU ARE in March 2022.THE BOY FROM THE MISH has been shortlisted for numerous awards, winning the 2022 Booktopia FAB Award for Favourite Debut Book. 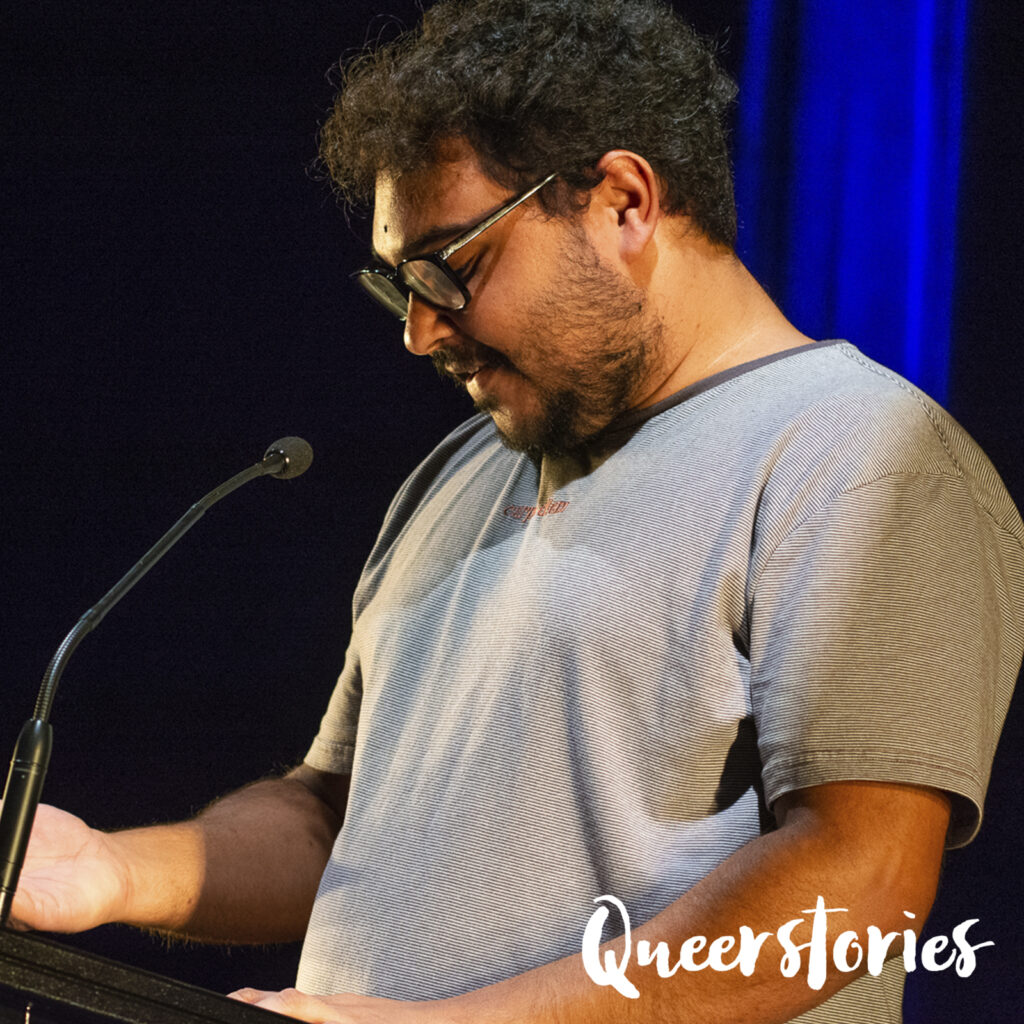 Maeve: Hi, I’m Maeve Marsden and you’re listening to Queerstories.This week,GaryLonesborough is an award-winning Yuin writer, who grew up on the Far South Coastof NSW as part of a large and proud Aboriginal family. His debut YA novel,THEBOY FROM THE MISH, was published in February 2021, and was published byScholastic in the U.S asREADY WHEN YOU AREin March 2022.THE BOY FROMTHE MISHhas been shortlisted for numerous awards, winning the 2022 BooktopiaFAB Award for Favourite Debut Book.Garyperformed this story at Blacktown ArtsCentre as part of Kolour Me Kweer an all First Nations line up curated by StevenLindsay Ross and hosted by Neville Williams Boney.

Gary: It was a chilly, September morning. The mist lingered on the mountains beyond Bega. Grey clouds rolled overhead, and at seven o’clock in the morning, I was wearing a Star Wars clone trooper costume, helmet and all, already three drinks in and quickly getting tipsy as I arrived at my mate’s house.

It was muck up day, and as history would remember it, the last real muck up day at Bega High School.

Ten or so of us gathered at my mate’s house. I was Captain Rex, a clone trooper from Star Wars. A couple of the boys had decided to cross dress, wearing miniskirts, tank tops with breast stuffings. There was a blow-up marshmallow man from Ghostbusters. There were pimps, a well endowed Albert Einstein, and people costumed as random fruits and vegetables. The music was blaring and my mate’s mum was not loving it at all. “It’s all good,” we said to her. “It’s muck up day.”

We did shots of vodka on the outdoor table, laughing with each other, amazed that we actually made it to this point – we’d done all of our high schooling. We’d finished year 12. All that was left was our HSC exams in a month’s time.

It’s fair to say I was drunk by the time we started heading to school just after eight. School was a short walk up the hill, but it was a steep hill.

As we walked, the thought came to me, drunken as it was, that I was doing something my mum and dad never got to do. I finished year twelve. I completed high school. I was setting an example for my younger siblings, for my younger cousins, for all those family members who knew my story, who knew what my parents and my siblings and me had been through. I was one of three Koori kids graduating that year, and I’m proud to say they were my cousins too. The weight of being a role model began to dawn on me, but it was muck up day, so it was my turn to take a break from being well behaved.

We marched in the school gates and headed to the oval. The chaos and havoc had already begun. It turned out, some of my classmates had broken into school overnight and released a whole bunch of grasshoppers around the place and sprayed silly sting.

Year seveners were being chased and shot with nerf bullets and water guns and pee-filled balloons. Fish sauce and soy sauce was sprayed around and the teachers kept telling us to behave.

We did our farewell march through the quadrangle, each coming onto the stage when our names were called and, shortly after the nine o’clock assembly, we were ordered off the school grounds.

Fuelled by alcohol and in our costumes, we flooded the streets of Bega. We rode in stray trolleys left around the place, got a bite from KFC, and yarned with strangers, until we ended up at the pub in town. Some of us were eighteen by this point, but some weren’t. We were all at the pub anyway. That’s when the real drinking began. Some of us blew some money on the pokies, some played pool, but mostly, we just sat around and talked, still drinking of course. It was a strange feeling, like the end of a book, or the end of an era.

With an extra buzz from a few more drinks, some of us walked back to school and tried to make it through the gates, but we were turned away. We found a few stragglers on our way back to the pub, drunken classmates who had wondered off on their own, and brought them back with us.

I went home as nightfall came. The hangover began to set in while I was still awake. I thought about my classmates. Some of us were heading into Trades, some off to Uni, some of us were staying in Bega.

The small seed began to grow in my mind that I knew I wanted to be a filmmaker, and maybe I should go to film school sooner rather than later. But I had a plan – to work for a few years, save up some money, then go to film school sometime in my twenties.

Well, over the next few months, my mum passed away and I lost a close friend to suicide. Those four little months were like sinking in black quicksand. It was dark, tough, testing. But the biggest thing that I realised during those dark months was that life really is short and the time to do what I wanted to do was now. So, I applied to Film school in Sydney and resigned from my traineeship in Aboriginal health.

At the end of January, I was at the pub again with my mates, drinking, yarning, taking photos, but this time, it was a real ending. The next morning, my family and I loaded all my things into the car and drove to Nowra. From there, an uncle with a Range Rover or something transported us to Sydney, where we unloaded my stuff at an Aunties house where I would be living for the next little while. I hugged my siblings and my dad, then they left, and suddenly, I was living in Sydney, on the floor of my cousins’ room in a little townhouse in Redfern, with an Aunty and Uncle I barely knew.

I had a week before my first day of film school, so I took longs walks through the city to familiarize myself. I took selfies at the Opera House, I walked across the harbour bridge and walked back. I took a ferry to Toronga Zoo and spent a whole day seeing the animals. I went to the aquarium and the wax museum. I went to the cinema on George Street and watched the Wolf of Wall Street on a screen bigger than I had ever seen in my life. I sat at Redfern oval and watched the Rabbitohs train and snapped some sneaky photos of Greg Inglis. I got offered Ice on the street, and a good time by some random woman.

I called my dad nearly every night and the distance from home was beginning to weigh on me, but at the same time, I was getting to know my aunty, my uncle, my cousins. We had dinner together every night. My aunty told me stories about my mum when she was little and it was beginning to feel like it was all going to work out.

Finally, my first day of film school arrived. I walked the fifteen minutes to the building. I was quiet, shy. I kept to myself as we were ushered into what I came to know as the Cinema room. I was scared. I felt out of my depth. I was beginning to think this was a mistake. I should go home, back to Bega, back to my family. I should get that traineeship back. I should work.

But as the day went on, I made friends with two Chinese guys and was eventually approached by a brown face. She introduced herself as Kelly, and said, “It’s good to see another blackfulla here.”

It’s something I’ve come to know well – I always feel more comfortable in a situation if there’s mob there. I got through that first day and I was excited. I was still quiet and shy, but I was following my dream. I was setting an example for my younger siblings, for those younger cousins back in Bega. I was doing something brave, scary, but it was something I knew I had to do.

I still called my dad nearly every night that year, because homesickness is strong, but that year turned out to be one of the best years of my life. I made lifelong friends, unforgettable memories, a lot of mistakes, and I made movies. I had taken the path to Sydney, and eight years and multiple share-houses later, I know I made the right decision to stay here. I’m still following my dreams.

Maeve: Thanks for listening! Check out queerstories.com.au for more episodes and please follow Queerstories on Facebook for news and event updates