Jinny-Jane realises there’s something that makes her different from her loved ones, and she finds a way to tell them.

Jinny-Jane Smith is a proud Wiradjuri/ Walbunja woman of the Yuin nation. Jinny identifies as a lesbian woman, mother and aunty to many. She is a dedicated advocate, giving her time to enhance communities, address social justice and self-determination for the betterment of community. Jinny is the Community Engagement Officer of BlaQ. She sits on the board of Gadigal information Service and City of Sydney advisory panel. 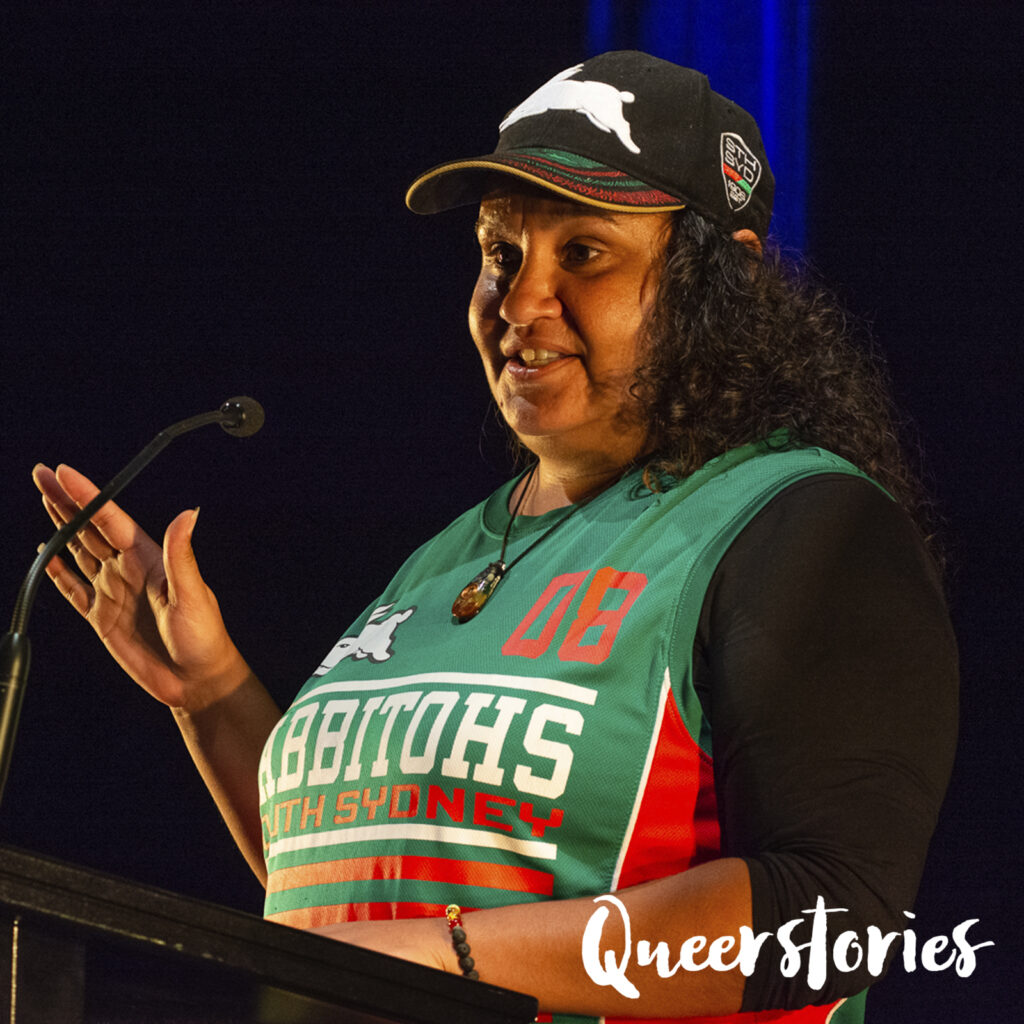 Maeve: Hi, I’m Maeve Marsden and you’re listening to Queerstories. This week, Jinny-Jane Smith is a proud Wiradjuri/ Walbunja woman of the Yuin nation. Jinny identifies as a lesbian woman, mother and aunty to many. She is a dedicated advocate, giving her time to enhance communities, address social justice and self-determination for the betterment of community. Jinny is the Community Engagement Officer of BlaQ. She sits on the board of Gadigal information Service and City of Sydney advisory panel. She performed this story at Blacktown Arts Centre as part of Kolour Me Kweer an all First Nations line up curated by Steven Lindsay Ross and hosted by Neville Williams Boney.

Jinny: I’m only an actors daughter, not an actor

This true yarn I wanna share is not so much a coming out story its more of a “jumping the fence” yarn.

It was back in the mid-late 80’s early 90’s NRL just became a regular Friday night thing! I was a little daddy’s girl and loved spending any and every chance I could with him! So Friday night would roll around and we would all get ready as a family to sit up and watch the footy together. Dad’s first cousin, my uncle is Andrew Walker! For those of you who don’t know who he is, he is one of very few if not the ONLY Aboriginal duel sport Australian representative. Which basically means he played two different sports for Australia! He is a big deal? He played rugby union and rugby league for Australia.

So, back in the day I remember it clearly our little old house 28 Livingstone avenue, Dhurrak in mounty county big fibro house houso creamy white with brown trimming, big 4 bedroom house floorboards throughout, big long hallway loungeroom and dining room together, yeah deadly big family home! Straight across the road from Dawson public school where I spent more time being at after school hours then I did during school hours bless. Those were the good old days playing rounders with the mob, family verses family.

Yeah so, the whole family mum dad my two brothers and sister would sit up on the lounge waiting to watch the uncle play rugby league……… well here he comes, running out of the sheds with his red, white & blue jersey so, yes you guessed it he played for roosters (BLESS) it was the years when footy was a “REAL” tough sport. Bring back the biff!! I say

We were all cheering him on, when I realised, I was in love! This game is fucking awesome & I love it and I am not ashamed to admit it. I first realised this when I was a pre-teen but my passion grew, grew even more after another new season, through another new stupid rule, through the year of the “super league” (What were they thinking?) that’s them confused ones, bless them.

Any who back to the yarn, it’s now the early 2000’s, the era of the mounty county anthem that was produced by Montell Jordan (break out into song), shalalah lah this is how we do it, IN THE DRUITT!!! I done all the stupid teenage things, running amuck, running around taken on the world thinking I was the queen of mounty county you know that shirt or meme where it says I climbed Mt Druitt and survived? Well Jinny-Jane created that saying lol, nah true yarn I learnt some real good life lessons the best was though when I became a teen mum.

Being a mum made me treasure my childhood memories and just how special footy is and when it comes to family bonding! So I started to take my daughter to regular live games. The match between Roosters and Souths was always the game that me and daughter would have to be at! That game without a doubt I was there sometimes just taking anyone else’s kids with us to enjoy the banter and joy of screaming out did!! My younger brother is still very much a die-hard rooster supporter & as you get older more mob is added to the family. My brother/cousin inlaw is also a die-hard rooster supporter! Me, him & my brother would talk strategy, post-game matches and recruits, stupid “new rules” you know all things footy!

But now comes 2008 I realised who I really was deep down inside I think I always knew just exactly what I truly was and it came time to tell the brothers. My younger brother was always going to be the hardest so I thought I would test the brother/cousin inlaw first. It was at his house in Batemans Bay where we would always be in his mancave “the garage” having a few beers and talking footy when I looked at him and said “brother I have to let you know something………. I I I have jumped the fence! Him: Yeah I know sis. Me: No brother I havent said it before. I have to tell you something? Him: What is it fuck ya? Me: Bra I jumped the fence, I now go for Souths! Him: Aww what the actual fuck! Well I’ll be fucked ay I never saw that one coming! You really have shocked me ay. Him: Well I’m happy for you sis, I will always love ya, we’ll see you on the field!

One of the hardest things I had to do ay.

Anywho, nothing has changed he still rings me up after a souths loss to dig in wounds. That grudge match between Souths & Roosters we give it to each other on social media or we just wont answer the phone if it rings lol

And you know how I was worried about the younger brother? Well he didn’t even bat a eyelid. He now has two kids a boy and a girl.

My nephew bless him has been brainwashed by his dad I say, cause he goes for rooters too. My sister inlaw and her mob are die-hard parra supporters so I always thought my niece had no chance but to go for either of those teams bless. So I was shocked when my sister inlaw tells me that my niece takes after me and goes for souths! So now I start getting them the footy gear, you know the Indigenous round jerseys aunty Jin is going all out on this stuff lol.

So because I am always big on creating those family time memories, for Christmas last year I got them both footy season memberships, I actually had to go into Sydney roosters head quarters to get my nephews because their website was stuffed, (but that’s a whole nother yarn bless) and my niece got the junior Souths membership with a whole heap of deadly stuff. So now we can go to the footy together and make some of our own deadly memories. Hopefully they don’t jump the fence later down the track? Even if they do I hope it isn’t as stressful for them as it was for me when I had to let the family know!