310 Chris Southcote – Oh, to be in the Netball Team

A coming of age tale, from junior school to a Catholic high school via more than a few netball courts.

Following a very, very long corporate career, Chris Southcote burst onto the comedy scene in 2020. He has since bagged gigs throughout Australia; he was a grand finalist in Sydney’s Comedy on Edge 2021, Queensland Raw Semi-Finalist 2021 and the Sunny Coast Festivals Laughable Runner Up 2021. At an age where he could quite possibly be hitting “mid life crisis” territory, he comes armed with years of stories to share; with an edge of bitter and a splash of sarcasm, he’s just a grumpy old queen trying to make sense of the world. Aren’t we all, Chris, aren’t we all. 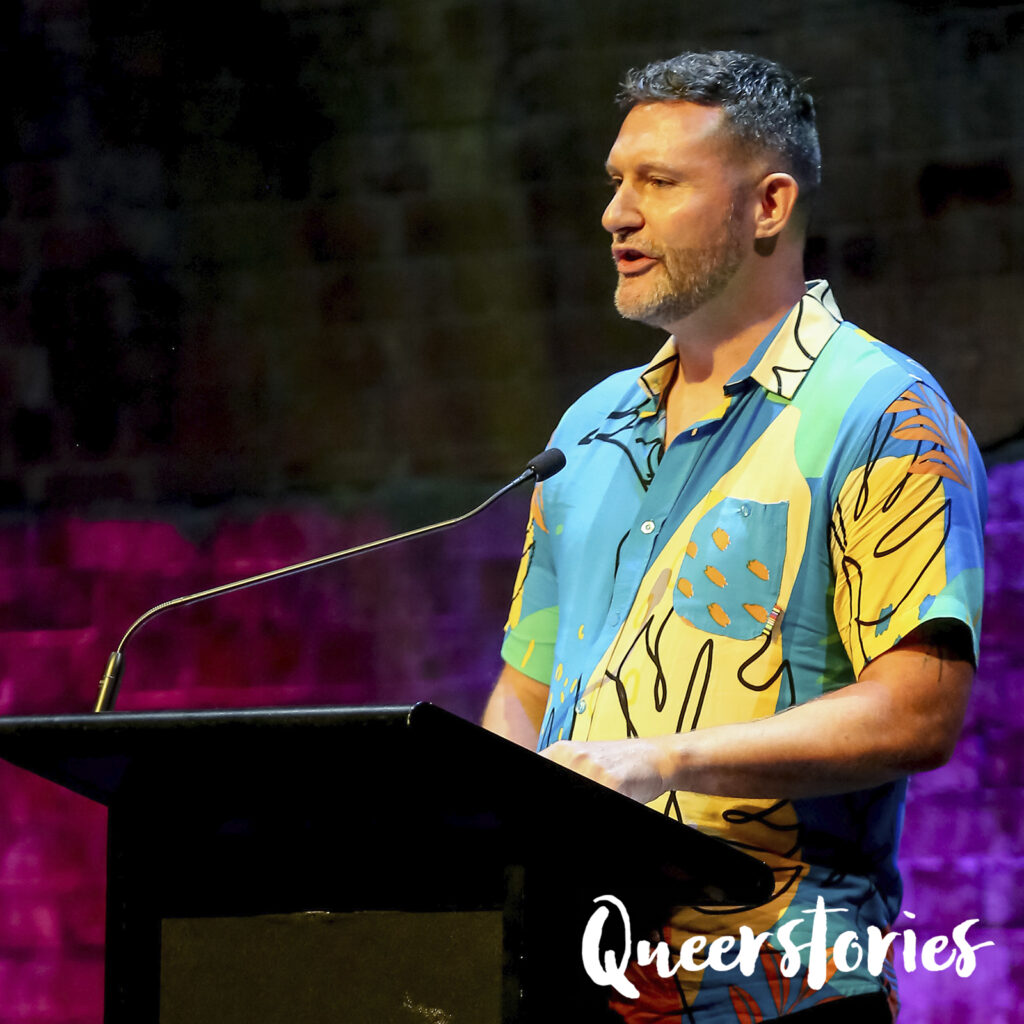 Following a very, very long corporate career, Chris Southcote burst onto the comedy scene in 2020. He has since bagged gigs throughout Australia; he was a grand finalist in Sydney’s Comedy on Edge 2021, Queensland Raw Semi-Finalist 2021 and the Sunny Coast Festivals Laughable Runner Up 2021. At an age where he could quite possibly be hitting “mid life crisis” territory, he comes armed with years of stories to share; with an edge of bitter and a splash of sarcasm, he’s just a grumpy old queen trying to make sense of the world. Aren’t we all, Chris, aren’t we all.

Chris: The summer between junior school and high school was the summer that kept on giving.  I was still carrying the puppy fat that my mother had been telling me I would grow into; she told me this in 1988; it was now 1994… how long does this fucking puppy fat last mum?? Along with my joyfully round belly, I received many other gifts that summer… a terrible bout of acne, an unpredictably weird voice and an acceptance of the fact that these strange feelings I had were in fact boy crushes.  Safe to say, I think I was pretty ill-prepared for the lions den that was high school.  Particularly as my main objective from day one, was to make it onto the netball team.

From an early age, I always just wanted to hang around with the girls.  My dad thought I was quite the Casanova, befriending all the girls in the neighbourhood.  Little did he know that I was way too emotionally intelligent for the boys; I thrived way more on plaiting the hair of my little ponies and planning our next musical adventure; we were always wanting to put on a show, and I always, ALWAYS, had to be the lead. This was much more fun than rolling around in the dirt and playing football with the smelly boys. Yucky. I would go riding my bike visiting my friends, with my big, oversized handlebars and rainbow streamers, wearing my huge sunglasses reminiscent of Marilyn Monroe in her prime, who the fuck did I think I was. Rainbows blowing in the wind singing my own rendition of “I should be so lucky” or “the locomotion” depending on my mood.  My brothers used to say to me “you’re such a girl”, trés original bro, trés original. Little did they know that I always took that as a compliment; all I ever wanted to be was a strong independent woman who could be in the netball team.

The junior school I was in didn’t have enough girls who wanted to play netball, so they needed some boys to fill in. All my friends, all 3 of them, were in the squad, so before the teacher could even finish her sentence, I harped up “Yes, I’ll be in the team, and I’ll be Goal Attack please”.  For those of you that aren’t budding netball fans, goal attack is probably the most assertive, sought after position; GA as it is referred to, commands the court, GA is the key attack position who is also able to revel in the glory of shooting goals, GA is often the star of the show, the spotlight.  For those who do know netball, I can hear your whispers “I knew he was gunna be goal attack”.  And to you I say, fuck off, it’s not my fault you were wing defence.

Our junior school netball team was quite the team.  We were always top of the league and used to think that we were the bees knees of netball, the mean girls of the junior league.  On reflection, no one in the team was taller than four foot and a fart so it must have been a painfully slow and tedious spectator sport; probably why my mum used to take a rain check on coming to watch.  But being the cream of the crop, we had no doubt that we would carry this excellence on to high school and we dreamed together over the summer about the applause and celebrations that awaited us. I had visions of the leader of the rugby team carrying me around on his shoulders proudly wearing my netball bib as the crowds cheered in awe.

My first day of high school certainly didn’t meet these expectations.  I went to a catholic high school with the motto, “Together, we are the body of Christ”.  The uniform of gold and purple did nothing for my complexion and the gold clashed massively with the off blonde sun in spray that I had used to die my hair.

All my fellow junior netball players had moved on to our competitor school, and the unwritten rule was that they would need to be dead to me now. I was out on my own.

Day one. I walked into school with my oversized blazer and ugly fat tie and before I could utter a ‘hello’ to the first person who would make eye contact, I got shat on by a bird.  I did not see said bird, but I can assure you that I never hated anything that I had never set eyes on so much in my life.  It clearly was a very big bird evidenced by the destruction of my blazer, shirt and, not so concerningly, my ugly tie. The splashes in my sun-kissed hair and dribbles in my ear were less pleasant.  For the first two weeks’ at least, maybe even more, no one wanted to be my friend. I was simply known as the boy that got shat on.

Reputation damaged and ego bruised, I thought that a sure-fire way to rebuild my credibility (or cred as we called it then) would be to show off my netball skills.  The other kids would see my passion for the game, my lightening speed around the court, my ability to shoot hoops like they were going out of fashion… surely this was a fail proof plan.  I went along to the netball try outs the following Tuesday afternoon; as I arrived courtside wearing my pristine unused gym gear ready to get involved, I was greeted by the evil glare of the real mean girls. If looks could kill, and they were all so much fitter, bigger and slimmer than me too.  “You can’t play netball; it’s only girls in high school” they scowled.  My heart sank as the PE teacher came bouncing over with that annoying bounce, fake smile and loud voice that only PE teachers seem to have.  She pulled me aside; “I am afraid you can’t play in the netball team, it’s girls only in high school, it’s not like junior school.  I’ve let Mr Lloyd know though that you are going to be a wonderful asset to the basketball team so he’s expecting you”.  I didn’t want to play fucking basketball.  My dreams were shattered.

Pride beaten and bruised, I went along to the basketball trials.  My mum had brought me new trainers to try and cheer me up, and whilst I was so grateful of the gesture, she got me a pair of GOLAs which I already knew only us poor kids wore. I had to make do so I used white out to colour in the GOLA sign; I thought I had done a good job, but the vicious boys of the basketball team noticed in seconds.

I was shit at basketball, the worst and I didn’t want to interact with the boys, one because they saw me as the shit covered GOLA wearing netball reject, and two because I was scared one of them would be cute and I’d crush hard.

I took myself to the school chaplain that day… there was always a massive queue for the school chaplain, this friendly elderly nun who would welcome anyone to come to her with anything at all that they wanted to discuss.  Unfortunately for her, it was an unwritten rite of passage that everyone had to go to her and tell her that their fish had died with the mission that you couldn’t laugh as she would say “let us pray” as she blessed the dead fish.  One after another you would see the kids rolling out of the chaplain’s room in hysterics, “I can’t believe she prays for a fish”.

By the time I got to the chaplain, I could sense she was already planning the next fish prayer when I cried out, “I just want to be in the netball team and it’s not fair”.  I don’t know what I was expecting, what she was supposed to do or even if a prayer would help, but I had faith.  Sister Adrian simply said “you can’t be in the netball team son; that’s for the girls. Have you thought about playing a game with the boys?”.  Dreams shattered and heart broken I gave up on netball.
Until I got to Australia…. 28 years later I arrived on your shores and quickly realised that you folk are mad crazy on mixed netball.  This was my chance, my time to shine.  I pushed back the childhood trauma and ventured to a netball social in Sydney’s Moore Park.  I. Was. Terrible.  Worst netball player ever; I was quickly handed the wing defence bib, that’s if I wasn’t being subbed.

After all these years, it turns out I hate playing netball. It’s the worst. I never went back.  Moral of the story, never give up on your dreams, but get on with life all the same, because you might realise that your dream is a nightmare.