Aurelia St Clair is a German-Cameroonian comedian, writer, podcaster and dog mother who now calls Melbourne home. They were a part of the Comedy Up Late series, recorded in 2021 for Audible and are one of six playwrights chosen for Malthouse Theatre’s Besen Writers group in 2021. She’s currently a Hot Desk Fellow at the Wheeler Centre. Aurelia has performed at the Melbourne International Comedy Festival in 2018, 2019, 2021 and 2022, the Melbourne and Sydney Fringe Festivals in 2019 and the Brisbane Funny Fest. In 2020 she received the Stand Up! Grant, an initiative by the Andrews Labour Government to support up and coming comedians.

You can listen to Popgays, a Pop Culture Podcast for Postmodern Queers with Charlie Zangel, Jordan Barr and Aurelia St Clair here.

You can listen to another of Aurelia’s stories on the lockdown edition of the podcast I produced in 2020, here. 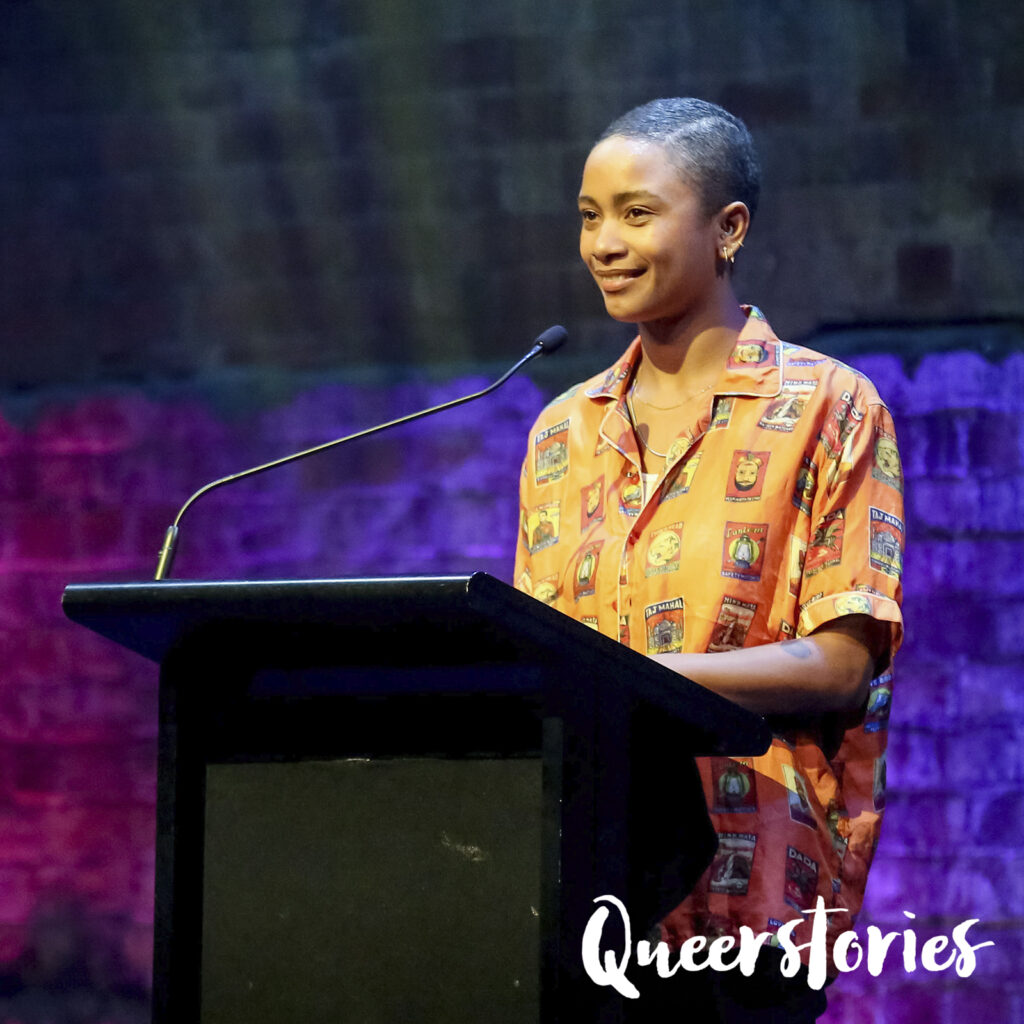 This week Aurelia St Clair is a comedian, writer, podcaster and dog mother who now calls Melbourne home. You can listen to another of Aurelia’s stories on the lockdown edition of the podcast that I produced in 2020, head to Queerstories.com.au and look them up. This story was performed at Brisbane Comedy Festival in 2022.

Aurelia: Hi! When you do stand up, people always want to know how did you get into stand up? They say things like, ‘wow, stand up. That’s so brave of you.’ And then they say, ‘where does your inspiration come from? How do you write? Are you going to turn this interaction into a joke?’ and often I do.

What people never ask me about is all the other jobs I work, and have worked in the past. The jobs that 98% of the time are responsible for the roof over my head and the avocado on my toast. And yes, this is often also the work I end up talking about in my stand up, and also the work that has hardened me enough to withstand the rejection, the long nights and the little pay that comes with being a stand up comedian. Thank you.

I’ll tell you a little bit about some of my first jobs. To set the scene it’s 2013 and I move to London. I’m shopping at the self-serve bakery section at a Sainsbury’s somewhere in central London, when two handsome, chiseled, model looking dudes approach me and ask me if I want to apply for a job at Hollister? If you missed the Abercrombie & Fitch / Hollister craze of the early 2010s, let me fill you in.

Imagine a dimly lit store where every hour on the hour a blonde, plaid shirt, denim clad, 20 something year old floor manager walks around spraying body spray into the air. The body spray fragrance is called California and it smells just like it sounds. Beachy pop music is playing loud enough so you can’t comfortably have a conversation. The staff are low key rude and they all look like the popular kids in school who bullied you in high school. But there’s more- not all staff here are created equal; there’s two levels: models, and impacts. Models work on the shop floor, pushing tall pieces of SoCal printed t-shirts an inch to this or that side. They’re comfortable telling you that their denim range stops at size 36, and that you won’t find a sweater in a size above L anywhere in this store ever. And teen populations beg their parents to buy them this American bs garb, because they think the brand is cool, and that working here is the best thing ever. And, like I said, then there’s “impacts”, the role I was hired into. Impacts work downstairs, in a fluro lit storeroom, pulling sweaters that retail for 48 pound upstairs while making 6.50 an hour and then running them up to the shop floor where they’re flying out the door. But this is where the fun is, anyways, because downstairs we get to gossip, we get to talk shit and we get to listen to the same HAIM remix 7 times in an hour. Then we talk about how ugly we think the clothes are, even though we all have to buy them with the little money we make and I think, thanks to that job at Hollister, I have no qualms at all about working in a dimly lit comedy room, where the music is way too loud, backstage gossip and obviously the worst playlist you’ve ever heard in your life.

Unfortunately for 2013 me, the 6 pound 50 an hour I was making at Hollister isn’t enough for me to make a living in London, so I also work as a fashion intern, usually pulling 7 days a week across my two jobs. My fashion internship boss is the fucking best. One night she invites me to come to a night a friend of hers is hosting at the Playboy Club in Mayfair. It’s October 3rd and its starting to get cold but I’m definitely wearing a short black skirt, black tights and boots with a 4 inch heel. I take the bus and then the tube and then I walk. The woman at the door at the Playboy club looks at my ID twice, because it’s only 4 days after my 18th birthday. ‘You have the same birthday as me’, she says. ‘But we’re 10 years apart. Libra twins.’ She smiles at me, probably thinking this is one of the first times I’m out since it’s only just days after my 18th birthday. But back then a lot of venues didn’t really check IDs as rigorously, and I’ve done this dozens of times by now. The weekend prior I was at a drag night in Shoreditch where the drag queen at the door simply asked me when my birthday was when I said I forgot my ID.

I smile at the Playboy Bunny door woman because I’m going to get so drunk on free drinks, and I’m very excited to see the bunnies. It’s obviously no surprise that every server at the Playboy Lounge is dressed as a bunny, and they are so pretty and tiny and red lipped. And I think, maybe I could work here. We meet my boss’ friends. I have no idea what we talk about… free drinks. And then I meet a guy who says he’s a writer and later I discover that he writes the type of books you gift to someone you don’t particularly know or like well. Like “The modern gentleman’s guide to cocktails”. He thinks this is impressive, and I’m young enough to agree. And just as he’s telling me about this, he exclaims ‘Hey, look over there! It’s Dennis Rodman!’ We turn around as inconspicuously as possible, as you can when you’re drunk and you’re hearing you’re in the same room as a basketball legend. For those queers of you, who may not know, Dennis Rodman played with the Chicago Bulls when they won 3 premierships in a row. Anyways, the writer says, ‘Go and ask him for a picture, because he’ll definitely say yes to a pretty girl.’ Well, ask and you shall receive. We speak to Dennis Rodman, he’s funny. He asks us how we’re doing, he’s riffing, he’s making us laugh. Everyone loves him, and we get our picture. He’s towering way above us but he slouches down so we’re all on the same level, and I’m mesmerised because Dennis Rodman is larger than life, and just as he’s made us laugh one last time, he turns around, the bunnies who really like him, all accompany him to some backstage area we don’t have access to. I make a mental note, to post the photo we all took together to instagram, probably with the Valencia filter. And that’s how I met Dennis Rodman. But when I think about that now, at the amount of time I used to spend at work and then partying, I just already feel so fucking tired. Which really prepared me for doing stand up comedy. I doubt I would have the charisma, uniqueness, nerve, talent, stamina or audacity to do stand up if I hadn’t worked these jobs. Since then I have actually worked in a suits store, as a house cleaner, at a Tesla dealership, a rightchair start up, as a nanny, and in a massage parlour but these are all stories for another Queerstories.

Thank you for having me.