Kirsty has an encounter with the Otway Panther…or does she?

Kirsty Webeck’s career has grown exponentially over the last few years. She’s a regular guest on ABC radio and in 2018, she was the featured comedian on an episode of The ABC’s “Tonightly With Tom Ballard.” In 2019, she toured regional WA with the Melbourne International Comedy Festival Roadshow, and opened for Joel Creasey at sold out shows at the Enmore Theatre in Sydney and The Astor Theatre in Perth. In 2020 she was seen MCing the comedy stage at Falls Festival Byron Bay, opening for Tom Gleeson at Bunbury Fringe, on Channel 10’s ‘How To Stay Married’ and as the host of the incredibly successful lockdown hit ‘Kirsty Webeck’s Zoom Comedy Hour.’

In 2021, among many other things, she appeared on 9GO’s popular sitcom ‘Metrosexual,’ Today Extra and The Project. So far in 2022, she’s nationally toured her immensely popular show ‘Silver Linings,’ appeared on the Opening Night Comedy Allstars Supershow, toured with Melbourne International Comedy Festival Roadshow, and performed at the Sydney and Perth Comedy Festivals’ opening night galas. Her 2022 television appearances have included SBS’ Celebrity Letters and Numbers, The ABC’s Question Everything, Just For Laughs on Channel 10 and The Project. She also hosted Women’s Agenda’s annual Women in Leadership Awards.

Her first comedy special ‘Silver Linings’ is on Paramount Plus. 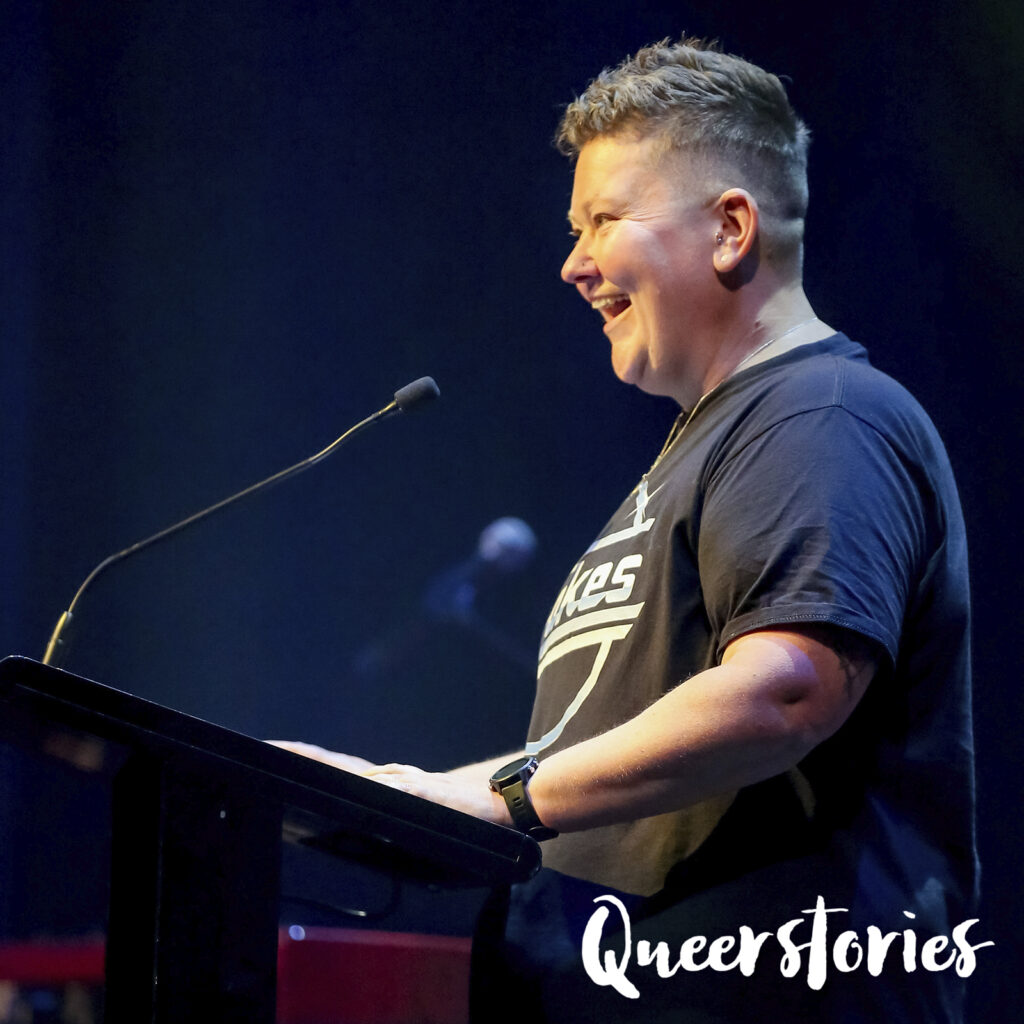 This week the delightful Kirsty Webeck is back with another tale, this one performed at Brisbane Comedy Festival in 2022. If you don’t know who Kirsty is, I’m not sure where you’ve been. She’s a national treasure. Enjoy!

Kirsty: The sunset was nearing completion over the cliffs next to which we were camping. A cheeky weekend away for the crew.

It was about 7 years ago. We’d packed more wine than food because we were still young enough that the hangovers weren’t ferocious yet. If we were planning this trip now, there’d be thermos’ for tea, a soda stream and some kind of blender for smoothies. We wouldn’t plan that trip now, though. That’s a bit of dramatic foreshadowing.

The shadows were growing longer. We’d started the fire and had settled into our camp chairs to tell stories and have a giggle. The drinks hadn’t started flowing yet. It’s important for you to remember that while you sift furiously through the rest of this information to make a judgment. They’re the default positions “how drunk were you?” “How high were you?”

We were half a drink in. Not a drug to be seen. Each and every one of us was still fit to drive a car. Except our mate Kelly, who shouldn’t be allowed to drive at all.

Our campsite was the very last one before the trailhead to some waterfalls. They’d strategically placed us there when we arrived and they heard our hysterical laughter and bottles clinking in our bags.

We’d opened up the snacks, put the drinks on ice and were settling in for the night when we heard the thuds. Boom, boom, boom. Massive thuds up the trail.

We all giggled nervously but decided the Tinder dating stories were far more pressing and got straight back into it.

“There it is again. Should we go look?”  It definitely would have been me who suggested taking a look. I act like I’m not scared in situations like that when generally I’m the most terrified. The problem is, my desire for a good story will always outweigh the sheer panic that washes over me when danger is afoot. “Might be good for a show.”

Half of the crew decided to go and have a look with me. The others generously volunteered to mind the campfire and the booze.

Two of my mates and I headed up the trail. It wasn’t quite properly dark yet but it was definitely heading towards the tail end of dusk. If you were a vampire it would have already been safe for you to be out and about but you might choose to wait a little bit longer just to be sure.

We walked about 300m up the trail. Not far at all. One of my mates was shining a torch around which definitely made everything a lot scarier. Sometimes I think the fear of the unknown is a lot easier to deal with than spotlighting something terrible. Do I need to see that monster centre stage? I mean, I know we were on the trail looking for the source of the sporadic thumping but did we really need to see it in full colour? I was happy with an outline.

We couldn’t see anything. We went to head back to our much wiser friends who had hopefully paused their stories of romantic misadventure when we heard more thumping from slightly further along the path. We’d come this far. There was nothing else to do but head toward the noise.

Up a little further we went. My mate swinging her torch around wildly, while my stomach twisted itself into knots. We walked up around a small bend in the trail and there it was. The source of the thumping.

It was two massive eastern grey kangaroos. Obviously. They’d been bounding through the bush together having a lovely time. They were truly, genuinely massive kangaroos. When we saw them, I think there was a collective sigh of relief mixed in with absolute terror. “Of course! It’s just a couple of big, old kangaroos.” But then, “my God. It’s just a couple of REALLY BIG, OLD KANGAROOS.” They were big enough that our proximity to them suddenly felt very problematic.  There was another problem, too. The kangaroos weren’t alone.

We all stopped in our tracks looking at the kangaroos and their third wheel. Then we sort of slowly reversed back down the path before turning around and heading back to the rest of our friends.

“It was just a couple of kangaroos.”

Hours passed. There was no way I was ever going to bring up what I saw on the trail but I was also absolutely adamant that someone went to the toilet block with me every time I made my way across to it. A bit rattled? Absolutely.

Just as someone was starting to suss out if anyone else was keen to get to bed, one of my mates who had come up the path leaned over to me and whispered, “Did you see something else with the kangaroos?”

“What did you see?” She asked.

“I dunno.” I whispered back.

I knew what I’d seen, though.

She stared me right in the eyes and I said, “I saw a panther.”

The Otway Panther is rumoured to wander The Great Otway National Park which is around The Great Ocean Road in Victoria. Of course the vast majority of people are sceptical, while others are completely convinced it exists but of course, are yet to get a clear, undeniable photo. Sceptics insist the sightings are simply feral cats. If it was a feral cat we saw that day, it was a jet black feral cat, that weighed about 70kgs and did not seem out of place with two massive kangaroos.

I believe I saw The Otway Panther enough that I’m telling the story to you today, despite the fact in your hearts, you will all be saying “Kirsty Webeck needs glasses.”

I also will fiercely defend all of your right to be certain that this story is completely fabricated. I’ve just told you I saw a panther in Victoria flanked by its two large kangaroo friends. It’s both my favourite story in the world and my least favourite story in the world. It’s my favourite because it’s pretty rad that I saw a panther in the wild and it’s my least favourite because no one on this planet will ever believe me apart from my mates I was with at the time. That’s the funny bit, too, though.

Knowing no one believes something that I believe completely but that’s OK. Sometimes it’s nice to just have something to yourself.

Maeve: Thanks for listening. Check out Queerstories.com.au for more episodes and please follow Queerstories on Facebook for news and advent updates.