Jeremy’s parents keep asking him, “Jerms! What do you want to be when you grow up?” Now in his twenties, he chronicles the way his answers change over time.

Jeremy Lloyd Santos is a first generation Filipino Australian Movement artist and Writer who’s intersections of Dance, Spoken Word & Mythology have provided pathways, platforms and perspectives for him to explore and express his experiences and views as a Queer millennial of the Asian Diaspora living with HIV. His professional practice spans the past 11 years with a stream of projects, works and jobs across the commercial, contemporary, film and theatre worlds. 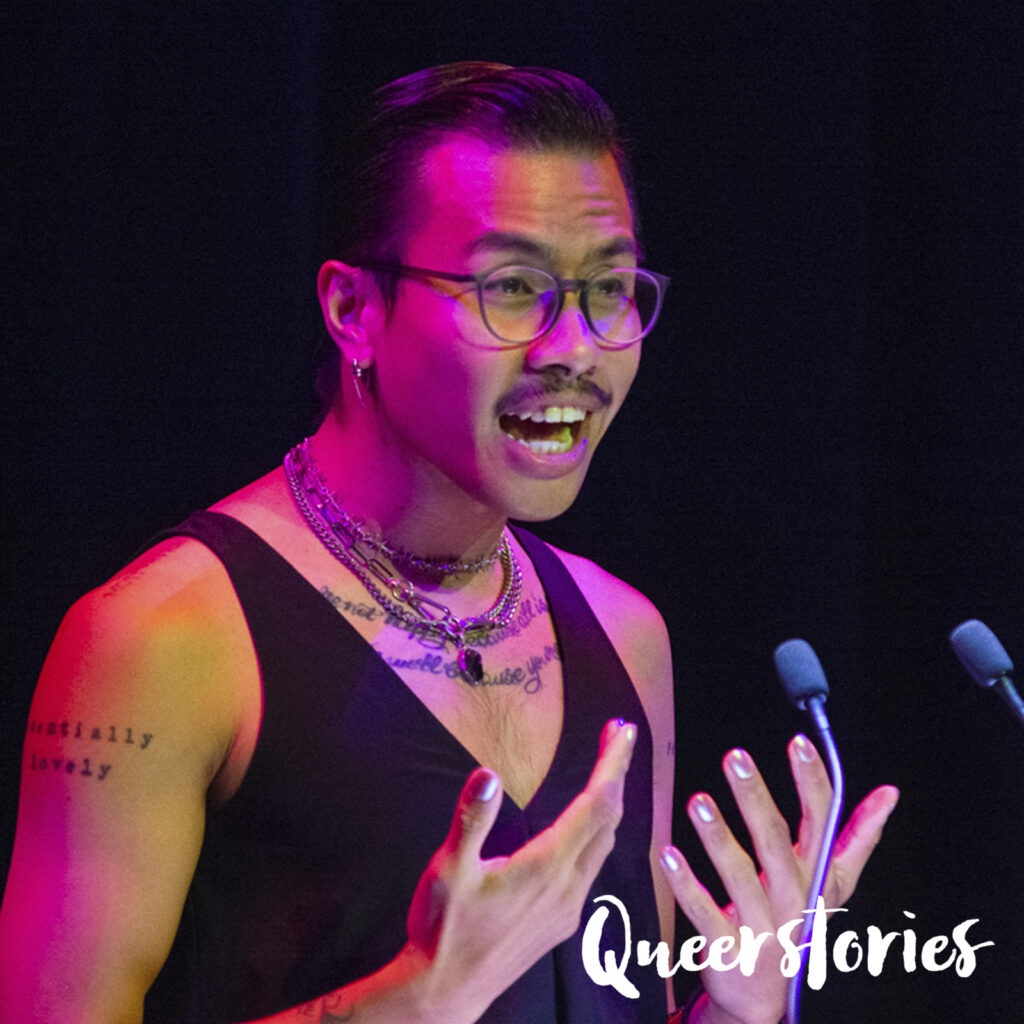 Jeremy: So the year is 1999. My age at the time? Six. My family and I were down in Canberra for the Summer Holidays. I vaguely remember my Osh Kosh B’gosh overalls, a large miniature city with teeny tiny people, and crying because I wanted to try the Guillotine at Questacon but my mum wouldn’t allow me. My sister says she eventually got mum to cave but according to her I cried because I thought it would stuff up on me and I didn’t want to die by Guillotine. Anyway, there is a VHS video of this specific family trip and in it we are in the parking lot at the Royal Australian Mint. I’m not sure whether we were about to go in or we had just finished and were leaving but clearly this place where money, value and worth was manufactured compelled my mother to ask me a question which she captured on film. “Jerms!” – Jeremy is my name, but Jerms has always been my family nickname – “Jerms! What do you want to be when you grow up?”

So back to the parking lot in the Mint, my mum is recording me and asks “Jerms! What do you want to be when you grow up?” and I, no joke, look down the barrel of the camera and say. “I want to be a Librarian.” My eldest sister bursts out laughing and so does my mum in a very “Oh sweetie… that’s adorable” kind of way and I remember being truly confused and a bit disheartened by this reaction.

Earlier that year in May a movie by the name of ‘The Mummy’ came out starring Brendan Fraser as Rick, an absolute delish snack of a man who played the new Millennia incarnation of Indiana Jones. Playing opposite him was Rachel Weisz as Evelyn or Evie, a beautiful brainiac librarian/ who knew how to handle herself despite the distress of the fictional and mythological patriarchy. The film was a commercial success and was released to DVD in September. I watched it incessantly because mysterious attractive and dangerous men and strong smart beautiful female leads, what else does a young closeted nerdy queer need?

Evie was a badass mummy slaying Librarian who impressed and humbled a wildly adventurous and hot man – the logic was so sound in my mind.  Despite their bemusement, my parents supported this big dream of mine and bought me book after book which I devoured. They were hoping, wishing and expecting that their studious and scholastic child would fulfill their dream of being a Doctor.

Spoiler Alert, I am a Creative, an Artist, a Choreographer, Movement Director, Performer, Writer and Diversity & Inclusivity Liaison – all things that are, on the surface, quite far from the profession of a Doctor.

My parents sensed their investment in the local bookshop might pay off a few years later when they asked me, aged X,  “Jerms! What do you want to be when you grow up?”

A psychiatrist, a psychologist or a counselor, I replied. You see I went through a strong Emo Phase in my teen years which garnered the weekly check ins of the School Counselor. I wore band tee’s two sizes too small, had a fringe that covered half my face, sharpie on my nails, eyeliner smudging my waterline and the sweetest most excitable spirit wrapped in Fall Out Boy, Taking Back Sunday & Panic! At the Disco bangers. They kept me warm and insulated in my top of the range closet I was yet to let people into. I’ve obviously moved on from that closet but don’t think I departed that essence or core of an Emo Kid. The styling may have changed but the intense emotions remained.

Another night, when I was X years old, I was doing Homework in the living room while my mother was watching A Current Affair. Their segment on the Australian of the Year sparked that all too familiar question. “Jerms, what do you want to be when you grow up?”

Without stopping my homework I answered… “A Linguist.” She paused to consider for a second before she asked “Oh… ah. Why?” I didn’t skip a beat. The words flowed strong and true “I just wish I could speak to people, but on their terms… you know?”. I remember feeling my mum’s eyes on me and not the television, she really looked at me for a hot moment as I scribbled away at some History and Geography worksheet before she returned to watching the news. I am the child of three Parents, two of whom are immigrants, the third being of the Asian Diaspora. My parents’ views and behaviours are the product of many circumstances before I was born though in large part were moulded or shaped by colonization. My ability to articulate and manipulate the English language as well as extricate meaning to challenge those who pontificate is a result of my need to assimilate into this western society despite my eastern roots.

I am twice separated from what makes me me, a queer brown person living with HIV, I navigate a disconnection to my culture as well as a hunger and yearning to learn of lineage and identity from my LGBTQIA+ community. This community would have had many more leaders, teachers, doctors, parents, families to teach me, impart to me, be a model for me if it weren’t for losing generations to an epidemic the world apparently still hasn’t learnt from.

I think if my mum were to ask me right now “Jerms, what do you want to be when you grow up?” I’d truly and honestly say… this. Me. This being standing here before you. I may not be a Librarian or a Linguist but I am a keeper and protector of stories and I work tirelessly to learn as many ways I can communicate and connect to people. I’m realizing how my infatuation for narrative and language were just markers and signposts pointing me to these moments where I can look back and see with such clarity how the journey I’ve been on has been leading me here, doing exactly what I’ve always wanted to do, doing exactly what I love. I suppose this is a story about stories, about how I will eventually grow old, but, to give a final response to my mother, I don’t think I’ll ever grow up.

Maeve: Thanks for listening. Check out queerstories.com.au for more episodes and please follow Queerstories on Facebook for news and event updates.