Fahad remembers what it took for his mother to finally meet one of his boyfriends.

Fahad Ali is a molecular biologist, science educator, and writer. He is a member of the Palestinian diaspora, a co-founder of the Queer Solidarity Film Festival and the Muslims for Marriage Equality campaign group, and a community advocate and organiser. He performed this piece at Riverside Theatres in Parramatta then again at the Sydney Opera House for All About Women. 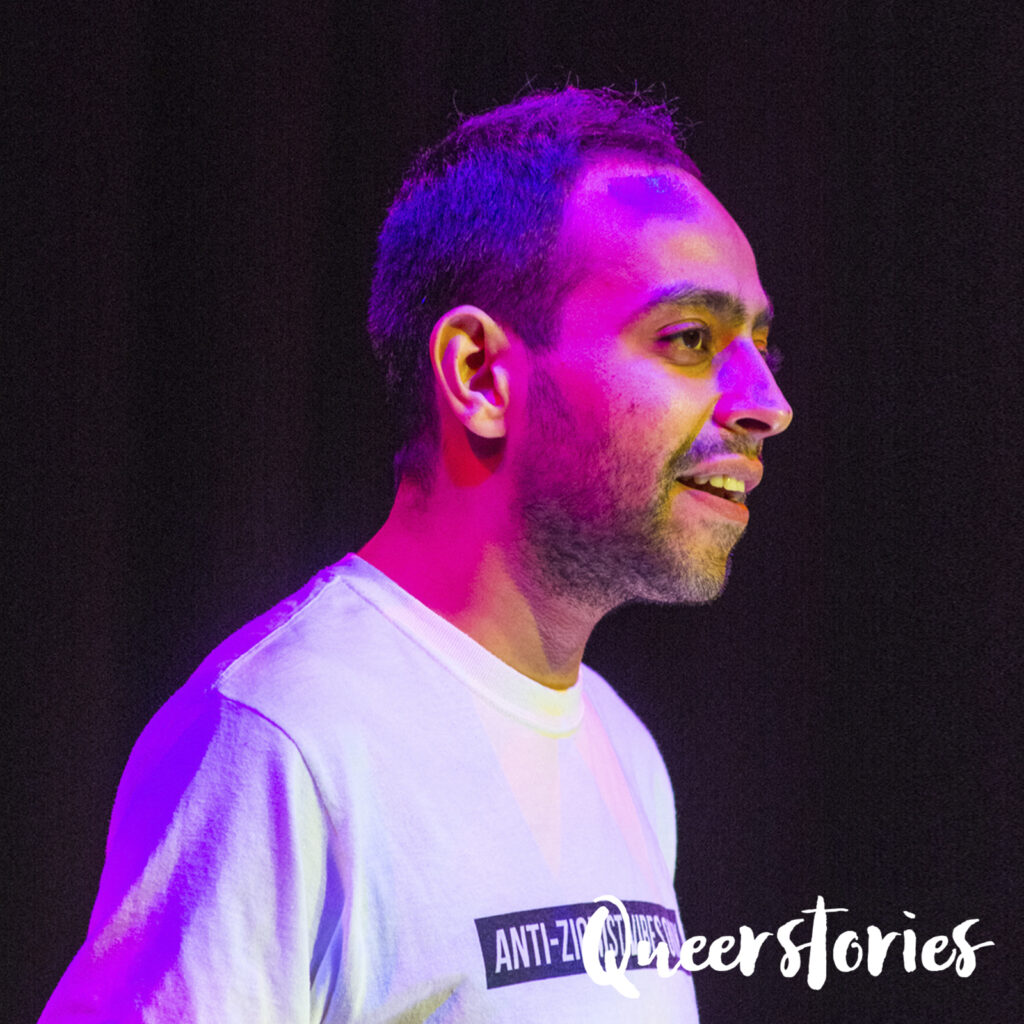 I don’t know when, or where, or even who to, but those are all minor details as far as I’m concerned. I’m going to have a wedding that is big, boisterous, and likely to get me in trouble with the law. The best part is that you’re all invited.

Ordinarily, this is every Arab parents’ dream. My mum and my aunts have been conspiring to find me a bride since I could talk. They obviously didn’t count on me wanting to be the bride myself.

I realised I was gay when I was 11. It happened in a single moment of revelation while watching Rage one afternoon. I took one look at Jesse McCartney shirtless and I knew I was a fag.

I kept this to myself until I was 17. When I came out to my mum, she burst into tears and told me: “you’re going to get AIDS and die”.

You can see where I get my sense of melodrama.

She would often tell me that all she wanted in life was to see me get married, start a family, and hold her grandchildren.

I wanted that too, it just couldn’t be with a woman. Mum would often try to bribe or coerce me into considering it as an option.

When I was growing up, my parents had a strict prohibition on dating, but the moment I came out they practically begged me to find a girlfriend.

And a few years ago, mum offered this pearl of wisdom: “You know there are plenty of gay guys out there who are married to women.

When my mum met my friend Caitlin, a ferociously intelligent PhD in literature, she tried to convince her to convert to Islam and marry me.

None of these attempts were very persuasive, I have to say. But good on her for trying.

I wanted nothing more than for her to accept me as I was. I would bring up the men I was dating from time to time, only to watch her mood sour.

I thought that this would last forever.

Mum was the sort of person who would prepare enough food to feed a village and then freeze most of it for perpetuity. We’re talking falafel, kibbeh, lentil soup, you name it. She had it all. I couldn’t visit her without taking home a week’s worth of meals.

One day, she told me: “I really want a chest freezer.”

It just so happened that my then boyfriend’s parents were moving house and were looking to get rid of a chest freezer. This was the perfect opportunity. I asked if it was still up for grabs, and then called my mum.

“Mama,” I said. “I’ve found you a chest freezer, and it’s yours for free. But… we’ve got to pick it up from my boyfriend’s place.”

I wasn’t sure how she’d react. What would she say? Would she lose the plot? Would she launch a pair of slippers at me?

I got my answer when she rocked up to my then boyfriend’s house in a ute.

A freezer led to a thaw in her opinions. I was so grateful for this. I wasn’t exactly sure why, and I still think about it from time to time.

I tried my best to prepare for it by giving my ex a little crash course on ethnic etiquette. “Remember, you’ve got to call her Auntie,” I repeated again and again. My brother had once introduced mum to a romantic interest, a lovely young woman, who made an unforgivable mistake: she called mum by her first name on their first meeting. The moment she was out of earshot, my mum told my brother: “I don’t want to see her again.”

Fortunately, my ex did a little better. I think my mum was expecting to meet some outrageous, glitter-doused fairy. She would often tell me I couldn’t possibly be gay because I was too masculine. I neglected to tell her that was also what I put down on my Grindr profile.

But instead of a fruity femme, she just met a beige middle class white boy. Whatever it was, she seemed to like him, and started to ask after him from time to time.

A few months later, she even came with us to the opening night of the Palestinian Film Festival. We saw a film called ‘It Must Be Heaven’, directed by the celebrated Palestinian filmmaker Elia Sulieman. It’s now one of my favourite films, but that first time I saw it with my mum, I didn’t know that it had a scene in a gay bar, and (to my knowledge) the only gay kiss ever depicted in mainstream Palestinian film. Hopefully it won’t be the last.

For as long as I’ve been out, I’ve felt the pressure on all sides: to be a good Muslim and to keep my sexuality to myself, or to cast off my Palestinian identity and remake myself in the image of a white twink.

On my 19th birthday, my friends took me to Arq. A drag queen on stage called up everyone who was celebrating a birthday. I was young, anxious, and didn’t want to be in the spotlight, but friends pushed me on stage against my will.

One by one the drag queen went through the line up, asking everyone their name. They were all some flavour of white: something like Patrick, Steve, John.

“Well, we aren’t going to bother with you, are we?”

Many of my early experiences in the gay community were the same. Was I really in need of liberation from family, religion, and homeland, if this is all I got in return?

And yet there’s a gay kiss in a mainstream Palestinian film.

And yet my mother let go of prejudice for the sake of love.

Mum died in August 2020, after a long battle with bowel cancer. She’ll never get to come to my wedding. I can only hope that she’d be happy for me, and that she’d love me for whoever I am, and whoever I become.

I yearn for my mother’s bread

And my mother’s coffee

And my mother’s touch

Childhood memories grow up in me

I love life with a passion because

If I were to die

I would be ashamed of my mother’s tears

Take me, if I come back one day

As a scarf for your eyelashes

And cover my bones with grass

Baptised by your footsteps

Bind us together with a lock your hair

With a thread that trails from the back of your dress

I could grow into godhood

If I but touch the depths of your heart

Set me, if I return

As fuel for your fire on your stove

And as a clothesline on the roof of your home

Without your daily blessings

I am too weak to stand

Give me back the stars of childhood

That I may chart the homeward quest

Back with the migrant birds,

Back to your waiting nest