Gary Lonesborough is a Yuin writer, who grew up on the Far South Coast of NSW as part of a large and proud Aboriginal family. Growing up a massive Kylie Minogue and North Queensland Cowboys fan, Gary was always writing as a child, and continued his creative journey when he moved to Sydney to study at film school. Gary has experience working in Aboriginal health, the disability sector (including experience working in the youth justice system) and the film industry, including working on the feature film adaptation of Jasper Jones. His debut YA novel, THE BOY FROM THE MISH, was published by Allen & Unwin in February 2021. 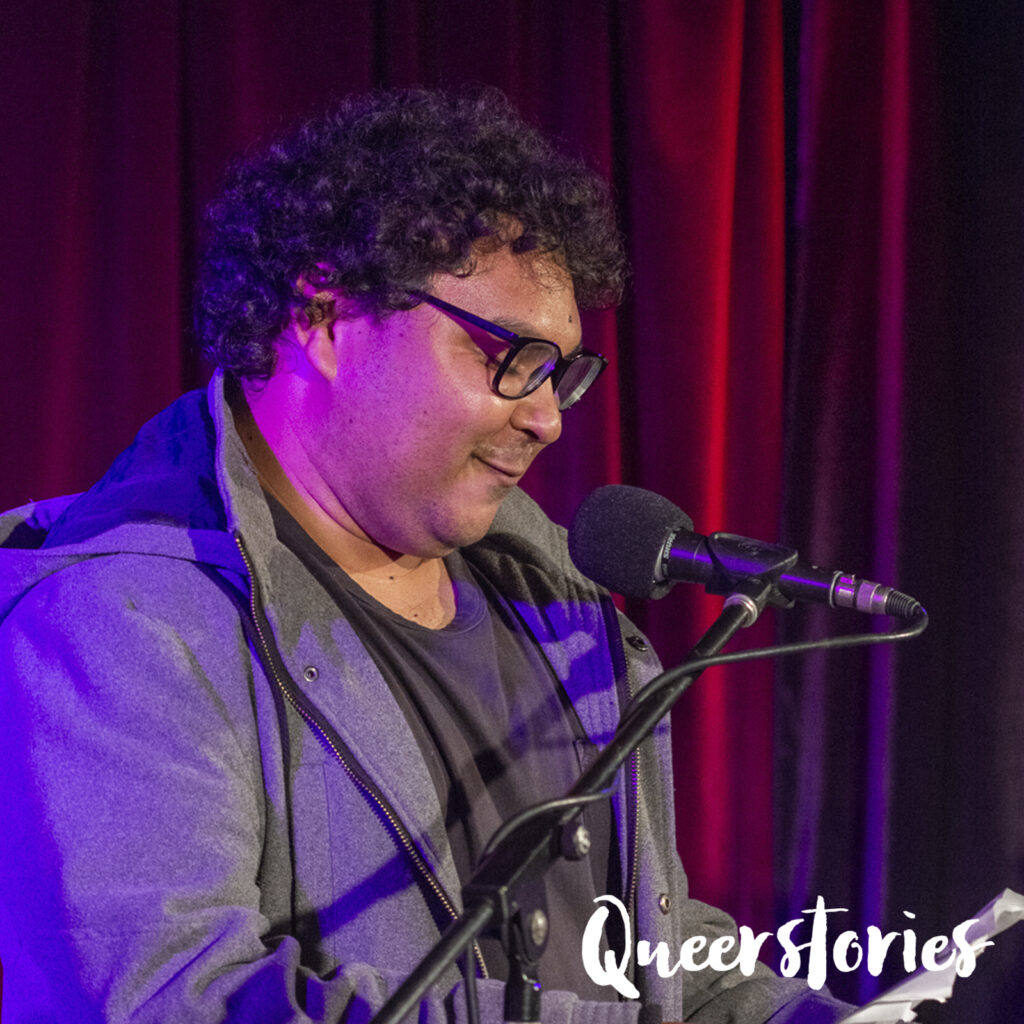 Maeve: Hi, I’m Maeve Marsden and you’re listening to Queerstories. This week Gary Lonesborough is a Yuin writer, who grew up on the Far South Coast of NSW as part of a large and proud Aboriginal family. Growing up a massive Kylie Minogue and North Queensland Cowboys fan, Gary was always writing as a child, and continued his creative journey when he moved to Sydney to study at film school. Gary has experience working in Aboriginal health, the disability sector (including experience working in the youth justice system) and the film industry, including working on the feature film adaptation of Jasper Jones. His debut YA novel, THE BOY FROM THE MISH, was published by Allen & Unwin in February 2021. He performed this story in June 2021 at Giant Dwarf in Sydney on Gadigal land.

Gary: Any Kylie Minogue fans in the house?

On national television, I was asked if I ever hid my love for Kylie Minogue when I was growing up, as to avoid suspicion or speculation about my sexuality. And in truth, I hid and avoided suspicion and speculation at every opportunity. I made sure I didn’t look at my male friends too long or in an admiring way. I joined in on the girl talk and I kissed and told to make sure people knew I was kissing girls. I made sure the clothes I bought and wore didn’t make me look gay. I made sure not to speak in that cliched, flamboyant way. But I was never ashamed of my love for Kylie. Loving Kylie was the only avenue I really had to express my sexuality, even if it was in a secretive and masked way. Kylie really helped closeted, teen Gary, and this is my love letter to Kylie Minogue.

Firstly, I love you, but not in that weird, creepy, mega-fan, stalky way. And I do hope that if you read this letter, you never ever talk to me about it because I would absolutely die if you did.

Every morning Facebook reminds me of my memories for that day each year, all the way back to when I created my Facebook account in 2009. And each morning, I spend at least ten minutes deleting those statuses, such as ‘Walking the streets of Bega by myself at midnight because I’m a ruthless bastard’, ‘like for a TBH’ and ‘Just saw Mr. Black coming out of Dan Murphy’s with 8 cases of James Boag’.

While I do spend time deleting my memories from Facebook each day, in March, Facebook reminded me that it was a particularly important two-year anniversary for me – the anniversary of when I went to my first Kylie Minogue concert in March 2019. You might not know this, Kylie, but while I’m a writer these days, I’m also a part-time unpaid Kylie Minogue promoter, and I’ve been converting people to your music for years, including the friend who enthusiastically came with me to see your concert in 2019.

I was so nervous that day. Like, proper nervous. I wasn’t even going to meet you or anything, but still, I couldn’t eat. Me and my friend got a drink before the concert, which helped settle my nerves, but as we walked the steps of the ICC in Darling Harbour I had this terrible feeling in my stomach like something bad was going to happen. I was sure there would be some reason the concert wouldn’t go ahead. In my worst fears, you had eaten some bad fish and chips at lunch that day, you were battling bad diarrhea backstage and would need to cancel.

Luckily, nothing went wrong. We walked into the massive theatre and found our seats. The preshow was flawless, then the time came for the lights to dim. There was a really beautiful backdrop to the stage, which was a sun rising over a desert landscape. Then, Kylie, you walked through the door and onto the stage and as the show began, tears came to my eyes.

From your walk onto the stage, to the laser-show that accompanied your performance of ‘Lost without you’, to me and my friend standing and dancing to ‘Better the devil you know’, two years on I still rank that night as one of the best nights of my life. Because, Kylie, when you walked onto the stage and the tears came to my eyes, I wasn’t the twenty-four year old Aboriginal man sitting in a theatre. I was once again the little nine year old Gary who asked his Dad to buy him Kylie’s Ultimate Kylie compilation album. I was the little Gary who studied the lyrics and learned every word to every song on that compilation album. I was the teen Gary who when he had his first night home alone, took off his pants and undies, still keeping on his shirt, and listened to your Aphrodite album from start to finish on the highest volume while dancing and singing the whole time.

Again, I’m not a weird, creepy, stalky mega-fan, but I’m constantly reminded of you through my Facebook memories, because even though I was really secretive and closeted about my queerness, I was an out and loud Kylie fan/promoter who posted about you regularly.

One of the first things people learned about me when they met me was that I was a Kylie fan. I knew that you were sort of seen as a gay icon or whatever, but I didn’t feel like people were associating me with that, even though I didn’t know any other straight Kylie fans or any Aboriginal Kylie fans.

And I always thought that I didn’t love you because I was queer – I loved you because of your music, your persona, your performances, the light that beams from your heart in every interview you give, the way you express yourself, the costumes, the hot pants, the way I thought you were hypnotizing me when I first listened to your song, ‘Confide in me’.

Kylie, I remember after seeing you in concert, I said to my friend who came with me that I could have died happily right then, that I was completely fulfilled. Because when I experienced that concert, as I became little Gary with the albums and the naked dancing again, I also became the teen Gary didn’t know how to deal with the fact that he was gay. I became the teen Gary who hated that he wasn’t straight, that he wasn’t normal in the way he considered normal to be. I was the teen Gary who was sad most nights, who went to bed feeling uncertain and scared about his future. And as I sat there at your concert, listening to you belting out ‘The Loco-motion’, I remembered what teen Gary did on most of those nights when he was feeling sad and uncertain and scared: he listened to your songs – the music of Kylie Minogue.

To finish, here’s a quote from the chorus of ‘Kiss me once’, which really reflects how you helped me, and gave me strength when I was a teen:

‘Me and you, baby we made it through’.