Raised on American culture, AJ trades in the high-rises of his council estate for the rolling hills
of the Bay Area and the cramped, densely populated ends of London for the seemingly never-ending mansions of campus life.

Making the NSW Raw Comedy State Finals in 2020, AJ Lamarque has written for a number of TV productions (currently being developed), and has appeared on podcasts such as Wax Quizzical, Dungeons & Drag Queers, and I Speak Giant as well as being a regular contributor for Justin Hamilton’s Big Squid series. You may have seen AJ at The Comedy Store, the Sydney Comedy Festival Showcase and Best of the Fest shows, The Comedy Lounge, PAXAUS and Comic Con, just to name a few. 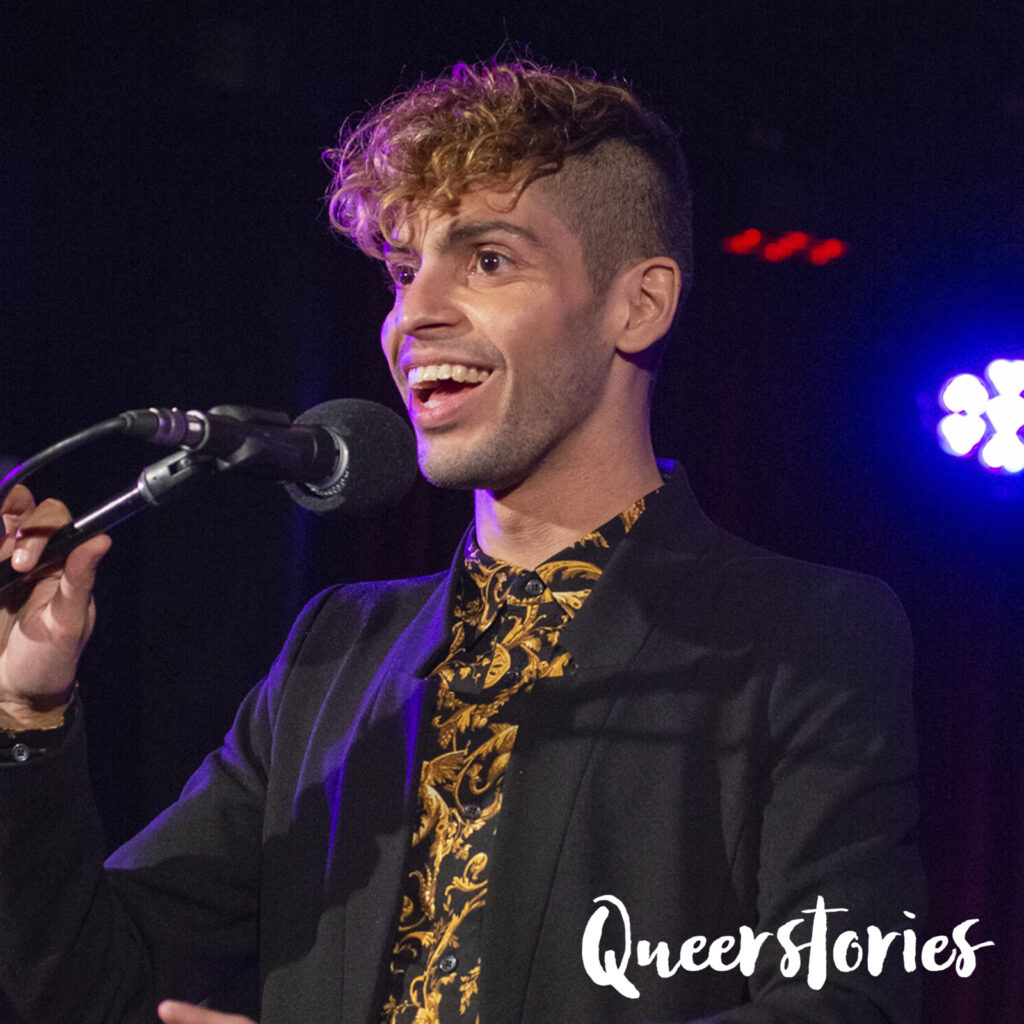 Maeve: Hi, I’m Maeve Marsden and you’re listening to Queerstories. This week making the NSW Raw Comedy State Finals in 2020, AJ Lamarque has written for a number of TV productions (currently being developed), and has appeared on podcasts such as Wax Quizzical, Dungeons & Drag Queers, and I Speak Giant as well as being a regular contributor for Justin Hamilton’s Big Squid series. You may have seen AJ at The Comedy Store, the Sydney Comedy Festival Showcase and Best of the Fest shows, The Comedy Lounge, PAXAUS and Comic Con, just to name a few. Enjoy.

In mid-2012 I was having a shit time. Not in an emotional way, in quite a literal way. I had recently had my first sexual experience, got an STI and the resulting course of general antibiotics had destroyed my arsehole in a way that only a party gay returning from his annual trip to Mykonos could understand. One evening I was on the toilet shitting myself more than Scott Morrison’s publicist before a press conference when I received that fateful email. Dear AJ Lamarque, congratulations, I am delighted to offer you admission to University of California, Berkeley.

As a kid of the 90s, I grew up on American TV & film. I’d absorbed all the tropes of the blockbusters, the cheerleaders, the nerds, the jocks but what had always resonated with me the most, like many people, was the narrative of the misfit struggling to fit in. See, I was a brown, gay, housing-commission kid who had spent much of his upbringing navigating loneliness. A loneliness due in part to my very feminine nature that left me excluded from the masculine-dominated world around me. But now, instead of just living vicariously through Hollywood actors finding a place where they belong, I was actually going to have a story of my own. This misfit was going to college! And who knew what type of film my journey would turn into. Maybe I’d begrudgingly audition for an Acapella group, realise I’m a natural born singer, rally the other misfits and go on to win state finals? Or maybe, despite my ditsy blonde demeanor, I’d prove my legal prowess because “isn’t the first cardinal rule of perm maintenance that you’re forbidden to wet your hair for at least 24 hours after getting a perm at the risk of deactivating the immonium thygocolate?” Or maybe, I’d embrace my inner-masculinity that had alluded me so far in life and just fuck a pie.

Whatever the case, even my unrelenting bowels couldn’t hinder my excitement.

7 months later, I swapped the high-rises of my council estate for the rolling hills of the Bay Area and the cramped, densely populated ends of London for the seemingly never-ending mansions of campus life. The first scene of my own American story had begun.

After settling in quickly, myself and my newly acquainted roommate went out to explore. But as most students couldn’t legally go out-out, the only evening activity at our disposal consisted of going door-to-door to different Fraternities and getting drunk instead. And the ensuing montage of scenes was everything the movies had promised. There was beer pong, keg stands, giant Greek letters adorning equally giant wooden doors, loose uni lads chanting drinking songs, sorority girls, bongs, and a naked guy passed out on the lawn.

The unique combination of being in a different country, shotgunning cheap beer and having an unexplained well-to-do British accent meant I ended up chatting with all these random Frat guys that night. I had spent most of childhood avoiding eye-contact with guys just in case they’d bash me, so the idea of being actual friends with a blokey-bloke was unimaginable. But to my surprise, the next morning I had text after text from different guys on my phone. Fred from Kappa Psi, Chad from Omega Alpha Epsilon, Brad from Nu Phone Who Dis. Somehow I managed to make friends… with men.

I spent that first week with one fraternity house in particular. We went to crazy golf, they introduced me to In-and-Out, they even invited me to their lucrative annual jelo stripper party. It was… an uncomfortable night… but on that Sunday they invited me to chill at their mansion of a house. When I arrived, I heard one of them call out for me from the library. Now the library was a room that could fit at least two flats from my estate easily. And the decadence of it all was borderline offensive. Everything was made from mahogany and intricately carved with detailed flourishings; the bookshelves, the boardroom table, even the 6ft bear sculpture that glared at you as you entered the room. My eyes drifted down to the 6 jocks sat on the opposite side of the table. They too were glaring at me when one of them asked me to sit down in a stern voice. Inside I started to panic, were these guys just messing with me? It would be cruel but not unexpected. Before my brain really had time to think, one of the guys slid an envelope across the table, I opened it hesitantly to read: “We cordially invite you to join the brotherhood of Alpha Kappa Alpha.”

It turns out, all these social excursions were a part of a process called being rushed, which is an unofficial series of interviews to see if someone is worthy of joining a fraternity’s brotherhood. Accepting the invitation would make me a “pledge” which essentially meant being subjected to booze-fueled dumb tasks for a semester to build comradery. So, they left me alone for 5 minutes to decide if I wanted to accept. My mind bounced around numerous reasons for and against, but ultimately, I had to find out more about this world. And, arguably more importantly, I had definitely seen the porn versions of this situation. And these guys were cute. If the worst thing to come out of this experience was getting to raw dog a straight Frat boy, I think I could live.

And so from council house to frat house, I began my journey into the world of man. First up, I was hooded and taken with the other pledges for our official initiation. After chanting and speeches, my hood was removed revealing a room entirely adorned with candles, everyone dressed in white robes and in the centre of the room a mahogany lectern, a bible-esc book, and a wax seal stick. One by one we went up to the lectern, swore a vow to the brotherhood, signed our names in the book and sealed the promise with wax. Everyone cheered, the lights were switched on and we played beer pong and got nauseatingly drunk.

A week later, we were asked to go to every sorority on campus to sing “What does the Fox Say” whilst they had dinner. After returning home, everyone cheered, we played beer pong and got nauseatingly drunk.

After that we were given buckets of paint, tiny paint brushes and sent out in the dead of night to paint one of the giant monuments on campus in the fraternity’s colours. When we got back, everyone cheered, we played beer pong and again got nauseatingly drunk.

There seemed to be a clear recurring theme that was testing the detoxification capabilities of my liver, and my understanding of what being accepted as a brother involved. I rarely remember actual conversations with these friendly guys outside of who could down a pint the quickest or who had the best beer pong wrist flick. Spoilers it was me, the limp-wristed gay.

No matter what topics of conversation I studied during the day to bring to the brothers at night, it all seemed to get lost in the games and the drinking sessions. Politics, British stereotypes, sports, memes, study, music, drugs, heterosexual sex, all of it seemed to fall flat. I still felt like I was on the outside looking in.

In the pursuit of my goal, I had barely realised that my time at Berkeley was coming to an end. The week before I left, the other pledges and I gathered in the hall one final time before we became equal brothers in the eyes of fraternity law. Ceremoniously chugging a beer from an 8-metre-long tube that ran from the roof all the way to the ground floor, we yet again celebrated our friendship through intoxication and shenanigans. On route from Frat house back to council house, I had time to reflect on my own American story. The masculinity-averse, foreign exchange student, thrown into one of the most cliche hyper-masculine environments was a strong plot, but did the misfit ever actually fit in?

Spending so much time with men in their world, trying to speak their language I still had this transient relationship with them. And it was in the many hours of self-reflection and fear of being the odd one out forever, that I realised that I was not the victim of exclusion from masculinity, but perhaps I was the initiator? These kind guys weren’t rejecting me at all, they were inviting and kind and even caring. But maybe I was rejecting them by trying to be something I wasn’t. Masculine. My character arc wasn’t about trying to fit in with them, but learning who I was on my own terms and maybe just allowing them to learn how to speak my language instead. It was the Hollywood film ending that I suppose was glaringly obvious from the start but as the active lead I never saw coming, because I was too focused on trying to crack the code of masculinity instead of just being me.

So, here’s to the brotherhood, the friendly guys and the uncountable litres of beer that enabled me to learn from the things that made me feel othered and scared, even when l was truly shitting myself.