285 Jex Lopez – From Surviving To Thriving

Jex shares a story about healing from trauma through therapy and music while working as a children’s performer in regional NSW.

Jex Lopez is mostly known amongst queers as a singer songwriting pianist. A vaudevillian cabaret noir artist, her music and style is intrinsically tied to her identity as a queer Latina Meztiça with Portuguese Indian heritage. Jex creates unconventional and elaborate costumes and projections to accompany her unique sound stories. She released her irreverent debut album ‘Playing Dead’ in 2018. She now works part time as a primary school music teacher and, since covid, spends a lot of time making visual art for her Lino print business JexCuts. Across all of her creative practice, she makes beauty from the shadows and finds theatre and joy where we could easily despair. 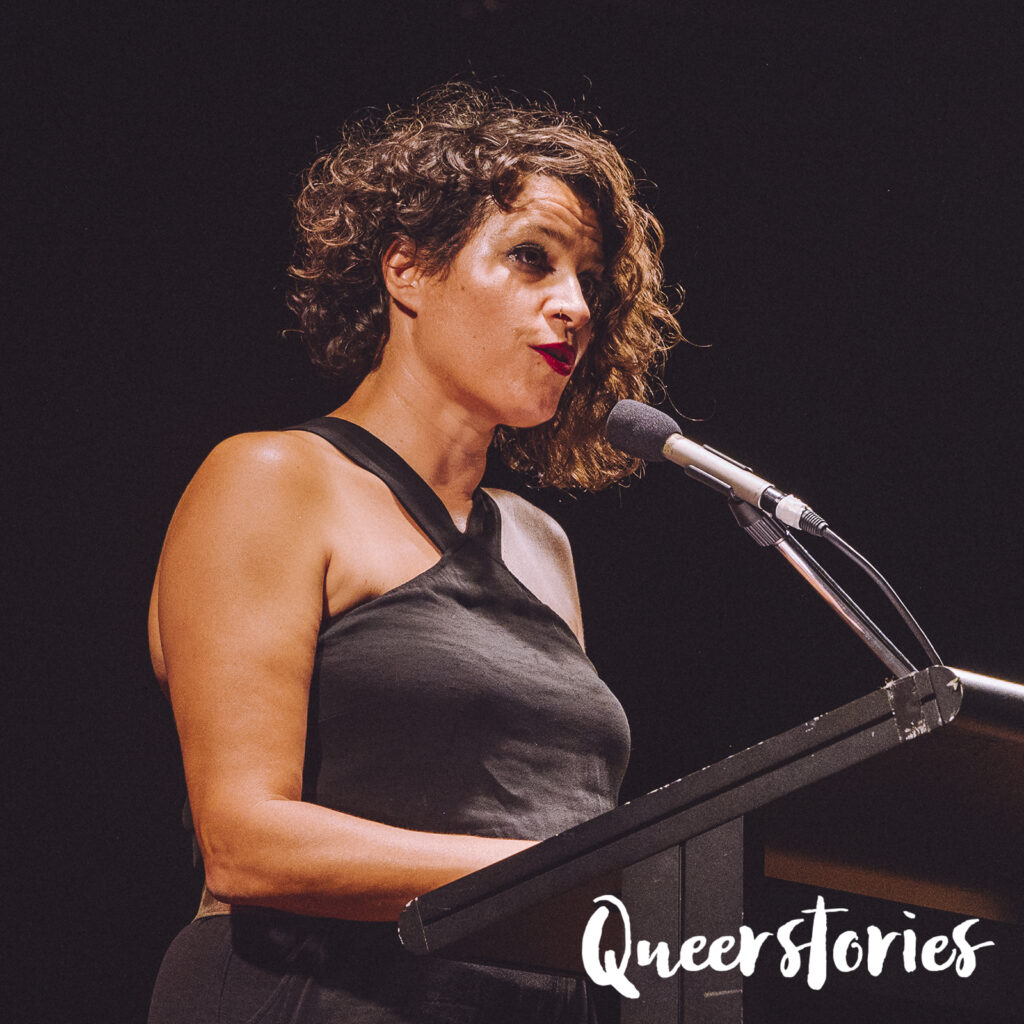 Maeve: Hi, I’m Maeve Marsden and you’re listening to Queerstories. This week Jex Lopez is mostly known amongst queers as a singer songwriting pianist. A vaudevillian cabaret noir artist, her music and style is intrinsically tied to her identity as a queer Latina Meztiça with Portuguese Indian heritage. She released her irreverent debut album ‘Playing Dead’ in 2018. She works part time as a primary school music teacher and spends a lot of time making visual art for her Lino print business JexCuts. Across all of her creative practice, she makes beauty from the shadows and finds theatre and joy where we could easily despair. This is her story.

Jex: Over the course of my adult life I’ve had a very up and down relationship with my mind. Partly genes, partly intergenerational trauma, partly cultural and historical displacement and partly feeling othered for being a wog in a white world and queer in a straight world. But I think a big piece of this puzzle is that I was sexually abused as a young child. Don’t worry this is not really a me too story, I have no interest in sharing any gory details and you won’t be traumatised by my story. You’ll either relate to it or you won’t.

My whole 20s seemed to be clouded in a constant struggle to just be in the world. I had a constant fear of new people, new situations, of what might happen to me, a fear of ridicule for being incompetent or incapable or of being too sensitive to be in the company of other people. I feared walking down the street and I also feared being assaulted or getting into situations that I could not get out of. I feared authorities and I feared men. I feared people in general. I feared getting on the bus. I feared failing. I feared speaking on the phone, and I feared spiders. If you wanted to name something else, I probably feared that too. I feared life. In retrospect, I lived outside of myself looking back at myself with judgment that I was not good enough, that I should be ashamed of myself and that I had done something wrong. I was carrying around a fucking huge weight. Later it would be diagnosed as complex ptsd, but at the time I just thought it was my shitful and unfortunate personality. I thought it was normal to constantly feel like there was something wrong.

In my late 20s when my telephone phobia got so bad that I nearly got fired from my job, I finally got some counseling for anxiety and she suggested that I quit my miserable yet safe research job where I didn’t have to talk to anyone. Exposure therapy led me to take a job training people on a telephone counseling hotline for people with schizophrenia. You know that saying- you teach what you need. Exposure therapy works. Having a job where you are exposed to your fears is effective therapy.

After work, I would do little DIY performance projects and puppeteering. I was a natural creative.  And I wanted more of this. So I took a job in Lismore far away from the anxiety inducing bustle of Sydney. I was now Happy Healthy Harold. Which for those of you who don’t know it, is a job as a puppeteer slash educator and I started touring around the Bundjalung area in a caravan with my hand up a giraffe’s bum. I was teaching kids to love themselves enough to not smoke or take drugs.

This job was epic. Suddenly, after working in an office for most of my frightened life, I was on a sort of never ending tour of country schools around the Far North Coast. Instead of dealing with stop start Sydney traffic, the only ever hindrance on my way to work now were cows crossing the road. In the first year before I got a GPS, I used an analogue street directory to find new schools every day and greet teachers and kids, who were looking forward to a funny and theatrical lesson on drugs and alcohol and other public health dangers. My puppet Harold was hilarious and I made curtains and a spotlight for him and turned the caravan into a mini theatre with music and fake foods and props and never ending jokes that made some children laugh so hard they weed their pants. I barely drank alcohol during those six years- not because Harold told me not to, but because I realized that alcohol was greatly contributing to my anxiety attacks and my general ill health.

For the first couple of years, on the surface I looked confident and at ease. In reality it was a performance role and I’d been performing the role of a well adjusted person all my life so it wasn’t that new. But I was like a duck- serene on top of the water, and paddling like fuck underneath. But, I did the same thing over and over and over and over for six years and I became an expert in an extremely niche, funny, yet exhausting job.

Even though I could now talk to strangers without having a near heart attack, I still felt shit about myself. Like many survivors with a pervasive yet allusive feeling that something is wrong, I tried many new things in the hope that a change would bring about inner peace. So I started studying to be a teacher? During my studies, in a session on child protection, I realized that what I had suffered as a child, was in fact grooming and abuse and I realized that I was not ok, and that I needed help.

So, while studying to become a teacher AND working full time, I started an intensive sexual trauma recovery program with a specialist service. You see like many survivors, when you’re so used to anxiety, loading yourself up with a ridiculous plate of extra stress doesn’t seem like a bad idea.

This 6 month group program in Wollongbar, called Heartfelt House, involved sharing my stories and pain with five other women and 3 counselors. Going to this program every week was the most difficult and terrifying thing I have ever done in my life. Way more than any performance in front of any amount of people. It was also a lifesaver. The beginning of a new mind, a new set of thoughts, a new way to be in the world and the realization that I was not crazy and most importantly, that I was not alone. My late friend, the powerhouse poet Candy Royalle said “when faced alone, trauma makes us feeble. This is a collective experience, where we explore the human condition, both dark and in all its brilliance.”

At Heartfelt House,  we learnt that people who have suffered complex trauma as children display similar symptoms to people who have experienced war. A sort of long lasting shell shock.

(singing) “When the fairytale is over, I’m still gonna be stuck with me.

When the danger has faded, I’ve still got an enemy.

When the battle gets real, I’m still gonna be here.

When the nightmare is over I’m still gonna wake up with me, with me.”

This course lead me to the work of sociologist Brene Brown who points out that the opposite to shame is actually connection. The taboo and silence around childhood sexual trauma help to keep survivors- and there are a lot of us- isolated. Isolated from others and isolated from our true selves.

So there I was, processing my pain with 8 others for six months, while at work I was still the happy healthy giraffe. I was like a children’s rockstar clown. When I would rock up at schools kids would lose their shit- ah its Jess its Harold this is the best day of my life!” while at home I was crying almost non stop for six months.

(singing) “Doctor I feel so lonely, I feel so down.

You see that funny clown- that’s who I,

We need to cry

And when the ceremony’s over

Won’t you come on back to, please don’t leave me lonely, please come back to mine.”

After I finished the program I started processing my pain through music. My purpose for producing and performing music is clear- connection. This year, with the help of Melbourne musician Mojo Juju who’s mentoring me, I will release my song Little Red- which you’ve heard a snippet of, and hopefully, start a conversation with others about recovery from sexual trauma because I know, I am not alone.