Yenn shares a story about contending with their past.

Yenn Purkis is an autistic and non-binary author, advocate, public speaker and community leader. They also have a diagnosis of schizophrenia. They are the author of nine published books on elements of autism and blog regularly. Yenn is a public speaker of almost 20 years’ experience and has presented at a range of events including for TEDx Canberra in 2013. Yenn facilitates an autism support group which has been running since 2011. They have a number of awards for their work including the 2016 ACT Volunteer of the Year and 2019 ACT Chief Minister’s Inclusion Award. 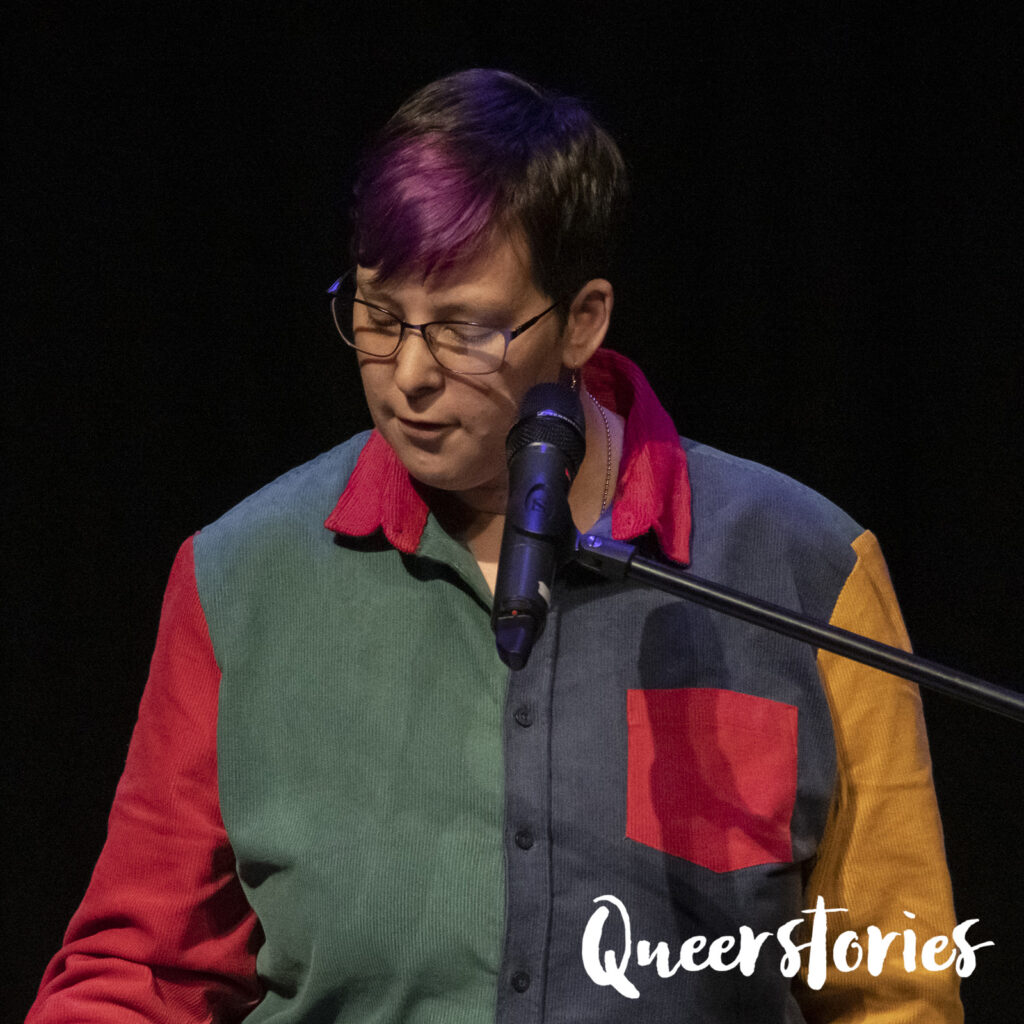 Maeve: Hi I’m Maeve Marsden and you’re listening to Queerstories. This week Yenn Purkiss is an advocate, public speaker and community leader. They’re the author of nine published books on elements of autism and blog regularly. Yenn is a public speaker of almost 20 years’ experience and has presented at a range of events including for TEDx Canberra in 2013. Yenn facilitates an autism support group which has been running since 2011. They have a number of awards for their work including the 2016 ACT Volunteer of the Year and 2019 ACT Chief Minister’s Inclusion Award.

Yenn: It was 6:30am on Saturday 5 February 2000. In the Metropolitan Women’s Correctional Centre a troubled young inmate had been awake all night – a combination of it being a humid night in a sweltering Melbourne’s summer and their anxiety about the future. The prisoner – criminal record ID 102604, was a chronic recidivist with a history of violence and quite extreme self-harm, known to their few friends as Jeanette. They did not know this but they were about to embark on a radical change in direction and start a new life that would take them to amazing places.  That troubled prisoner was me.

I was picked up at the prison gate by my parents. Most of my world’s possessions were with me in a cardboard box. My ex-partner had stolen almost all my things as a reprisal for my deserting her and going to jail. I was literally starting from nothing. My parents had supported me for many years when most others would have simply given up. I imagine they thought that this release was nothing new and I would soon be back within prison walls. However, this time that would not be the case. I had decided that a new millennium should equal a new life and I was going to make that happen. My parents drove me for two hours to a mental heath service called Spectrum. One of the things I had collected on my trips to correctional facilities and psychiatric hospitals over the years was a misdiagnosis of borderline personality disorder. Spectrum was for people with this diagnosis. There were many women at Spectrum, all of whom had experienced trauma, usually at the hands of a male family member or partner.

While I was at Spectrum my attitudes to life changed. I didn’t want to commit crimes because crimes create victims and I didn’t want to victimise anyone having seen the trauma it caused to my housemates at Spectrum. I wanted to be positive and change my life. I wanted to be part of the ‘ordinary’ world – have a corporate job, an education and a mortgage! I wanted to put good things into the world, not negative ones. A new life for a new millennium indeed!

After six months my time at Spectrum came to an end. I moved into a house for young people with mental illness. It was in a crumbling mansion in Albert Park – one of Melbourne’s most pricey suburbs. I had loads of new friends in the house. Friends and social acceptance were important to me. In addition to my mental illness I am autistic. I spent most of my childhood, teen years and early adult life essentially alone. I was bullied at school and never felt accepted by people. At the house things were different. I made friends with lots of my fellow residents and even had a relationship with one of them. I hadn’t given up on my goal to be ‘ordinary’ so enrolled in university. I studied Fine arts because I figured I was good at art. Also most professional graduate roles in the corporate world want a degree but it shouldn’t matter what that degree was – my brother had told me that and he was a public servant so I figured he must know about such things! University was a great big joyful, exciting adventure. I loved being an art student. I would wear my paint-spattered clothes on the tram and write essays about poststructuralist philosophy — it was heaven!

Part of being ‘ordinary’ – probably the main part when I come to think of it – revolved around being employed. One of my housemates had a job at a restaurant and got me a couple of shifts a week washing dishes. It was not difficult work. I filled the sink and washed the dishes, dried the cutlery, filled the sink again and washed more dishes. The whole process went on for the evening and then I had a staff beer and caught the last tram home at midnight. I was good at it but there was a problem: I am a huge perfectionist and I was terrified I would make a mistake and it would somehow mean the restaurant went out of business! My anxiety was off the chart. I should say here that my (correct) mental illness diagnosis is schizophrenia. High levels of anxiety over a long period results in psychosis for me. This instance was no exception. I got extremely unwell. It was at the end of my first year of university and there were exams to sit and assignments to submit. Thankfully staff from the residential program helped get me a special consideration from uni and I passed the year but when I started second year I was still unwell. It was very difficult but I stuck at it. One of the secrets to my success is that I am determined, motivated and resilient. When I realised that work wasn’t for me I never thought that this would be indefinite. I remember thinking “I can’t work now but I will work one day.”

I spent two years not working at all, just going to university. I then wondered if maybe I could do some volunteer work so I contacted an art gallery I liked and offered my services as a volunteer. I turned out to be a great volunteer. I realised that maybe I was ready to do some paid work. I started by running my own business shooting and editing videos. Then out of the blue an autism organisation asked if I wanted to train to do public speaking on autism. I said yes and soon found myself in a room full of autistic people. It was wonderful! It was life-changing too, mainly due to Polly. I was drawn to Polly as soon as I met her. I asked about her life and she told me she was a nine times published author and autistic advocate. Polly was an autism world celebrity and she became my friend and mentor. After a while Polly recommended that I write my life story. She said my book would be for the parents of autistic kids who get in trouble with the law. I didn’t need any further convincing. Clearly she was talking about my parents. It took me four weeks to draft the book and two weeks to edit it and it took the publisher three weeks to agree to publish it. It was easily the biggest accomplishment of my life! The book gave me endless confidence and a whole new view of who I was. And without the book, the next part of this story would almost certainly not have happened.

Three months after the book was published I applied for two graduate jobs in the public service. Taking my brother’s advice from many years ago, I used my Masters degree in fine arts to support my application for generalist graduate roles. When I applied for the jobs I had a conversation with myself. It went something like this: “I have a criminal history. It is likely I will not be allowed to do these jobs. However, if I apply and don’t get them I have lost nothing but if I don’t apply but could have got them I have lost a lot.”

The process for applications was extremely rigorous. I was asked to do a timed comprehension test which I was certain I had failed but then I was asked in for an interview, they called my referees and then offered me the role. I was astounded! I had to provide a bunch of additional information due to my criminal history but also my mental health. The department I was working for conducted an investigation. I supplied – along with other things – a copy of my autobiography. It was an anxious wait  but I was successful. I have now been in the public service for fourteen years. I love it. I have been promoted twice and am well regarded at my agency. I may well be the most unlikely public servant in Australia but I am extremely grateful to have had the opportunity to work. I am very loyal! My journey is remarkable and I am grateful to have the opportunities I have had. Thank you.