277 Rebecca Starford – The Story of the Seven Cats

Rebecca leans in to the trope of lesbians and cats, adopting not one but seven to appease her animal loving wife.

Rebecca Starford is the author Bad Behaviour: A Memoir of Bullying and Boarding School and novel The Imitator. She is the Co-founder and Publishing Director of Kill Your Darlings magazine and a former editor at Text Publishing and Affirm Press. Bad Behaviour is currently in development with Matchbox Pictures for adaptation into a TV series. Rebecca recently completed a PhD at the University of Queensland, where she has taught creative writing. 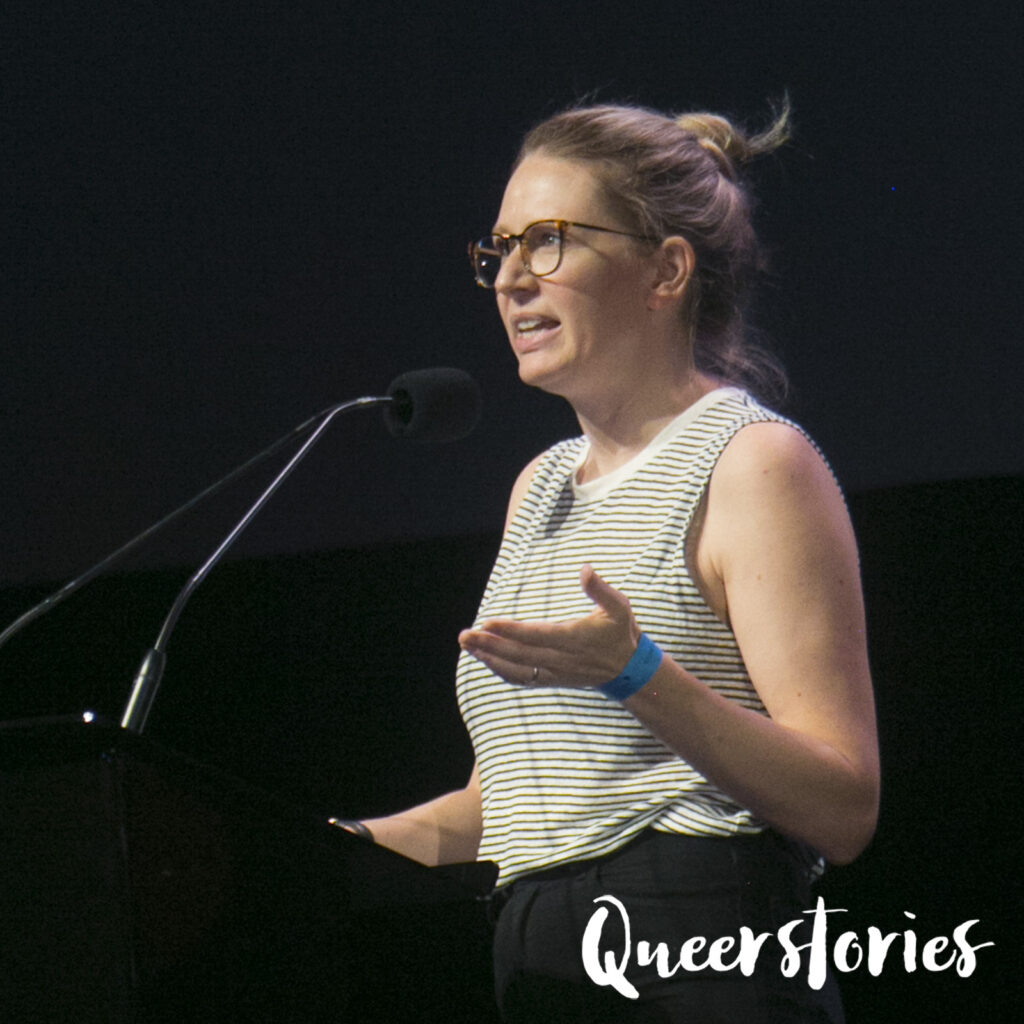 Maeve: Hi, I’m Maeve Marsden, and you’re listening to Queerstories. This week, Rebecca Starford is the author Bad Behaviour: A Memoir of Bullying and Boarding School and novel The Imitator. She is the Co-founder and Publishing Director of Kill Your Darlings magazine and a former editor at Text Publishing and Affirm Press. Bad Behaviour is currently in development with Matchbox Pictures for adaptation into a TV series. Rebecca recently completed a PhD at the University of Queensland, where she has taught creative writing, and she performed this story at Sydney Writers Festival.

Rebecca: There was a moment three years ago when I, six months’ pregnant, watched one of our rescue kittens, Archie, eating strips of chicken from the legs of the donor of my soon-to-be son, and I paused to wonder just how I had managed to get to this particular stage of my life.

Of course we all know the nexus between lesbianism, cats and your sperm donor sitting on your living room floor having one of your cats eat strips of chicken off his legs is fairly well established, right? I mean I’m pretty sure there’s been a scene like it on The L-Word (maybe the Generation Q series). And in case you’re wondering, this chicken/donor scenario wasn’t some creepy game, either – we were trying to get the cats more used to other people and chicken seemed to work best. It’s totally normal Saturday evening behaviour in Brisbane.

My wife and I had just spent a pleasant day with our in-utero son’s donor, and his wife, who are really good friends of ours. We played lawn bowls, then we came home for pizza and an evening of horror films. Above the sound of the TV, we could all hear the mad loping of the rescue kittens, our original cat getting into a fight with a dog, another scrabble of another cat, god knows which one, in the litter tray. There was something completely bonkers but also utterly inevitable about this situation.

‘So, just how many cats do you have right now?’ our donor’s wife asked. I knew she was wondering about the spare room that we’ve put them in and whether we had a lock on the sliding door.

‘Right. Seven cats.’ She turned back to Rosemary’s Baby, frowning. Needless to say, the situation for her was just plain bonkers.

But in my defence, she should have known what she was getting into. We all know the old stereotype about the lesbians bringing the U-haul on their second date … Well, on her second date with her future husband, he’d had to fess up that he’d promised his sperm to the lesbian couple who were living next door, and knowing this would she still like to date him? It was okay because she did, and because they are both lovely and very generous, but what I learned from this is that straight people have their issues too.

I should have known – about the cats, I mean. When my girlfriend, who would later become my wife, moved into my Melbourne sharehouse many years ago, she was sad about not having a cat. And I mean, really really sad – she would watch Dodo videos and cry. I’d never had a cat myself, so I didn’t quite understand the longing. But I did what any good girlfriend would do: I took her on walks to visit the local cats. And lucky for us, there were many cats in the area, and they were all fancy breeds, like Russian blues, the Persians, the Burmese. They were definitely not rescues. My wife is also British, which is an important detail because it means that almost all her emotions are repressed and later sublimated towards cats.

So, really, I was way out of my depth from the start. ‘Before I came to Australia, I rescued two blind kittens from a beach in Portugal,’ she told me on our first date. ‘And before that, when I was at uni, I worked at the local hedgehog rescue shelter.’ I didn’t even know such shelters existed, but she comes from a rural part of Wales where hedgehogs are apparently injured quite frequently by cars. ‘I made my mum clear out the attic and I’d feed the hedgehogs around the clock to keep them alive,’ she told me gravely. ‘I didn’t sleep for weeks.’

Jeez, thought I. During my school holidays, I worked at the local La Porchetta restaurant, earning $8 an hour – in cash – but I liked her, so I kept that information to reveal for later.

There is much I should have gleaned about my future wife’s stories during our first date, but in my youthful vacuity I came away with just this single shiny gem: that baby hedgehogs are called “hoglets”.

Many years later, now married and living in Brisbane, I found myself trying to get pregnant. But pregnancy had been difficult – we’d had many rounds of failed IVF, many thousands of dollars that we could not afford, many days of wondering if it would ever work, many more wondering what we would do if it didn’t.

And this, oddly, is where my story returns to the cats. And yes, in hindsight, I can see that perhaps it wasn’t sensible to have, at one point in time, seven cats in the house. But we would go on to rehome most of them, and keep the rest for ourselves. We’re now a house of 4 cats. A bit unhinged, I know. But we’ve got 3 humans now, so the ratio is less than 2 to 1, right?

And there is a method to our madness – a superstition that’s befitting all my black cats. Because the day I started my medication for the IVF round that would result in the pregnancy that produced my son, we found that batch of kittens down the side of our house. They were so small and angry and sick. And like she had in Wales with those hedgehogs, my wife had spent the days and nights that followed nursing them back to health. There is something selfless about caring for animals; I have learnt a lot from my wife about how animals can transform you. One of the kittens, the runt of the litter, was dangerously ill; he nearly didn’t make it. But he did, and we called him Archie.
Not long after this we got the news I was pregnant. Suddenly everything had changed. I could start to seriously imagine having a child. Maybe it was all going to work out. Maybe I wouldn’t have to call the IVF clinic ever again.

But then at seven weeks I had cramps, and I started bleeding. Great rushes of blood. I thought, That’s it. It’s over. We’re going to have to start all of this again.

We were in Byron Bay, of all places, on the beach with friends. Later there was going to be a party. Everyone else was drunk. After calling Telehealth, then we were told we had to wait another week for an ultrasound to see whether I was still pregnant.

We went home to Brisbane. The bleeding continued, and I stayed in bed. My wife looked after me, and we started talking about how we would try again. Everything seemed very bleak. Archie, the runt of the litter, the rescue cat, came up to the bed for a cuddle. My wife picked him up, gave him some fuss, and then pretended to rub him on my stomach, making circles, sounding a chant. It was all very silly. ‘Maybe he’s our lucky charm,’ she said, and we managed to have a laugh.

And then, the next week, we went back to the clinic, and we did hear our son’s heartbeat on the ultrasound. Despite having mad cat women for mothers, he decided to stick around.

Now I’m a deeply rational person, but in that moment I did find a deeper meaning in the arrival of all those kittens. And although are there days where I am literally herding cats, when I catch sight of my son crouched down beside them, giving them each a pat, I know I couldn’t do without any of them.