270 Brendan Hancock – At The Table

A queer reboot of the Arthurian table of legend, but this time with lesbians, drag queens and a ghost.

Brendan Hancock is a Sydney based comedian who is well-known on the scene. You’ve heard him on FBi radio, seen him host the rave-reviewed Two Queers Walk Into a Bar at Giant Dwarf Theatre, and as the resident MC of Darlo Underground at Darlinghurst Theatre. Not one to let 2020 get him down, he also co-produced the Two Queers Festival, Australia’s first queer comedy festival! Already a crowd fave and “everything we didn’t know we needed” (Time Out Sydney), Brendan recently spent all of January with his dog Sam and had a nice time. 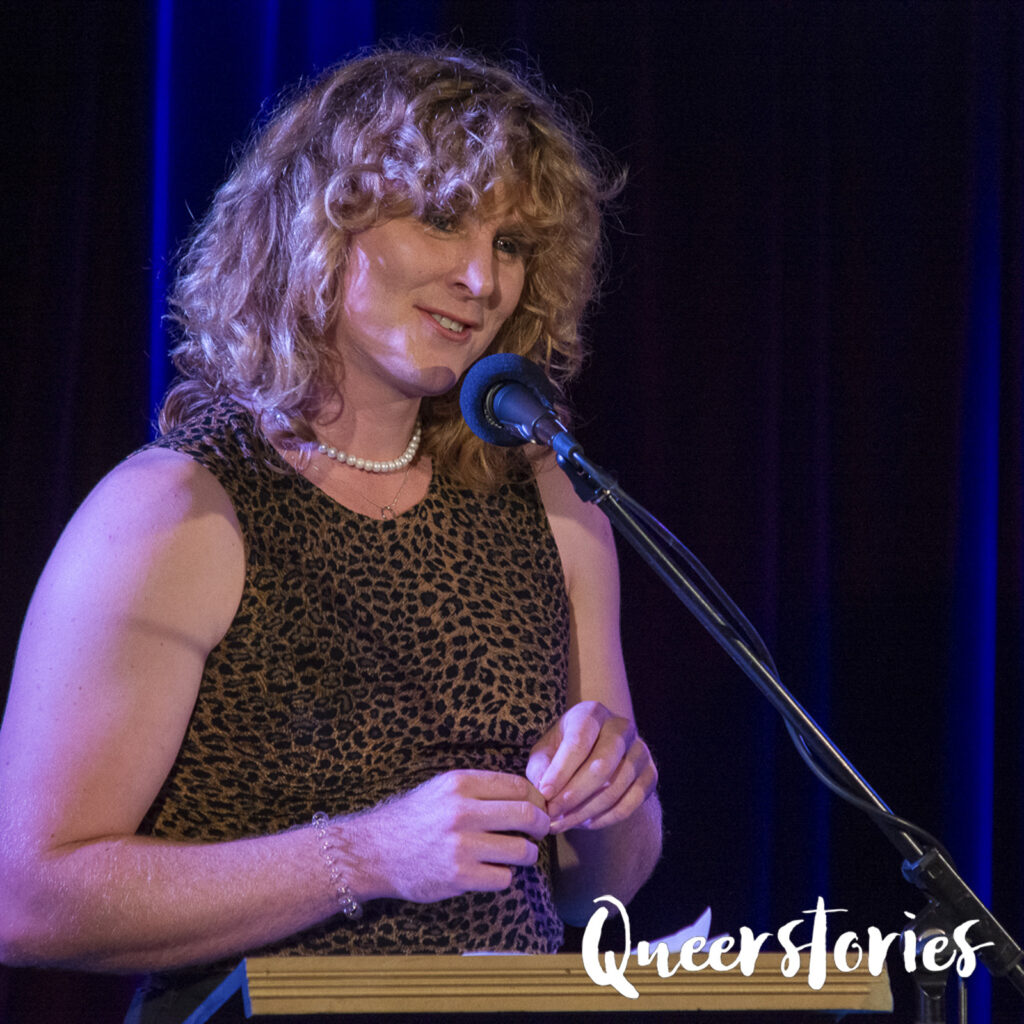 Maeve: Hi, I’m Maeve Marsden, and you’re listening to Queerstories. This week, Brendan Hancock is a comedian and cohost of the rave-reviewed Two Queers Walk Into a Bar. You may have heard him on FBI radio or seen him as the resident MC of Darlo Underground at Darlinghurst Theatre. Not one to let 2020 get me down, he  co-produced the Two Queers Festival, Australia’s first queer comedy festival. He performed this story at Giant Dwarf in Sydney.

Brendan: I’ve amassed a small army of queer women in my inner circle. It’s my queer reboot of the Arthurian table of legend, except no men, they’re DOGS…Kristen Stewart has an open invitation, and the table in this instance was a refurb from Reverse Garbage, so.

I don’t want you to think I’m pandering to an audience, but no I will, I will. I am self-aware. The real reason I think Ihave so many queer female and non-binary friends is that I’ve tricked them into thinking I’m one of them, and it’s not my fault I look like all of their mums from the ’80s.

Just like the Arthurian table of legend, we’ve all got different stories of how we came to be at this table.

My friend Madeleine and I, having known each other since high school, reconnected while living in the UK. Realised that we were both queer and therefore better decided to catch up for drinks in London and saw a Buffy the Vampire Slayer tribute band, which, honestly a lot better than you’d think. We also attended a queer leather party in Berlin later that year, but you will have to buy me a drink after the show to get that story. Awwwww. That was my pick-up line at the sex party as well.

Another friend, Jenna, my business and comedy partner, I met when we were both baby comedians at an open mic night – awful, awful places – a man on the line-up that night actually suggested using cocaine as a date rape drug. Now just between us girls – men: I don’t think they are funny or should be in comedy.

And one of the newest knights to the sapphic table, Emily. My lesbian doppleganger. Look when you meet your lesbian doppleganger in an Uber pool. Not only did we live in the same suburb, we lived in the same street across the road from each other, in the vibrant metropolis of Newtown. Gorgeous! Look we might not have beautiful beaches or frolicking hills, but we’ve got goths and that one house at the bottom of my street, the one with the caved-in balcony, every time I walk past it, I can hear the soft and gentle sounds of two pigeons going at it [bumping fists together] It’s quite beautiful, lots of coo-ing. Sounds very consensual.

Now, what good is a fable, or overextended metaphor at this point, without a journey, or a quest to fulfil.

After a few weeks of friendship with Emily, our newest knight, she invited me to a party in Tasmania. This made a lot of sense because Emily’s girlfriend lived in Tasmania and organised a queer party in Hobart called Limbo. It’s a good time, you should go, borders are open people. Emily and her girlfriend started dating when she flew down to Tasmania for a second date. As the gay Tik-Tok children say, go off girls!

Having been inspired by this tale of interstate love, I dreamt that I might meet my own Tasmanian Devil, a cruel, cruel joke at my own expense, they’re extinct. And look, there is a demon, sorry a boy, in this story that I used to know. Don’t worry he’s not dead, I wish. It’s just a waiting game at this point. Fingers crossed.

I found myself a few weeks later touching down in Hobart on a brisk Saturday morning. My chariot arrived in the form of a 1991 Daihatsu Charade. Our host for the weekend has brought together an eclectic group of queers, a wannabe comedian (yuck), a netball coach, a management consultant and an Australian water polo player. Surely the set-up to a joke. The punchline? We’ll get there shortly.

When you’re travelling to a big party with a bunch of queers there’s something in the air. There’s discomfort, there’s electricity, there’s outfits, and there’s endless possibility because no-one grows old in a night. And we just fucking like to dance, I don’t know.

A queer party to me is a beacon. A sanctity which moves us forwards toward collective freedom in a glaze of glitter and sparkle. But what is it about our people though? Normally the arbiters of taste, but throw some glitter at us and it’s moths to a flame, it’s just that if you’re finding moths up your asshole three weeks after a party, please see a doctor.

The night progresses as they are usually want to do. A few local magnanimous drag queens, the staple of any local scene, evoke and stoke the fires of queer parties past, a lip sync to Madonna, a hit of poppers on the discotheque floor, an offering, the party begins, and ends. Oooh, spooky.

A screeching alarm wakes me the next morning at 8 am. It’s here in our hero’s journey, that I wake up in a bed that is not my own. I get up, and leave a note of thanks because I was raised right. Also, and if I may speak candidly Queerstories, I do want a fuck network across the entire country. Dream big. I’m hoping it’s just like the movie Ingrid Goes West, but instead Brendan Goes Down Under. A quick scurry to my Airbnb to pack, and then a race to the airport before falling asleep on a 10 am flight.

Arriving back in Sydney, I turn on my phone to a message which says:

Liam. Hazy memories of kissing on the dancefloor, shots at the bar, a taxi ride home. The unnamed stranger whose bed I ran from without so much as a goodbye.
We start texting. Every day. A dumb amount, a stupid amount.
He tells me of his love for Claude Debussy. The famed 18th century composer, if we have any Debussy fans in tonight? No? Yes, we’ve got a fan? Name three of his bangers. But like what kind of 26 year old’s favourite musician is Claude Debussy, the man who’s last name is now a colloquial term for a man’s asshole? Claude De-asshole doesn’t really have the same ring to it.
I tell him I want to quit my job because I’m miserable. He says do it, and come live with me in Tasmania. (Sighs) Correct reaction from the front row.
We start calling on the phone. My friend Maddy overhears one of our conversations, and look she was right to do this because she made fun of me afterwards because I did genuinely say, “I’m just really interested in learning more about yoga…like what is chatarunga?” Awful.
I rush home from work on bad days, so we could chat and gossip like school kids.
I learned the ukulele, and that’s the only part of this story that I thought about taking out because, while at the time I thought the ukulele was the only instrument capable of confessing my love, a grown man learning la vie en rose on the ukulele, this is not a 1990’s Katherine Heigel rom-com, it’s not cute, it’s a cry for help.
On one phone call, we agreed that I should go down to Tasmania for a second date and I’ll stay at his for the weekend.
I’m being cute, cool and casual. All adjectives which don’t work, when you’re flying to Tasmania for a second date.
But I’ve got a precedent. It worked for Emily and her entrepreneur Tasmanian lawyer party planner, like there’s got to be more than one.
The day arrives, and I’m sitting on a different plane. And this time, I send the first message.
A quick selfie and a see you soon!
I get a very, very quick reply:
“Hey, I’m going to be out of Hobart this weekend. I forgot I have a wedding, you can’t stay at mine.” And then the plane begins to taxi, and I go on airplane mode, because I was raised right.
And then just an hour and a half on that flight up in here. If I was to continue the metaphor of King Arthur, this is the moment where the dickhead can’t get the sword from the stone.
Nothing. Zip. Nada. Not even an apology. Ghosted over the Tasman.
[Whispers] I learned the ukulele, I can’t take that memory back. I’m sad now for telling that but I was genuinely sad at the time. I did sleep on my friend Emily’s couch that weekend.
She and her girlfriend, part of my trusty circle, there to pick up the pieces. I hate that metaphor. Puzzles are stupid.
I never spoke to Liam again, and I won’t. I’m aware of the irony of this story in front of all of you. Don’t mention it. Grow up. See me after the show.
And I won’t give him the satisfaction, because I get my revenge by not thinking about him. And that’s easy to do every time Jenna and I sell-out our super successful comedy night, when Maddy and I spend a day at Clovelly Beach talking about everything and nothing in an important summer ritual, or when Emily sends me a text saying, fuck, I’ve been on tiktok for 4 hours today and then proceeds to send me every video she watched.

I’ll be fine. This isn’t a trauma thing, sorry Nanette.
Two lessons learned.
1) The next time Emily invites me to a party in Hobart, she can fuck off. And;
2) I’ll always, always , take solace in the fact that I’ve got my table of queer warriors behind me and all he has now, is a boyfriend who watches all of my Instagram stories.

Thank you, I’ve been Brendan.