Imogen reflects on bodies, history, gender and connection, remembering her mother, an ex-partner and her childhood.

Imogen Kelly is a performance artist, writer, director and producer. Hailing from the queer underground, Imogen is renowned as Australia’s Queen of Burlesque and was officially crowned World Queen of Burlesque in 2012 (Burlesque Hall of Fame, Las Vegas). A La Clique/ La Soiree veteran and creator of award winning burlesque theatre shows, Imogen has performed in The Sydney Opera House, Sydney Festival, Adelaide Cabaret Festival, Vivid Festival, The New York Burlesque Festival, The Noumea Burlesque Festival, Helsinki Burlesque Festival, Prague, New Orleans, Dallas, Austin, Toronto, Hamburg, Berlin and beyond. During COVID Imogen has been making short films of her performance pieces and is preparing for an exhibition in late 2021. This year she is launching three shows in Sydney including The La La Parlour, a quarterly variety night, Herstory- The Walls Are Talking- a trip through the history of Australia’s Red Light district as told by the women who worked there, and a gargantuan celebration of her life’s work in a retrospective later in the year. 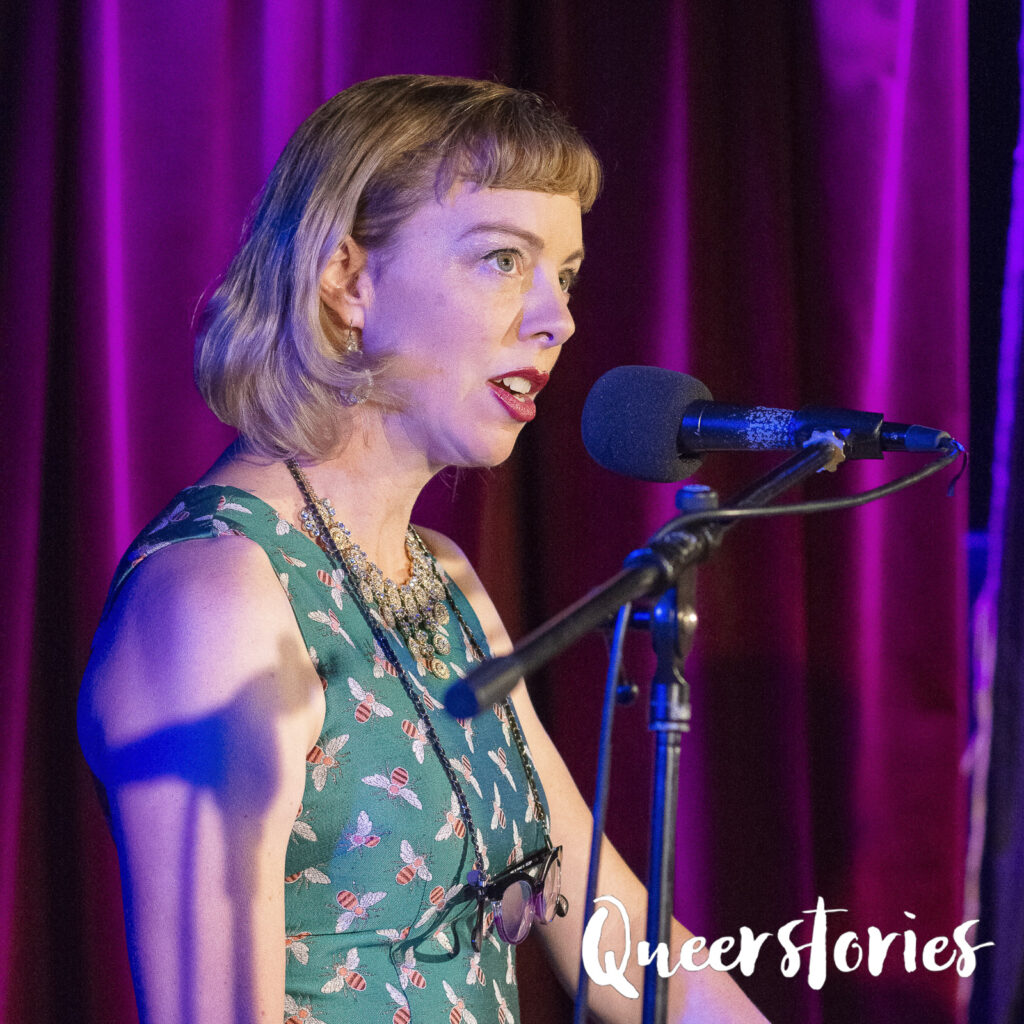 Maeve: Hi, I’m Maeve Marsden, and you’re listening to Queerstories. This week, Imogen Kelly is a performance artist, writer, director and producer. She’s renowned as Australia’s Queen of Burlesque and was officially crowned World Queen of Burlesque in 2012. Imogen has performed in venues and at festivals across the world, she’s a community icon frankly, and I was thrilled to have her perform at Giant Dwarf in Sydney.

Imogen: I’m thinking of you.

It’s no surprise. I’m here again… talking to surgeons… weighing up my options.

My options become more limited each time I jump on the surgical merry-go-round.

This time however, it will be different. So I’m thinking of you. My first boyfriend.

I have this strength because of you- and the God Squad- the Girls of Disgrace. I guess I fell in with “the wrong crowd.” But I’m glad we were wrong. It has taken a long time for it to become right.

Was that when the seeds were planted? I don’t know.

Another time, whilst stomping around the house I declared to my mother that I could no longer possibly be a girl.

Boys had everything so much better than girls and it didn’t make sense. We make them… how could we be less than them?

She agreed on that point.

She also agreed that I could be a boy.

She had been dux of the school.
She was very beautiful.
She was very witty.
She came from a well to do family.
She had three stunning children.
She had a successful husband.
She lived in a big beautiful house.
She had everything!!!

And yet there she was, stuck in a kitchen in a stained cotton nightie, making a meal of SPC spaghetti on white toast to try and stave off her depression. This depression others saw as abnormal and indulgent.

She should be happy.

She and I agreed that her state of being was a natural response to drudgery.

She drew strength from my boyhood – and as she watched me challenge both my brother and father in all of their indoctrinated ideas about what girls could and could not be.

She eventually had the strength to get herself a university degree. She got a job… as a secretary… to the Attorney General no less.

She was done with bullshit.

She left my father. And I went with her.

She didn’t correct people when they called me sonny or boy or lad. And when confused people asked if I was a boy or a girl, she would let me answer.

My older brother joined in on the antics renaming me King. That suited me fine.

I could do everything my brother could do- including peeing standing up. How could I be less? Hm?

When she had to remove her breast to survive cancer, I really started to second guess the entire concept of gender.

She didn’t give a shit- often sporting her mastectomy scar when bathing topless at the beach. It matched her caesarean scar- a deep red welt that ran from her navel to the top of her bikini that told another part of her story.

When all of her hair fell out I still remember my best friend whispering to me in terror that my mother had turned into a man. It spread around the school. I was teased and ostracised.

I was forced to wear dresses. My name was changed back to Imogen. I was told to behave like a young lady. I hid King deep inside me. And I hated everything.

Some short years later I realised I was growing breasts, and I cried for days. I strapped them down – but it was no use. My body had decided my gender for me.

I was dating Talisa – true. But she would call me her surrogate girlfriend – the girlfriend for when she wasn’t having a girlfriend. Hmm.

You had changed too. Dramatically.

I’d heard the rumours… but to see you. To stand next to you. I couldn’t breathe. I watched you so intensely – the way you licked your lips… in full uniform…

I thought estrogen was a hard drug to handle… testosterone seemed even harder.

Your face had changed. Your body. Your style. Your voice. Your walk. Your manner. Your name… so much so that, shy as I was, I had to talk to you.

Slowly we got more opportunities to talk. All those times we were alone together whilst Talisa and her new girlfriend fucked loudly in the bedroom next door… and we were left on the couch watching 90210. I was a Brandon, you were a Dylan.

You had gone from being an infamous dykon to being a channel for the Ashtar Command.

I believed in you. It was an excuse to be close to you in that heavy cloud of frankincense. To sit in full lotus and listen to your voice as you channelled the Lord Sanander who would tell us to put amethyst crystals in our water, grow kombucha mushrooms in a bucket under the sink, beware the impending tidal wave that was going to wipe out the East Coast of Australia and to look to the cloud formations which were cloaking devices for the spaceships that would come and take us away.

The leather had been replaced by blue jeans and a baggy t-shirt. Your shaved head replaced by short back and sides, your scruffy facial hair styled into a fine moustache… it would never be thick. I didn’t care. You still licked your lips the same way.

I wondered how I could win you over and contrived a plan to turn up naked on your doorstep with some croissants one morning.

I didn’t mind helping you funnel birdseed into a condom and helping you pack the front of your leathers before going out to the gay bars and picking up men. This was your validation.

I didn’t mind that you never let me see you naked. That the eighties elastic cumber band you wore around your chest was just another layer that would be between us at all times.

I liked that I, as a pretty blonde, was also part of your validation. You wanted to look like a normal hetero couple, and I was your normal hetero girlfriend. It was so kinky. We went shopping for food in the suburbs… in our norm core drag. No one had ever done that with me before. It was true love.

I didn’t like that I was ostracised from the dykes. They couldn’t handle that one of their own, a fighter for women’s rights and women’s visibility, was jumping ship – and taking me with them. We were traitors.

I didn’t like being the first couple to go through all of this – with no-one ahead of us – no reassurance that it was going to all go well, that your body would handle the hormones and cope with all the stress you were putting it under.

I didn’t like the doctors. You were on the pension, living in housing commission, saving every penny in a jar to pay for an operation from doctors who had no understanding or empathy at all.

The jar was finally full.

Then the jar was finally emptied.

I came over. You showed me your chest, and they were gone. No more need for that eighties elastic cumber band. Finally, I thought our skin could touch. I looked at your scars… thinking I’d be ok… and all I saw was my mother’s body.

The surgery was brutal. Close to the bone.

You became the national head of The Ashtah Command.

I became the Queen of Kings Cross strip clubs.

We were doomed to failure.

Now I prepare for my own bilateral mastectomy… my second one. They will cut close to the bone – again. I don’t think we can reconstruct again.

I am married, live in the bush and raise a child.

I hear you live alone. You drink beer on the couch and watch the football, in your underpants.

The thought makes me smile.

We finally are the perfect hetero couple – living miles and decades apart.