After a stark realisation that childhood dreams aren’t always the best realities, Trent decides to move to Meanjin.

Trent Wallace lives on Gadigal country and is a First Nations Advisor and Pro Bono Lawyer in a global law firm – the first and only Aboriginal person to hold this position. Prior to this, Trent was the first Aboriginal lawyer on the Disability Royal Commission and was with Australian Government Solicitor. In between these positions, he developed postgraduate course content that equips budding lawyers with the culturally safe and correct techniques required to work effectively with mob – another first. A serious Haigh’s aficionado and pop culture quoter, he sums himself up as being a mostly sane left handed, chubby, queer, Aboriginal male who is addicted to firsts and beating the odds to pave the way for young mob coming through. 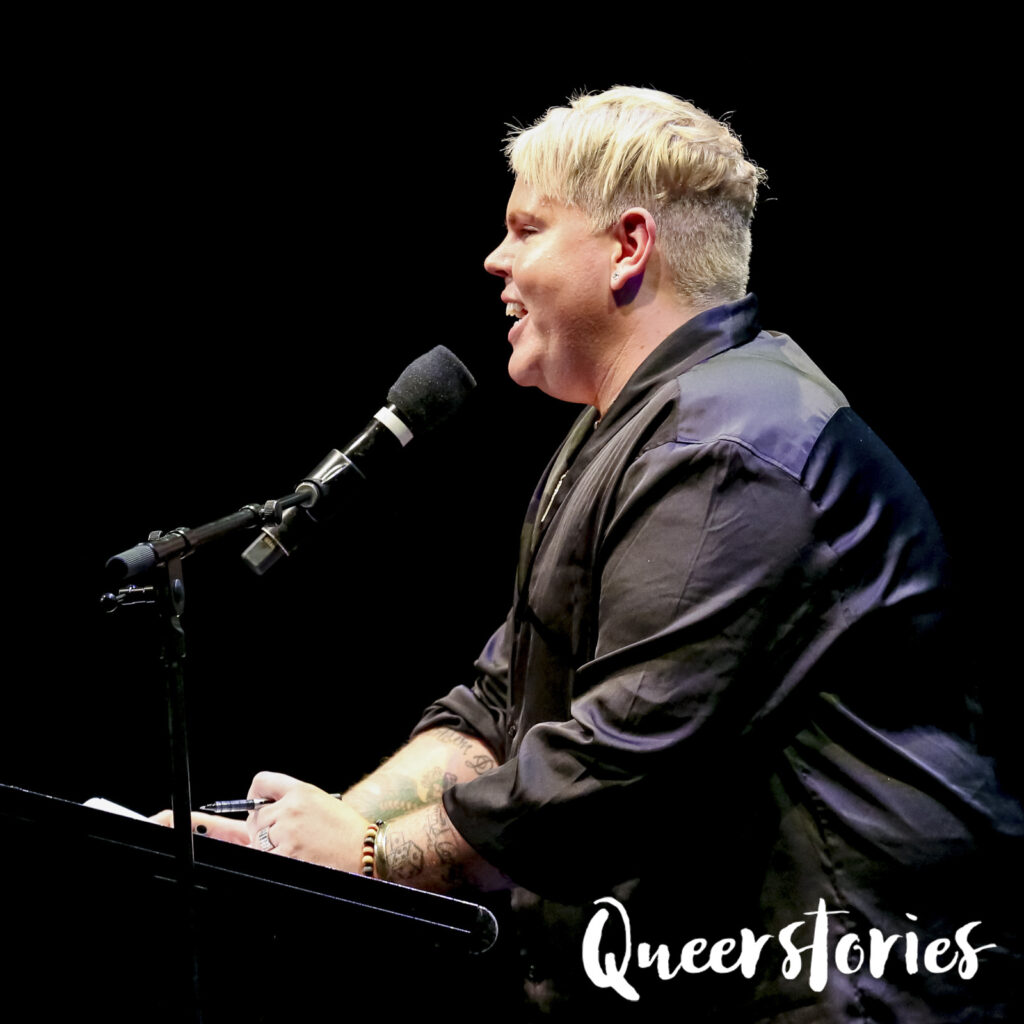 Maeve: Hi, I’m Maeve Marsden, and you’re listening to Queerstories. This week, Trent Wallace is a First Nations Advisor and Pro Bono Lawyer in a global law firm – the first and only Aboriginal person to hold this position. Prior to this, Trent was the first Aboriginal lawyer on the Disability Royal Commission and was with the Australian Government Solicitors. In between these positions, he developed postgraduate course content that equips budding lawyers with the culturally safe and correct techniques required to work effectively with mob – another first. A serious Haigh’s aficionado and pop culture quoter, he sums himself up as being a mostly sane left handed, chubby, queer, Aboriginal male who is addicted to firsts and beating the odds to pave the way for young mob coming through. You can listen to another of Trent’s stories as part of Queerstories 2020, a series written and recorded during lockdown. He features in the episode titled ‘Risk’, alongside a story I wrote about being airlifted off a cliff by helicopter. This story however was recorded at Brisbane Powerhouse in 2021.

Trent: I’m Britney Queers…a Queerdo…the Queerest of the Queer…and I’ve just relocated to Meanjin after falling in love with its vibrancy some 12 years ago. A bustling metropolis it is not. Its occupants thinking 20-30 minutes train ride of bus ride out of the city is basically prime setting for a John Wayne film. Where I used to live, in Sydney, 20-30 minutes out of the city is prime real estate! I’ve found myself comparing the two places a lot lately as I’m adjusting to the slower pace where work / life balance seems to have been perfected and people are either really, really friendly or they look at me as if I’m a cross between Hello Kitty and Ozzy Osbourne. But this relocation was not a planned one.

I came to Brisbane for some time out over the holiday period, and I apologise, I get a case of the Madonnas where you turn that slight British accent when you’re reading. So know there’s some colonial blood here but that’s not my fault, not my fault, not blaming anyone though. Just get over it. Can’t get over what keeps happening.

Brisbane and the people who I stay with – my dear friend of 18 years who I call Weis Bar, and you will learn that I have really bizarre nicknames for my friends but they all mean something very personal to me, and his housemate who has become a person close to my heart, the incredible PON101, they act as a reset from my regular life, and they’re a much-welcomed escape.

I arrived here on December 20, in fact, I was the second last flight out of Sydney prior to Aunty Anna closing the border…again. My dear friends in Queensland were calling me as I was at Sydney airport…the situation seemed to be changing by the minute. A few days earlier I went to the movies with one of my dearest friends, who I call Monte Carlo. We saw Home Alone, which I giggled the whole way through. I recall the scene where Kevin’s mum, played by the indelible Catherine O’Hara is at the airport, trying desperately to get home to her son.

“This is Christmas! The season of perpetual HOPE!” I kept playing those words in my head. I rely heavily on the concept of hope.

As I got off the plane, I saw the tables along the long walkway, usually occupied by small wine testing shops, do you know what I’m talking about here? Do we remember airports? They were now occupied by police and health officers. I presented my border pass and my license, praying nothing had changed and I wouldn’t be whisked away. Generational trauma there. The officer told me I was good to go. That’s a first for an Aboriginal person. And I hurried down the walkway (as if I’m going to hurry, look at this). I made my way to the luggage carrousel. I never truly relax until I see my suitcase, but in this case, I wouldn’t relax unless I made it out of that airport.

My phone was buzzing and the humidity was hitting me as I walked past the exit doors. Anyone who has gone away with me knows I don’t pack lightly. The bag was heavy but I dragged it behind me with ease, as I made my way out of the airport and the sun kissed my skin…I felt a smile across my double layered mask face. I was free.

I arrived to a warm reception… no, quite literally, Brisbane is fucking hot. A few days into my trip I booked in to get a Keratin hair straightening treatment because mere minutes after straightening my hair, it would frizz up like fucking Kath Day-Knight or Scary Spice was in the building. It was nice to give my dear friends a dear warm, long hug, I hadn’t seen them in almost a year. It was also nice to be staying with them. A household of three Tauruses consists of too much food, indecision and stubbornness! “Bling, Bling that’s the Taurus in me” became our slogan. I love assigning blame to my star sign. Accountability is so fucking boring!

One morning, I looked over at my luggage. I whispered to myself that I could not go back to Sydney. The thought of going back made me feel sick. As any good son does, any good queer son, I decided to call my mum for wise counsel. Now picture my mum as like a Sharon Osborne slash Irene from Home and away – boom you’ve got her. Mum was supportive and was onto making arrangements almost immediately after our call. Mum is my idol and best friend and when I heard the support in her voice, I knew I had to forge forward. How was I going to break the news to my Monte Carlo? As I told her over the phone, she greeted me with so much love and support, but she knew in my voice and I knew in hers that there would be tears after we hung up. Monte Carlo and I will always be the best of friends, I can’t put into words my love for her.

I was glad I did not have to face farewells back in Sydney with my other friends. After the death of my grandmother at a tender age, I am terrible at goodbyes. I always want to leave before I am left. This was a death of sorts, I could not return to the chaos of Sydney. The chaos I once craved and had craved since I was a little boy was crushing my soul, as the great philosophers of the noughties, The Pussycat Dolls sang “be careful what you wish for, cuz you just might get it” and then the leg up. It rang true. The lockdown forced me to face some uncomfortable truths. If you don’t pay attention to what the universe is showing you or telling you, the message will grow louder and louder until you’re forced to stop and listen. As a small-town kid, I romanticized Sydney and I felt so fortunate that I got to live out my fantasy of being a lawyer with a BMW and fancy bags and fancy suburb – that small-town kid would be so proud of me, but you can’t exist on former ideals and dreams. Despite my amazing friends, I was deeply unhappy in Sydney.

However, I am so grateful for my time there, both personally and professionally. The experiences taught me so much about myself and helped shaped me into the person I am today – which there’s a lot to shape. I’m doing what’s best for me and ultimately being happy is what will serve others best. You cannot pour from an empty cup. It would be remiss of me to ignore the treasures I discovered in Sydney – friends. True friends will facilitate your dreams.

I don’t know what’s next for me. There is such a power with silencing the chaos of over analysis. If I could sum up my feelings right now it would be “free.” I feel so damn free. Sometimes you just have to blow up your equilibrium and try something fresh. Sometimes you just need to put yourself first – think for and about YOU. I’ve always loved that Tina Turner lyric, “I’ve been thinking about my own protection and it scares me to feel this way” and I can relate to it, except I’m not scared to think about my own protection anymore.