Mads joins the Model UN, changing her life’s course and shifting her relationship to expressing her emotions.

Madhuraa Prakash, also known as Mads, is an activist, formerly working with PLAN International Australia, and a drag king who performs under the name ‘Manish Interest’. Born in Sri Lanka and raised in Australia, she has spoken of her experiences as a queer brown woman on panels for organisations like Women’s Agenda and is keen to have another chance to share her voice with her community. 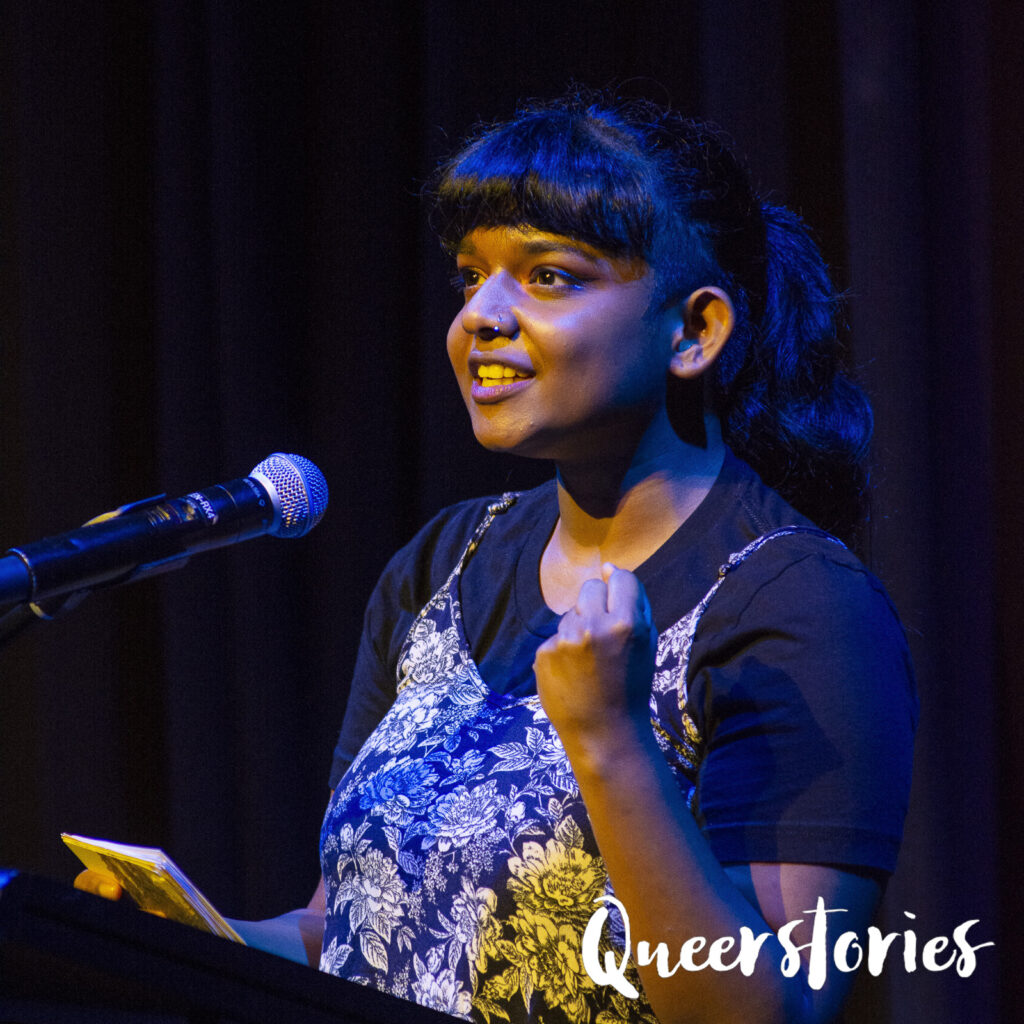 Maeve: Hi, I’m Maeve Marsden, and you’re listening to Queerstories. This week, Madhuraa Prakash, also known as Mads, is an activist, formerly working with PLAN International Australia, and a drag king who performs under the name ‘Manish Interest’. Born in Sri Lanka and raised in Australia, she has spoken of her experiences as a queer brown woman on panels for organisations like Women’s Agenda and she was thrilled to share her story at Queerstories, Western Sydney.

Madhuraa: The moment I graduated from high school, I was determined to reinvent myself. After having a terrible time, and trying to make myself a small as possible, I wanted to become the hot, successful, confident, straight woman that I had always wanted to be. And I’d like to think that I’m in the process of achieving some of those goals. (One is a little harder than the others) And being the nerd that I am, I have to thank my experience with Model United Nations for this.

Model UN, henceforth referred to as ‘MUN’, changed my life’s course. It was through my experience in MUN that I changed from an awkward, self-hating girl – into ‘that loud bitch that keeps shouting about human rights’.

I’ll admit, crying is kind of my thing. I once cried while watching Alvin and the Chipmunks 2: The Squeakquel. It wasn’t one of my proudest moments – but Simon was getting bullied and Alvin was being a toxic cis-het guy and abandoned his brothers in their time of need and it…got me. A lot of movies ‘got me’. A lot of books and TV shows too. And life in general.

So, then this conflict was created. On one hand I was making a name for myself in the Australian MUN circuit, participating in and soon organising the biggest conferences in the country. I was seen as intimidating – which is a pretty impressive feat for someone who stands at 153cm tall.

But at the same time, I also had a crying episode at every single conference that I attended. Whether it was the delegate for the UK pushing a little too hard against refugee rights or a guy on an organising committee with me deciding he knew better about women’s safety, things would get me…But I’d move past them.

Despite all of this, I worked my ass off and eventually became the President of my Uni’s UN society! I was thrilled, everything seemed to be going right.

But then, in January of my year as president, I had…my First Break Up. It was dramatic, because it was me, and because it was also my First Lesbian Break Up. She dumped me by text message, minutes after we had been on a date. I was in pieces.

This ended up being the last straw and the impetus for a massive depressive episode slash breakdown that was admittedly a long time coming. My deteriorating mental health was pretty badly hidden and the difficulties that came with being queer, Tamil and a woman in modern Australia had been building to their almost inevitable crescendo. Suffice to say my ex made the right call.

Soon I spiralled. Badly. I had trouble getting up and existing in the world. I was crying all the time – in bed, in class, in front of my dog.
I actually have a little achievement to share with you all: I’ve cried on pretty much all transport – bus, train, plane, ferry, Uber, taxi – I’m the queen of turning my entire head to stare earnestly out of a window in the hopes that people around me don’t get uncomfortable.

After bursting into tears and running out of the exam room of a Public International Law exam, I decided to take a break from uni.

‘If she’s not studying, can she even be President?’ Said one of the tall white boys on my team just as I walked into the conference room for a UN Society meeting. As a brown, five-foot-tall woman I was not unfamiliar with my authority being questioned and I brushed it off. Honestly, from the beginning of my Presidency I was dealing with people undermining me and it only got more intense the more I struggled.

But I had to stick it out right? ‘You’re a badass Mads,’ everyone told me. I’d fought so hard and come so far and made everyone so impressed and proud, I couldn’t possibly give up the presidency now! But I knew that my team was rapidly losing faith and that I was not being a good president.

That’s right. This isn’t a story of a young woman, looking with a sparkle in her eye at a poster of a scenic landscape with the caption ‘winners never quit, and quitters never win’ and then effortlessly overcoming her obstacles and seeing things through. It’s a story of giving up.

I guess those conservatives were right. An overly sensitive gay woman can’t lead people. I mean, if she was a real UN Secretary General, she’d set off bombs in the US just because Kristen Stewart got married. She’s not built for it, that’s not how the world works……

NO! That’s not right. Where do you think you are, Sky news? No! I was just having mental health problems, and I didn’t have a handle on it.

Soon I healed. I got on new meds and went to therapy and took my dog out for walks and got so much better. I will also note that I was very lucky and had family who I could live with and who supported me and who I am eternally grateful for. Eventually, I re-joined uni for the second semester, and though it was rocky at times by the end of that year I felt whole again.

I now spend my time as an activist, working to try and make the world a better place and trying to create spaces so that queer brown girls like me don’t have to have a year of breakdowns to come to terms with their identity.

I have also spent time connecting with my queer identity and the queer community in a way that I never had before – I do this by making Tiktoks, and by performing as a drag king. I have discovered that we are a community that celebrates emotions and crying episodes and being fricking dramatic.

And here’s the thing: I still cry! Life is hard and while I am much more mentally healthy, I’m still me. And ‘me’ is a crier. But it doesn’t hinder me in any way. It doesn’t make me bad at what I do.

At the end of the day, I refuse to believe that you have to be stoic and impenetrable to be respected and successful. I know there is SO MUCH strength in being sensitive. I am an overly emotional person and I love that about myself. Our society would be better off if we ceased to see crying as this big weakness. My vulnerabilities make me a better, more empathetic person. My year of tears brought me my year of making positive impacts in people’s lives. So maybe I’m a cry baby, but I’m also a freaking badass.