David ponders maps, memory and a sense of place, while sharing a story of his time in the Sydney University Catholic Society,

David Moutou has worked in local government in Western Sydney for the last ten years. Prior to this, he worked for Twenty10, and was a Director and Chairperson of The Aurora Group, a LGBTIQ philanthropic foundation. In the years before YouTube and Smart Phones, David performed as Sandy Toggs at The Imperial Hotel. David is addicted to 1980s style aerobics and has a side hustle as a Civil Marriage Celebrant. 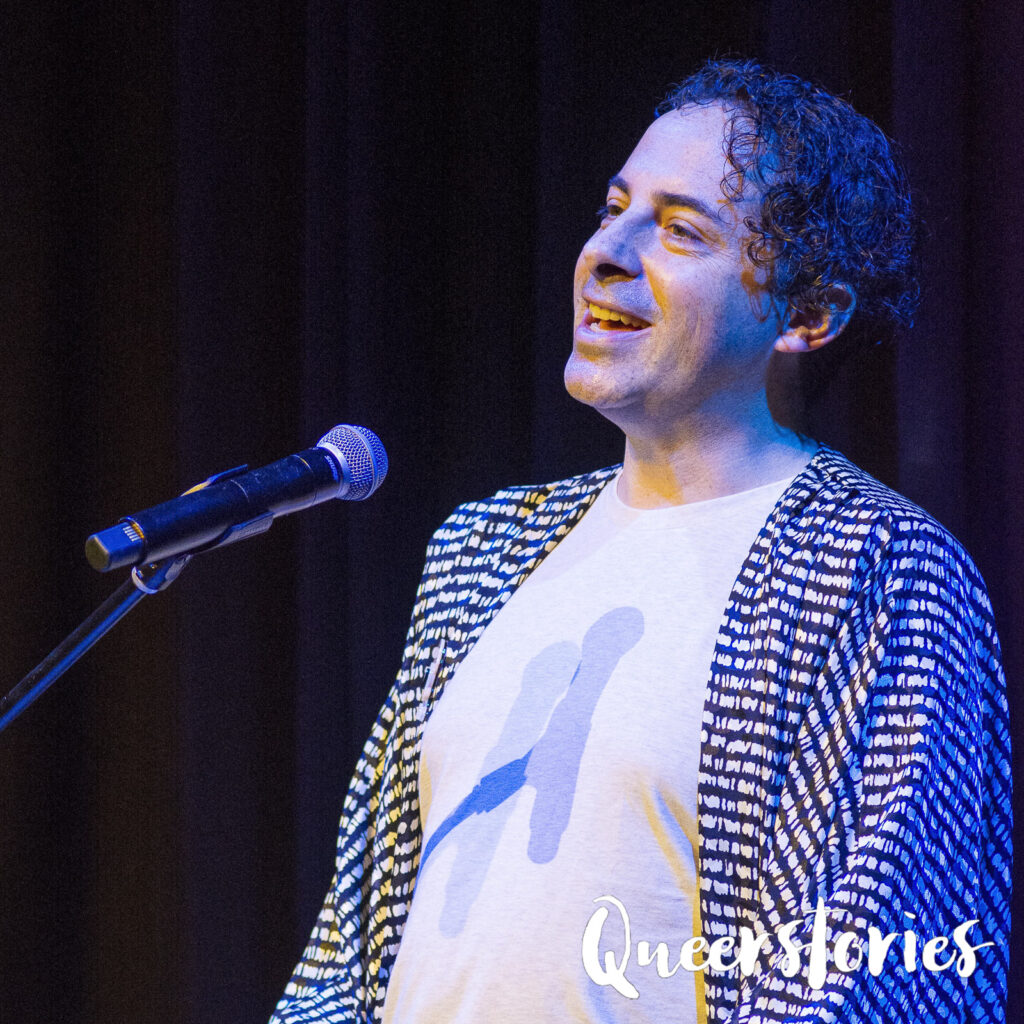 David Moutou has worked in local government in Western Sydney for the last ten years. Prior to this, he worked for Twenty10, and was a Director and Chairperson of The Aurora Group, a LGBTIQ philanthropic foundation. In the years before YouTube and Smart Phones, David performed as Sandy Toggs at The Imperial Hotel. I sat on the Aurora board at the same time as David, and was regularly delighted by his company. Especially at a certain hour of the night after one of the events when the line between David and Sandy Toggs would blur, and he and I would hit the dancefloor. Either everyone though we were amazing, or everyone thought we were ridiculous. I don’t know, maybe a bit of both. David is addicted to 1980s style aerobics and has a side hustle as a Civil Marriage Celebrant. He performed this story at Queerstories Western Sydney.

David: There is a segment that I remember from Sesame Street. The exact phrasing of it has been lost in the excitement of remembering it – and my Google efforts to find it have proved fruitless – so who knows if it was even on Sesame Street that I saw it. It was a cartoon and it started with a small girl, whom I have affectionately named Myra. Myra was sitting at a window, “Hello, my name is Myra and this is my house…” The frame of the drawing expands to show a number of houses, “… in my neighbourhood…” And, as the picture continues to zoom out, “… in my city… in my state… in my country… in my world… in my solar system… in my universe.” The picture now showed a vast space with a little blue circle, on which an even smaller black spot screamed out to be heard. The picture then rapidly zooms in, until we are back to Myra in her window, she smiles and giggles. Each frame had something identifiable – an iconic house, the recognisable shape of a state, an American flag – all symbols that Myra, or anyone who shared her place, could recognise.

At the time, I was in the midst of developing an obsession with maps and street directories. It started when my mother would leave me in the car while she went into Revesby Franklins to shop. This is the early 80s folks, leaving a child alone in the car was very acceptable back then, and my mother did leave the windows down. As she left the car, Mum would pass me the Gregory’s Street Directory and set a challenge – plan me the way to get to… Loftus or some other random suburb. I would study the maps and have a route prepared for when she returned – maybe with an alternative planned in case of traffic.

There was so much to love about a Gregory’s. Solid lines of roads on a background of soft pink. I could follow the thin red line of a suburb boundary. Challenge myself to find the red star of a police station or the fleur-de-lis of a Scout hall. When I needed a break from the colour I could turn to the front indexes and look up a postcode, or search for the most popular street name in each letter – Albert, Boronia, Church, and David (just pipping Douglas) – or I could look through the list of places of worship and wonder what a Unitarian was or what was reorganised about the Reorganised Church of Jesus Christ of the Latter Day Saints.

I was a child keen to make sense of what I was seeing and hearing in the world around me. For example: it seemed that everytime we would drive towards the City my mum would turn into busy Canterbury Road and say with a sigh: Oh. It’s peak hour. I would be staring out the window and each time mum would say this we would be outside of a butcher that had a cow on its awning sign. So, to my little ears and brain my mum was saying: Oh. It’s Pea Cow. I couldn’t
work out what was so disappointing about that butcher. It took me a long time to unlearn that association.

As we drove, I would draw my finger along our path of travel in my Gregory’s, my index moving slowly along Canterbury Road. Yet that thick black line with its irregular red dots was not the main event for me – I loved the warrens of white and yellow streets that connected the black lines. Seeing how things fit together, how the roads butted against a train line or stormwater drain and then would break through into a new suburb.

My finger continued its path as the car made our regular shortcut down Old Canterbury Road to Toothill Street, Lewisham. I become enamoured with Lewisham. Off the page, it didn’t feel like more than two set of traffic lights and a pedestrian crossing, but in my two dimensional world it was the tissue connecting the Canterbury and Parramatta arterials, the small jagged jigsaw piece that gave sense to Summer Hill and Dulwich Hill and announced your arrival into the Inner Suburbs maps with their increased scale.

Lewisham – the odd but important connection between very different things. I am sure we all have Lewishams in our lives – and to get to know someone is to get to know those places of connection.

At University I was a member of the Sydney University Catholic Society, a radical left activist, a member of Queer Boys, and the occasional host of uni events in my drag personae, Sandy Toggs. I would often be asked how I reconciled all these things, like they were separate islands divided by an insurmountable strait. Yet, the connection between things was strong and purposeful.

Back in my first year of Uni, I had received a phone call at my home from a member of a hateful Christian Uni group. He was calling me in my capacity as Catholic Society president. And he was wanting us to sign a letter of support after the Student Union kicked had them out of Orientation Week for handing out a flyer titled The Good, The Bad and the Homosexual. I refused to sign. Sexuality was not something we had discussed at Catholic Society, and I had not yet come out to anybody, but it felt completely right to be turning them down.

When I retold all of this at Uni the next day, I found I had the support of my Catholic Society committee. We wanted to understand why we felt so right in the position we had taken. So, as an alternative, we held a series of discussions on human sexuality – on different theological, sociological and biblical approaches to it and we invited queer students to come talk to us. Instead of signing a letter in support of hatred and religious bigotry, eighteen of us printed a letter in the student newspaper saying that our consciences led us to create a place of welcome, acceptance and celebration, and we apologised to any queer people who may have felt excluded or hurt by our group in the past.

The more conservative Catholic group on campus accused us of being heretics, and they wrote a letter of complaint to the Vatican, which has always amused me and I take a sense of pride in, but despite that backlash, it was a really beautiful process that I went through with that group – what we called conscience informing – and it was during those discussions that I learnt to feel proud and supported about my nascent sexuality.

Unfortunately, a few years later the Conservatives took over the group. So, the Sydney University Catholic Society of today bears no resemblance to its golden period of queer theology and social justice. This story is not a recommendation.

I got to be David Moutou, of Old Canterbury Road, Lewisham, Sydney, Australia, the world, the solar system, the Universe. I continue to trace with my finger as I travel to new places.
Thank you, neighbours, for sharing this place with me.

Maeve: Thanks for listening. Please rate review and subscribe to the podcast, and if you enjoy Queerstories, please consider supporting the project for as little as $1 per month on Patreon. The link is in the episode description.