An unexpected encounter in the hospital cafeteria awakens Jane, then a young nurse, to a career as a lesbian and an activist.

Jane Marsden is a learning and development professional and project manager. She commenced her career in LGBTI+ community organizing and activism in the early eighties. In the early nineties she was appointed to the Board of Sydney Gay & Lesbian Mardi Gras on which she served for five years. Shortly thereafter she joined the Board of Sydney Gay and Lesbian Community Publishing Ltd (Sydney Star Observer). Jane was also one of nine founding directors of The Aurora Group a wonderful group that raises funds for LGBTQI+ community projects through fabulous arts events. 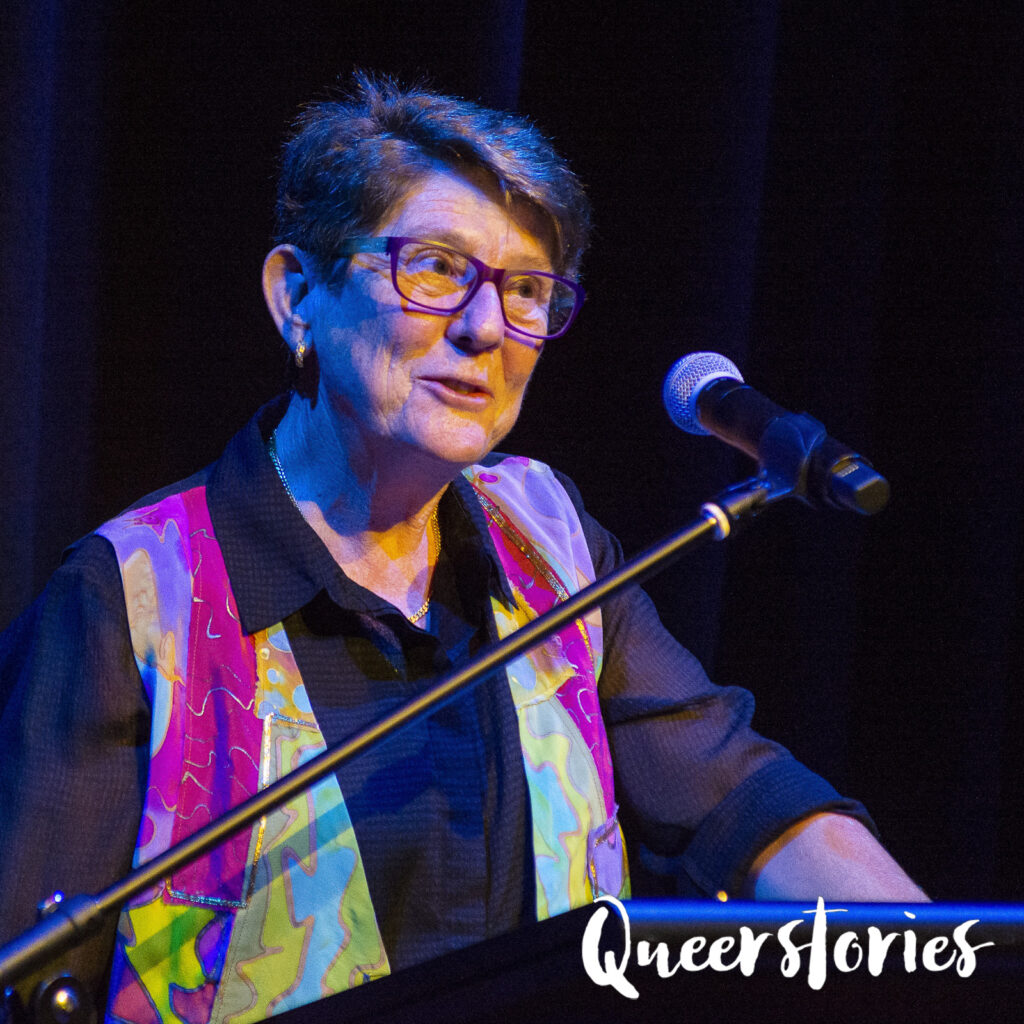 Maeve: Hi, I’m Maeve Marsden, and you’re listening to Queerstories. This week, I’ve actually been cheeky enough to program a member of my family. I like to say that I’m from a big old gay dynasty and I think my aunt’s story will explain a little to you about why. Our next speaker is Jane Marsden, though I call her Aunt Nane. Jane Marsden is a learning and development professional and project manager. She commenced her career in LGBTI+ community organizing and activism in the early eighties. In the early nineties she was appointed to the Board of Sydney Gay & Lesbian Mardi Gras on which she served for five years. Shortly thereafter she joined the Board of Sydney Gay and Lesbian Community Publishing Ltd (Sydney Star Observer). Jane was also one of nine founding directors of The Aurora Group a wonderful group that raises funds for LGBTQI+ community projects through fabulous arts events. All of these things are brilliant, but I think her greatest achievements were jumping in fully clothed to save me when I fell in my uncle’s pool when I was a toddler, and not telling my parents when she saw me smoking at Mardi Gras in 1999. Enjoy.

Jane: So I thought I’d start at the end. Well it’s not the end, it’s more like the end of the middle – Here I am, approaching 70, (Mmm, closer to 70 than to 65 now) and still living with my lover of 42 years. So, I’m a very happy old dyke and contented old dyke. In the words of the song “It’s been a good life over all”.

Like many in the LGBTQI+ communities, it hasn’t always been a good life and there were times when the journey was pretty tough. As a youth and a young adult, I was a miserable sort of person. I didn’t fit in. I was different. I didn’t know what my difference was. I tried hard not to be different and as a square peg, I found lots of round holes. I had boyfriends and heterosexual sex because . . . well, round hole, square pegs! Sadly, back in the late 60’s adolescent mental health wasn’t a thing. My brother, Jim, was my psychologist and biggest support and his girlfriend at the time included me in a range of girly activities like waxing afternoons. For those of you who know me you’ll know that beauty enhancement isn’t one of my priorities, particularly when it involves pain. However, my crush on Marion kept me engaged for a while. And now she’s my sister in law – but it was touch and go there for a while.

As I embarked on my nursing career, I must have been the only student nurse and, indeed, newly graduated sister who didn’t know any lesbians! I must have navigated this period of my life with my eyes closed and my head mostly down . . . or in a slightly inebriated daze a lot of the time, and I suspect the latter. I’d also like to say that this was happening under the gaze of a couple of closeted gay uncles – it didn’t occur to me that these two beautiful blokes who were a constant presence during my growing up, were actually lovers! Could I really have been that naïve? The evidence suggests I was!

Later, as a nurse educator at Liverpool Hospital, a couple of graduating students approached me to invite me to a social gathering at The Tavern in Parramatta because “Sister Marsden, we think you are one of us”! Really! And just what does “one of us” mean? “Come along on Thursday night to meet the group”. So, I did. And to my surprise, it was a Gay and Lesbian social night. And that was the start of my awakening.

Later still, I started a post-grad diploma at Cumberland College of Advanced Education. At the time my younger sister, Sally (who’s here tonight) was organising her wedding which occurred in May of that year – during one of the-semester breaks. I was a bridesmaid (the first and last time I performed that role). My older sister, Maeve’s mum Louise (who’s also here tonight), came home from England for the event. It was a big family thing with not just Sally’s and Reg’s family and friends but also many who made up the Royalty of Campbelltown. The reception was at my brother John’s home and by now I realised that John was a pouf! Despite John perming and dying his hair pink for the Campbelltown Picnic Races in the 60’s, I truly did not realise sooner that he was gay! But I digress!

Back to Sally’s wedding reception. By about midnight, there were just a few of us siblings left drinking and celebrating into the wee hours. My middle brother was pretty pissed and started to harass and berate John and Louise for breaking mum’s heart by being h-h-h-omosexual. He was really drunk angry. Not being one to pick my time very well, and being pretty excited by my newfound sexual orientation and identity, I thought I should be supportive of Louise and John. So, I came out too – there and then. “Well, Pete, I’m a lesbian too – 50:50, 3 boys, 3 girls, 3 gays and 3 straights – clever mum and dad”. Peter didn’t really think so and the arguments became more heated. I don’t really remember how that night ended, but I do know I was pretty upset by it.

Back at college, I carried my family misery like a badge for all to see. During the first week back a woman I hardly knew (but had noticed during first semester for a little eccentricity) approached to ask if I was all right. I said no so she arranged to catch up with me at the back of the cafeteria during lunch. (as an aside, her eccentricity went to er wearing sunglasses any time of the day, inside or out, grey or bright, carrying a hip flask which came out every now and then to top up her coffee and she was regularly late for lectures).

So we sat down with our tea and coffee, her with her flask, and she said “So, you seem pretty upset, what’s the problem?”

I replied: “Well, half my family are gay and the other half aren’t”.

There was a bit of a pause as she raised her sunnies, inspected me and asked “So, which side are you on?” She will tell you that if I had been on the straight side there wasn’t much she could do to support me. Fortunately, I was on the gay side so she was very very very supportive.

And Joy and I have been together from that day to this. [Audience applause] No idea what that date was so we celebrate our anniversary on the day of Sally’s wedding. And I’m hoping I’ve got it right Sal, the 19th of May!

Through my relationship with Joy, I gained a wonderful daughter (who’s also here tonight) and, later, three wonderful grandchildren.

There really is no looking back. But going forward from that point I found my true fit with Joy and other LGBTQI+ friends at the time. And I found my tribe when I joined the organising committee of a Western Suburbs Gay & Lesbian social group called Scandal. Indeed, I even performed at one of our events – Ode to a Gym Teacher in mime! If you remember it sing along.

“She was a big tough woman,
The first to come along
That showed me being female meant you still could be strong
And though Graduation meant that we had to part
She’ll always be a player on the Ballfield of my heart.”
[Audience applause] It was in mime and I had props then. I think it was a hockey stick.

In the early 90s, I joined the Sydney Gay & Lesbian Mardi Gras Board, and continued over a number years participating in a variety of community organisations.

I recall my 1st time marshalling on the Parade Route. I was a trouble shooter covering the entire route. At one point early in the evening, before the parade commenced, I was standing inside the barricades at Taylor Square talking to some people in the crowd. I said to a woman who was with a younger boy “What brings you to Mardi Gras?” She responded saying “I am here with my son. We came from the Riverina. He begged me to bring him. I thank Mardi Gras and all of you for giving him a place to be.”

Yep, it really has been “a good life over all”. Thanks for listening.