From humble beginnings in Yass, Neisha didn’t expect to end up a circus entertainer traveling the world. She looks back on her childhood and the moments that indicated who she might become.

Neisha Murphy is a vibrant variety entertainer and director who blends a mix of physical skill and characterisation with juggling, slack rope, hosting, comedy and a range of dare devil stunts. Neisha has worked for The South African State Theatre, Legs on the Wall, The Hoopla Festival, The Flying Kiwi Circus, Circus Aotearoa and the Kidsfest Festival in New Zealand, Circus Monoxide, Viva la gong festival, Arts Projects Australia in Adelaide, The West Australian Ballet, The Tasmanian Circus Festival, Free Associations production of The Nutcracker, The Circus Proms series with New Zealand’s Christchurch Symphony Orchestra and performed in the famous Spiegeltent in Circus Monoxide’s production of ‘Built’. Neisha is currently developing ‘NE – Non Essential’ which is inspired by the current pandemic crisis and most recently has completed a development of her theatre circus show ‘ChaChi The Variety Superstar’ with The Merrigong Theatre Company. 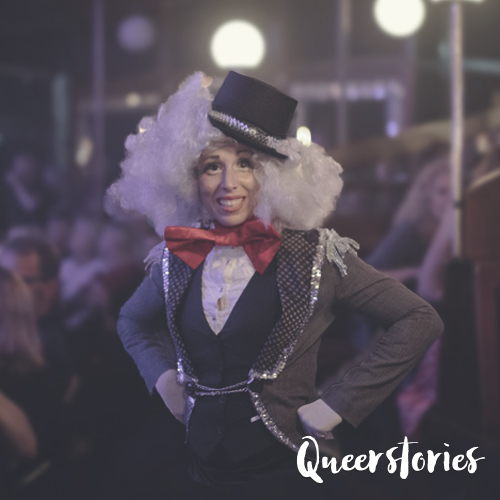 Hi, I’m Maeve Marsden and you’re listening to Queerstories. Today’s story is by Neisha Murphy, a vibrant variety entertainer and director who blends a mix of physical skill and characterisation with juggling slack rope, hosting comedy, and a range of daredevil stunts. Neisha has worked for an incredible list of theatre companies, circuses, festivals, and venues both here in Australia and internationally.

I was so happy to have Neisha perform at Queerstories. It was especially delightful as I hadn’t seen her since we studied together in Bathurst 15 years ago. To hear more about my university exploits, make sure you check out my episode in the Queerstories 2020 podcast series, Risk, on the Queerstories website. But, for now, enjoy Neisha’s story performed at Wollongong Town Hall in October 2020.

My name is Neisha, I’m 37 years old, and I’m a real-life tosser. It’s true. I’m a professional juggler, and I literally spend most of my time with balls on my face. I often get asked a lot of the same questions, so I’m just gonna quickly answer those now.

Now, I didn’t know I was going to be a juggler.

My father was a road sweeper truck driver. Try and say that three times real fast. Not now. And my mother was a homemaker and disciplinarian, who used to pull out her false teeth and chase me up and down the hallway going, “Arghhh!”

Now, I hate to toot my own horn but I’m gonna. I was actually a bit of a miracle baby. You see, Mum had had ovarian cancer and she was told that she couldn’t have any more kids. “No chance. Not gonna happen.” So, it was December 1982, and I can imagine, even though I really don’t want to, that my mum and dad just threw away all the condoms, like the good Catholics they were. No, not really. The only Catholic thing dad ever did was not eat meat on Good Friday. Amen.

So, yeah, they were doing it like rabbits – no fear of consequence – and nine months later they got one hell of a surprise. A beautiful baby girl was born to be named Cecelia! That’s what I was going to be called but at the last moment, when my little head came out of my mum’s vagina, she took a look at that face and she could tell I was unique, just like everybody else, and thus I deserved a special name. Now, coming from a small country town, the most exotic name around at that time was Karen. Dodged a bullet there.

Mum decided to go all rogue and remembered a name from her teen years that she could never forget. It was a name she had only heard once. That name was Neisha. So, I was named Neisha Margaret Murphy. Exotic, traditional, Irish.

Now, my dad is a simple man and he had just wrapped his head around Cecelia, so he actually couldn’t pronounce my name. He got the hospital nurse to write it on his arm in Texta, “N-E-I-S-H-A”, and then proceeded to go down to the pub to celebrate and tell everyone that he and Sue had just had a beautiful baby girl named Neisha. And then, as the night went on… “Nye-sha.”

This all occurred in a tiny speck of a place called Yass. Give me a, “Woo!” if you’ve been there.

Was not expecting that. Okay. So, yeah, most people know Yass from doing the road trip from Sydney to Melbourne. Halfway between the two is a great truck stop – a place to rest, refuel, and check out the sheep. It’s located about half an hour or so from the nation’s capital, in case you’re interested, and our big claim to fame was when McDonald’s came to town. A big moment. We even had the massive McDonald’s sign positioned out on the highway – our pride and joy – except when it was realised that with the giant golden arches ‘M’ next to the word Yass, it actually read ”My Ass – open 6AM.”

It’s true, it’s true. I can show you on my phone. So, we were the butt of every joke for a while.

So yeah, I grew up in Yass with my brother – a second miracle baby – and my older sister. We grew up on five acres and, when I was knee high to a grasshopper, I learned to drive a manual. Of course, I did. It’s just one of those country kids’ rites of passage, really. One of our favourite things to do was to get in our matching Datsun 120 Ys – Belinda, you’ll understand this – wind the windows down, and to drive around in the paddock and throw paddy melons at each other. Now, that’s a melon. It’s not an animal. I found out recently that’s also an animal. It’s also a melon. I’m talking about a melon.

In the country it can be a bit dangerous, but you’ve got to make your own fun. As you can imagine, there would be tears at the end of this game, and this would cause a lot of physical altercations or fisticuffs. I really enjoyed the fighting, just as long as I won.

It was around this time that I became convinced that I was going to be Bruce Lee. I had big posters of him on my wall, I watched Enter the Dragon so much that the tape deteriorated, and I slept with a flick knife under my pillow. And it was open. That was in case the baddies came in and I had to be ready. I was seven going on eight, had an epic mullet, wore a bandana across my forehead – Danielson style from The Karate Kid – and used to wear a leather jacket and nothing else. Nudey-rudey.

I remember when the first Karate dojo came to town. Mum took me to the class, and I was like a fish to water, and I think she was relieved that now I would leave my brother in peace. At the class, I was the youngest, I was the shortest, but I was totally the coolest. Yeah, I know. Everyone was lovely and accommodating and because of that environment I went on to get my black belt, become the Australian Karate Champion and, most importantly, the Yass Person of the Year.

I loved the whole experience of it. Now, you’re probably wondering why I didn’t become a karate master. Well, about eight years in, I was 16, I was training two to three days a week and then my hormones fully kicked in. I discovered peer pressure, parties, dating, and I got my period for the first time while wearing my white Gi. It was horrible.

Looking back now and reflecting on those experiences in my childhood with martial arts, I can see that they helped to prepare me to be a juggler. Juggling is a lot like karate: The routine, the training, discipline, failing, repetition. I have now been juggling for 19 years and it has given me so much: A performing career that has taken me around the world, amazing friendships with likeminded people, an outlet to turn to when life can get pretty hard and I need to escape, my amazing physique…

(A FEW CHEERS FROM THE AUDIENCE)

I thought I’d get a bit more for that.

And finally, and most importantly, it also brought my partner Lucy and I together nine years ago.

So, maybe I shouldn’t be so surprised that I ended up being a manipulator; that’s just a fancy word for juggler. And just so you know, if you touch my balls, I’ll kick your ass. Thank you.

Thanks for listening. If you enjoy Queerstories, please rate, review, and subscribe to the podcast, and consider helping me to cover the costs of editing and producing it by signing up to my Patreon for as little as $1 per month. Follow Queerstories on Facebook for event updates, and me, Maeve Marsden, on Twitter and Instagram, though that’s more for wholesome content about pickling and photos of my ridiculous dog, Dot.