Performing for 600 people at the Opera House on their 25th birthday, a birthday they never expected to reach, Liv looks back through the years and tells themselves a few things.

A dynamic and versatile actor, Liv Hewson is continuing to hone their craft with each new role. They starred in Netflix’s hit comedy series, SANTA CLARITA DIET opposite Drew Barrymore and Timothy Olyphant, performed in the 2018 feature film PUZZLE directed by Marc Turtletaub and appeared ABC’s hit comedy series BACK IN VERY SMALL BUSINESS. Their role as “Chloe” in the critically acclaimed webseries HOMECOMING QUEENS was another highlight of 2018. Liv featured alongside Zoey Deutch in the big screen adaptation of the bestselling novel, BEFORE I FALL, premiering at the 2017 Sundance Film Festival. Other credits include the 2016 Viki original series DRAMAWORLD and ON TOP OF THE LAKE. Liv’s most recent projects include the highly acclaimed feature film BOMBSHELL directed by Jay Roach, playing the role of LILY alongside Margot Robbie, Charilze Theron and Nicole Kidman. Originally from Canberra, Hewson now splits their time between Los Angeles and Australia. 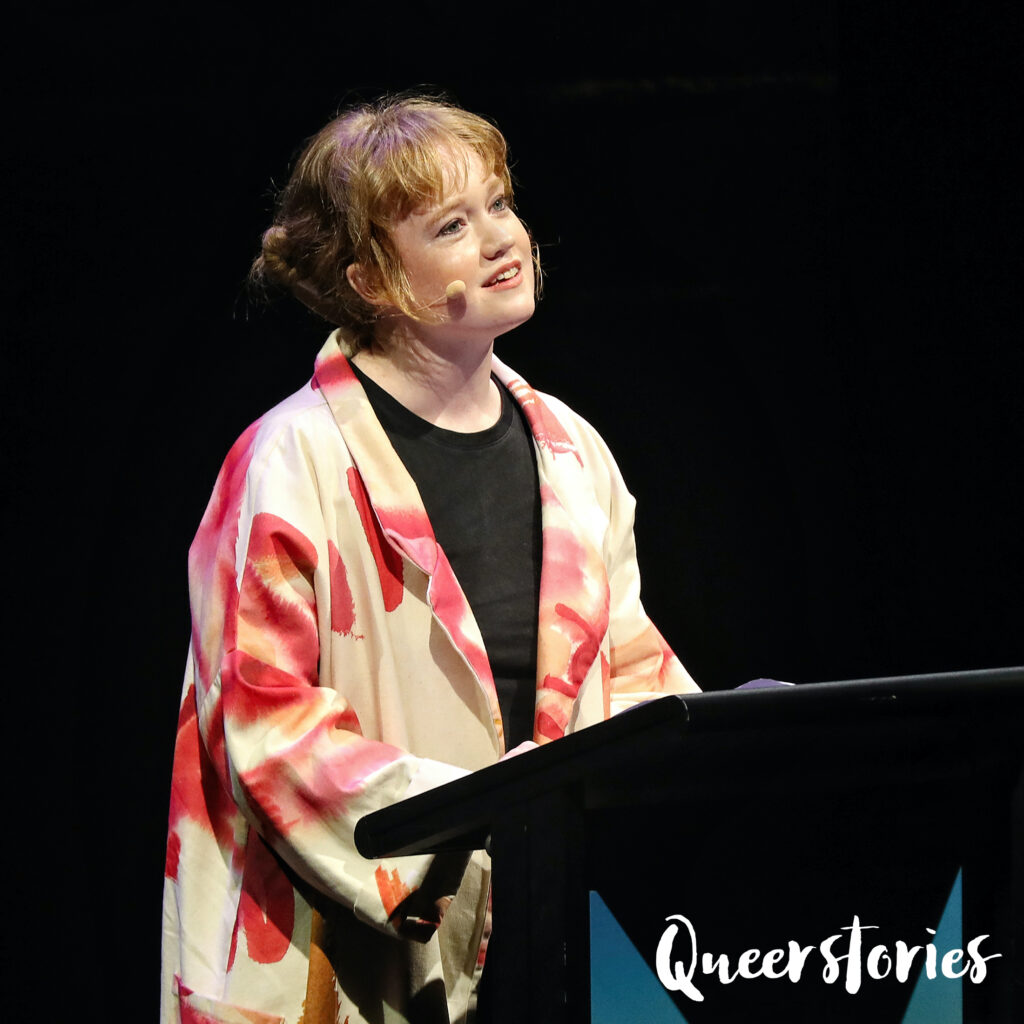 Hi, I’m Maeve Marsden and you’re listening to Queerstories. Today’s story is by Liv Hewson, an incredible actor who is, quite frankly, killing it. You may have seen them in the wonderful SBS web series Homecoming Queens or in Santa Clarita Diet on Netflix with Drew Barrymore, in drama world, On Top of the Lake, or feature film Bomb Shell, with Margot Robbie, Charlize Theron, and Nicole Kidman.

Liv splits their time between Los Angeles and Canberra, so although I’ve wanted them to share a story at Queerstories for ages, it took a little pandemic for me to finally be able to count on them being in Australia for an event. Liv performed this story at Queerstories Comes Back Out at the Sydney Opera House in November 2020 as part of Antidote Festival. You can listen to that whole event, as well as other panels and talks from the festival on the Sydney Opera House website.

I don’t like talking about myself that much. It’s hard for me open up in an honest way. It’ll usually happen when I’m drunk or overwhelmed by something else in, like, this sort of spiky wave of overshare that cuts through the vibe of the room. I’m always embarrassed to have done it, and then the next day is a cold shoulder in the face of my need to be reassured that that was fine, that that was a good idea, that I’m safe to speak about what’s happened to me. So, I’m sure you can imagine that deciding what to talk about today has been difficult.

I said to a friend, “I’m trying to do it gracefully,” and he told me that I didn’t need to be graceful, that I am, in fact, not graceful most of the time. He’s right. It’s a losing game to play with yourself: How can I talk about this without anyone knowing anything about me by the end? How can I build myself a house out of this story to lock myself inside? How can I do this gracefully? I can’t.

I even hate saying that. I hate that talking about myself in any kind of reflective capacity feels, like, heavy, like something I have to lug around with me, embarrassed to show people. And I’ve been asked to tell you all something, so it’s fine. Like, it’s fine… It’s fine.

So… I’m going to tell myself some things out loud, and you can also listen to them. Each number of thing is going to roughly correspond with the age I was at the time, in the spirit of what day it is, and we’re all going to pretend that’s a framing device, and you have to be nice to me about it because it’s my birthday.

One – “Hello, baby. Far out, did you grow all those teeth by yourself? That’s incredible. You don’t understand a word I’m saying.”

Christ, okay, I’m skipping some of these.

Six – “You are a scientist for leaving a piece of fish behind the speaker and not telling anyone. The adults around you don’t understand this, but I do. This was an experiment. You wanted to see what would happen to the fish if you left it behind the speaker for a week. That’s fine. You wanted to watch it rot but you knew that, for some reason, this was something you had to do in secret.”

I have bad news for you about the amount of times this is going to end up being a metaphor.

10 – You have written “kiss a girl” on your bucket list. The bucket list is in your diary. No one else is going to see it. You’re going to scribble it out so hard the paper tears. The fact that you want to crawl out of your skin all the time is going to be politely tucked away to deal with in the nebulous “later”. This is a terrible idea.

13 – In between filling out Am I Gay? quizzes online, you manage to make time for the one about depression on the Beyond Blue website. Result is grim. No surprises there. Your mum’s not going to take you seriously about it. She will, years later, apologise for this. Don’t hold it against her in the meantime. She doesn’t know.

14 – You haven’t heard of gender dysphoria yet, but it’s happening. You have heard of anorexia, but that won’t stop it from happening either.

16 – You are not old for your age. That’s a lie. You shouldn’t be at these parties and a 26-year-old woman should not be dating you.

17 – Substance abuse at school stops feeling glamorous when the police show up. Burning out and transferring does not feel like a coming-of-age film, it feels like shit. Every terrible thing that hasn’t happened already is happening now. It is not the natural way of things. It is not what you deserve. You are not being cosmically punished. It will end.

18 – You are now older than you ever expected to be. Every year, this is true again. We’re record-holders now.

20 – So about now is the final time you try to double-check whether or not you’re a lesbian. The male friend of you sleep with for a bit is going to be so, so nice about it. You’re going to bring two takeaway coffees to his house as a sort of consolation prize for the conversation you’re about to have, and you’re going to sit on his bed, tell him you’re a lesbian and immediately burst into tears. He’s going to say beautiful, calming things to you about it, give you a hug, and take you back to the cafe you got the coffees from. You’re going to eat eggs and keep being his friend.

21 – Up till now, you’ve been so anxious about breaking US law and getting deported that you’ve had panic attacks at the thought of trying to get into a bar. Look me in the eyes. This is ridiculous. Americans get fake IDs at 18. No one in America enters a bar on US soil for the first time 21 years of age, except you. Please go back to therapy.

22 – It’s possible to be in a polyamorous relationship and still get cheated on.

24 – For someone who says, “I want to rip my adolescence up and start again,” as often as you do, that’s not actually the case. What you really mean is, “I want to rip my sexual development up and start again,” and you know what? that’s actually fair enough, but it’s not possible. There is an upside. You have time. You’ve been told for years that sexual maturity Is in the eye of the beholder, which was convenient because it allowed the beholder at the time to hurt you very badly. So, how about this; now the beholder is you. What do you feel like doing? I know nobody’s really asked you that before. You don’t have to have an answer now. You don’t have to have an answer ever.

25 – The people you love will never all be in a room together because there are too many of them. They live in too many different countries, across time zones that will never line up completely. There will be no party you can invite them all to. They will never meet. It’s not possible. Their lives are too different across too many planes of time. There isn’t room for all that love anywhere in the world. And isn’t that wonderful? Isn’t that just the best thing you’ve ever heard? Isn’t that what community is; limited by and ‘as big as the world’? And aren’t you happy to be here?