Award-winning poet Omar Sakr shares some of his work, inviting the audience into his process and passions.

Omar Sakr is an award-winning poet born and raised in Western Sydney to Lebanese and Turkish Muslim migrants. He is the author of These Wild Houses (Cordite Books, 2017), which was shortlisted for the Judith Wright Calanthe Award and the Kenneth Slessor Prize for Poetry, as well as The Lost Arabs (University of Queensland Press, 2019), which was shortlisted for the Judith Wright Calanthe Award, the John Bray Poetry Award, the NSW Premier’s Multicultural Literary Award, and the Colin Roderick Award. The Lost Arabs has also been released in the US through Andrews McMeel Universal. In 2019, Omar was the recipient of the Edward Stanley Award for Poetry, and in 2020, the Woollahra Digital Literary Award for Poetry. Omar’s poems have been published in English, Arabic, and Spanish, featuring in the American Academy of Poets’ Poem-a-Day, Prairie Schooner, The Margins, Tinderbox, Wildness, Peril, Circulo de Poesía, Overland, Meanjin, and Griffith Review, among others. He has also been anthologised in Border Lines: Poems of Migration (2020), in the Anthology of Australian Prose Poetry (2020), in Best Australian Poems 2016, and in Contemporary Australian Poetry (2016). A widely published essayist, Omar’s creative and critical non-fiction work has appeared in The Saturday Paper, The Guardian, The Sydney Morning Herald, Archer, Meanjin, Kill Your Darlings, Going Down Swinging, SBS Life, The Wheeler Centre, and Junkee. His essays have been anthologised in Fire, Flood, and Plague (2020) and Going Postal: More Than Yes or No (2018), and his short fiction has appeared in Kindred: 12 Queer LoveOzYA Stories (2019) as well as After Australia (2020). 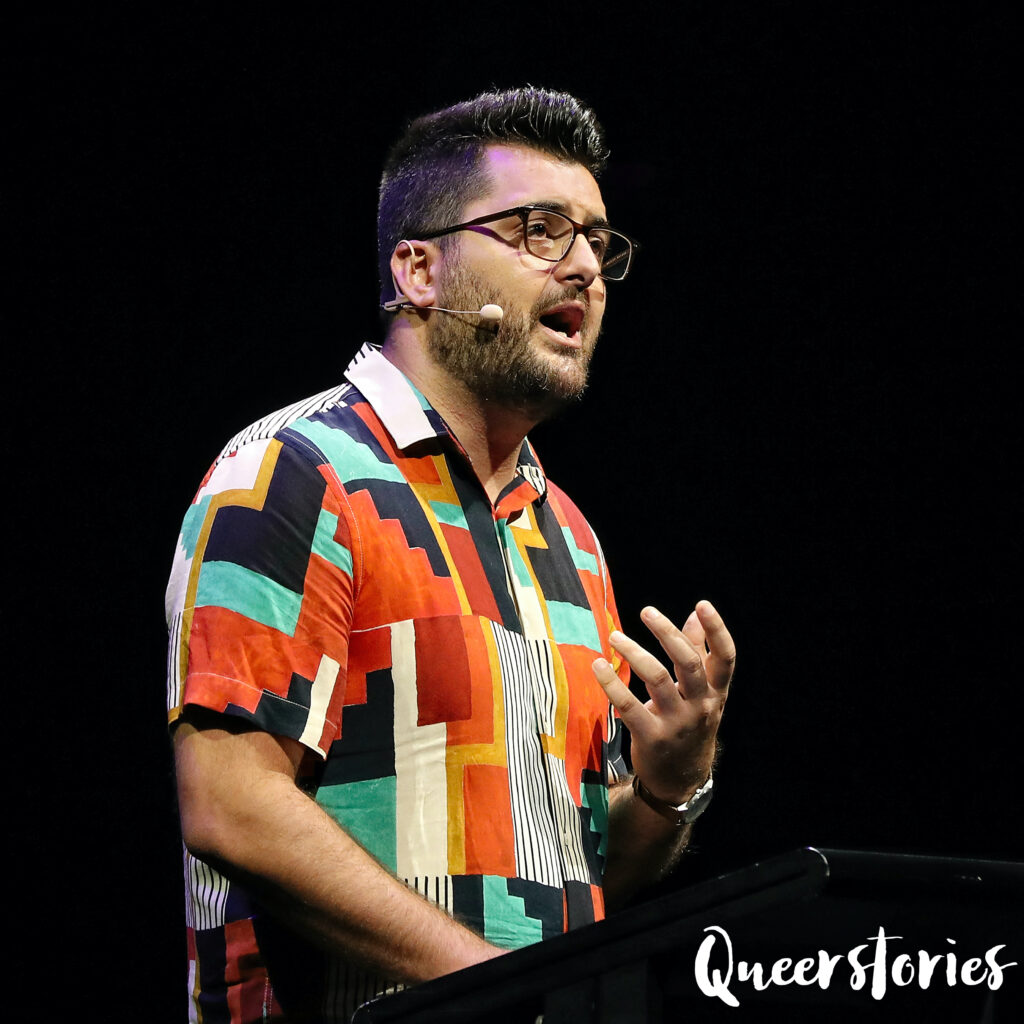 Hi, I’m Maeve Marsden and you’re listening to Queerstories. Omar Sakr is an award-winning bisexual Arab-Australian Muslim poet from Western Sydney. His latest book, The Lost Arabs, has been shortlisted for, and won, a litany of awards. Make sure you look it up. This story was performed at Antidote at the Sydney Opera House in November 2020.

Uh, okay. That’s never happened before. Nobody ever cheers for Liverpool.

And I was raised by my auntie and my mother, two single Arab women who were high school dropouts, and had children they didn’t know how to care for. And it was… How do I even begin to explain to you?

Liverpool… Okay, so we lived in Lurnea near Prestons. Liverpool was the city to me, okay? And you can fast-forward 30 years to now, to the place that I only ever saw on TV, and, yes, I’m short-listed for all of those awards I haven’t won… (LAUGHS) but it’s very, very strange for me to be here in a country that I feel is always trying to kill Arabs and Muslims in language, as well as deed.

And so, what I was thinking about backstage is, how is it possible that this nation produced me and also the man who massacred 51 Muslims in Christchurch last year? How is it possible that it produced me, and also the soldiers who murdered children in Afghanistan, just for fun? Just saw two boys on the side of the road and cut their throats and dumped their bodies in a river. And then people act surprised when the report comes out.

And I’m not surprised, because I would read Andrew Bolt’s words every other week, or Piers Akerman, or Pauline Hanson, or even Peter Dutton, our current Home Affairs Minister in charge of our borders and immigration who, four years ago, said that letting in Lebanese migrants in the ‘70s – that’s my family – was a mistake.

I don’t have a tie-in to this, by the by. It doesn’t really relate to the works I’m about to read. I’ve just… I’ve been reflecting very much on this lately, and I just realise it has very little to do with me and a great deal to deal with you, to deal with our society and what it wants to be. So, I wasn’t sure if I was actually going to come here tonight when Maeve asked me to fill in. I have a great deal of affection for Maeve and the incredible work she does with Queerstories. And I had a couple of people reach out to me over the past week, Arabs and Muslims, who said to me that my writing made their lives a tiny bit easier.

And I realised I had this delusion that I was somehow going to be able to stop… this nation, change this nation from the kind of murderous entity that it so often is. And I’m done with that delusion now, but I do still want to read my poetry for those people who find that it makes their lives just an inch better. And so, now this is going to be the worst segue in history. I’m going to read a poem about the ancient queer art of selfies. It’s called The Golden Hour in Unit Block 10… where I lived. Don’t look it up.

My friends tell me the day’s most spectacular band of light occurs at its end, before the bend, the long delve into dusk, and that it hits my bathroom in a burst of glory that is perfect for selfies. I believe them, though I never knew beauty to keep a schedule. I try to fix it in mind, to be ready for its arrival, and I miss it every time, finding the ordinariness of the sun’s leavings or the dimpled blues of night instead. I try to capture the self, like everyone else, regularly, and when I do, I position the camera just so, the body just so, aiming not for vanity but familiarity, what I recognise as my golden hour. I practice my death like this.

After doing the laundry, putting all the empty versions of myself out to dry, I take photos of my naked ass, my huge haunches and fancy I know how to reveal what is hidden. What we hid used to be called intimate: a low cry, an uncle’s creeping, how little we had to eat. Now our intimates fight for space on the line. The hill’s hoist can carry only so much of our undressing. I resist placing my wife’s soft parts here in the sun among nameless men, midnight mementos. I need every morsel of tenderness I’ve earned, yet still you ask for more. The you is poetry. The you is I.

I’ve fathered several children who do not know me. This nightmare recurs. When the dark is absolute, my love crosses from her side of the bed to mine, burrowing under my body with cold hands and colder feet, drawn across dream to my warm slowing, my gathered hours. She cannot sleep without the pressure, she says. I cannot sleep at all. Alone with my other half, I am a restless moon begging for a man’s heel, a band of light made purely to praise another.

This poem is called Love Poem for the Honeymoon Phase that Doesn’t End because I was tired of people telling me that it doesn’t end. And it hasn’t. And it won’t. And so, this is for Hannah.

I look at you: and love.

I worry around ease, and infinity.

How can you trust what is unmarked

by labour or scarcity?

Nor do I need my eyes at all

I think of you: and love.

This grace others my nights the way

There is too much space.

Life is endless in its potential

terrors. I hear you

and love—always, as an invisible

When did I learn to value the ache

over the song? The sin over

the Eden that preceded it

to say a name without

than the soft touch of joy.

Or so I imagine in a body

made by tragedy. Isn’t it

is easy, or else that I have worked

all my days and sleepless nights

for this and nothing else?

Isn’t it possible we are worthy

no matter what, tell me the truth

no, wait, tell me what you trust.

I have one more poem, and I wrote this at the beginning of the year when this phrase came into our lexicon and our shared vocabulary. It’s called Diary of a Non-Essential Worker, and I think it’s particularly apt for this space.

Did you know violins can shake the earth? Such sweet vessels, tiny planetary throats. I was sent an orchestra. They made music, a sorrow, a soaring, that shivered the dirt.
I followed the notes to a barbarism. The composer said he created the beautiful hour
as a space to think about war, and I heard my mother’s name, a dark cascade of her, I saw again the clamour behind her manner, her harrowed glamour; I am claiming all of it now not as a violence, but as an inevitability, always justifiable. I guess
I don’t want to lose her, no matter the bruises. I haven’t seen her in weeks, a memory of cherries, a perishable delight. I stay home, she stays home, and with this distance we become old battlefields, able to appreciate our damages without adding to them. How lucky we are to have homes. How likely it is we will lose them. Months ago we couldn’t breathe and smoky miracles pulverised the sky, our fussy lungs.
Everything is a miracle when you are alive. I am learning that against my will. Today I was sent a pink dwarf kingfisher, a bird thought extinct for over a century, and still, it was someone’s job to look for her, someone waited, camera in hand, for a glimpse of a glorious beak. Outside, I hear the camaraderie of ordinary wings, the chatter
of birds we call pests. They don’t seem to mind the lockdown. I dare say they are having fun, a lark. I call my landlord, ask for a reprieve, and hear only birdsong.
He’s having fun. I walk out into the park, where, months ago, a man was stabbed near to death; I sit on the bench close to the stain his blood left and receive a text reminding me to care about Kashmir, and Gaza, and our Uyghur brothers and sisters, who I never stopped caring about, and for whom my care did nothing. Forgive me,
I sometimes mistake grief for care. The orchestra follows me under the foliage,
the violins unrelenting, the world shaken to their curvature, their high-strung demands, as I sift through the scattered lyric of my shattered life to find a way to love
a woman, and the birds weave and whirl in the green, laughing at this non-essential work.