Sometimes the inspiration to change your life can come from unlikely places. Sarah shares the story of meeting the person who inspired her to apply for MasterChef Australia.

Best known as one of MasterChef Australia’s favourite contestants from 2017 and 2020, Sarah Tiong’s passion for and love of sharing food is a joy to watch and be a part of. Sarah is the successful author of the sensational cookbook Sweet, Savory, Spicy and owner of pop-up market stall Pork Party. However, Sarah wasn’t always chasing her dreams in the hospitality industry. Growing up in a conservative, traditional Chinese-Malaysian family and carving out a career as a lawyer, Sarah found herself facing challenges and expectations to overcome in order to follow her passion and create her own path. 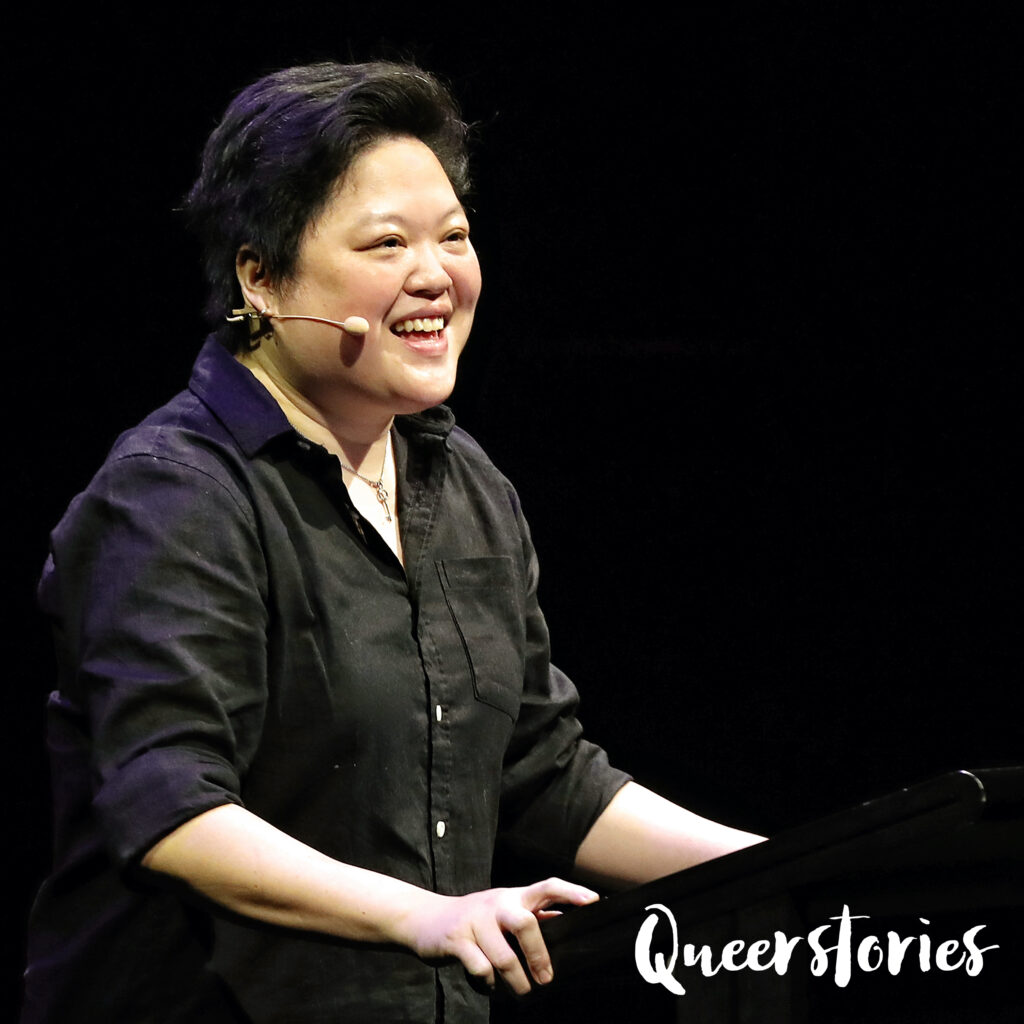 Hi, I’m Maeve Marsden and you’re listening Queerstories. This week, best known as one of MasterChef Australia’s favourite contestants from 2017 and 2020, Sarah Tiong is the successful author of the sensation cookbook, Sweet, Savoury, Spicy, and owner of pop-up market stall, Pork Party. She basically saved 2020 by flirting with Katy Perry and Melissa Leong on national television, so I was so thrilled when she was up for performing at Queerstories Comes Back Out at the Opera House, even if she cooks a lot of pork and I’m a vegetarian. Enjoy.

Wow. Thank you so much, and I’m both equally happy and terrified to be standing here to speak to you. One of the most common questions I got asked after MasterChef was, “Why’d you apply?” And without fail I’d say, “I come from a family that loves to cook. I wanted to test my skills and push myself.” And it’s not untrue but it’s not the whole story. The truth is, whenever I spouted my rehearsed answer, a certain face pops into mind every time and it’s the face of my friend Rio.

I met Rio in 2013. We were both in The Hague as part of an international peace and security working group. I was trying to be a very serious person back then. I had a 10-year plan and I felt like I had to tread that straight and narrow path to corporate success. Rio was the opposite. I mean, she was genuinely raised by hippies in the mountains. And her overarching goal was to be a good human, not just in a philanthropic sense but to experience as much as she could: All the thrill, and love, and boldness that this world has to offer.

And when I think of Rio, I see eyes with green and hazel swirls, kind of like a chocolate and green tea soft serve. I see blushing lips and an almost sharp-ridge length of her nose, and that loud Californian lilt in her voice just made her sound so positive and fearless. But the reality is, Rio had actually experienced a lot of fear and chaos and solitude in her life, and she used to say with every fear she overcame, the world looked a little different.

So, one day I asked her, “What’s the world look like to you now?” As I covered her toes in prickly, cold sand. It was just the two of us alone on this beach in The Hague, and it was before dawn. We’d partied all night and somehow found ourselves wrapped up in a doona together. We’d ripped this donna off someone’s bed back at the house. And she said, “It looks pretty good from here. You make my world a little less lonely.” And I looked up at her face and she was staring right at me, and, oh, my God. It was like out of some sort of stupid Christmas rom-com. I felt hot and gassy, and I said the only thing I could think of.  “I think I like you.” She laughed. “You think or you do?” And I panicked. “W-w-well, d-d-do-d-do you like me?”

And her eyes twinkled. And, goddamn those gentle creases at the corners of her eyes as she smiled. “Oh, no, no,” she said, “you don’t get to hedge your bets. Tell me how you feel.” And I couldn’t look at her anymore even though I wanted to. You see, I’d grown up with this idea that making prolonged eye contact with someone was far too confronting, too intimate, and so stared at my feet, buried in the cold, damp sand, and I just wanted my whole body to sink in its darkness. But all summer, Rio had been encouraging me to reflect on this sort of internal shame, this unnecessary shame, and she wanted me to express myself.

“I’m scared” I said. And I could feel her watching me, head tilted, daring me to look up at her. There was this awkward beat, and then she nudged me with her knee and made me look at her. And I stared back at those green tea eyes, and maybe it was the sky turning pink and blue, but they seemed so much more golden now. And she leant in. “Doing things and saying things you’re afraid to makes you brave,” she said. “And when you feel a little brave, you take on the next scary thing. And then the next, and soon enough, you’ve got so much bravery that you’re finally living.” Oh, my God. She really was raised by hippies.

And by this stage, we’d made eye contact for a full 27 seconds and my ears were surely on fire. And then, she leant all the way in, and she kissed my bottom lip. And I found that moment of bravery and l leant in, my lips chase hers, but she’d already backed off. She said it was pretty obvious we liked each other, but she was still in love with someone else back in Chile. She’d promised him that she’d return and work things out. “I’m sorry,” she said softly. She shuffled closer and put her head on my shoulder, and I was crushed.

In a matter of days, I’d be returning to life that I wasn’t sure would make me happy. I mean, sure, really solid education, strong family principles, and a corporate ladder to climb. It sounded so… secure (CHUCKLES). But I was underwhelmed and unsatisfied. Meeting Rio and being instantly drawn to her had triggered some sort of transformation in me. I’d found this urgent need to pursue the things that made me happy, to be loud, to be passionate, to fill the space that I take up so wholly, and to try to impact people’s lives.

Back on the beach, Rio tried to lighten the mood. “You’re such a sap. You’re my twin flame.” And I laughed. “What the eff was a twin flame?”

“We were meant to find each other,” she explained. It turned out that while Rio was teaching me to be more bold, and more expressive, and open, I was teaching Rio a few things too. She said that I’d taught her the meaning of home and family, and that she wanted to reconnect with own her family because of me.

“Sarah, you’ve spent the entire summer cooking for everyone,” she pointed out. “You’ve taught us about food and culture, and shown us a different way of showing love for others. I’m pretty sure food and cooking is what makes you happy. Maybe you could do something with that.” And I just stared at her. Give up my career as a lawyer? Pursue my passion? Be happy? Surely, my stereotypical Asian parents would disown me. (CHUCKLES).

Fast forward to 2016. I’d lost touch with Rio, and I’d spent the last three years in a life that was perfectly… fine. I was climbing that corporate ladder but every week and every spare moment, I was cooking, cooking elaborate meals, learning about food, experimenting, and on some level, I was still unfulfilled.

Late one evening after a remarkable round of work drinks, I found myself back in bed doom-scrolling through Facebook, as you do, and an ad popped up, you know, considering all that food research I’d been doing. “Applications for MasterChef 2017 now open!” And my instant thought was, “Oh, shit yes.” And I remember I had to tell my mum about the application a few days later. See, I needed that time to build up that courage. So, heart thumping and hopeful, I found her in the kitchen cooking, and I remember saying to her, “Hey, Mum. I’ve applied to MasterChef. Oh, don’t worry. I’m not giving up my job as a lawyer, I’m not becoming a chef. But just once, just once, I want to cook with the best. And if I pass the auditions, we can- we can decide what to do but, if not, I’ll just go straight back to work. I promise.”

And I remember Mum turned around to me really slowly, meat cleaver in hand, and a very, very disapproving look in her eyes. And let’s just say, I had to spend the next few months finding and collecting those moments of bravery. I of course did pass those auditions and, in January 2017, was due in Melbourne to start filming. And Mum wasn’t onboard, and that feeling of going against the grain and failing expectation… (EXHALES) it ate at me, it really messed me up. But I’d collected all of these moments of bravery, and I felt like had to see this through just for the sake of my happiness.

And I shit you not, the first day I got to Melbourne, I received… I was an absolute wreck. I received this text message from an unknown number, and it says, “Hi Sarah, it’s Rio. I can’t believe we haven’t spoken for so long. I think of you often and I wonder what you’re doing. Wherever you are, I hope you’re being brave. I’m back in Cali with my family, we’re heading into the mountains. I hope I’ll see you soon.” Twin flame! (LAUGHS)

And, of course, I ended up doing the MasterChef thing twice. I mean, it made me happy, but looking back, applying to MasterChef was never about testing my skill. It was about proving that I wasn’t limited by the expectations of my parents or culture, that I could do something fulfilling and fun and extraordinary just for myself. And, I guess, without experiencing Rio’s friendship, I never would have had the bravery to accept and practice the kindness that I owed myself or embrace that growth that comes from overcoming fear. (CHUCKLES) I never would’ve cooked for hundreds of people, I never would’ve written a cookbook, I never would’ve appeared on tele or shared a little part of my heart and soul with so many people.

And I guess it’s just like Rio says, doing things and saying things that you’re afraid to makes you brave. And once you feel a little brave, you take on the next scary thing, and then the next. And, soon enough, you have so much bravery, you’re finally living.

I wish you all a moment of bravery.

Thanks for listening. Please rate, review, and subscribe to the podcast, follow Queerstories on Facebook for updates, and me, Maeve Marsden on Twitter and Instagram. If you enjoy Queerstories, consider supporting the project on Patreon. Even one dollar per month helps me to continue to share these amazing stories with the world.