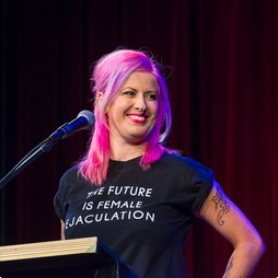 Circa 2012, Larrakia country, Darwin. It’s 40 degrees.  Foundation is dripping down my face. Mascara is stinging my eyes. I can no longer remember the source of the bruises but can feel the swelling as I bend down to rifle through my essentials. I can smell the fake tan under my armpits and peel off a couple of flakes from behind my knees.

Everything is strung together with either zippers or Velcro. The boots held together with gaffer tape. White dust covers my palms and my inner thighs. Hairspray glitter coats my torso. I scrape off leftover candle wax from my chest with a baby wipe. I’m on the showgirl contract at the HoneyPot Club. It’s my seventh of the ten shows we are contracted to do each week, and this is my last of a three-week stint. It sounds glamorous, but life as a stripper mostly consists of laundry and parking fines.

Here we do three 15-minute shows at three different venues within the space of an hour and a half, so I literally arrive saturated in sweat. I have that classic stripper look, which is basically the perfect mullet because your own hair has been so fried by peroxide that it’s all burnt off on top, and then you have these lush extensions that are unrealistically long and ratty, because the synthetic hair is a nightmare to brush. Some bruises have obvious origins: From crawling around on concrete floors, from lay-backs on the pole, from your bra clip digging into that middle vertebrae when you’re on your back. But then there are the general mystery bruises, which mean I’m all dolled up in expensive costumery looking like I’ve fallen down about ten flights of stairs.

I’m well practised at dancing with minimal infrastructure. Sometimes at the lunchtime shows in Sydney, they just turn on your music in the middle of the RSL, and you come out from the toilets in broad daylight, competing with the horse racing…

.. and basically just get up on somebody’s pool table, in the middle of someone’s game, and just start taking off your clothes. But here in Darwin, there is this sea of high vis and stubble. All the tradies have arrived en masse and it’s like my wildest wet dream. The sweat’s dripping, my lactic acid’s pumping, the carpet burn is stinging, and I’ve genuinely never felt so sexy. We’re not meant to touch the customers but secretly I quite like to maul them in some kind of spectacle gang bang, but instead I restrain myself to doing handstands in their laps, and trying to distract them from the fact that I’ve got heat rash, I’m highly flammable, and I haven’t washed my g-string since last weekend.

In the daytime, all the strippers live together in the Honeypot house, where we spend most of our time lying about in underwear and no makeup, and complaining about how dead the club is and watching all five seasons of some TV show I’ve never heard of, but which is suddenly completely captivating, and I can barely get off the couch to reach the two-minute noodles.

Four nights a week, we do shifts in the Honeypot Club. In the Honeypot club, it’s freezing cold. The air conditioning only has On or Off, and that means all of us – and let’s face it, apart from security, and the bar staff, and the management, we are all in very little clothing – are basically getting pneumonia. There’s only so long you can huddle in the bathrooms for warmth before they want you back on the floor for the 2 AM lesbian double, and yet and nobody seems to care that workplace air conditioning is a frankly a gender equity issue.

If we’re lucky, we get private shows outside the club for someone’s buck’s party or hen’s night. Bucks parties are one of those bizarre rituals of monogamous culture, where you apparently say goodbye to life as you know it in your last night of freedom; something we can all look forward to post-marriage equality.

But Buck’s parties are pretty standard. The main job is try to prevent them from spilling beer on your rug, or putting their dirty hands on your clean toys, to surreptitiously filming your show. Usually, I chose vibrators that are modest in size because there’s minimal time for warm-up, but if I’m feeling like a bit of a size queen I would choose something a little more impressive – maybe an 8-inch or a 10-inch – you know, for a workplace challenge. It’s important to keep working on your professional development.

Fruit and veg shows are my favourite. You can’t go past a self-lubricating cucumber. Bananas are always a hit because you can put them in, and then ask a volunteer to peel them and take a bite. It’s visually stimulating and nutritionally responsible.

Which sounds dramatic but I’m not sure what men expect when they lean in so closely to the podium. How else are we going to get the correct angle on a fan kick? And then there are those everyday occasions where you fall over in the first 10 seconds of the show because you’ve opted for 7-inch heels instead of six, or you burn your hands from lighting hair mousse on fire, or you end up with welts on your labia from using the wrong kind of candle wax that melts at too high a temperature…

Or you lose a sea sponge inside yourself, and you have to go to the doctor for them to get it out with a speculum and forceps.

One particularly memorable stripper fail was at Calendar Girls in Christchurch, and I’d forgotten my shower gel for the bath show. So I did the obvious thing and I used ordinary washing-up detergent from the club kitchen. And so, I’ve done the big entrance, I’ve done a song of chair work, a song of floor work, a song of pole tricks, I’m now nude and it’s time for the slow, sexy finale. So Rhianna comes on and I get out my soapy bath, and I stand there perfectly poised; one knee bent, chin up, back arched, the sponge above my head, and I just pour this acid-like, oven-cleaning quality detergent directly into my eyes.

And of course, I can’t see a thing, because my eyes are on fire, and it’s a four-minute song, so I just do the entire song essentially with my eyes closed, because I can’t get off the floor now without breaking an ankle. And the worst part is, at the end of the show, you’re meant to do a lap to collect your tips. But by now, I’ve spent a good 15 minutes backstage pouring water into my eyes with shot glasses, so by the time get back on the floor, I’ve got straggly hair, the bloodshot eyes, and I’m asking customers if they’d like to just slip me a 50.

But I think my most spectacular stripper fail was at the Imperial, the time I thought it was a good idea to cut off fetish tape with a Stanley knife because it matched my outfit, and I cut right through to my muscle and went to hospital for 14 stitches.

That was a good lesson in why colour-coordination and thematic consistency should not take precedent over occupational health and safety.

So anyway, here we are, back in Darwin, lying on a tarp, surrounded by about 20 guys and someone’s mum. I’m making eyes at the audience, and I’m lubing up my toys, and I’m thinking, “This is all going well. I’m going to take my 350 bucks, pay off some of my HECS debt, buy some groceries.” I knew it wasn’t lube the second it hit my labia.

I knew it wasn’t lube the second I felt that sting. And I looked down into my polka dot bag of show toys. It was not lube. It was hand sanitiser.

I’m just going to let you sit with that for a minute: I’ve just put a good dollop – and I’m in a few 50-cent coins-worth of hand sanitiser on my vibrator, and then inserted it into my body. But don’t fear -I’m a professional. I remember what I always told my pole dancing students in the event of some kind of disaster, or if you have a total mind blank and forget the entirety of the choreography: If in doubt, just body roll. So I lie there smiling, pointing my toes, letting this dry, antiseptic, alcoholic irritant seep into my internal membranes, and I just body roll. Thank you.