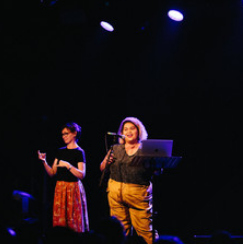 Hi. I’m Maeve Marsden and you’re listening to Queerstories – the podcast for the LGBTQIA storytelling night I host and program in Sydney and Melbourne. Next up – Tarneen Onus-Williams is a  Yigar Gunditjmara, Yorta Yorta, Bindal and Torres Strait Islander woman, passionate about decolonisation, resistance and young black people. She hit the news in 2018 when her comments at an Invasion Day Rally were taken out of context by people who don’t really understand metaphor. I was thrilled to have her perform at my inaugural Melbourne Queerstories in February just a few weeks later.

You would’ve heard a lot about me in the last three weeks, maybe. Do you read The Herald Sun, The Australian? Obviously. Don’t answer that.  But, you probably thought you’d hear about all the bad things that I’ve done, but I’m here to tell you that there’s so much more. Tonight, I’m here to tell you about four times I was a scammer.

It’s funny that I got on your laptop today, and I was like… Because it got stolen, I was like, “Fuck. I’m shit at this scamming game.” Anyway, so the first time, I was five years old. When I was younger, my family and I were really religious, like Pentecostal. Part-time, though. Only part-time. I got baptised three times as a child. I think that was two more times than you’re supposed to.

That’s why I said “part-time.”

Back then, we used to love the Hillsong album, the ’98. Touching Heaven and Changing Earth. I was researching these songs, and I was like, “Oh, my God. Jesus, You Gave It Your All. Holy Spirit, Rain On Me.” Fuck, I really got into it too. I was listening to them for an hour. I was like, “I need to turn this off now.”

Anyway, my dad, he used to take me to the TAB. Yeah, he used to sit me up at the bar, and my brother’s girlfriend used to work there as well. He’d buy me raspberry lemonades and Burger Rings. I used to love to put them on each finger and eat them. It was so great. My dad used to obviously bribe me with raspberry lemonade and food, so I wouldn’t tell Mum that he was gambling, ’cause he loved the horses. That was when we were into “The Man Up Above.”

Yeah. Anyway, me and my sister, we used to call everything “Devil.” My brothers would listen to V TV on Saturday and watch South Park. I’d be like, “Mum, Dad! They’re listening to Devil music!” And, “They’re watching a Devil show!”

I remember one day, we were driving past the TAB in town. I pointed out the window. Mum was in the front. I was like, “Mum, that’s where Dad takes me – to the Devil House.”

Fair to say that Mum and Dad’s holy life didn’t last long, but the scammer was, my dad thought he was scamming me, but I ended up scamming him.

The second time, I was 11 years old. I used to live in a country town called Portland on Gunditj country. It’s about four or five hours west of here. We were pretty poor growing up. This was after my mum and dad broke up. We lived in this poor neighbourhood. We used to call it the Bronx, even though it was mostly white people.

But, there were heaps of drug dealers and other stuff. White people are drug dealers too. [inaudible 00:04:04] But, we were lucky enough to have a black family across the road and they had heaps of kids. We just called them the Coopers. Not, you know, Julie Cooper and Marissa Cooper. Anyway, they had two kids who were the same age as us – Kirsty and Sean. My mum, she was really cool with technology. We had a computer; we were the only kids in the neighbourhood that had a computer. We had a printer as well, but this lucky day we had ink.

We printed off a list of prizes, and we sent to Safeway; Safeway, not Woolworths. Anyway, my sister, Kirsty, Sean, and I used some of the coins that we stole from our mums, and we went and put it towards buying raffle tickets from the supermarket to sell. We took our list. The list flow-printed out, looking really professional, was a list of prizes that we made up. We walked around the neighbourhoods that had more money. Obviously, I was an anti-capitalist back then too.

And even stopped [inaudible 00:05:20] this old lady, who would give us free food and let us play with her old son’s toys. We’d hang out there. We even made her pay for a raffle ticket. I remember the prizes. We really loved Cadbury chocolate. I remember we’d go to the footy, watch my brother play footy, and they used to have meat hampers, so that was the number one prize on the prize list.

Anyway, we ended up making like 50 dollars from this fake raffle tickets. We split it and bought heaps of lollies, so that was the second time I was a scammer.

When I was 13, I found this poem, and I guess you can say my feminism kind of started from here. I found this poem and it was called Who’s Who. His name’s Benjamin [Zephaniah] – I can’t pronounce his last name, I’m sorry, Benjamin. It was a bit like this:

Were men, I used to think poets Were boring, Until I became one of them.”

Then, one day, I was at the homework class at the Aboriginal co-op in town. I was on the computer and an ad came up. You know, back in the day, early 2000s kind of vibe, the ads were really intense. You open up Bebo and it’s like, “Boom! Boom! Boom!” It’s where I mostly spent most of my time too, at the homework class.

Anyway, one ad that came up was a poem competition. I was like, “I know a great poem.” And so I typed into the box-

A few weeks later, or months, or however went along, I was living at my brother’s at the time. All this mail started turning up. 13-year-old in 2006, like, “Why are you getting all this mail, Tarneen?” My brother wanted to know what was going on. I opened up the letters, and it was a congratulations letter. Turned out I won the competition and I won a trip to LA.

Then, I gave the scamming a rest for a little while, until this year in 2018. But, little did I know that I was getting ready for my biggest scam yet. I honestly thought that I could’ve scammed my way into someone buying me a Chanel boomerang in 2018, but I’ve still got nine months, right? My PayPal is… Nah, I’m just joking. The Chanel boomerang is cute.

You know, black people are some of the poorest people in this country, but someone how I managed to convince the whole nation that I was “Gonna burn the cunt down.”

Somehow, I scammed this whole country into thinking I bought Shell, and I bought BP, and I was going to burn this country to the ground, but I honestly think that was my greatest scam yet because I got featured in The Herald Sun gossip section. Thank you.