Sometimes imagining a little murder is the only way Nayuka can get through the day.

Nayuka Gorrie is a Kurnai/Gunai, Gunditjmara, Wiradjuri and Yorta Yorta writer who’s been published by The Guardian Australia, NITV, Junkee, the Saturday Paper, the Lifted Brow, Kill Your Darlings and Archer Magazine. They were a Wheeler Centre Next Chapter recipient in 2018, and they’ve written for TV including Black Comedy, Get Krackin! and The Heights. 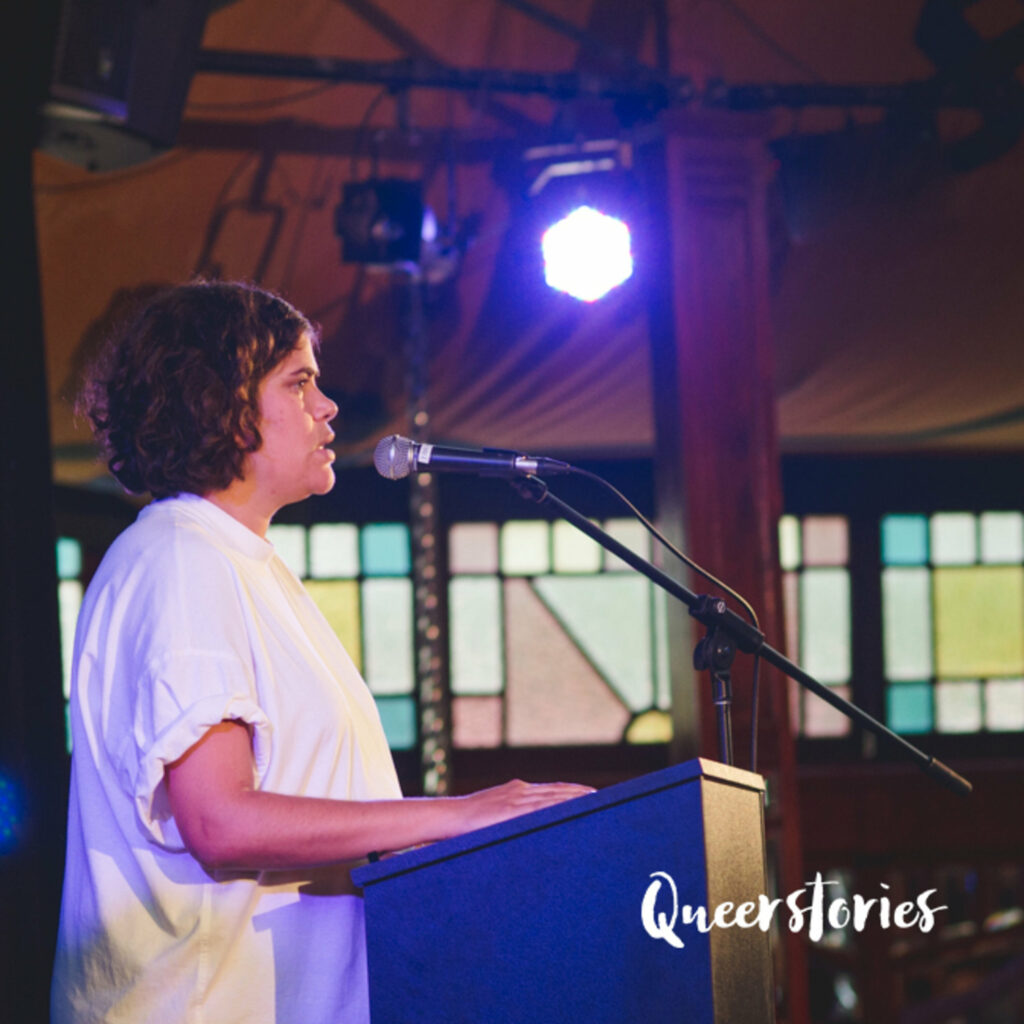 Sometimes, in a practice I like to call therapy, I imagine killing white people.

I was recently standing in line at the CERES cafe when an old white woman behind me nudged my back to move me forward. Half an hour later, an old white man pushed in front of me at the CERES community nursery. An hour after that, a middle-aged white woman and her daughter pushed in front me at the local veggie shop. Then, as I left that veggie shop, two more white people attempted to lock their bikes on to a pole outside the passenger door I was trying to get into. The bikes and their bodies rendered it impossible for me to get inside the car. They saw me but didn’t move.

In these moments I am invisible. I wonder if I had died that morning and had been inadvertently drifting through the world as a ghost, not yet aware of the fact that I am dead. I am the Schrödinger black: I exist when I am apparently in their way, I do not exist when they are in mine.

When I was in Year 10, my physical education teacher (who rumour had it in my year groped a Year 11 girl on the arse) during our lesson on first aid, he told the class that you are not legally required to perform first aid if you believe it’s a risk to yourself. My teacher recalled a time he saw an Aboriginal woman covered in blood who needed CPR and he talked about how he really had to weigh up whether or not she was worth saving: ‘You know, she could have had something infectious.’ It seemed really important that she was Aboriginal. It was not necessarily that she was bleeding, it was that her blood was black. I was 14, slipping further and further into my seat, my face turning red and hot, wondering what my peers would do if I was bloody and needed CPR. The teacher was probably more likely to grope me than help me.

Sometimes I wish to be invisible. I wish to not be seen by white people – when they are loud and drunk on the tram, on the street, men, cops, teenage retail staff asking to check my bag but none of the white people who went before me. Every time it’s pointed out to the white person as it happens – excuse me I was next, excuse me I need to get into the car, excuse me, excuse me I am a human, it is met with an apology and ‘I didn’t see you there.’ Every single one of them thinks it’s a mistake, but when it happens four times in two hours, I begin to wonder what is it about me and what the fuck is it about them?

Almost every time I cross the road, I’m convinced the white person driving is going to hit me accidentally because they have been conditioned to not register black bodies as human forms. I’m scared one day as I walk from one side of the street to another, a white person will accidentally keep driving, and it is not until my body is under their car between the first and second set of tyres that they will realise they have hit me. Maybe they will think it’s a dog.

But what happens when you force the white person to look at the black thing they don’t or can’t entirely register as human? I think the answer can often be found in our healthcare system.

In 2018, I moved to a town called Lismore. ‘Lesmore.’ Lismore is in the northern New South Wales area, and while it misses out on the bogan beach glamour of Byron Bay, it still manages to share the anti-vaxxer, hemp seed vibrations man. This combined with the white farmers whose ancestors probably dispossessed and murdered the Bundjalung owners of their land makes for a weird town.

One June morning, I woke with pains in my side and a fever. My partner Witt took me to the hospital. It didn’t take too long to be seen by the white staff there. They asked me the usual hospital questions: symptoms and pain levels. They took my temperature and blood pressure, both of which were high. They sent me back to the waiting room. Sitting in the waiting room was like sitting in a restaurant and watching everyone else get served before you. Initially you just brush it off; maybe they had to especially make your thing. (I’m vegan and might have coeliac, so that’s a thing that’s been happening a lot lately. Anyway, that’s not important right now.) You wrestle with whether or not you should say something. But it’s been hours, and you’ve seen two different rounds of people eat their entire meals including dessert, to eventually you realise it’s not all in your head. I was nauseous, feverish and crying in the waiting room while staff ignored me. An infected ghost. It wasn’t until my partner said something that the staff realised they had noted in the system I was meant to be given a bed immediately because I had an infection.

I was shuffled to a bed in my own room. I knew doctors would assume I had appendicitis because I was experiencing pain in my side as well as other infection symptoms. I wanted to save them time. On four separate occasions, I told the staff my appendix had already been removed 10 years earlier. I stayed overnight and my body was flooded with saline, Endone and antibiotics. I was discharged and given a referral to an ultrasound.

When I went to my ultrasound, the technician, an old white dude in his 40s, asked me to shift my clothing so that he could access the bare skin on my stomach and the top of my pubic area. I have not been this intimate with a man for a while – although not anymore, when I wrote this that was the case but so many people have been up there with the pregnancy now, anyway. He put cold gel on my skin and he moved the oval metal probe across my tummy. While he was doing this, he asked me where I was from. I told him I was black and I was from Melbourne.

He kept rubbing over the same spot with the probe, a cartographer mapping the same terrain over and over. Eventually, he gave up. I asked him what was up? He said he was looking for my appendix because the referral requested it. I told him, brah, I don’t have an appendix. He was confused but said while he was there, he could take a look at my kidneys if I wanted: ‘Aboriginal people have a lot of kidney problems. It’s not your fault, you can’t process grog properly.’

The ultrasound ended up revealing nothing, and I imagined choking him.