Nayuka’s in love…but then her worst nightmare comes true. 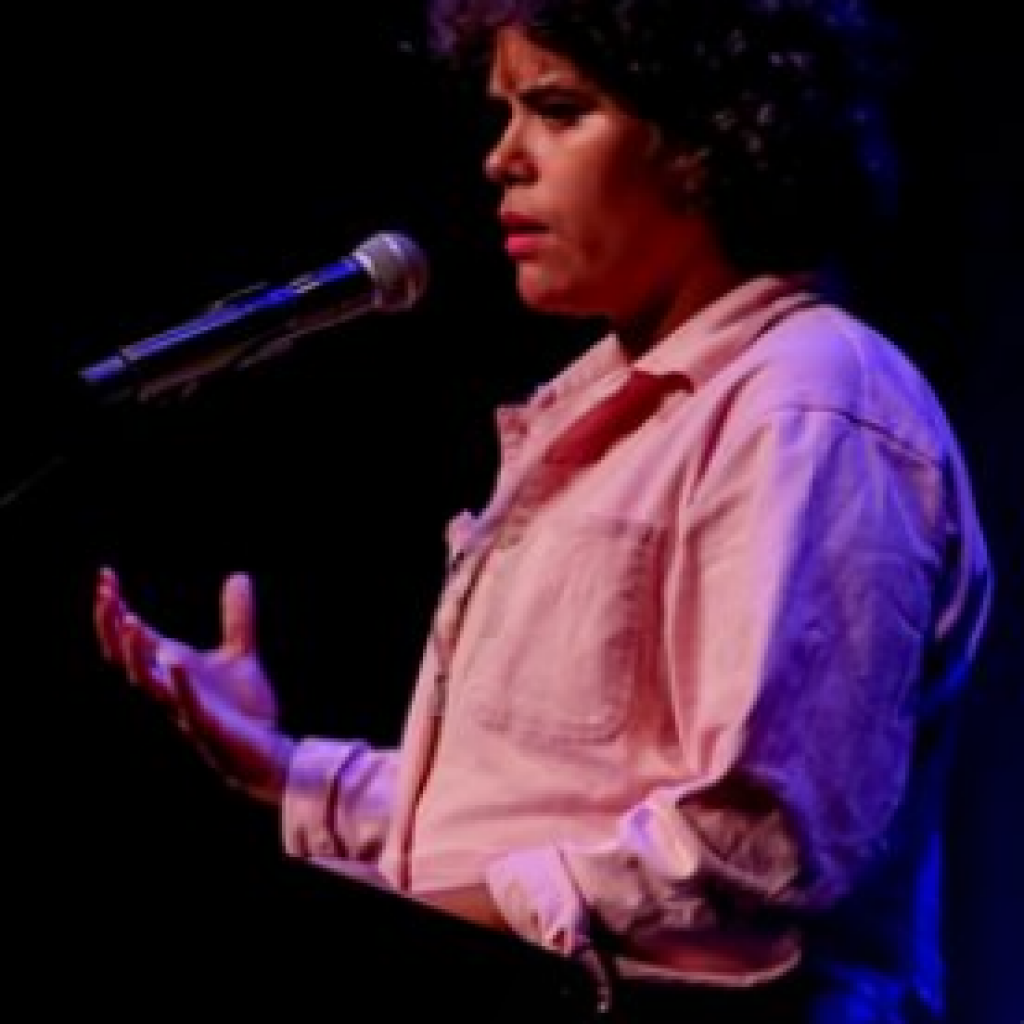 Hi. I’m Maeve Marsden and you’re listening to Queerstories – the podcast for the LGBTQIA storytelling night I host and program in Sydney and Melbourne. Nayuka Gorrie is a Kurnai/Gunai, Gunditjmara, Wiradjuri and Yorta Yorta freelance writer who has written for The Guardian, Junkee, VICE, SBS, and others and is currently working on the upcoming season of Black Comedy. This story will be published in the Queerstories book due for release in September 2018, and in the meantime, you should really follow Nayuka on Instagram where she posts very excellent photos of her with her partner Witt.

I’d like to acknowledge the traditional owners of the land that we’re on, and pay respects to elders past and present, and also give a shout out to love in the room. What’s up. For any of my Instagram followers, you probably know that I’m really in love and my heart’s really full, which is really good.

Women in my family don’t have that kind of love. That kind of swoony heart-eye, eyes-heart emoji. Sorry: Words. I’m a writer.

Anyway, Women in my life don’t… Black women don’t have that kind of love. They sort of just fuck some dude and at some point are just like, “Fuck it. You’ll do.” At some point, are just like, “Yeah, you know, just move in.” Blackfullas call this “married up” but I guess in our community we call it lesbianism. I jest. Yeah. I’ve got that kind of really cute gay love, and it makes me want to write terrible, terrible poetry,  and if I could draw I would sketch really tasteful nudes and subject my dinner guests to them, and force them to tell me how great it is. It’s really good love.

If you’d met me three years ago you’d probably think I’m a bit of a different person. I was in a relationship with a cis het man, a white dude, and at the time I was contemplating if I was asexual or maybe a lesbian. I am neither but the mind goes places. I hated PDA and straight couples really grossed me out even though I was in one.

But now I happily proclaim to thousands of strangers how hot my partner is and how they would make a great parent, and blah blah blah. You must be bored. I do know it’s boring but I think it’s good to talk about love because I think it’s resistance. We went through months of state-sanctioned hate and people telling us our relationships aren’t valid, and all of that bullshit, so if you are straight and in the audience, you can just shut up and deal with it for a little bit.

Anyway. So, story.  Last year, we went to Japan. It was really beautiful and as idyllic as a queer vegan holiday would be.

We drank a lot of beer and other weird Japanese shit. I don’t know… That’s not racist because I’m black.

We ate very well. Sidebar: I had one of the best days of my life there. We hired bikes in Kyoto and rode around, and got really drunk. They just looked perfect, and the weather was perfect. It was great. The trip though wasn’t all sunshine and rainbow flag emojis. On the trip, we had a kidnap scare, or adult-napping, or human thievery, or whatever it’s called. I just want to preface this story with another story. When I was young. Yeah, I kind of think the worst about everything. Anyway, when I was young, maybe four or five, I caught a bus with my Mum from Victoria to Queensland. Mum loves durries – loved them. She’s off now. Go, Mum. Mum got off the bus, it was a smoke break, and the bus left without her. I ended up pissing my pants and crying at the back of the bus, so I think that probably is where some attachment issues come from.

Anyway, she also used to be a cop and I just would think that she was going to die every day. I just assumed the worst. Anyway, I’m really anxious. Anyway. Witt and I caught…

Japan now. Witt and I caught a lot of trains there. I know it’s really hard to imagine if you’re from Brisbane, kind of like imagining a world without capitalism or a stable federal government, but-

… trains in Japan just make sense, right? They’re really quick, they’re frequent and they’re on time. So we’d catch trains, we’d get drunk and eat soba noodles and have other delicious Japanese snacks. The Japanese are really good at snacks.

Witt’s really daring and cheeky, which is normally a delightful quality. And because we’d been catching so many trains, we got a bit comfortable with it all. We thought we were really seasoned. When we’d be on the trains and having a few, we’d stop at the train station. The train would pull up. Quick, brief thing, whatever. Witt would be a bit tipsy and go get some more snacks or something, and then quickly run back on the train. All great fun. But I would panic every single time they left because of my forementioned fear of being left on transport.

I devised a plan and I told them our plan. You’ve always got to have a plan. If you take anything from this, it’s to have a plan. The plan was if, for whatever reason, the train did leave without them, we would just meet back at the departure point. We were leaving Hiroshima. We rocked up at the train station and saw a train, seemingly our train leaving for Osaka, waiting on the right track. There was about eleven minutes to spare, which was enough time at least to get some beer and snacks. Witt told me to wait.  I was on the train. I had everything. I had their wallet, their phone, their passport, and all of our luggage. They just had money in their pocket. About a minute after they left, the train doors closed and the train sped off. My worst nightmare was realised. And the most tragic thing to happen in Hiroshima happened. No: That’s a joke.

As the train was moving, I started to quietly say, “No.” Just rejecting the reality. Like, “No, no, no, no, no, no, no, no.” Eventually, I was like, “No! No! No!” And then crying. The Japanese are just so polite, they all just ignored me.

As per the plan, I got off at the next station and got the first train back to Hiroshima. I tried not to freak out too much because I thought there was still a good chance they were there. When I got back to Hiroshima, they were not there. Initially, I thought perhaps we were at different parts of the train station so I started to look everywhere, lugging all of the shit around. You hear those stories about mums who lift cars and stuff when they’re in a panic trying to save their children, and I totally get that now.

I was looking around. I thought maybe they did the same thing, and so that they’d gotten on the train and then they’d come back to Hiroshima, and that they were going to look for me as well. They simply weren’t there though. I waited until the last train, so it’s maybe 10:00, maybe 11:00. -I don’t know, it was late. I just couldn’t find them. I was sobbing. I must have looked weird. I tried to speak to this train station staff but they kept looking at me like I was some weird parasite.

This is when my mind truly started going places. In all of my hysteria, there was one place I avoided – the police. Witt, my partner, is an abolitionist and even if they did run into any problems, rightly so, the police are the last people they would be inclined to go to for assistance. Side note: I had three separate dealings with police in Japan. It’s truly comforting to know that it doesn’t matter where you are in the world, if you are black, you will be overpoliced: a nice little slice of home.

I circled around the police station. I resisted the urge to go in until I just couldn’t resist it anymore. I went in and I started crying, saying my boyfriend was missing. At this point, I thought maybe Witt had been kidnapped by some weird Japanese sex slave cartel. I imagined myself as some kind of hotter, younger and blacker Liam Neeson in the film Taken, starring Liam Neeson.

I wondered, would I have to stay in Japan until I found my boyfriend? Would I have to post Missing posters? “Missing: Hot White Twink, last seen in Hiroshima.” The police asked me all these questions. I felt really guilty because what if they spoke to the police at Osaka and then the police just grabbed Witt. And how would Witt react? Police as a principle don’t like queers. What if they got arrested? Would I have to sue the police? How do I take the Japanese police to court? What had I done?

So, here I was stressing, thinking I had either lost them to a cartel or the police, which is pretty much the same thing I guess. I was not a hot, young black Liam Neeson. I was a little baby who would never see her boyfriend again and would die in Hiroshima mistaking every hot twink for her boyfriend. Would I settle down and find a Japanese partner? Would they support my quest to find my boyfriend? How much would it cost to photocopy pictures of Witt? What hashtag would I use to start the movement to find Witt? What photo would I use?

I called my brother, sobbing. I don’t even know what time it was. He sounded like he was sleeping but that’s just his phone voice. He told me, he was like, “Dude, everything’s going to be okay.” The police were useless to be completely honest. They laughed at me when they realised… They kept saying, “Why don’t you just call your boyfriend?” I was like, “I’ve got their phone.” They laughed at me, which is fair enough.

I was just like, “I get that, cops. That’s why I’m here in this rundown police station at the train station, and I’m not already sexting them right now. Obviously, they haven’t got their phone. Just do your job.” I waited at the station while the police did their thing. I waited, and I waited, and I waited until miraculously Witt came online. They were alive.

I messaged them. They had gotten the train to Osaka and thought I would just meet them there, which does actually make a lot of sense if you really thing about it.

I ended up staying at a cheap hotel and caught the first train out of Hiroshima. When I saw them at Osaka station I squeezed them so hard and cried with relief. Hold your twinks close tonight, guys. Thank you.