It takes Fran nearly a lifetime to work out why the slurs thrown at her in the schoolyard never quite sound right.

Fran Mulcahy is an Ipswich based performer who is aging disgracefully, a spoken word performer, feminist writer and poet. Her first stage work was at age 10 when she performed the angel Gabrielle in the school pageant. Before retiring she had a career as a doctor, and she is currently involved in educating health professionals and medical students about the gender diverse community. She’s soon to be touring a new one woman show, so be sure to look her up. 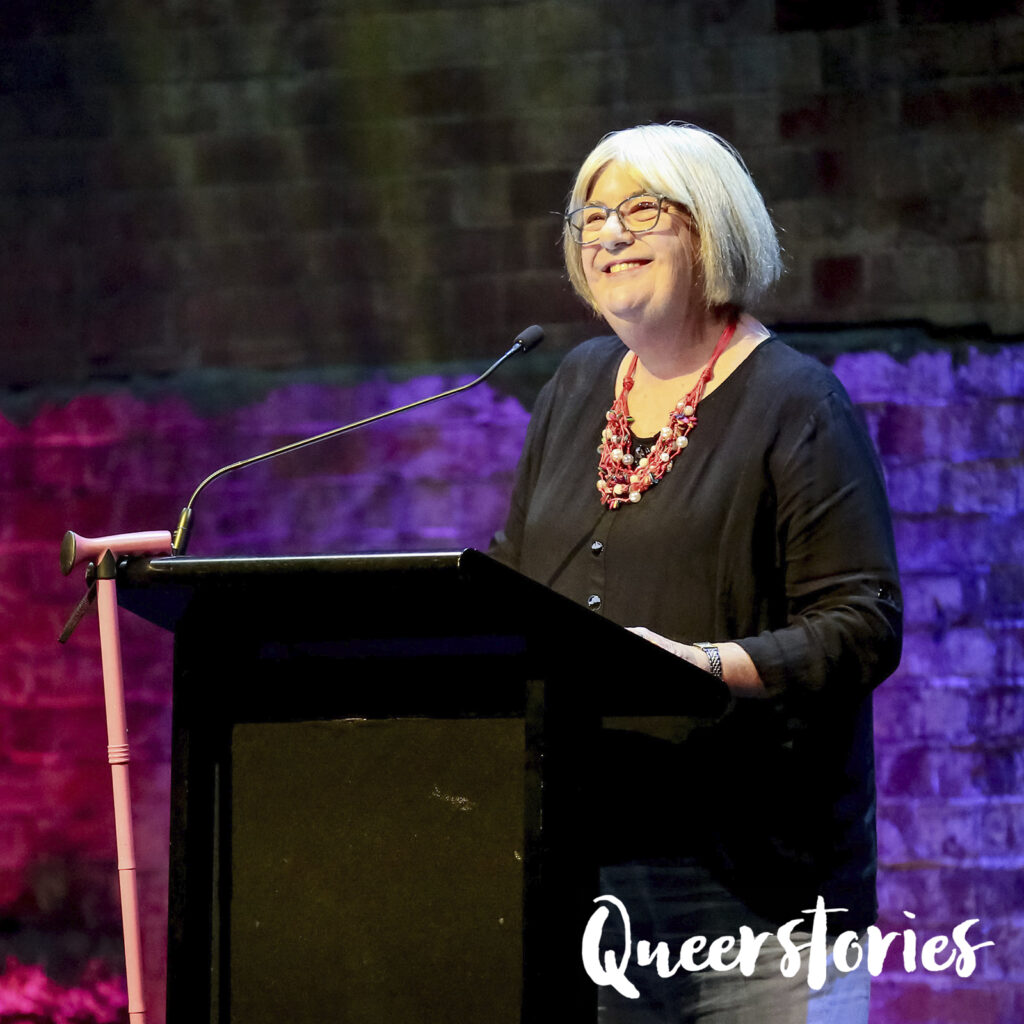 Fran: My father, (Pa) grew up in Tasi. He was a physically imposing man, big, powerful and a sprinter. He had played Aussi rules football at the state representative level. My mother was a gentle intelligent soul. Both my parents were from big catholic families of Irish extraction. Between them they had 11 siblings and a council bus full of nieces and nephews. They did not succeed in doing their Catholic duty ( no homemade babies)  so after a time they adopted two children, Pa got his wish; what he called a “pigeon pair- boy first”. I was the elder to my sister. It was open knowledge in the extended family that I was adopted and while that was sometimes not comfortable it did seem to make room for some of my behavior. I preferred the company of my older female cousins. I was bright articulate and reading well above my age and loved putting on plays and doing dress-ups and playing dolls.  When I was pushed to play outside with the boys, that was ok, if second preference. My male cousins titled me a sissy, it was usually a fairly soft slur, my female cousins would tell them “don’t be mean to him” and would say to me; “it is ok to like girl things”.

Our family moved north to Queensland when I was 6. Around 10 I was introduced to rugby union at my Christian Brother’s school. Pa was not interested. He called it “cross country wrestling” and paid no attention to my attempts at the game. I was disappointingly small and genteel and not very good at it.  But at least he could be proud of his adopted son’s academic results. Mum supported and encouraged my less masculine interests and for two wonderful years I enjoyed drama, art of speech and elocution, dance and piano. I was becoming a well-rounded sissy. When my maths results dropped to 95% Pa stopped all my extracurricular activities except for piano. (Mum dug her toes in for piano) His son might not be a sporting behemoth but none of this sissy stuff was going to derail his academic success.

I have a very precious memory from that time. Sitting at the piano for lessons and the teacher said my nails were clacking on the keys, I should cut them or else people would think I had long nails like a girl. I remember thinking, but I want to be like the other girls. And then followed by, ‘NO Pa chose a boy’.

It was 1966 the cis-hetero-normative world was absolute, doubly so if your heritage was Catholic. Gay men had not been invented yet; – let alone gender diverse folk.

I had no social currency in the tribal hierarchy of an all-male high school. I was subject to the occasional “lets bash the sissy homosexual,” though that may not have been the exact language used, that was the gist. I understood that my interests were “sissy” but needed to ask my mother what a homosexual was. Interesting! Apparently they had been invented around 1970. The bullies were wrong. As the Goddess Katy Perry said, “I kissed a girl and I liked it”. Sissy, yes. Homosexual, not exactly?

At 15 of years of age I had very much enjoyed sharing a kiss with the slightly younger next-door neighbor Katrina, Katy. She was very pretty, very French, very blonde, with a smile full of braces. Her family was very strict Catholic and quite new to Australia. She smelt of fresh flowers. Our socializing was limited to our homes and school outings that included her older sister. Immersion into Katy’s home life resulted in very quick improvement to my schoolboy French and I could readily follow dinner table conversation. My verbal French still left a little to be desired, however. One night I spent time explaining that my dog knew the names of several toys and would fetch them on command. What the listeners heard with their Toulouse regional ears was an impossible story about intelligent dog shit.

Katy’s family was rugby mad.  She loved coming to weekend football and she was excited and voluble on the sidelines, cheering on my efforts, such as they were. She delighted in hanging off my arm in her relaxed flamboyant European manner. Katy’s English while good had limits and a heavy gorgeous accent. She was delightfully wicked. When the jocks tried to chat her up she would turn to me and break into rapid French. I replied in hideous french. Apparently Speaking nerd  / sissy French got a blonde on my arm. So I ascended the social ladder one rung from the bottom.

Katy did not see me as sissy at all. I played football, I held my head up when I spoke to her father and I enjoyed the arts. Her view was that I was a surprisingly French young man.

The ultimate lived experience of schoolboy social hierarchy was the school formal. The cool kids had girlfriends who would be attending. Katy was not allowed to attend a dance and since I not met any other girls who thought of me as anything other than sissy, it looked like a fraught endeavor.

In anticipation of the formal we had several Friday afternoon’s dance practice. Seniors from a local convent school arrived and we were all allowed a combination of miseries.

1; Those boys with girlfriends and confidence monopolized the socially confident girls. So for the cellar dwellers there was absolutly no chance to actually find a partner.

2; We all got to dance like white boys. I was not game enough or silly enough to waltz or do some jazz ballet.

3: And most memorable, the combined aroma of Brut 33 by Faberge, Poison by Dior, raging adolescent hormones and the poor hygiene of teenage boys was its own form of hell.

So, I sat to side of the hall, I was the shortest.  A group of apparently reluctant girls sat on the opposite sideline. Eventually, I took the bold step of talking to the sideline girls and was quickly smitten with Henri. (with an”I”) She was not that much taller than me, bespectacled, curvaceous. and very, very, bright. I can’t remember ever dancing at practice, but we talked and talked. Rossini to Lightfoot, Dostoevsky to Orwell, Nureyev to Tharp, light waves to photons. She smelt like the cool breeze that follows a thunderstorm on a fetid day.

At the last practice I invited her to be my partner for the school formal and she went a delightfully damask rose pink and said yes. We arranged to meet after school and sort the details. I was waiting and her friend Mary appeared looking stern and said Henri would not be going to the dance after all.

She explained Henri was a lesbian. I had to ask what that was-  oh dear. And Mary went on to say; I should not take it too hard as Henri never ever talked to boys. When her similarly inclined school mates, including Mary, asked why she’d spoken to me her answer was :

“If he was not a boy, he would make a great lesbian”.

Really should have taken the hint.

It took almost  50 years for me to properly understand that I am not a sissy boy.

Not a French boy ,

not any kind of boy.
and Henri would be pleased to know that I have been married for 2 and ½ years and my wife thinks I am a pretty good lesbian.