Jordan reflects on the bond between child – ‘Apo’ – and Grandmother – ‘Lola’ – during an ugly chapter of Australian history.

Jordan Shea is a Filipino-Australia writer for stage and screen, and a teacher. He was one of the Philip Parsons Playwright’s fellows of 2020, and his work has been developed by major theatre companies and independent collectives. Jordan’s work focuses on exploring narratives of Filipino-Australians, their hopes, dreams and nightmares. His work strives to interrogate our national landscape, and why we are here and how we can change where we are going. 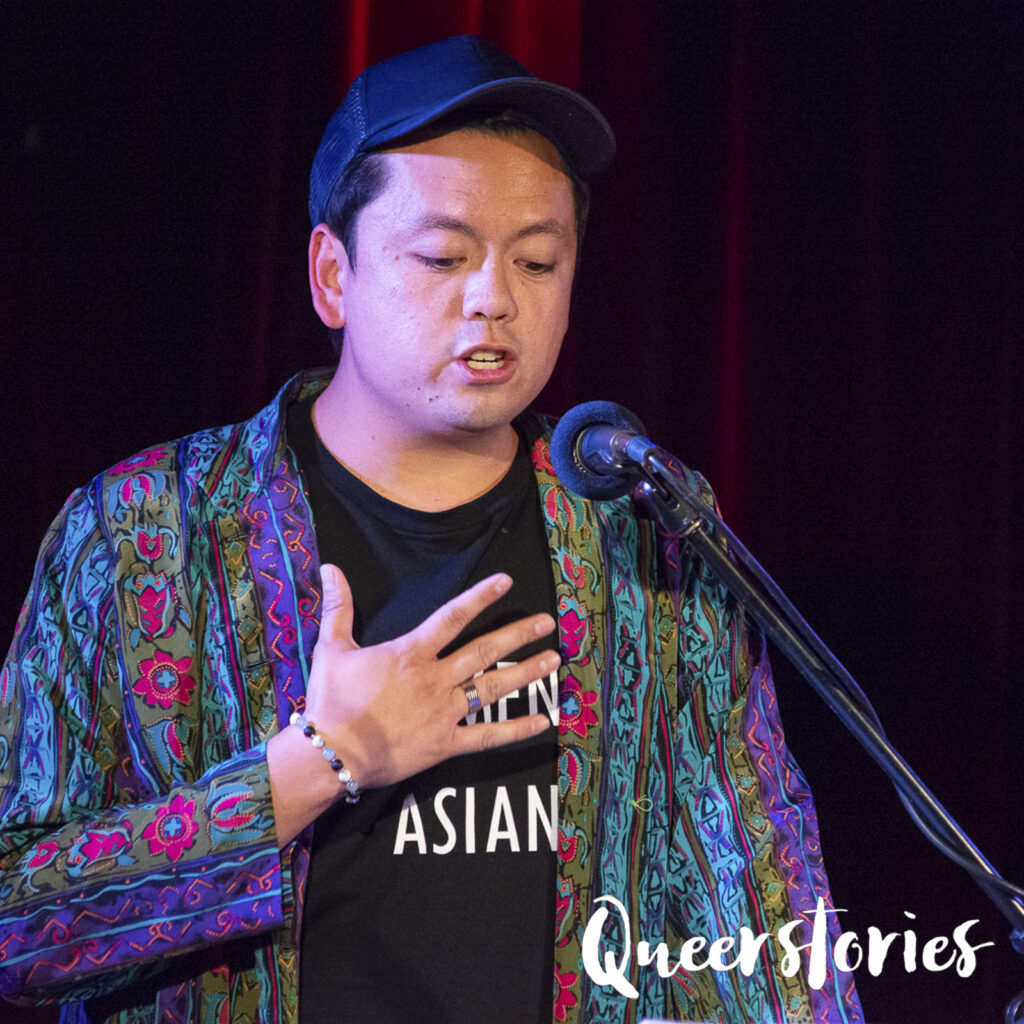 Hi I’m Maeve Marsden and you’re listening to Queerstories. This week, Jordan Shea is a Filipino-Australia writer for stage and screen, and a teacher. He was one of the Philip Parsons Playwright’s fellows of 2020, and his work has been developed by major theatre companies and independent collectives. Jordan’s work focuses on exploring narratives of Filipino-Australians, their hopes, dreams and nightmares. His work strives to interrogate our national landscape, and why we are here and how we can change where we are going.

I was lucky enough to be in the Belvoir writers lab with Jordan and I loved reading his work and learning about his craft. We also bonded over being performative queers, obvs. His next play, Ate Lovia, is coming up at The Old Fitz. Buy tickets at redlineproductions.com.au

Jordan: I grew up in the Sutherland Shire.

If you weren’t any good at sport, surf or racism – you weren’t good at much in the clear blue eyes of the suffocatingly dense White population.

The Shire, is on Tharawal land, but the celebration of Captain James Cook would make anyone forget that. He is everywhere. Council chambers, library, the beach, hell – they’d probably put him on their money if they had the chance.

Being Asian in the Shire was a bizarre concept. There were three Asians in my primary school. Alan Goode, Daniel Lee and myself, Jordan Shea. The most Anglo names any of us could get given. On paper, you’d think the whole school was Whiter than the royal family.

Being queer and Asian in the Shire – well.

How could a kid like me fit in, in his foul Green soccer uniform, re-watching The Beauty School drop out number from Grease about forty times before being conscripted to soccer training on a Tuesday night.

There had to be someone, something, that made it feel okay to be totally different.

Even the other Asian boys at school started making heinous jokes about SARS, remember SARS? Covid’s ugly old twin sister. And they even spoke in accents and all that.

As I got older, I realised we were conditioning, assimilating, striving to fit in to a world we were entirely foreign in. Hectic.

But there was still a part of me that felt entirely wrong to celebrate my Filipino culture. A part that staunchly tried to protect it from getting out amongst the plethora of alabaster faces in the suburb and at school.

My Grandmother, or ‘Lola’, the Filipino-Tagalog term for older female family member, be an Aunty or Grandmother, was born in nineteen thirty.

She lived for some ninety-one years later, and in my childhood, she was no featured extra, but a star. Oral storytelling is vital in our culture, it makes us up, our histories, our futures, ourselves. Often, on a train from Blacktown via Central then back to Caringbah, she would recount a graphic invasion by forces in her hometown of Vigan.

She would talk of the way her, her mother and her sisters would go up to caves, rub dirt on their faces and hide to avoid the totally and utterly unfathomable. Looking back, I remember she was triggered by what she called ‘other rice’ – not Filipino rice. Rice that was plain, unflavoured by garlic.

She was by no means a warm Grandmother. I’d hear about warm Grandmother’s. ‘Nan’. ‘Nanna’. My Caucasian mates would go to their places for the weekend, overnight or in the school holidays. They would feast on Happy Meals, watch movies rented from Video-EZY and could get away with murder.

Lola and I stole grapes from Coles, watched the Young and the Restless and if I so much as talked back to her she could cast a Typhoon over my childhood in a heartbeat. But I loved it.

My childhood with her was scanning the back of receipts for a grossly discounted KFC feed, or waiting for her at the RSL while she had a slap on the pokies – ‘pindot’.

And her style, oh boy, her style.

Everyone’s Grandmother’s would pick them up from school in some kind of garish tracksuit, some kind of blouse purchased off the rack from Westfield, with the same greyish hair.

Mine would pick me up, tight black sweater, crisp black suit pants, and sunglasses that made her resemble a blowfly. No matter the temperature, no matter the rainfall, that’s what she’d pick me up in.

And don’t even think about affection, oh no. Don’t. She had a habit of slapping me on the back, joyfully, no matter what the occasion. That’s what she did until the very end.

There was part of me that was a touch embarrassed by her when she picked me up. I begged her to wear some colour. On Sunday’s, she’d put something on to please God. He got all the good colours, the pick-up line at my school got my Grandmother looking like she was in mourning.

Embarrassment did seep in, and my cultural pride was turned down to a very gentle simmer. I never expressed it outwards, but I did my best to ignore her, to forget about her. She picked up on this, and just kept hanging around.

Tharawal land, the Shire, is famous for something that everyone can try and get into – the Beach.

Cronulla Beach, in particular, is huge.

Leading up to that day, I remember sitting in my Dad’s Toyota, listening to caller upon caller ringing into Alan Jones, to voice their absolute hatred for ‘the other’. It was terrifying. A mixed race kid, at twelve, I wasn’t looking for a definition of racism, but I found it all around me.

I remember hearing Jones read out text messages he got a hold of, rallying white supremacy. His actions hurled a molotov cocktail of bigotry into an already horrid situation brewing at the beach.

I had finished Year Seven a day before the riots. Then, that morning, I was instructed to go with my Lola to Cronulla. Groceries, I think it was for. This was sixteen years ago, before any kind of immediate broadcast of what was going down there. I didn’t have a mobile, nor did she, so there was no stopping us.

We didn’t speak much that day. I was too busy glued to my game boy or whatever, and she We got on the train. We lived two stops from Cronulla, and the journey was always ever-so quick. The heat, I remember, was palpable.

When my Lola turned up, I recall her face looking different. She looked more stoic. She looked as if she’d seen some shit. Or maybe, it was the fact, that almost sixty-four years earlier to the day, she had watched ships invade her home.

We took the train.

These days, I see hundreds of thousands of people at rallies for different causes. It’s breathtaking. What is beautiful about these sights is that more often than not, the bodies there are diverse. The crowds are made up of the fabric of this stolen country.

When I looked out the window, I saw an ocean of hatred. Cases of beer resting on their shoulders, not an ethnic person to be seen. They were a hungry mob, filled to the brim, and primed to take us on.

The train pulled in, and the doors opened. The anxiety in me grew, and I still get the same anxiety in mass crowds today. I looked at my Lola. She looked at me. The blowfly sunglasses concealing her darting eyes. This seventy-five-year-old woman knew we were both in significant danger if we were to go anywhere near the mob that grew bigger and bigger.

Cronulla has one platform. One train goes in, one goes out.

She walked off the train, easily. I watched her go around the crowd. The doors closed, and the train took off.

About an hour later, two young men were brutally set upon and attacked by the mob, on the same train we were on.

We never talked about what we saw. In fact, a lot of my family didn’t know she saw what she saw. When I was interviewed by a newspaper for one of my plays, I spoke about the experience for the first time. I spoke about how lucky we were. To this day, I still think it could have gone so horribly wrong.

Things changed between us because of that day. We became a small part of history, and she became a bigger part of my life.

I was no longer embarrassed of her, or my culture, and in fact, it informs all parts of my identity and my practice.

When she died, three weeks ago, part of me did as well. But part of me also knows, fully well, that the shared experience we had, as Lola and Apo, Grandmother and Grandson, formed us both.

What binds us and our elders together is experience.

And in a way that I try to understand every day, I’m glad I share this with her.