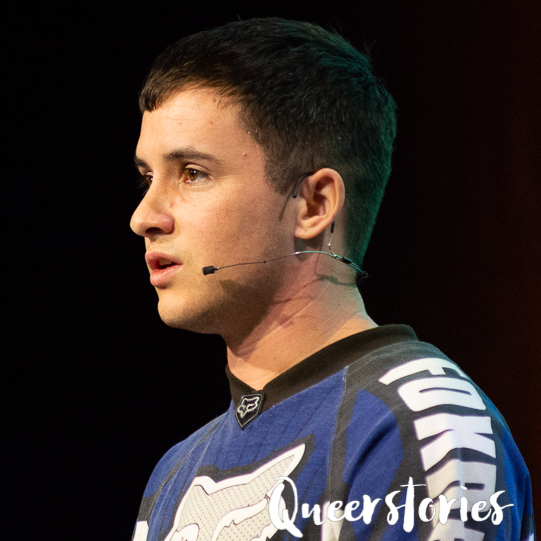 Vincent Silk is an Australian writer. His fiction and non-fiction has been published in Archer magazine, Going Down Swinging, and un magazine. He was a 2016 writer in residence at Next Wave Festival and Firstdraft. His first novel, Sisters of No Mercy, is an adventure in hysterical realism looking at the impacts of global climate catastrophe on urban life. This story was performed at Queerstories for Sydney Writers Festival.

Last October, I was turning 29. I had taken two weeks off work and I’d planned it really carefully. I would go to Camp Out, the annual five-day camp run by a group of Sydney volunteers for LGBTIQA+ teenagers and their allies. I would cook in the kitchen like I have the last three years. I will go back to Sydney for the launch of my book and my cousin’s wedding. Then I’d fly back to Melbourne and go back to work.

I had almost forgotten that this two-week period was to include my birthday. I had been swept along in this tide of small but dramatic experiences. The drama of reversing a van with a trailer attached down a muddy dirt road. Meal-time dramas, such as forgetting to buy oats; an essential ingredient for the night we’d planned to make apple crumble. The drama of my ailing body. I had a bad strain to my left knee and had to take breaks from cooking to ice and elevate it. The dramatically stimulating experience of cooking meals for eighty people, including some young people who were staying away from home for the first time in their lives.

Four of us kitchen crew were sharing a bedroom across the creek from the main campground. There were two bunk beds and a mattress on the floor; my bed. It was almost midnight, the night before my birthday, and one of my co-cooks and I were alone. Our two bunkmates were back at camp, making sure that the young people were all in bed; a task which could take hours.

My friend and I had just been debriefing our day in our usual way, by screaming excitedly at each other, too over-stimulated to speak with inside voices.

We were also doing a sped-up version of cementing a friendship, downloading five years into five days, so we didn’t have time to speak slowly and quietly. It was part of being in the environment where you never get a moment to yourself, even if you want one. The urge to merge, I guess. I reached for my phone to set my alarm for 6 AM. I was rostered to do breakfast the next day. I’d planned to have the afternoon off so I could go for a birthday swim or maybe put some birthday ice on my fucked-up knee.

Looking at my phone, I saw I had two missed calls from my partner, which was odd. We’re more of a texting couple because of our generation.

I texted to say I was going to bed, talk tomorrow, assuming this was some kind of birthday call. She replied immediately. Could I call her now? I did, anxious, that sinking feeling in my chest that I always get when someone I love asks that I call them urgently, that dread that somebody has died. The call was what I had feared. Our dear friend Lachie had killed himself. It wasn’t a long conversation. My partner was going over to a friend’s house where a group of his friends were gathering, but she wanted me to know as soon as possible, and to find out from her.

I was about to go to sleep. There wasn’t anything else to it. We said, “I love you,” before hanging up, and I lay in the darkness in that damp bunk room, twelve hundred kilometres away from her, feeling into the void that is left when somebody that you love leaves this world. I did sleep, through sheer willpower maybe. The next morning passed strangely. I told my Camp Out friends what had happened. Some of them knew Lachie, but most of them didn’t. He was from a different city, a new part of my life, distinct from my Sydney friendships, and it felt like a weird response to “Happy Birthday”, but that was just the situation.

I just cried all morning, weeping into the vegetables. I’m a seasoned veteran of crying in public. I’ve cried in Priceline when the cashier asked me if I was going to go the “whole way” with my transition. I cry on the cross-trainer at the gym. I cry at work, just weeping quietly behind my computer. I’m not going to take the day off because I’m crying. I have shit to do.

And I do not process pain by removing myself from other people. This life is really full-on. We need to be in it together, and that’s how I felt that day. Losing someone you love is never anything less than unbearable, and I can’t take a day off from that. So I said, “If you can’t handle crying, you better look away.”

At one point, the kitchen was becoming blurry and I was holding a sharp knife. For health and safety reasons, I went outside with a co-cook and cried in her arms behind the building, listening to the sounds of the young people reading out Gems – the little diamond-shaped cards that serve as a postage system for compliments within Camp Out.

Being in a space where adults and young people are making connections, forming these community-focused bonds is always intense. To be in that with fresh and sharp grief over somebody who had to leave this world because it was too painful to be in it is like nothing else. That night I sat with an ice pack wrapped around my knee while a mess hall full of queer young people and adults sang me Happy Birthday. I felt… I don’t know how I felt.

A few years ago, I had a hot desk at a studio where I would go and write. I took my friend Lachie there, and we sat and wrote together, me stubbornly working on something I never thought that I’d finish, him alternately staring out the window and writing short stories about a city where plants have taken over the buildings. The story was narrated by the plants. I used to fix his homework for him because he couldn’t cut it back to meet the word count. His essays were these endless, incredible cyclical things, just nonsense with stabbing moments of lucidity. One line read, “The fluff inside my pillow is just fluff.”

I gave Lachie a spare key to the studio so he could meet me there. Once, I went over to his house and I saw that he’d hung the key on a nail on his wall, and not near the door so he wouldn’t forget it – just below where the wall met the ceiling, out of reach. “You can’t get it there,” I said to him, “it’s too high.”

I told him once that when writing, fear of being seen leads me to work things over and over until they’re flat and evasive until no reader could discern what I am really saying. I told him I was afraid of finishing anything, afraid of what it would mean to be read by other people. Lachie, who put the key so high on the wall that he couldn’t get it down, said to me, “No fear. Drive away fear.”

The night of my book launch in Sydney, I left while people were still milling around. My partner and I went to the airport. We had to get back to Melbourne for the next day. We had a funeral to attend.

When I sat down to write this a few weeks ago, it was Lachie’s 30th birthday. He’d been gone for six months. That night, I sat on the beach at Phillip Island with my partner and our friend; both of them who had loved Lachie and been loved by him. We were talking about what he’d be doing if he was there. He probably would be frantically paddling away on a stolen kayak, or maybe collecting shells and twigs, walking lightly on the balls of his feet like he always did, as though he was about to float away.

I had thought that writing, especially fiction, was a kind of solitary practice. You sit at a desk making stuff up, trying to make it make sense. Releasing my novel, Sisters of No Mercy, shattered this notion. People who knew him read that book and told me how much of Lachie there was in it. I only hope that I can continue to drive away fear. Thank you.