Teddy Dunn: A History of Suits 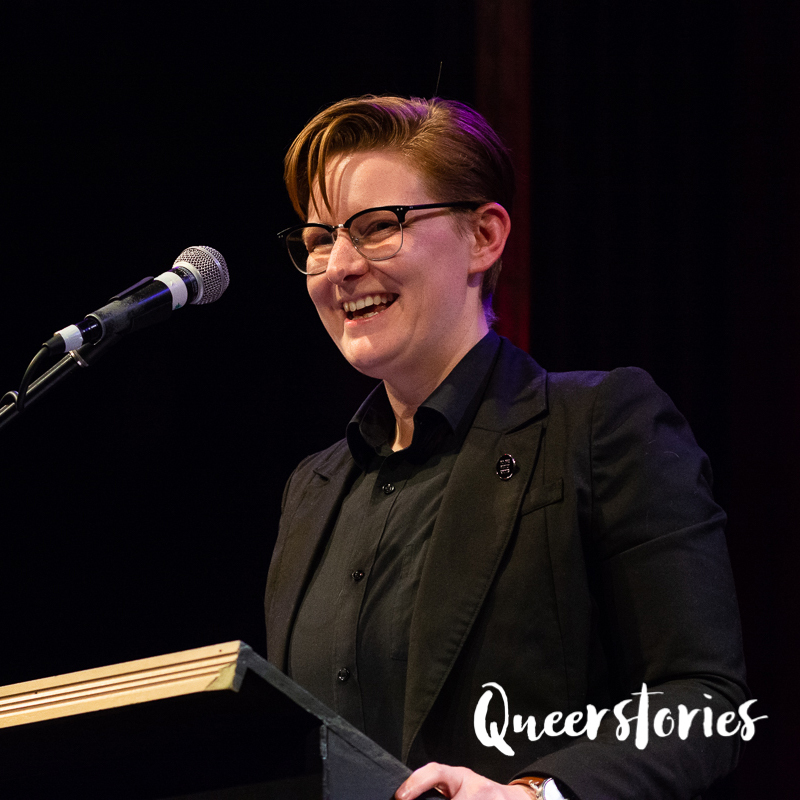 Hi there. I’m Maeve Marsden and you’re listening to Queerstories – the podcast for the LGBTQI+ storytelling night I host and programme around Australia. If you’re listening for the first time, make sure you check out the back catalogue of episodes. There are, to put it mildly, shit tonnes of good stories for you to sink your teeth into, or your ears. Do you sink your ears? I don’t know. That doesn’t make sense. But there is also a Queerstories book that you really should buy, and a podcast collaboration with Google’s Creative Lab called My Mother’s Kitchen. It features a bunch of Queerstories storytellers and is a cool interactive game “slash” podcast “slash”… I don’t know, experimental audio experience. It’s cool and you should check it out at mymotherskitchen.com.au.

Teddy Dunn is an independent director, theatre-maker and dramaturg who graduated from Flinders Drama Centre in 2015 with First Class Honours and a University Medal. Since graduation, Teddy has directed four debuts of new Australian plays, and as an actor, Teddy has worked with State Theatre Company, the ABC, ActNow Theatre, Patch Theatre Company and Vitalstatistix. He was a participant in the 2015 Director’s Studio at Playwriting Australia, and in 2016 he won the Bendigo Bank Award with the Helpmann Academy. Teddy first performed this story at Adelaide Writers Week in March 2019, then again in Sydney and Melbourne in June.

The first suit I ever wore was painted onto a cardboard egg. I was playing Humpty Dumpty at the time with only my legs visible, sitting on a drama block and then falling backward onto a gym mat on the cue of “fall”.

Whilst Humpty Dumpty’s fate was a tragedy, I believe the most heart-wrenching element of this performance was that I wasn’t given any eye holes…

… and therefore never saw myself as an egg.

My first experience wearing a fabric suit was on a runway when I was six. My aunt has always been a member of various clubs for middle-aged women, and one afternoon they had a fashion show for children. My sister Rose and I, both happening to be children at the time…

… were brought to a multipurpose room. A makeshift dressing room was assembled from pin-up boards, and inside was a rack of clothes. Hanging near the back was a red suit with a fine white line running through the fabric. Its beauty pierced my heart in a way that hadn’t happened with any other piece of clothing, except for my Peter Coombe t-shirt, which shouldn’t count really, because anyone would want that t-shirt. I asked to wear the suit, and some ladies exchanged glances but they allowed me to try it on. It fit me perfectly, which everyone could tell immediately since I’d been watched carefully by several women who seemed suspicious but also like they were sewers and new a good fit when they saw one.

I wore it with a white shirt with the top two buttons undone and walked down the drama block runway in my black patent leather shoes like a prince. My mum couldn’t afford to buy the suit but we were permitted to keep one item as a kind of payment, and so I kept the jacket. I cried later, knowing that the suit was broken up and incomplete… and that some boy would have my trousers.

Like most of my crying as a child, it was secret. Tears were running into my ears, hot and quiet. My family don’t remember any of this, but I have photographic evidence that I owned that jacket because I wore it to Bethany Newman’s birthday party.

My dad loves genealogy. He told me that one of our ancestors was a knight, like a knight in shining armour. I was in my twenties when I heard this, but I felt myself shift into a little child, imagining myself sitting astride a white stallion, resplendent in gleaming silver, lance at the ready. It made sense that it was in my genes, to wear a suit made of armour.

A mid-blue 1970s suit, paired with a bright orange tie and cherry-red Doc Martens, was my formal outfit. Nobody was out as queer at Unley High in 2005, and when I subsequently came out as a lesbian in Health class, Natalie Everinadis asked if me being a lesbian was why I wore a suit to formal. I had a deep sense that it wasn’t why, but that may be the reasons were similarly transgressive.

I said no but gave no further explanation because I didn’t have one. I spent $79 on the suit, $10 on the tie, and then with the remaining $11 I bought a share in a bottle of Bacardi with two Emilys.

I didn’t end up getting very much of that Bacardi because I had smoked a joint and spent most of the evening sitting under a tree and waiting for people to visit me.

I felt I couldn’t walk, and that may have been because I had used duct tape to bind my chest and stomach. I didn’t call it binding, I just wanted to fit into the suit, and the fact that I had bought a suit that would fit me only if I didn’t have breasts hadn’t occurred to me.

My mum wanted me to be able to have my hair and makeup done professionally, and so she took me to her hairdresser, Suzie. Suzie was, still is, probably, a tiny, coked-up, Italian woman who was once so speedy that she cut the webbing of her finger when cutting my hair and bled all over my ear.

She gave me an up-do and applied foundation like it was sunscreen. It was so dark against my milk-white skin that I seriously considered removing it, but my mum convinced me that it was better than nothing. She was wrong to convince me of that. I was a monstrous aggregate, with the head of a tubby beauty queen applicant who moonlit as a rhythmic gymnast, the body of a tubby teenage boy attending his formal in 1974, and Riot Grrrl feet.

I had gone stag, so in all my photos I was sandwiched between four of my friends – all in peach or teal dresses – in poses that would look right if I had been wearing a dress. I couldn’t explain why, but I felt deeply humiliated.

After the afterparty, I stayed with about six other people at Victoria D’Cruz’s overnight and left that suit hanging in her closet. And I never saw it again.

I own a suit now.

It was made in 1937 for an esquire. His name is printed on a little fabric tag on the inside of the waistcoat, typed on a typewriter.  While the pants and waistcoat fit me well, the jacket never has. I could never tell exactly why. Is it too boxy because my shoulders aren’t broad enough, or because my hips kick the base of the jacket out further than they should? The sleeves are the right length but are my arms too skinny, maybe, or not skinny enough at the top?

What kind of body did the esquire have? And why did I fit some parts of the suit and not others? As I was writing this I realised it’s likely he didn’t have breasts. Regardless, I wear the two pieces that do fit me whenever I want to feel either, A: As though I’ve made an effort, or B: Proud of myself.  I’m not sure what I’ll do if I’m ever proud of myself in winter and can’t justify being jacketless. Hasn’t happened so far.

I really haven’t spent a lot of time in my birthday suit. For some time, I didn’t even make love in it. It’s always been an ill-fitting thing; bunched in places, too tight and stretched in others, uncomfortable to move in.  Nothing I have done to change myself – and I have done much – has made it comfortable. For some time, I thought about throwing it away, but it was a gift from my Mum, and I’ve grown attached to it. So, I’m getting it tailored.