Paul Kidd: How I Got Laid at my Boyfriend’s Funeral 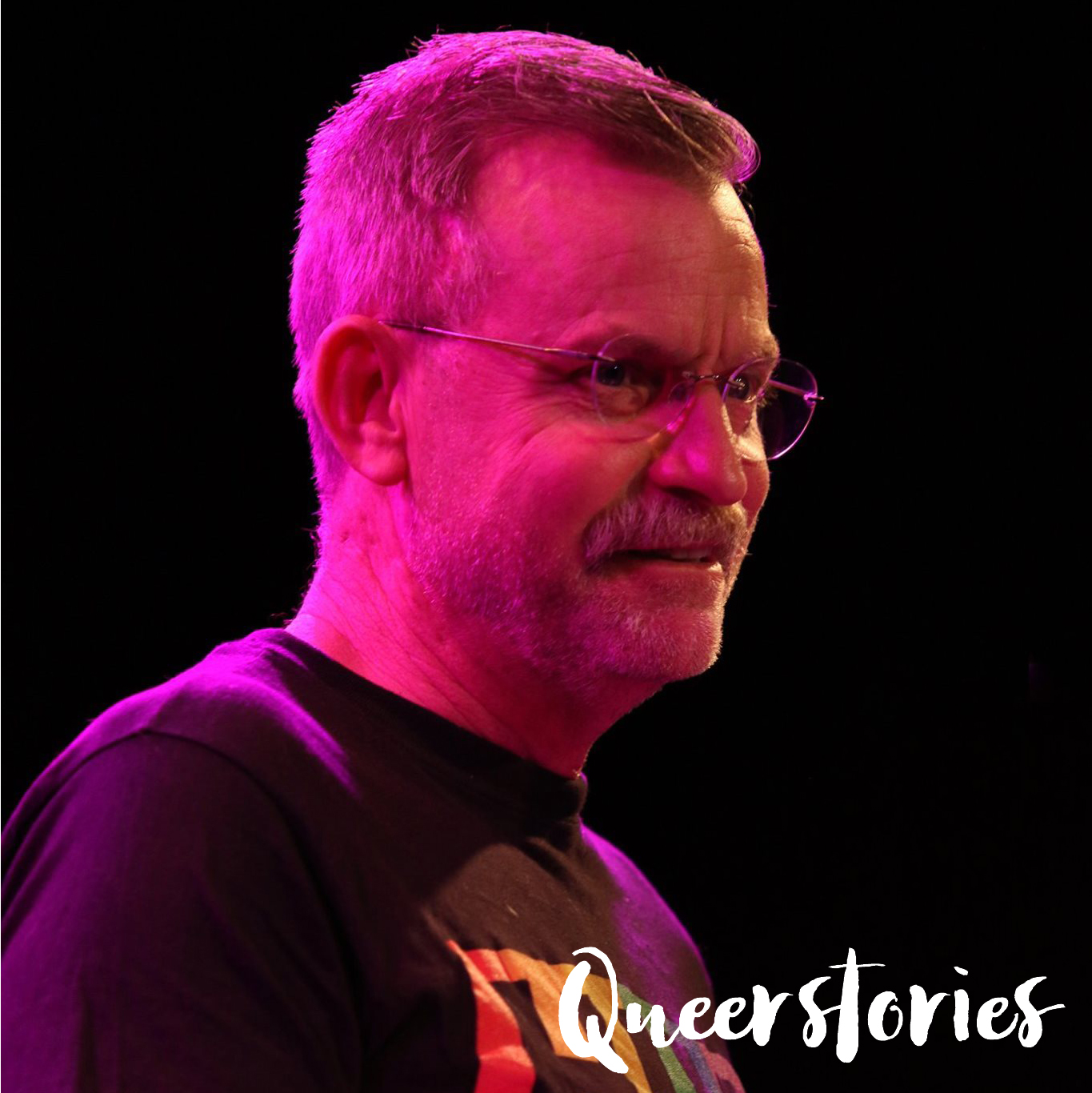 Paul Kidd is a lawyer, activist, writer, and troublemaker. He has been living with HIV for more than 30 years and has been a long-time advocate for people with HIV. His work focuses on LGBTIQ rights, law reform, and legal and social issues affecting the LGBTIQ and PLHIV communities. He lives off-grid in central Victoria with his husband, a fellow HIV advocate, and in his day job, he works with and fights for vulnerable people as a community lawyer at Fitzroy Legal Service. Paul performed this story in Melbourne in June 2019.

This is a story about how I got laid at my boyfriend’s funeral.

And it’s a true story. I got laid at my boyfriend’s funeral, but it starts a long, long time before that when I met him on an overnight train, so let’s start there. I’m 20 years old and on my way back to my home in Sydney from the New South Wales North Coast. I board the train in Casino. It’s dark inside and most of the train is asleep. I find my seat, I notice two young guys sitting across the aisle from me. There is the faintest exchange of glances in the dark. I heft my suitcase into the luggage rack and I sit down.

I travel on these trains a lot, so I have my travelling bag with me. It has everything I need for the journey – a sandwich, a book, a drink and, of course, my trusty magnetic chess set. I never travel without it, even when I am travelling alone because I am a 20-year-old gay nerd on a creaky overnight train that’s going to take 12 hours to get to Sydney, and I’m not going to be bored.

I pop my reading light on and I pretend to read while discreetly checking out the two guys across from me, across the aisle; maybe not so discreetly. After a few minutes, to my shock, one of them comes and sits down next to me. I get my first proper look at him and he is breathtaking. He’s tall, dark-haired and handsome, with a chiselled jawline and a cheeky smile. My heart is beating so fast I feel like it’s going to wake up the sleeping passengers.

“Excuse me,” he whispers, “I couldn’t help noticing your chess set. Would you like a game?” He’s handsome and he’s charming, and he’s a chess player. He is my 20-year-old gay nerd wet dream.

By this point, my heartbeat is so loud I feel like it’s going to drown out the train engine. So, I set the pieces up on the little magnetic chess set and I offer him the first move. He takes a moment, looks at the board, goes as if he’s going to make his move, and then stops, and then he locks his eyes on mine, and he says, “I’m sorry. I don’t know how to play chess.”

“I just wanted to say hello. I’m Daren.” And that’s how our affair began. We never played chess that night or any other. We spent that night, instead, in the dark on an overnight train, secretively whispering to each other and becoming friends, and making out discreetly in the dark; maybe not so discreetly. We got to Sydney the next day, we said goodbye. He was on his way to Melbourne, where he lived, on another train, but exchanged details, and it wasn’t long before I was boarding the train to Melbourne to come and visit him.

Daren and I were lovers for nine years, on and off, but never quite boyfriends. We lived in different cities, we had separate lives. He was disarmingly charismatic, he was impossibly handsome, and just a little bit mad. He thought of himself as Spanish, even though he wasn’t Spanish. He used to call me Pablo. He used to tell people he was from Spain, but he was really just a kid from Whittlesea.

But he wanted to be from somewhere else. He wanted to escape. And we made all of these plans together. Almost every week I would get a letter from him outlining some scheme by which we would be able to send some time together. “Come on Friday. I can take one sick day, and that means we can have three days together. Brian will stay out of the way. He won’t mind.” Brian was Daren’s actual boyfriend, and Brian did mind.

Especially when he walked in on Daren and me going hammer and tongs in the bathroom one time, but Brian eventually came to tolerate me as this other man in Daren’s life. After they split up, we continued. And over the years, for both of us, boyfriends came and went but we kept coming back to each other. He was my first non-monogamous partner. And not my last.

As well as his boyfriend, Daren had a wife. Daren met Vangie, a Filipino woman in need of a visa in his early 20s, and he married her on the spot. Marriage was a privilege that only heterosexuals enjoyed, and for Vangie it was a golden ticket to come and live in Australia. If you’ve got a golden ticket and you can’t use it yourself, why not use it to benefit someone else? That was the way Daren thought.

One day, he asked me if I would consider marrying one of Vangie’s relatives to help her come to Australia. I was, you know, intrigued by the idea. When he said to me that it was Vangie’s grandmother…

… who was in her 70s, and I was in my early 20s, I said I didn’t feel like I could actually do that. He seemed genuinely shocked.

The last time I saw Daren was at Sleaze Ball. He had always been obsessed with Mardi Gras and Sleaze; the two big fixtures of the Sydney party calendar. I went to my first parties with him, I took my first party drugs with him. We would plan our parties for months. We would make these elaborate costumes. Our young lives revolved around those fabulous all-night parties.

Even when he started getting sick, Daren kept coming to Sydney for the parties. By late 1994, he was dying but he insisted on coming to Sleaze one more time. His family: Against it. His doctors were against it. But he was determined. He flew up to Sydney a few days before, and we put him straight to bed. Daren was more than six-feet-tall, and, by this stage, he weighed 38 kilograms. I could just about close my hand around his biceps. He was 29 years old but he had the gaunt face of an old man. I climbed into bed and I held him, but he was so fragile I was afraid I could break him. He could barely walk, let alone dance, so we organised a wheelchair for the party.

He announced that he wanted to take drugs. He wanted to take some ecstacy. We convened a meeting, we brought together some friends of ours who had some medical expertise, and we had a discussion about this.

And we agreed that if he took ecstacy it would kill him, but we figured he could have a little acid.

We calmly discussed what we would do if he died at the party. Daren spent that last Sleaze Ball in his wheelchair, arms waving, dancing in the Dome. We took him home in the morning, we put him on a saline drip for 24 hours, and we sent him back to Melbourne to die.

The last time I spoke to Daren was three weeks later on the phone from Sydney. He couldn’t eat, or walk, or get out of bed. I asked him how he was going. “Everyone reckons I’m going to die in the next few days,” he said. “I’ll come tomorrow,” I replied. I had a flight booked for the weekend, but I could change the date. “No, no, no, no. Don’t come down yet. I’m not going to die yet. I’ll stay alive until next week so that I can see you on a weekend. Come on the weekend. We’ll spend some time together, and I’ll die next week.”

He was so strong-willed I actually believed him. He died the next day.

Daren’s funeral was on a Monday, the day before the Melbourne Cup. I flew down on the Saturday, I hung out with his friends and his family, looking at photos and sharing memories; the usual. His parents were distraught, but most of us were relieved that his suffering was over. To take my mind off what was going on, the night before the funeral, I went out to a sex club, as you do. No big deal. I hooked up with a cute boy. We had fun. He didn’t talk very much.

The next day, the funeral was in the Fairfield Hospital Chapel. Daren had, of course, planned the whole thing meticulously. He left detailed instructions: What music to be played, what everyone should wear. At the end of the service with my friends, we lifted his casket, and as we carried it down the aisle, I saw a familiar face: The guy from Club 80 last night. He saw me, too, and he smiled. And I thought, “I just got fucking cruised at my boyfriend’s funeral.”

But that cruisy smile was such a flash of joy in a such a sad moment. I was literally bearing the lifeless body of the man I had loved for nine years, just as I believed it was inevitable would be bearing mine in a year or two. I was 30 years old and I had been to dozens of funerals. So much of what we loved had been lost, and so much still remained, and in the midst of sadness and grief, that moment of excitement was so important.

At the wake after the funeral, the boy from Club 80 appeared and he introduced himself as Bruce. Bruce had lost his boyfriend too a few months earlier.

After the parents, and the aunties, and the cousins had had their tea and cake and left, Bruce rolled a joint. Someone else produced some speed. Someone else produced tickets to a gay dance party that was happening later that night, and we started talking about what we would wear. While the others started trying on outfits, Bruce and I snuck into a bedroom and we fucked. I got laid at my boyfriend’s wake.

We fucked because we were surviving at a time when death was all around us. We fucked, and we partied, and we danced. We lived as well as we could because we knew every day had to count for something, otherwise, what were all of our friends’ lives for?