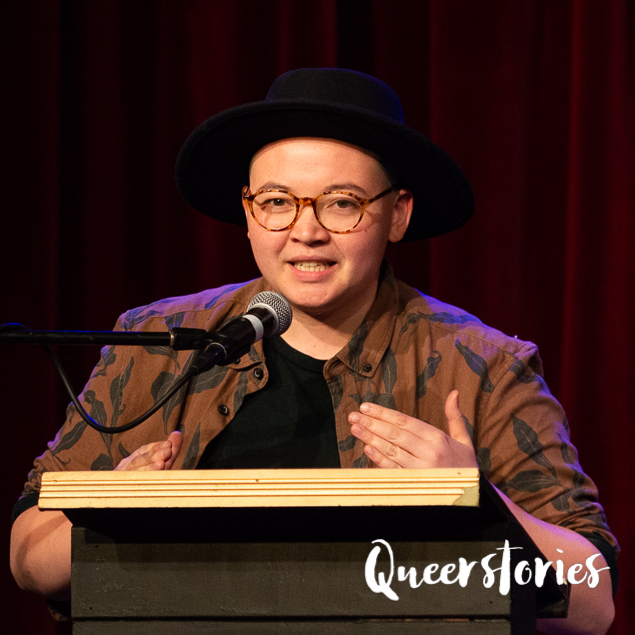 Yen Eriksen is an experienced educator and workshop facilitator who has worked across community media, the women’s sector, fundraising, and higher education. They were the 2015 Young Person’s Human Rights Award Medalist awarded by the Australian Human Rights Commission, and they’ve performed this story in Sydney, Melbourne, and Canberra.

Do you remember in the early 2000s when “hobo” was really in? When you paid $200 for jeans with holes in them, and if they didn’t have holes in them, you could cut holes in them, and then you’d use safety pins to fix it back together again? Well, during this peak of fashionable sartorial brilliance, I acquired my lucky shoes. They were a pair of Chuck Taylor Converse shoes. You know, the canvas shoes, rubber soles, high tops, laced in the front. And mine had fake patches on them. They were the epitome of teenage-shoe, made famous by the likes of Ellen, soft butch lesbians and man-children.

They were the first pair of shoes I ever bought for myself. I took my hard-earned $70 – expensive – and picked out a pair of these patched-brown “hobo-chic” Converse shoes. I loved these shoes. I wore them so much they actually started to embody their hobo spirit. The fake patches needed patches.

On the week of my 18th birthday, I moved out of home and I went to Canberra. I left behind suburban repression, and I went for the bright lights of the big city. [inaudible 01:56] I was seeking so much from Canberra. I wanted an adult life, I wanted education, and I wanted homosexuals. I wanted to meet real homos, real gays, queers, lesbians, like the ones from the internet.

I knew they existed and I was yet to meet any.

I wore my lucky shoes that first day in town in Canberra. I wore them as I walked across the campus at ANU. I wore them while I was looking for the queer department, trying to spot the rainbow stuck to the door or the window, trying to work out where they hid. And I wore them as I walked through Civic – which is the city in Canberra – trying to find the gay bar. I’d never lived in a place with an actual gay bar. It was just one gay bar. It didn’t take long for me to gather a gaggle of gay men who would take me dancing to Cube – which is the one gay bar – and they would show me how to drink, where to vomit…

… where to avoid sitting in vomit. And I loved my crew of tall, attractive gay men. And I had no trouble meeting gay men to befriend, but I never had any gay female friends. There was no women. There were never any lesbians.  Soon, the gay bar began to fall short of expectations. I’d always thought it would be more like The Planet in the L Word, and full of older, knowing women who would eye me up, and then take me by the hand, and *Soft voice* show me how.

They would show me how to be a real lesbian. And, of course, I had no game. Shane from The L Word only ever taught me that picking up was looking at someone across a bar with a sultry glance, and then… Boom! Lesbian kissing! So, young me, of course, I spent a lot of energy just staring at strangers, trying really hard to make them swoon with passing glances – awkward glances…

One night, it’s about 1 A.M., and Civic is getting good. I’m on the way to the gay bar with my gang of handsome gay men. We walk past this girl sitting on a bench, and she’s crying.  I fancy myself a gallant gentlemanly type so, of course, I go over to her and say, “Are you okay? What’s going on?” She says, “I’ve had a fight with my boyfriend.” And she just really wanted to go home but she couldn’t, because she just couldn’t walk anymore. She couldn’t even walk to the taxi rank because of her shoes. Her feet hurt so much. I look at her shoes, and you picture these big, six-inch black leather, no-frills, just like solid high heels.

Like any good aspiring student politician, I set out to solve her problem. I looked down at my shoes, and, of course, I was wearing the lucky shoes. Yeah, I wore them clubbing, okay? I thought I looked kind of cute and tomboy-ish. I don’t know. Anyway. And I took them off and I offered them to her, and I said, “Why don’t we swap shoes? I’ll take your shoes and you take mine. You go home. Okay?” We swapped shoes, we swapped phone numbers. Her name was Sam, and she promised she would return my lucky shoes: Good, I wanted them back. She was really grateful.

So I put on these fuck-off high heels…

…and I walk into the gay bar, I walk into Cube. And, I guess I was channelling drag queen glory or something. I felt like I was really pulling it off. And do you know… I mean, I don’t know, I don’t wear heels… Dancing in heels is a next-level kind of experience. Literally new heights.

That was a good dad joke, aye?

I’m dancing in Cube. Then, it happened: A girl caught my eye. She looked at me with a sultry L Word glance and, before I knew it, we were dancing, kissing, dance-kissing. It happened! I couldn’t believe it. It was finally happening to me! She was my dream girl. She was tall, red-headed, feminine, and she was clearly a “real lesbian.” And I was in love. I had met the one. And she was a great kisser. So it’s going really well. But then there’s a tap-tap on my shoulder, and my gay men, my boys, they come and they tell me they’re leaving. They really want chicken nuggets. “We gotta go!”

YEN: I know! I thought those were the rules of gay bars and gay boyfriends, like, if they said, “We’re going to Maccas,” then you go, right?

YEN: True story. So, this is how it really went: I asked my new love – the love of my life – to put her number in my phone. She puts it in. She puts in her name as ‘E’. She’s very mysterious. Then we walk off, we walk down to Braddon Maccas. Canberra shout-out if anyone knows that one. And I’m dipping chips in my sundae, staring drunkenly at my Nokia brick phone… Another one for you, Kate… look at the phone, really happy knowing that I had finally met her, you know? E – she was in there. My 100% bonafide real lesbian. I met her! I have her number, all right?

The next day, squeezed into my tiny college bedroom, my best friend/neighbour – that’s how it is in college – helped me draft the perfect message. We’re sitting on my… Picture this: Sitting on a tiny college bed in a tiny room, where there’s just like the bed and the desk, and we’re waiting for the perfect tiny moment when we can send the text message. We decided it would be 1:32, which is specific.

And it’s not too early, it’s not too late. It’s the perfect amount of keen/not keen. Like, I just woke up at like 10 or 11, had some food, and now I’m going to message you kind of level, right?

This is how it goes:

“Hi, it was good to meet you. Coffee some time?”

Sent. That’s it. Okay. I’m sitting, waiting; waiting on the tiny college, and nothing. No reply. Two hours: Nothing. Two days: Nothing.

Yeah, it’s passed the window. Five days: Nothing. I was heartbroken. She was the one, and why wouldn’t she message me back? A whole week had passed. It was time to go out again, and my gay gang were obsessing over why she hadn’t texted back. I mean, I say “obsessing”. This was just the conversation in the taxi. They were obsessing about why she had not texted me back. Was she not single? Was she from out of town? Was she a spy? This is Canberra, after all.

Or, was she straight? Possibly. Anyway, one of my more adventurous friends, he suggested a plan. He would put her number into his phone and then he’d call her and pretend to be a bank teller, and then try and find out something, like some extra detail. Like, for instance, her name.

Which I didn’t know. Okay. I’m in the back seat of the taxi. He’s in the front. I read out the number: 0412 338 911. Oh, there were too many numbers. Disaster! She made a mistake. She put in 11 digits, and she’s sitting out there somewhere in Canberra, wondering why I hadn’t texted her. I was the asshole. One number between me and the one real lesbian I had ever met. The search was on. All the gays were on the case. We had all of Canberra.

They got on Grindr. Everyone. Everyone was looking. Okay? We hit the gay bar – the one gay bar – to search for the redhead named E. Thursday night: Nothing, Friday night: Nothing. Saturday night: Nothing. No one knew her. I mean, it’s a small town, right? The bouncer told us to stop asking and piss off, and no one could remember her or find her. So, of course, she became the stuff of legends. She was the woman who got away, or perhaps she never existed. I was pretty drunk.

How could I have been so dumb? I should have given her my number. Or, you know, I could’ve stayed in the bar. I could’ve asked for her name. Rookie. Rookie. So, some time passes and I give up on the dream of finding her in my search for real lesbians. And then I get a message from Sam; you all remember the girl from the other night, the one with my lucky shoes. Okay, so we plan to meet up for coffee. Of course, I want my shoes back and she wanted her shoes back. I don’t know why, but…

I suggest we meet up at Braddon Maccas. So romantic. And we sit across from one another in the McCafe, and my lucky shoes on the table and her heels sitting next to them on the plastic table.  We’re chatting and she tells me that the reason she was crying that night was because she had been fighting with her boyfriend, and she didn’t know but it just wasn’t working and she had been really upset. She had just been really confused. Now, some time had passed and she knew why it wasn’t working. She knew it wasn’t working because she was gay.

She was really a lesbian.

That’s it. thank you.