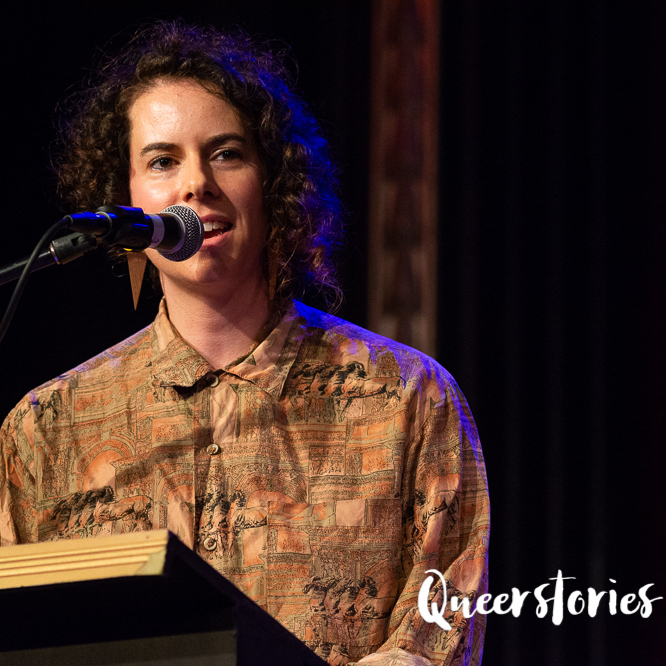 Kate Duffy is a community lawyer and educator. She established the Safe Relationships Project, a domestic violence court assistance scheme for the LGBTIQ community whilst working at the Inner City Legal Centre. She also established the domestic violence resource, Ask LOIS, while working at the Women’s Legal Service NSW. More recently, Kate has been working at the Marrickville Legal Centre as a Youth Solicitor, and at Legal Aid NSW presenting crime prevention workshops to high school students. Kate is also a retired singer-songwriter, vegetarian aspiring vegan, keen composter and gardener, and a mum.

Okay. So 2009. What a year that was. It was a very gay year for me. I think most of my years are gay but this one, in particular, was very gay. I was 25 years young, fresh into a new romance with the love of my life. So gay. I was living in a queer sharehouse in the very queer Enmore. It was one of those grand old Inner West terraces where the only toilet was outside, and you always had to check for spiders before sitting down, and it had other unique character traits such as holes in the floor, and water would gush into my room when it rained, and someone lived in the cupboard underneath the stairs.

I loved it. I called it the Haven of Joy, and this was long before Sparking Joy was a thing. I did later in the year move out into another queer house, which was literally across the street. It was living with Maeve, but before she became a celebrity gay.

And so, of course, it was a bit fancy. I also that year started my first “real” professional job at the Inner City Legal Centre, an LGBTIQ specialised legal service, so my life was surrounded by gays and queers. It was wonderful. Probably one of the best things about this time was that my girlfriend was living around the corner from me, which was very convenient, and I would highly recommend it to anyone out there starting a new relationship. She was sharing a house with two dear friends of mine – one happened to be an ex-girlfriend.

Thankfully, we were friends. Yes, very lesbian of us. And a high school friend of mine, who happened to be dating Maeve, so, of course, it became my second home.

As a little queer neighbourhood, we would make the two-minute trek to the Sly Fox on a Wednesday night to hang out the front of the venue and smoke, and sometimes we would even go inside.

On Saturday nights, we would sit in each other’s back gardens drinking and cursing how Enmore Road and King Street were too hectic with the weekend straight crowd. And on Sunday nights we would bump into each other doing a sneaky IGA ice cream run. But the gayest thing that happened in 2009 was when my girlfriend introduced me to the Moon Cup.

The Moon Cup is a menstrual cup. For those who need me to explain further, it is a cup made out of silicone that is inserted into the vagina to collect menstrual blood. Yes, that’s right, people, I’m talking about periods!

My 2009 was all about the Moon Cup. It changed my life. I took it upon myself to make a public service announcement to all my menstruating friends and family that they can stop using tampons and pads because the Moon Cup was here. I had mixed reactions. I can still remember my mother’s face as I told her about the Moon Cup as if to say, “Here we go. Another crazy idea from my hippie gay daughter.” Then, an admission from a straight friend that she prefers to use a tampon with an applicator because she doesn’t like to touch herself.

*Audience “Aww” in sympathy and gasp*

Other reactions I met included dead silence, which made me come to the realisation that this topic was not a topic that all my friends wanted to engage in. Though, of course, there were many like-minded peeps who went on to become true Mooncup believers.

Later that year, I was at my girlfriend’s house enjoying a lazy Saturday while she was at work. Her two housemates were also out for the day, so I had the place to myself. And so I did what any good girlfriend would do on such a day, I decided to sterilise our Moon Cups.

I researched the best way to sterilise it, and read that boiling it in a saucepan of water for seven minutes would do the trick, so this is what I did. Now, I understand that in 2009, smartphones were available and people did have them, but I was not one of those people. I had a little brick Nokia, and the most entertainment I got out of it was by playing Snake. But on this day, I decided not to sit in the kitchen with my Nokia phone, playing snake whilst waiting for water to boil. No, I decided to venture up the hallway to my girlfriend’s bedroom and do what anyone does when they are waiting for something: Have a look at Facebook on my girlfriend’s laptop. “Just a little look,” I thought.

Whilst scrolling, I saw a link to a young queer girl’s blog titled Effing Dykes: Your Girl Gaydar Sucks. Let Me Help You. And, of course, I clicked on it. I scrolled through the young American’s blog, giggling to myself as I read through blog posts titled Boxes of All Sizes, and, Busy Hands are Happy Hands. And I remember so clearly chuckling at the post that asked, “Are they Lesbian or are they European?”

It was around this time that I began to hear a beeping sound. It was quite loud and ruining my enjoyment of reading about the different types of lesbians there are: Sporty dykes, arty dykes, nerdy dykes, baby dykes, power dykes, butches, femmes. And, of course, I wanted to read the blog post, Which Character of the L Word are You? Because I wanted confirmation that I was Dana or Alice, obviously. Or, perhaps, I just wanted to check that they didn’t have any pictures of me on there, as I did feature as an Extra in Season Five, Episode Seven.

Yes! It’s true! It’s true. My back, my shoulders, my side. They feature heavily in the episode aptly titled Lesbians Gone Wild.

But I digress. My glamorous career as a TV extra in Vancouver is perhaps another queer story.

The beeping was getting very annoying, so I shut the front window, thinking that it must be coming from a car outside. Though to my surprise the beeping did not get quieter. It suddenly dawned on me that the beeping was coming from the hallway. It was the fire alarm! Oh, shit! The Moon Cups!

I ran down the hallway to the kitchen. I turned the gas off at the stove and peered into the saucepan to find that all the water had evaporated. What I saw next has been cemented into my mind forever. Two moon cups, sitting there in the saucepan, as I had put them, in their perfect Moon Cup shape, but not made of silicone no more. No. They were now pure ash.

I went to touch the ash Moon Cups to see if they were real, but they crumbled into thin air immediately.

Now, I’m not good with loud sudden noises and I’ve never been any good with fire alarms. They get me into a state of panic. I grab a broom and I try to whack the fire alarm off the ceiling, hoping I would hit an Off button, failing terribly. A neighbour from the house next door appeared at the front door asking, “Is everything okay?” And I say… *Shaky, panicked voice* “No. I can’t stop the fire alarm.” Luckily for me, she was clearly the type of person who does not panic when they burn their toast. She calmly turned the fire alarm off and I was forever grateful.

I returned to the kitchen to see black specks of ash all over the walls and ceiling. I was so relieved I hadn’t burnt down my girlfriend’s house, though I was mortified by the task ahead of cleaning the kitchen. Therein went my lazy Saturday.

I learnt some very important lessons that day: How to turn off a fire alarm, to never again read silly blog posts about what type of lesbian I am; I’ve failed at that one.  To always be present in the kitchen when sterilising moon cups. And that my girlfriend is a real keeper because instead of thinking that I was a complete fool, she found my antics charming. Needless to say, we soon moved in together, and we have been together ever since. And have accumulated a small child along the way, so I think it’s fair to say that period of my life paid off. Thank you.