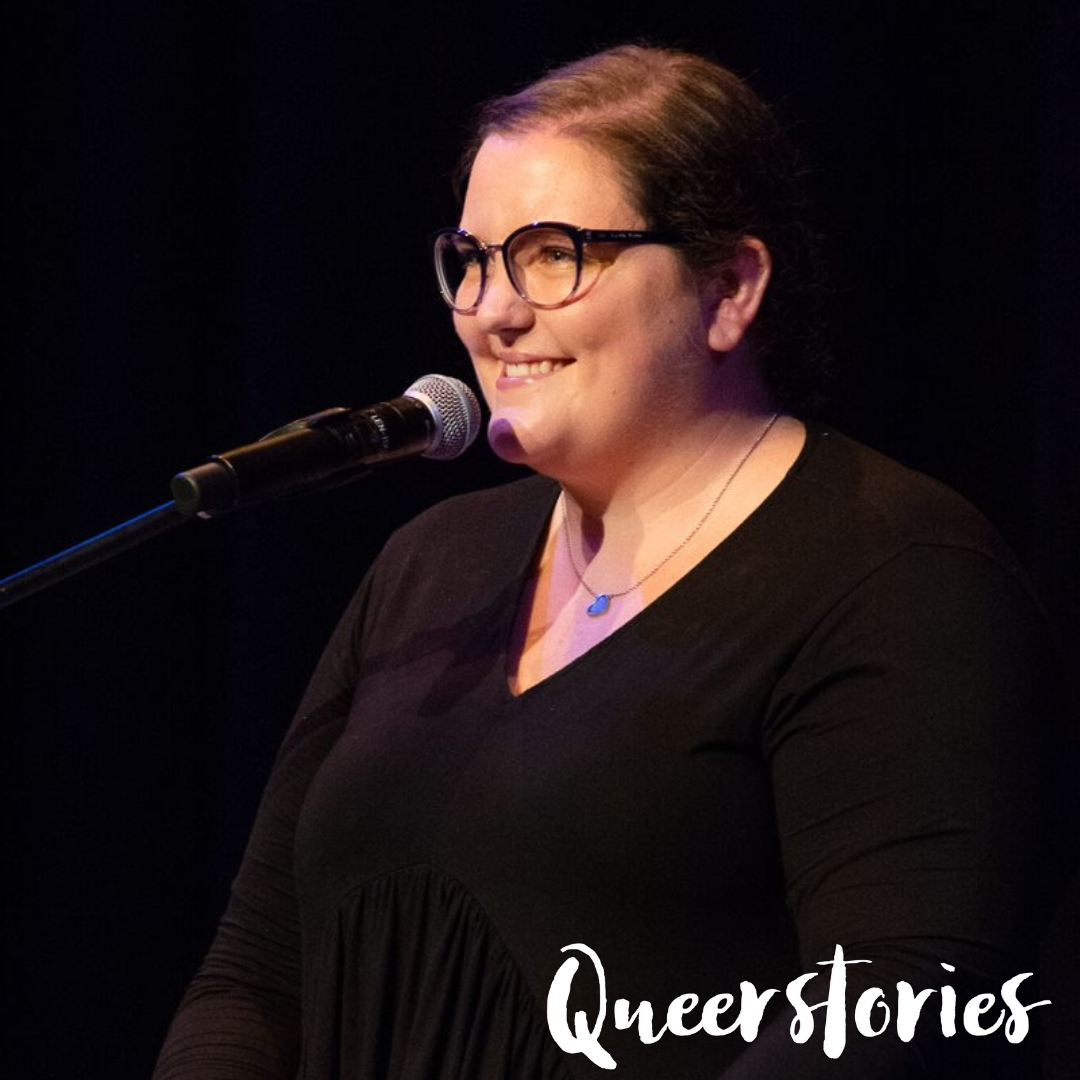 Laura Hart trained at Impro Australia, Improv Theatre Sydney and UCB. She’s a Raw Comedy State Finalist, and in 2017 travelled to New York to perform in shows Confetti Gun and Queer Far Wherever You Are. Laura was a 2017 Young Social Pioneer with the Foundation for Young Australians, developing and sharing her improv comedy program for people with anxiety. She is a member of the Improv Theatre Sydney faculty and ensemble where she is the company’s Outreach, Diversity, and Inclusion Officer.

Laura also has the distinguished position of being my assistant. I was really excited, having had her tell me so many funny stories when we’re working together, to book her to perform at Queerstories Western Sydney. It would have been incredibly awkward if her story was bad and we’d have to continue working together, but luckily her story was amazing and incredibly well-received, and I’m thrilled to have it now on the podcast.

Two days ago I turned 28. Birthdays…

Yeah, thank you. Birthdays get weird as you get older. You stop celebrating so much because you’re inching closer to death, and the only gifts you get are small and extremely practical items from your family members. This year my sister bought me clinical-grade sweat cream from Chemist Warehouse because she, quote, “Knows I get clammy hands.”

If you had asked me when I was a kid what I would be doing right now, I would have told you confidently that I had bought a house, married my husband, and bore two children – Monica and Julie – two girls because boys are gross. Either that or I had taken my final form as a golden labradoodle. The fact that I am a single lesbian who rents a one-bedroom apartment, has three jobs, a dog – and medically sweaty hands – wouldn’t have jumped to mind.

The truth is, I have never really wanted to be single. I am a hopeless romantic in the truest sense of the term. I am hopeless at romance.  My first serious relationship occurred in my first year of uni. We will call her Rebecca, because that is her name, and also because every lesbian’s name is Rebecca.

Seriously, I have dated three Rebeccas.

I had moved out of home for the first time, and I had my Toyota starlet hatchback that came with a beefed-up sound system that made the whole car shake; courtesy of the previous owner. I would blast Spice Girls ironically as I drove through campus, cementing my new “weird but non-threatening because she is funny” girl status.

I did not know how to court a woman. I remember seeing Rebecca for the first time at the Uni Bar, and I decided it was fitting to impress her by showing her how well I could play dead.

Seriously, I played dead on the floor. It worked.

And we quickly made our way back to her dorm room. Neither of us had any idea about what to do next. I rapidly scanned my brain for any reference points, like workout DVDs? No. The L Word? I had just started watching but I remembered a particular scene between Shane and Carmen in the recording studio.

Oh, yeah. That was a start. I had also watched a YouTube video where a lesbian blogger had talked about “chicken pecking” a girl. I didn’t really understand what that meant but I…

I joined the dots. Surprisingly, this relationship was a success and we dated for two years. When she informed me one day suddenly that she no longer loved me, I was heartbroken.

Thank you. Even more so when I found out she had been seeing a straight cis male journalist at the Sydney Morning Herald.

Things didn’t really get better romance wise from there. I joined a lesbian soccer club to try and meet people, which was amazing and I highly recommend you do so. I learned the phrase, “Don’t screw the crew,” and I blatantly ignored it, getting swept up in the drama when the person I slept with, slept with the full-back but secretly had feelings for the centre-mid.

At the same time, I was diagnosed with coital cephalalgia, which means sex headache. Basically, whenever I was approaching or achieving the point of orgasm, I would get a thunderclap migraine at the back of my skull that lasted anywhere from three to 24 hours. It is rare and happens mostly to men, but I am special. Lucky me! So, after a quick visit to an MRI to rule out a tumour, I was given some beta-blocker medication and advised to avoid orgasms. Avoid orgasms. Like, actually, fuck my life.

After several months, it passed and I was able to wean off the meds, and it has not reoccurred, so I am fine. Thank you, ladies.

I had a couple of rocky relationships after that, which were the kind that was amazing when it was good but totally and completely sucked when it was bad. The last one ended when she came over to my house to break up with me during her lunch break. After that, I decided to take a break. I needed some time to rebuild my self-esteem and reconnect with my body post-sex headaches and weight gain, and it ended up kind of being a long break.

Two and a bit years later, and I am only now starting to come out of my romantic and sexual hibernation. Having spent so long solo, I was a complete horn dog and also needed to make some cash on the side of my two jobs to make ends meet. After some late-night Googling, I discovered my new dream side hustle – professional sexting. It’s really a thing. It’s a thing. You get 30 cents per text, which, and I’ve never been good at maths, is not the best money but also not to be laughed at.

I applied and I was given a trial. They sent me ten example texts that I had to respond to. I had this in the bag. A had a Bachelor of Communications, a passionate at heart, and perfect grammar. Clear eyes, full hearts: Can’t lose. When I was asked, “What are you doing?” I replied things like, “I’m just walking slowly down the beach at dusk, with the wind in my hair, and I’m very, very wet.”

When they texted, “What are you wearing?” I said, “A sheer crimson teddy set with rosebud appliques, and I’m very, very wet.”

Basically, I ended everything with being wet, figuring that my lack of heterosexual sex knowledge would be made up for in liquid enthusiasm. Surprisingly, I did not get that job, which turned out okay because, soon after, I applied for a position as Maeve Marsden’s assistant and I got that!

Which is great but my ego is still bruised from my sexting saga.

So I downloaded all of the apps. You know, the apps. I went on a first date recently, which was going well until she discovered that I had never read Harry Potter, nor had I listened to the audiobooks, and I never intend to, and that was a deal-breaker for her.

Truthfully, I don’t know what my deal breakers are. I’m at a stage where, as basic as it sounds, I just want someone nice.

I took two years off to try and learn to love myself and accept my body, but that’s a really fucking hard thing to do. I realised that it might just be ok to date while I’m figuring that out. If I waited until I was the most confident, anxiety-free, babein’ version of myself, I’d be taking my dentures out to mack on the other residents in my nursing home.

So, right now I’m just trying to accept myself where I am – someone with the marks of some bizarre ups and downs, who thinks she is a babe only sometimes, and who gets clammy hands when she’s nervous.