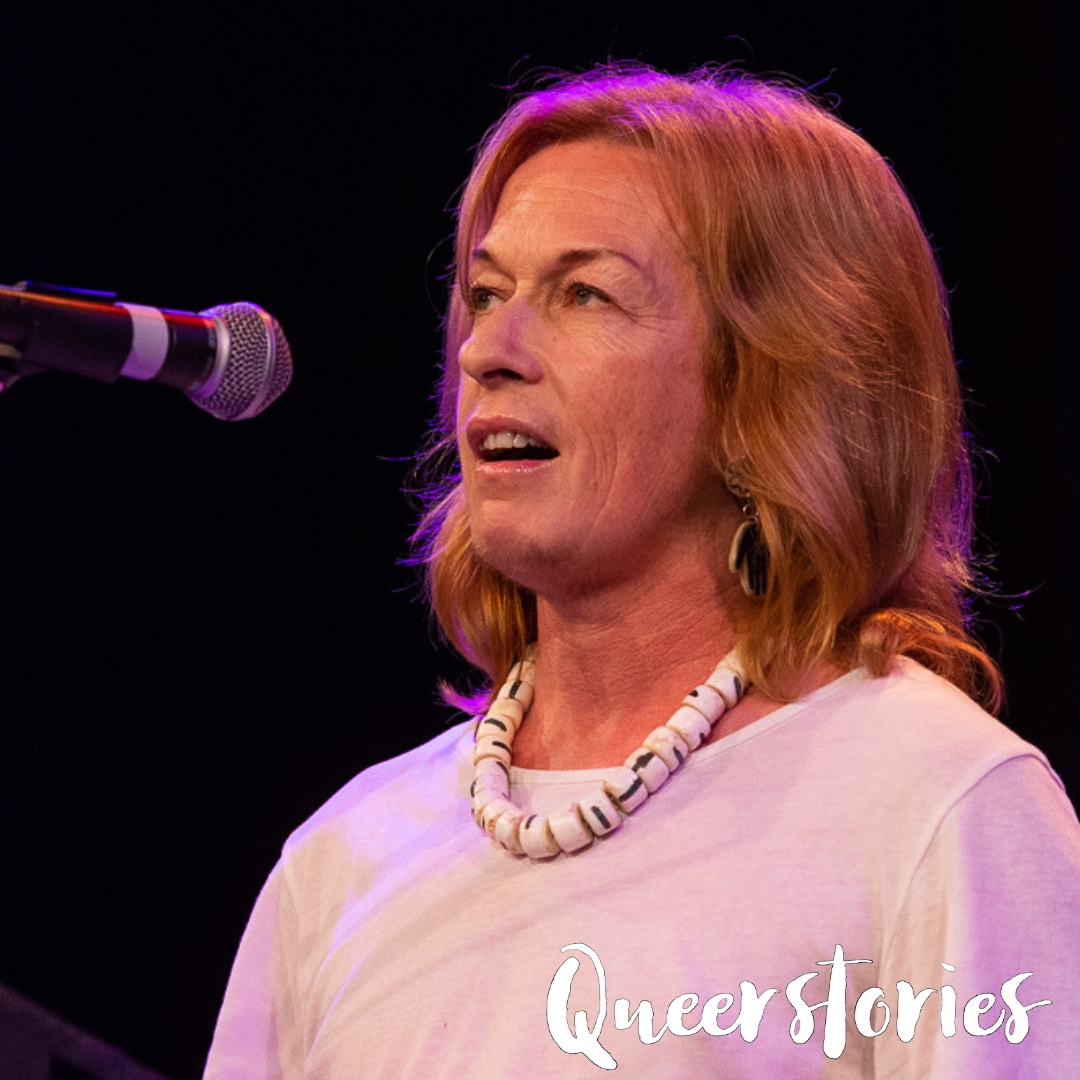 Julian Dahne Molony is an interdisciplinary artist who works with painting, video, performance and fibre art. They also operate an Artist Run Initiative named Intersect Space based in Marrickville. This piece is adapted from a story they wrote for Archer Magazine, and was performed at the Archer Magazine launch in Sydney in March 2019.

By the time my son was 12 and we’d moved back to Sydney, the gap between the two genders within me began to broaden. I had come out to him and my sisters as bisexual. I’d packed away my “girl” clothes and cut my hair short to look masculine and scare away straight men.

At 46, I went out with my first queer guy who talked about how he felt quite female, and that he was getting counselling at the Gender Centre. I looked at the centre’s website, and discovered for the first time the spectrum of genders, and realised that I was “gender-questioning.” In that same year, I learnt I had worn the cartilage off my knees and was told I’d never be able to run again. The years of rigidly controlling my “female” body through exercise and strict diets were coming to an end. This was probably the catalyst for my journey into seriously addressing my thoughts about “the other half,” my secret self.

My three sisters often wished we had a brother. I didn’t really notice an absence of masculine energy. After daily push-ups from the age of five, I held the unchallenged title of first place in our arm-wrestling competition. I loved testing my strength and showing off my large biceps.  However, I was equally interested in designing clothes and experimenting with make-up.  Our father, an Irish ex-squadron leader in the British Air Force, had quietly wished for boys, so he encouraged our tomboyish behaviour. Almost every Sunday, we would head to the Royal National Park for the day. I loved to help Dad build the campfire. My parents would make billy tea and damper, throw potatoes in the embers, while the four of us went exploring for hours.

From the age of 11, I began helping my Dad with his home insulation business. A whole Saturday would be spent driving to a country town, lifting and emptying huge bags of industrial insulation for hours, and then arriving home at dusk, covered in dirt and sweat. Although the work was hard, being out on the open road with him made me feel like his son.  My parents often told me that I was the beautiful one in the family.  I secretly began to study my face, trying to find out what they were referring to. My mother loved the beauty and style of Hollywood’s actresses from the ‘30s and ‘40s, and I wondered about one day growing into one of those classic sirens.

At 17, I left home and moved to the inner city where I discovered the Exchange Hotel and my tribe among the post-punk scene. The girls had short hair and wore cool boy’s clothes. The boys wore eyeliner and jewellery. Still, their clothing choices were not indicators of their gender identity or sexual preference; there were limited words for those beyond ‘gay’ and ‘straight’. I just saw them all as simply different from the rest of the world, and fiercely proud of it. It was around this time that my own gender became troubling. By 18, Oxford Street felt like my home, yet I hadn’t really come across anyone like me. I studied my face in the mirror daily. It seemed androgynous – like a blank canvas – and that I needed to paint on the makeup to convince other people that I was a girl.

I knew I was born with a “girl” body, something I was starting to resent. I looked at men on the streets, more jealous of their bodies than attracted to them. My friends – all gay boys – were finding love and sex, but I was just a “fag-hag,” a “hand-bag.” They all told me how stunning I was. I became attracted to some of them, and felt guilty and lost about it.

I tried being with straight men, but to be read and touched as a woman felt weird. I learnt to perform what I believed were the right moves and sounds that I thought a woman should make. Once, I was introduced to a tough-looking guy. He was heavy-set and dressed in black leather. I was later told he’d had a “sex-change.” I tried to imagine what that might look like under his clothes but dared not ask about it. Then, drag queens I met, that I knew, called one another “she” and “her” but then many of the gay boys that I knew did that, too.  These were the only variants of gender that I encountered until 30 years later.

I moved to Bondi Beach in my early 20s and, there, straight men were all around me. I became obsessed with looking perfect. Through my sunglasses, I scanned the streets and noticed that most of them were checking me out. I became addicted to it. I knew I was attractive, and so their attention made me feel better. However, back at home, I obsessively checked for muscle growth around my arms and legs and back. I wanted these rippling muscles that matched those men that looked at me. I felt I was being judged, not only by people but also by the dominant images of in advertisements that I passed at billboards, bus stops, magazine stands. Regardless of how fit I was in reality, the body that I saw in the mirror was huge, sloppy, dimply. In my mind, it was “pathetic and useless” simply because of its gender.

I married a conservative Australian man in the mid-‘90s and tried to convince him that my primary role… He tried to convince me that my primary role as a woman was just being a homemaker. When I discovered I was pregnant at 33, the reality of having a female body was an indescribable shock. After years of running, gymnastics, weights and diets, I was afraid of what my body was going to do to me, finally. However, watching my baby grow inside me was really exciting, but I didn’t tell anyone of my fears as my body morphed into what I saw as a huge gestational sac.

When I gave birth to my son and was shown how to breastfeed, I was really happy that my breasts finally had a purpose. It was great. I immediately resumed training and ran my first half-marathon when he was six-months-old. I didn’t go to mother’s groups. I just focused instead on finishing my second degree. When my son was three, I began a Masters of Fine Art and then moved to the Hunter Valley with my husband.

In my late 40s, I met a transgender man with whom I immediately felt an affinity to. He shared with me things I believed existed in no one else’s world but mine. I went to the Gender Centre to talk for the first time about my gender dysphoria, and by my second visit, I was asking about how soon I could access testosterone. I came out to my son and sisters as transmasculine. My father passed away within a few months. I didn’t get to tell him about my journey, however, I finally told my mum when she asked suspiciously one day if I was taking steroids.

I settled into the realization that I was gender-fluid by that stage. And now, after a hysterectomy, mastectomy and five years on testosterone, I still look pretty female. I’m hard to define. I feel fine about that because I love playing with make-up, and I’m fine with who I am. I feel like I’m really two halves of a whole. I leave the door open to descriptions, as it took me so long to claim my true identity, and I still may have more learn to about myself. My friends sometimes get pronouns mixed up, calling me she, they, or he. I’m not really worried about what I’m read as. I am many things, and I love that about me.