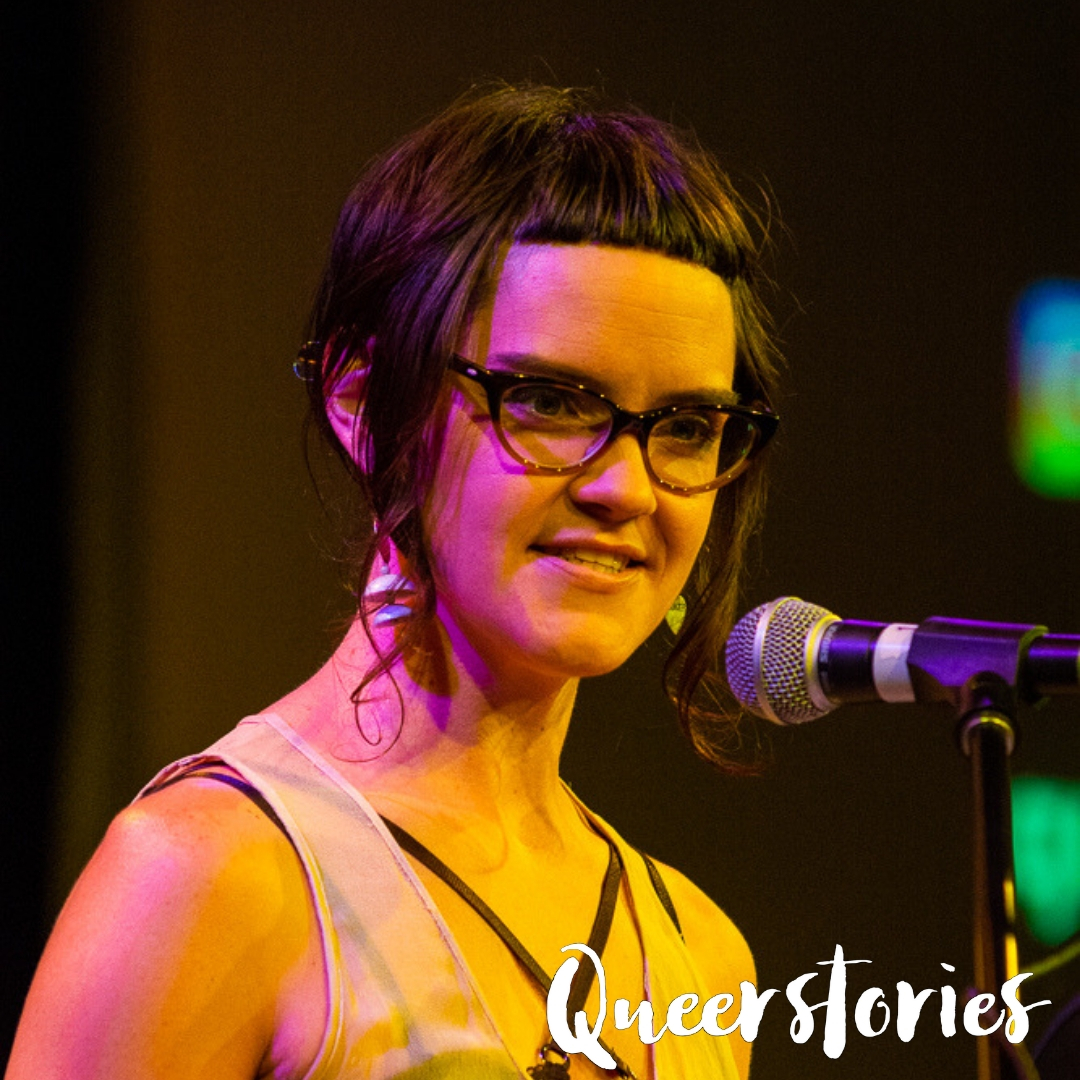 Gala Vanting lives on Gadigal land. She is a sex worker, writer, educator and advocate for the rights of sex workers. This story was performed at the Archer magazine launch in Sydney in March 2019.

Four scenes from my journey to parenthood.

When I met her, she was six. She had long, dark brown Emily-the-Strange hair that she hid her face behind, and she gave nothing to strangers, which I was. She had a collection of crystals and a pet blue-tongued lizard with a disability – one dead leg that dragged at an obscene angle as it crawled. When EP – short for Excellent Pet – later became an amputee, she kept its severed leg in a bottle of formaldehyde: She’s that kind of child.

I spent a Bad Dog recovery day with her, both of her mums and her little sister, who, at the time, was probably the worst thing that had ever happened to her, having taken valued, nurturing two-on-one time and brought it to a literal screeching halt. By dinnertime, having warmed enough to me to engage me in the stringing of plastic beads to make the same sorts of necklaces you can buy at Gorman for $80…

My heart grew three sizes, and I admired her ability to envision the queer family structure it had taken me a third of a lifetime to imagine.

These days, as a nine-year-old, she writes dragon script, re-arranges her ever-growing collection of crystals weekly, – or bi-weekly; it’s hard to know what she does on the weeks that we don’t have her –  and has made it known that she would very much like a cauldron as a gift. She believes that she cast a spell that conjured the thunderstorms that came through Sydney this past Wednesday, and I wonder what other powers she believes herself to have when she tried to use them to conjure that ideal scenario and, instead, got two houses and a confusing new schedule, and a complex logistics challenge in transporting her crystals from house to house. I wonder whether she ever doubted her magic or wondered if it had stopped working.

It’s school holidays, and she is seven, and my partner and I have taken her to Taronga Zoo. It’s our first triple date. I am hands-off with children unless they have explicitly instigated physicality with me. I would appreciate if they reciprocated this, given the epidemiological bomb sites that are primary schools…

… but I don’t allow their repeated violations of my personal space to budge my commitment to respecting theirs.

After 15 years as a sex worker, I’m pretty adept at navigating the nuance of consent and physical communication, which is a pretty awesome thing to possess if you have any ability to influence the way a young person experiences those things. Lately, she has been warm with me and physically affectionate, and it is breaking me open. Every time she does it, I begin to feel myself being submerged in this murky soupy mess of validation, vulnerability, pride, care and, of course, shame for feeling feelings, especially about a child.

*Audience laughs and Awws in sympathy*

To receive her trust in this way is deeply confronting, and it sends me into a state I am not familiar with, one that produces a strong somatic response: Tight chest, heavy limbs, gaping heart, airy head. A bit drugged. You know the feeling, it is one that I imagine might resemble the sensation of holding an infant to whom you’ve just given birth, but as my wokeness necessitates abstinence from indulging my insatiable narcissistic desire to proliferate my genealogical line…

… this is probably the closest I’ll ever come to that feeling. Woke.

We are in the lemur enclosure, which, if you haven’t been, is basically a kids playground on steroids, full of Madagascan ring-tailed lemurs leaping, and climbing out and hanging out with each other, and just waiting for their moment to be photographed by a patron and loaded into the lemur meme generator. A zookeeper grabs a microphone and commences the lemur presentation, where fun facts about lemurs are blasted over the loudspeakers, and key members of the lemur community are given mention.

She is standing in front of me, taking in all of the fun facts that there are about lemurs, and she leans her weight into me, pressing her back against my thighs and her head against my belly. The zookeeper’s voice becomes a record being spun in the wrong direction as it fades completely from my perception. The big body feeling rushes in, and I just dissolve. The next thing I’m conscious of is a throwback to my first teen-aged slow dance: “What do I do with my hands?!”

I try them on her shoulders but I am convinced that she can feel my dissolution-panic moment through my touch, and that’s not something I want to transmit into her body, now that she’s trusted me enough to lean on me. They feel awkward and clunky and distant; like I’ve been posed in a studio for a family photo. The most natural place to put them is on her chest, the place where calm connection happens, but I’m hesitant and I have to think it through. I have to make sure I get the placement right, that I’m touching her flat, seven-year-old chest in its exact centre. Because I am a sex worker, and she is a child, and because no matter how hard I work on my own internalised whorephobia, I can never fully purge my subconscious of the message that these things don’t go together, they can’t go together.

The distance between a sex work business and a school or childcare centre is legislated by the state. Sex workers routinely lose custody of their children in family courts. I can count the number of out sex worker parents I know on one hand. I steady my breath, adjust my hands, and find that space where calm connection happens.

The little sister is quite talented when it comes to drawing. Most parents think that their child is an excellent artist, and, I can assure you, almost all of them are not.

She is some kind of surrealist, carnivalesque, outsider-art savant, and her drawings create worlds we would want to be in, amongst bipedal dolphins in ballet slippers, and dogs who have wings secured to their midsections with a ribbon tied with a bow – like the glittery angel wings of a Mardi Gras Parade twink, but gayer because it’s a dog.

Or this buff, tanned sumo ninja with killer pecs and a red mohawk, who looks like he’s just got a membership to the gayest gym on Oxford Street who wears swords on his wrists and ankles, ready to cut off tiny rat balls… should they find themselves exposed.

Or this deeply queer critique of the institution marriage featuring a bearded dragon in a beanie, and a skull and crossbones t-shirt, who has stored his lollipop in his pocket for later, engaged in what appears to be an inter-species handfasting ceremony with an oversized tadpole with a five-o-clock shadow…

… in which “I do” is replaced with “CFOK”. I don’t know about you, but this definitely summarises my marriage politics.

Don’t we feel radical? Don’t we.

… and forced to urinate before me, while my cat and cross-dressing rabbit look on.

Look, maybe I’m just paranoid because I know what I am, and she doesn’t quite, and I’m told that my highest aspiration as a sex-working parent is to ensure that she never does. Truly.

I am scrambling to find an outfit for my first time marching in the Mardi Gras Parade with Scarlet Alliance, The National Sex Workers’ Association. My costume options are scattered across my partner’s bed. It’s a kid weekend, which makes all of this extra difficult because in the rush it’s hard to make sure that all of my sex worker pride accoutrements – my “Blow jobs are real jobs” t-shirt, and my collection of badges with sex worker political slogans – are out of the children’s sight.

One of the accessories I’m considering is a red paper fan with the words “Whore Pride” written in black texta with sparkly gold accents. The elder child comes into the room and absentmindedly picks up the fan, unfolding and inspecting it. If I draw attention to the situation, it will stick out in her memory. If I play it cool, she’ll probably never think of it again. The word “whore” is not in her lexicon… yet, and, hopefully, this is not the moment that will change.

She holds the fan up behind her head and proclaims herself to be a peacock, strutting around the room. We wait for our moment to shift her attention to something else – LEGO, something – so that we can close out our little brush with danger.

But, admittedly, I relish the image of her proclaiming this whore pride. I wonder whether that pride – in my work and the work of so many other parents, though so rarely visible to our families or communities – is something she’ll ever feel or express. You don’t have to be a whore to be proud of whores.

I wonder whether the queer community she’s being raised in, one where having two or three or four mums is pretty normal; where our youngest is shocked to discover that there’s no Aboriginal flag emoji; where “they” pronouns are an inclusion, not an afterthought; where they learn about the right to seek asylum in year four; – Inner West primary schools – whether that queer community will become far more intentional and explicit in extending its sense of justice to sex workers. Whether she will maybe even meet some other kids whose parents are sex workers so that she has people with whom to share the pain of stigma – a stigma that I will not see end in my lifetime.

She wants to march in the parade next year. She wants those wings made of loose, billowy fabric that you open by extending your arms. I allow myself to imagine us marching with Rainbow Families, or some other utopian glittergutterqueer family group full of kids just like her, and I imagine her excited and awestruck, and part of a history she can slowly uncover. I imagine the float being followed by Scarlet Alliance in the parade order, allowing these two pieces of me to coexist with pride, and I wonder if we, as a community, will ever do the work that would support me to be able to allow my step-children to someday know who I am.