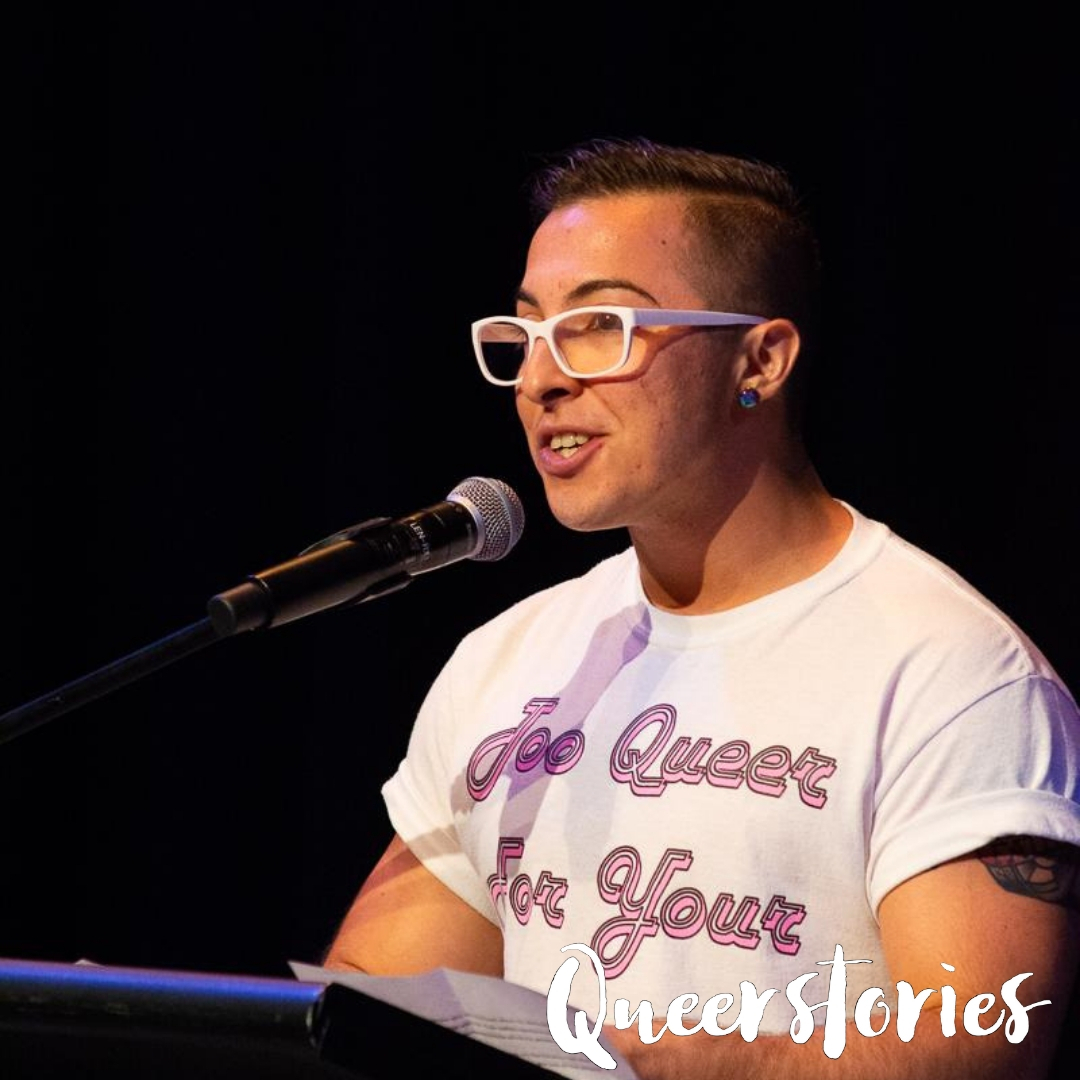 Dibs Barisic Sprem is an avid queer rights enthusiast. They volunteered for Wear It Purple, ACON and the Pinnacle Foundation, where Dibs is also alumni, and they work as a personal trainer. They performed this story at Queerstories Western Sydney at Riverside Theatres Parramatta in February 2019.

“I have a vagina,” is what I tell people who are confused about my obviously dykey looking girlfriend being in a relationship with me. Their baffled reactions bring me such joy because as it turns out, my kink is confusing people about my gender and sexuality.

I’m non-binary and since I started physically transitioning, my flamboyance has been intensified. So much so that just last month I dressed in drag, and took on the persona of Ivana Humpalot, to host a wake of all things. A beautiful fellow Westie unicorn named Shazza passed away because of that bastard called cancer. I came to know her through other Westie gays and was looking forward to growing our support network of friends close to home.

Because she knew her time on earth could end at any moment, she expressed exactly what she wanted to happen after her passing. A drag queen hosting a piss-up at a burger bar in Surry Hills was at her request. When no professionals were available at such short notice, I took it as my duty to fulfil her wish, and, no, I haven’t been Ivana Humpalot before but I felt as though my campness could handle it.

I borrowed heals off my sister, a dress from my girlfriend, and dug up a trashy blonde wig. Because I have range, I then pressed play on Pony by Genuwine and gave a grieving mother the most gender-bending stripper lap dance that Magic Dibs has ever given.

Depending on what I’m wearing, who I’m with, and how I’m acting at any given time, I can be read as a straight man, a gay twink, a bisexual boy or a really butch lesbian. Some people assume that I’m a trans woman when I wear femme clothing or lipstick, and sometimes it’s frustrating that nobody considers that I could be non-binary, but other times I play to what they read me as to avoid an awkward correction.

For two years in a row now, while I’ve been wearing a leotard or g-string, I’ve had cis gay men tell me, “Honey, that is best tuck I’ve ever seen. How do you do it?” On one of those occasions, I even had my top surgery scars out on-show, and the dots weren’t joining for the poor guy.

Being transgender in the Bible Belt of Sydney has meant that I feel like I have to lie about who I am to be taken seriously, or to avoid very awkward conversations. Whether I am talking to workmates, clients, or my local health practitioner, I feel like my identity as a non-binary person is seen as optional for people to acknowledge. That’s not to say they don’t want to support my trans identity but sometimes they go a little bit too far in the way of support.

If I had a dollar for every time I was called Brother’ or Good Man, I would be able to take out a mortgage on some smashed avocado. I’m proud of them for being pro-trans, so I don’t correct them, but being called a man can, at times, feel as inaccurate as being called a lady.

One thing that is for me, both frightening and fun is just when you think you’re out to any and all relevant people in your life, someone from your past reappears that takes you through yet another awkward phone call. When I was a little girl… I never get tired of saying that… I had braces. When they were removed, I had a permanent retainer put in to help keep my teeth in place when I inevitably wouldn’t wear the sexy plastic retainer I was given, whilst having slumber parties with my best friend. Like 99% of other lesbians, I fell in love with a straight girl and we secretly started fucking.

That turned out to be some toxic shit, but I digress.

One day when I was a couple of years into my physical transition, my retainer became loose after biting into a deliciously rock hard piece of pane di casa. I thought to myself, “Not a problem. I can get that fixed at the orthodontist.” Then it dawned on me that I would have to call and give my old name so they knew who I was.

When the appointment came I was feeling anxious, but all that was said by the receptionist was, “A lot has changed since we last saw you. Take a seat.”

Teeth are a very easy body part to have worked on and not have the staff awkwardly derail the conversation, but I have other body parts that need attention that are very hard for most people to ignore. A couple of years ago, I decided to get laser treatment for my privates. I didn’t like what testosterone was doing to my soft, mostly hairless body, and I still don’t to this day. I wanted to be silky smooth. I wanted to be able to get naked with someone in the dark and have them think, just for a moment, that they were in the presence of some sort of land dolphin.

So I made an appointment at the laser clinic and just asked for a Brazilian and underarms. When I filled out the paperwork, I left title and gender blank, as I always do, and I took my seat.

I felt as though the 15 minutes that I just spent nervous pooping were all for nothing. It’s not the thought of the pain that made me nervous, nor the general awkwardness of some stranger seeing me nude. It was more the fear of the unknown. What does one do in this situation? Tell the receptionist that I have a cunt, or just get one’s vulva out in front of the unwitting technician?

This is the sort of issue that I didn’t consider when researching the effects of hormone replacement therapy. No one lists, “Possible public humiliation at the laser hair removal clinic,” as a side effect. I just wanted a hair-free, carefree, fun factory.

Thoughts of embarrassing experiences, at similar clinics, told by my friends, swirled around in my head. Would the technician laugh? Would she refuse me service? Or would she leave the room without warning and invite all of the other staff members to have a giggle? I sat in the waiting room and messaged my bestie for reassurance. All she had to say was, “Why don’t you leave a patch at the top? Little triangle. Maybe a love heart?”

One of the technicians appeared at the edge of the counter and walked me to the treatment room.

She told me, “Take off your shirt and I’ll be right back.” Code red. I still hadn’t said that I have a vagina. “Do I say something? Do I wait ‘til I take my clothes off?” A male Brazilian is more expensive, and I don’t want to be charged for the balls that I don’t have.“

I laid down on the treatment table and came back to the room, and she started on my armpits. It seemed like her professionalism would be enough to see me through and I began to relax, until she said, “What are your scars from?”

I told her, “I had a double mastectomy. I’m trans.”

“Oh, okay. I have a friend who is the opposite. So she had hers put on.”

I lifted my other arm up while she worked on that side, questioning me about top surgery. I wondered if she felt awkward at all because I sure did. She directed me to pull down my underwear and there, with big bright lights pointed at my groin, I braced for a reaction. She doesn’t even flinch.

Of course not! She sees a hundred cunts every day! I can’t be the only trans customer either. She’s probably seen cis women with clits bigger than mine. The relief washed over me, and at least I could rely on professionalism. Her curiosity seemed to be satisfied until she dropped this gem: “So are you going to go the full change?”

I would have loved to have given her a ranty education sesh about how she wasn’t entitled to know the ins and outs of my ins and outs, but I put on my patient teacher voice and took her through phalloplasty 101. Although confusing people is my kink, oftentimes it leaves me vulnerable to invasive questions that are tiring to answer, especially when they could easily educate themselves by having a quick YouTube research session. But, every question answered makes me feel like I’m making a difference, and like I’m getting closer to becoming the role model I wish I had.