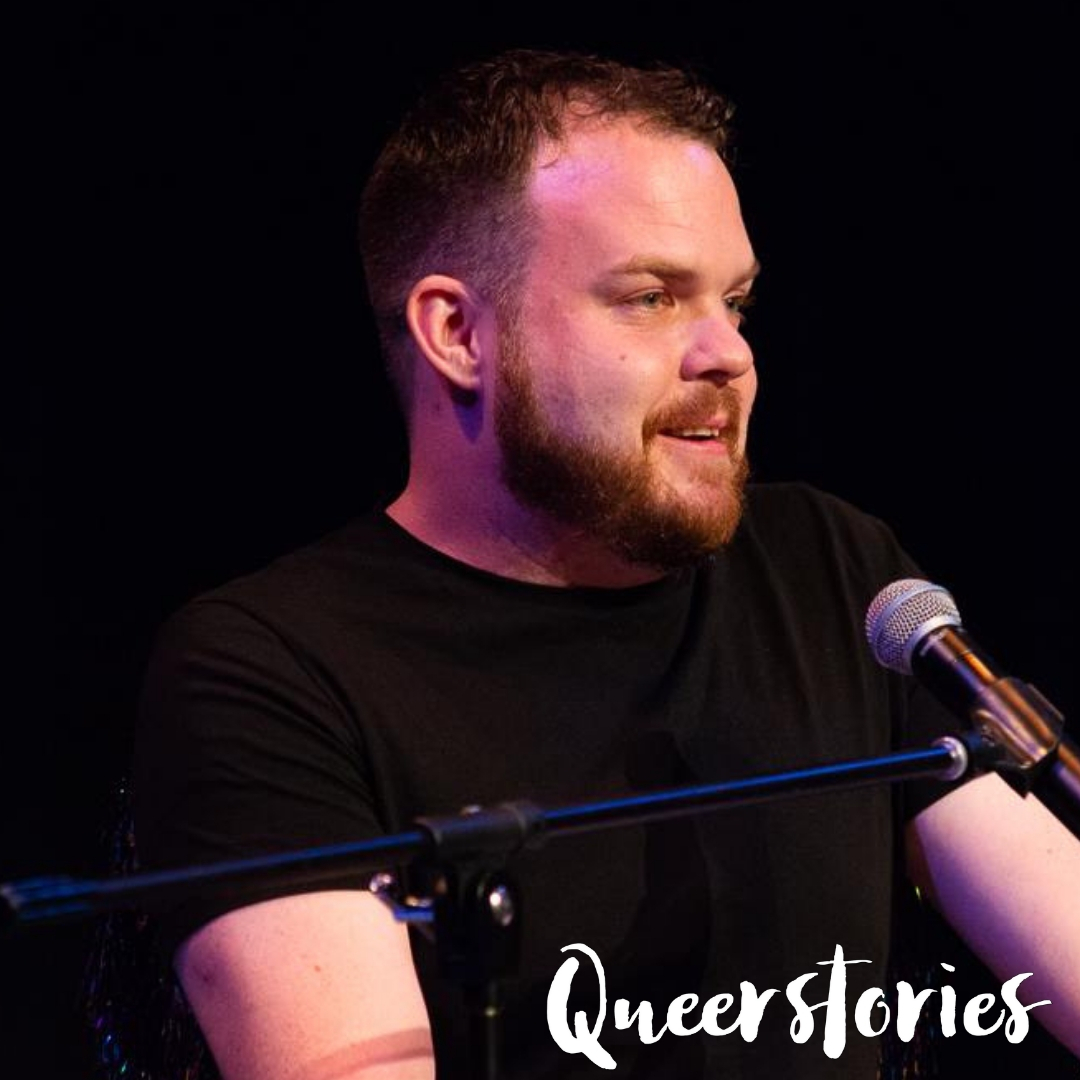 Brandon Bear was born in Penang, Malaysia, but moved to Western Sydney as a nine-month-old baby. After growing up and spreading his wings, he began a career working with marginalised community members, including managing a sexual health project for homeless and at-risk young people and managing a mental health storytelling program. Unable to enjoy spare time, he also began volunteering with Sydney Gay and Lesbian Mardi Gras and Camp Goodtime, a camp for HIV+ young people from across Australia and New Zealand.

Brandon has recently stepped down from five years on the board of Mardi Gras and continues to attend Camp Goodtime while struggling through the last year of a Bachelor of Arts and working as the Manager of Policy, Strategy and Research at ACON. Brandon performed this story at Queerstories Western Sydney in February 2019.

I have a small preface about this. I’m going to break the fourth wall momentarily before I start. Maeve does give instructions to storytellers – it’s very helpful for us – and one of them is to talk about the stories that you always want to tell but never get the chance to. I’m an open book, I tell lots of very embarrassing stories about myself but this is a story about my dad, which is a story that I don’t tell a lot. In fact, I don’t tell a lot of stories about my family at all. And, it’s a little bit meta because in this story there is another story about my dad, and I’m not sure how true this story is. My parents are divorced, and so you hear stories about one parent from the other and you’re never quite sure if they’re true or if they’re just the product of a very bitter process of breaking up.

The story goes that my dad was incredibly proud of a fact, and that fact was that he resigned from the Air Force the day that they let fags start serving. I did some research on Wikipedia about this. The timeline doesn’t add up, so maybe it is just a bitterness thing. But my dad also tells the story; well, he did when I was young.

I have such fond memories of travelling each week from my home in Merrylands, where I lived with my mum, to the Air Force base at Richmond where my dad was stationed and lived. The drive was long, and once you got there you had to wait in a tiny car park for my dad to come out and pick me up because my mum was not an Air Force person.

Seeing my dad appear though, every Friday afternoon, in his uniform, was one of the proudest things that I could possibly think of. I would go and spend two nights in a tiny two-room accommodation on base, which was actually a pretty fun place to grow up. They had a waterpark there with a mushroom waterslide, which was a lot of fun. I ate in the mess hall, I was amazed by the planes that constantly landed. There was a lot of incredible experiences, and these probably explained my predilection for a man in uniform as I grew up.

That predilection is affirmed by my search history and Tumblr following.

As I grew older, however, and learned some things about myself, that story about my father, the image that was portrayed of him, and our places in what was a very straight world became increasingly uncomfortable for me.

I distinctly remember driving through the city one day with my dad and a friend of his, and there was a billboard along the side of Oxford Street for Les Miserables. “Oh!” they laughed. “The dykes are back, and they’re unhappy!” This is not a very good joke, and I’ve learned that it needs explaining. They thought it was funny because Les Miserables is spelt like “Lez Miserables.” Maeve just got the joke. She’s read this story.

As you can see, it’s not a very good joke. Jokes that need explaining are not good, but, “the dykes are back, and they’re unhappy,” is the worst joke about musicals ever, and I’m including Cats in that list of jokes.

As a result of all this, the idea of telling my father that I was a homosexual… Well, you know, telling him anything about that side of my life was a very intimidating obstacle for me growing up.

Luckily for me, as fate would have it, the universe would take care of that for me. My first proper boyfriend, I obtained through a Shakespearian comedy of errors that involves secret letter dropping, mistaken identities, and a shared bus route from Quakers Hill Station to our homes. But, this is another story that I’m hoping I get invited back to tell later.

For a good amount of time, our relationship was entirely based on the duration of the transit from Seven Hills Station to Quakers Hill Station, and from Quakers Hill Station to my house, and then it ended. However, one afternoon, Michael, who was a more experienced lover than I was – to say the least – found out that I often had the house to myself of an afternoon. It was information that subconsciously perhaps kept from him.

You have to understand… and those of you who know me now might find this hard to believe, but … I was a very innocent young man. I had barely moved away from the bowl cut of my nerdy primary school youth, and I was yet to start shaving; I still avoid that.

My key thrills at the time were still the Target catalogue featuring friendly men in their 30s wearing affordable, comfortable underwear.

My search history now will affirm that I still love a 30-year-old man with a dad bod and an affordable boxer-brief.

Anyway, Michael came over, and I discovered what happens when two hormonally charged young men do when they are together, and when my more experienced lover suggested that perhaps we should go into the computer room and use the webcam on our home computer to… I don’t know, experience better what was going on, a thrill ran through my adolescent body, a thrill, which negated the fact that my father was very technologically adept and did some job that involved computers that I did not understand at the time.

Anyway, look, the rush of adrenaline faded quickly, as did the relationship. Michael and I did not last. He was merely a friend soon after, after personally dropping off a seven-page letter that broke up with me in no uncertain terms, and included what retrospectively is a very, very, very bad poem.

It was in fact not until weeks later, on the day of my 15th birthday party, which was being held at the All You Can Eat Works Pizza Hut Works at Kings Langley – for those of you who are following the Western suburbs connection, it continues – that I gave the moment another thought. I was sitting in my room innocently reading a Paul Jennings book, as you do when you’re late to develop, and my father walked in and said to me, “Brandon, if you ever use the webcam for something like that again… “

The realisation cracked over me like a thunderbolt and we both stood looking at each other for a very long moment, in a paternal silence that I am sure he never expected he would have. We never really spoke about that incident, and I am certainly not going to tell him that this podcast exists if it comes out, and I only thought about that yesterday. I’m sure it’s not something that my dad wants to listen to on his commute to work.

We never spoke about it but the ramifications were huge. It is sometimes hard and sometimes difficult to deny that you have a gay child when my father came home and I had torn up three long-stemmed roses and written the word “James” and torn that up on the floor as well. My father was quick to ignore that. But, the early hints now were not so easy to ignore that my dad had seen the truth in grainy 720 DPI resolution.

I think myself lucky that in our house we used PCs and not Macs because otherwise my dad might have had to witness that with a fun Andy Warhol filter, or perhaps in a kaleidoscope of shit that your dad does not want to see.

We never spoke about it, but it did change my dad. When trying to find a story interesting enough to tell on stage, I searched back through my online Livejournal. If you had one of these, do not read it again. It’s a terrible idea.

The levels of angst with which I publicly expressed my adolescence actually made me feel more ashamed than when my dad walked into my room and asked about going on the webcam. I found, though, a record from 2004 in which I ridiculed my father for texting me and asking if I had a “special friend.” I had not allowed my dad the time and space that I had taken and forged through countless hours squirrelling through support websites and chatting to strangers in chat rooms, with dubious intentions. I had not allowed my dad the space to deal with what I had been dealing with for a long time.

Looking back on that message, I am incredibly proud of my 2004 dad. I am proud of the support that he gave me, and how he changed himself for me because of the love he had for me.

I am not particularly close with my family. The last time I saw my father was a number of years ago, probably nearly a decade, at his home in Darwin, which explains why I do not see him very much. It was for a Christmas lunch and he guests over. They were drinking and chatting, and one of them went to make a joke. And it was as bad as the Les Miserables joke: “What do you call two gay guys… “ Or, “Two guys in leather pants walk into a bar… “ Or, “Elton John… “ this or that. I’m sure the joke would have been as unoriginal and trite as my earlier one about the musical Cats. But I’ll never know because my dad slammed his hand down on the table, interrupted the joke and he told the guest that he wasn’t going to sit and listen to homophobic jokes like that at his table.

I think I might cry. I was worried about crying.

Look, the rest of that Christmas was a disaster. My step-mum was rushed to the emergency room, and all the presents caught fire under the Christmas tree, which is not a joke.

Again, that’s another story, but I will always remember that Christmas as one of my favourites.

My dad will always be an older straight white man, who grew up in the military and who loves what he loves. And he’ll always potentially wrestle with a history of being homophobic in front of his son, who turned out to be gay, but he’ll also always loves me.