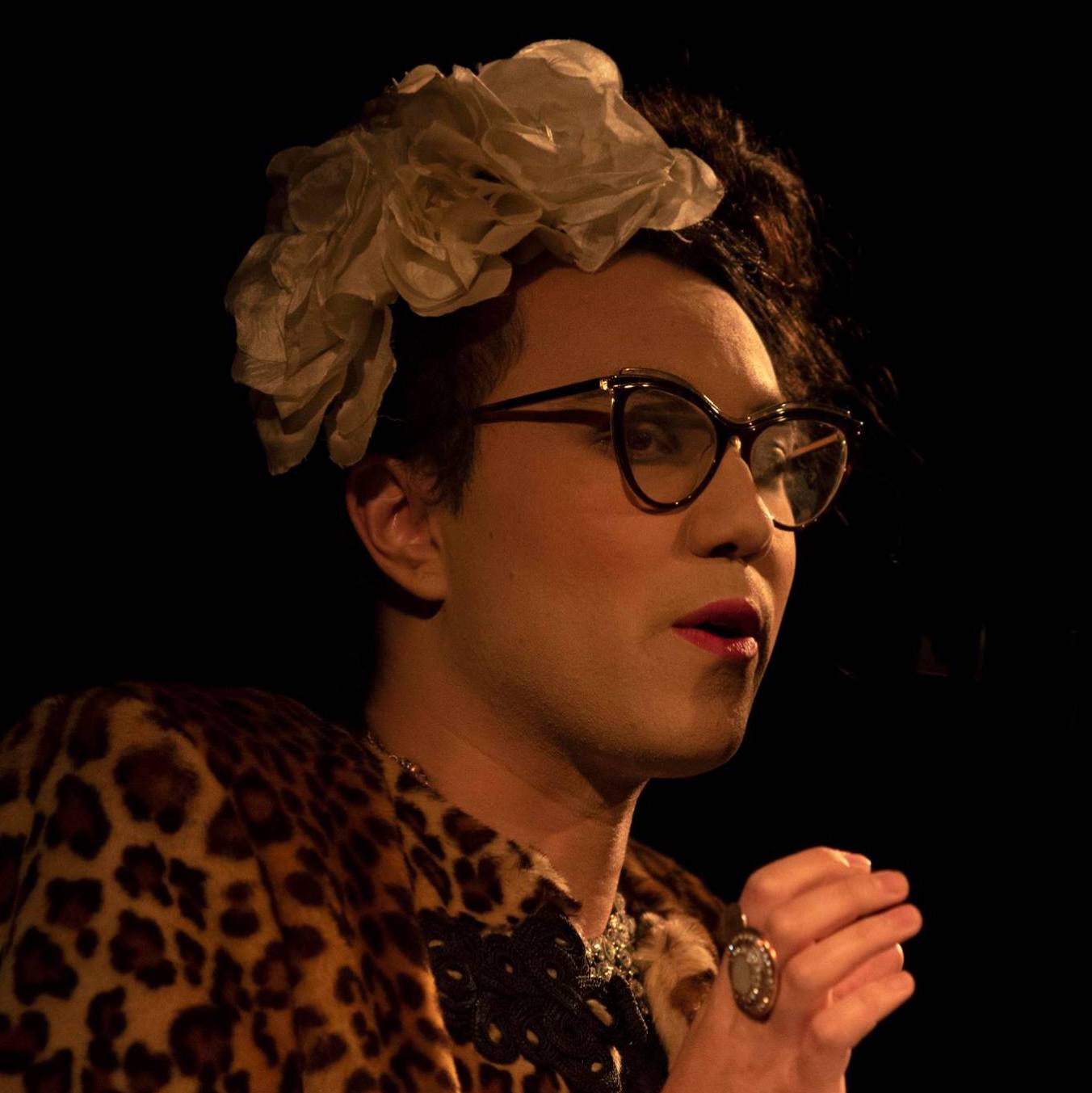 Hi. I’m Maeve Marsden and welcome to Queerstories – the podcast for the LGBTQI+ storytelling night I host and programme. Queerstories events happen regularly in Sydney, Brisbane and Melbourne, and I’m also now hosting them in regional towns. If you enjoy these stories, please rate, review and subscribe to the podcast, and consider buying a copy of the Queerstories book: A collection of 26 of the stories edited by me and published by Hachette. I’m really proud of this collection and I hope you enjoy it too. Mama Alto is a gender transcendent diva, cabaret artiste, jazz singer and community activist. Mama Alto was the 2017 Artist of the Year at the GLOBE LGBTI Awards, and her story is featured in the Queerstories book. She performed at Queerstories at the Sydney Opera House and in Melbourne.

The last time I saw Aretha, she was resplendent, she was glowing. Her voice was in full-throated melismatic glory. Her hair in glossy tight curls and her energy like an unstoppable wave. It was no YouTube clip, no televised appearance, no viral video on my Facebook feed, although I obsessively absorbed the Queen of Soul through these media, both before and after her recent passing. I’m speaking now of the last time I saw her in person.

The last time I saw Aretha, it was a ridiculous and bedraggled journey for me to even make it in the door. Famously afraid of aeroplane flights, she was performing only within easy driving range of her home outside of Detroit. I was in New York, and when I found out that Aretha Franklin, a personal idol of mine and a global icon, would be performing whilst I was in the States, I just had to see her. I had never even heard of the town that she would be performing in. But, no matter. I decided, come hell or high water, I had to be there.

The last time I saw Aretha, the crowd of 5,000 could not wait for her ascent to the stage. The energy in the room was electric. Before the concert even began, I had already cried from the sheer exhilaration of being within such a charged and immense collective experience. The last time I saw Aretha, it took a flight from New York to Detroit, a second flight from Detroit to Kalamazoo, a place I thought only existed in Dr Seusse poems.

And then a long drive from Kalamazoo to Battle Creek, before heading out of Battle Creek to an even smaller, even further away no-named town that was actually just a glorified intersection, which housed only a casino, a petrol station and a seedy motel. As I had spent most of my money on this trip, it’s no surprise to tell you that I was staying in the seedy motel, and not in the plush casino hotel suites.

The last time I saw Aretha, she was magnificent. She demonstrated without question why she is the royalty that she is. Hearing her voice in person is some of the most alive that I have ever felt. I held my then-boyfriend’s hand. He had been very nervous about being very white in a very black crowd, and about being very queer in a very straight town. I had been very nervous about this too. But in the presence of the Queen, and with her voice ringing in my ears, I felt no fear; only power, and beauty and love.

The last time I saw Aretha, whispers rustled through the crowd. I skipped ahead a paragraph – rewind.

The last time I saw Aretha, she was all I could think about when I boarded the plane, when I boarded the second plane, when we waited at the car hire desk, so I almost didn’t notice the look of cruel derision and utter disgust that the older gentleman behind the desk gave us. Whilst his speaking voice, which emanated from beneath the moustache of a distinguished and dignified walrus, boomed with incongruent hospitality. “Welcome to Kalamazoo, boys.” He paused. “Ladies, or whatever.”

The last time I saw Aretha, whispers rustled through the crowd like rippling waves every time it seemed as though she might mention Whitney, who we had only recently lost. The enthusiastic white lady behind me told anyone who would listen…

The soul sisters sitting around her rolled their eyes, and every time gestured to me with shrugs, “Would you get a load of this lady?”

The last time I saw Aretha, I became so painfully aware of how difficult it is to move through the world as a queer, brown lady. Neither I nor my then-boyfriend could drive, and even if we could, we certainly didn’t have the foresight to apply for international driving licenses. We’d scraped together enough money to book a car and a driver to get us from Kalamazoo to Battle Creek, and then to the small intersection. We had also booked it to get us back again the next morning. The man with the walrus moustache was not happy about this. “You booked a town car, gentlemen. I drive that town car.”

All the long drive, the enmity seethed off his very being. He resisted all attempts at politeness, at conversation, and frequently dropped in barbed cruelties. “We’re in Michigan to see Aretha Franklin,” I said, smiling. He looked us up and down slowly, grunted. “Figures.”

The lady at the desk of the seedy motel had the iciest smile you ever did see.

*Imitates higher-pitched Michigan accent* “The shuttle bus leaves to the casino every half-hour. It’s only a four-minute walk but the duck hunters are out this time of year, so y’all don’t want to be walking in the dark. Are y’all completely sure it’s meant to be a double bed and not two singles? I’m not judging y’all. We accept all types here.”

My then-boyfriend wanted to take a walk in the woods nearby to get away from these people. I reminded him about the duck hunters.

I pointed out how easy a mistake it would be for a duck hunter to accidentally shoot at an interracial queer couple in the woods outside of a no-name town, outside of Battle Creek, a long drive from Kalamazoo, a plane flight from Detroit, and another plane flight from New York. So we sat in our room with the door locked until we realised that with some jiggling, the door’s deadlocked actually popped open.

We barricaded the door with a chair. Half an hour later, sitting on the shuttle bus waiting for it to leave for the casino, where Aretha Franklin’s concert would be that night, we laughed at our own paranoia, until eight drunk fraternity bros pilled into the bus, snorting loudly, reeking of beer and vomit, and slinging homophobic slurs with every groggy breath in and out. We stopped laughing. We felt our paranoia might be justified, and we sank into our chairs.

On the shuttle bus back from the casino, those same dude-bros spotted us. “You better watch out if we find out what room you’re in,” one slurred drunkenly, before falling to the curb and vomiting out the front of the motel. The duck hunters were sitting in the motel’s bar and grill when my then-boyfriend and I went in for a snack before bed. They were polishing guns. We ordered our fries to go to take back to our room. The bartender loudly announced, “You must be the homosexuals that Lindy mentioned!” Lindy the front desk lady appeared with our fries.

*Imitates Lindy* “Are y’all sure you want it to go?” she said, her eyes glinting with hospitality and malice. The alpha male duck hunter spat on his gun and continued to polish it. “Y’all oughta sit with us, we’re very friendly… ladies.”

We pushed all the furniture against the door that night and didn’t sleep.

The last time I saw Aretha, she embodied on stage every single little thing that I remembered feeling the very first time I held her album, Aretha’s Gold, in my tiny childhood hands, the first album I ever bought with money my grandmother had given me to buy a chapter book for school.

Aretha embodied every inch of sassy confidence, of divine majesty, of spine-tingling aura that I had seen and heard, and loved and worshipped ever since I first discovered her voice. She was, that night, every ounce of the lessons she had taught me about how to be a proud, fearless, brown lady in this world, about how to be the diva you needed when you were young, about how to suffer no fools, how to demand what you’re worth, and how to spread love and joy and power, and look fierce and fabulous whilst doing it.

In the morning, the hire car did not pull up. A battered old yellow cab did with a confused white lady with frizzy hair at the wheel. She was talking to Lindy, my favourite front desk lady. “I mean, it says here I’m taking these folk to Kalamazoo Airport, but you know darn well they usually send the town car with the boss to do jobs like th-… ” The lady with the frizzy hair caught sight of us, and her confused face softened. “Oh, honey. Get in the cab. Let’s go.”

She turned on a battered old CD of diva hits in the car and she sang along to every single one. She had a big voice, full, but weathered and cracked. “I love to sing,” she told us, smiling broadly. “I’m guessing you two were in town for Aretha. I love Aretha. I couldn’t believe she was coming here to us.” We still hadn’t said a word. She looked at us with concern and she spoke softly. “What’s up, honey-buns?” I looked at my then-boyfriend who nodded cautiously, so I asked, “Why are you being so nice to us?” She teared up a little. “I pulled up the car, wondering why they’d sent me in this old beat-up cab to drive you all this way, and then I caught the sight of you interracial homosexuals. Honey, this town must have been hell for you.”

She spoke openly and warmly for the rest of the car trip. On long stretches of highway, when there wasn’t much steering to do, I held her hand, and she told us the story of how her boss had sent her – the no-name town’s only but now reformed sex worker – to drive filthy sinners back to the airport. “They judge me, they judge you, and we’re in this car getting the hell out of here, but God’s on our side.” She winked.

The last time I saw Aretha, when she finally mentioned Whitney, the crowd went wild. Predictably, the overenthusiastic white lady behind us said once more…

The soul sisters laughed and clapped her on the back. By this stage, we were all beyond her and us, and us and them, in one of the only moments of my life that I have truly felt that way in a crowd.

Aretha the Queer gestured for her pianist to step aside. She sat down at the piano, shedding her mink coat onto the floor as she did, in one seamless, elegant movement. She sighed into the microphone, as her agile fingers rift up and down on a smooth arpeggio. She began to speak.

Her voice trailed away but the piano arpeggios grew stronger, and then ever so gently, the Queen of Soul began to sing.

And I will always love you, you.