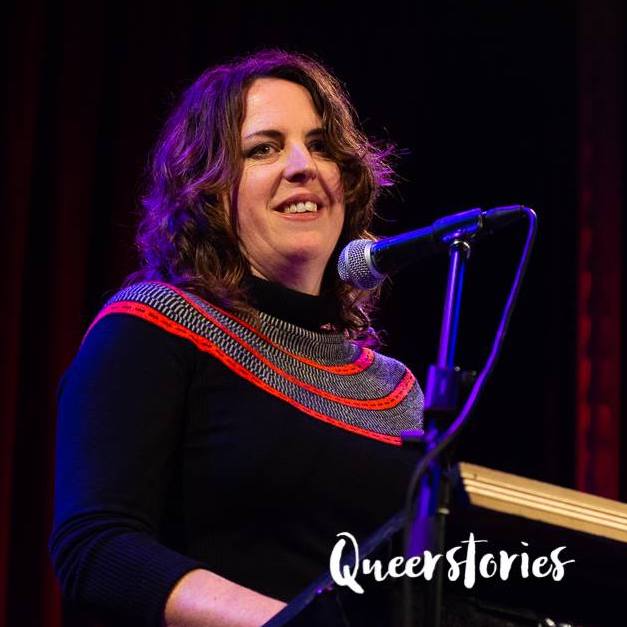 Coming up: A story that I really, really loved. In the ‘90s, Groovii Biscuit contributed to many a queer gathering; Club Bent and the Alternative Mardi Gras parties to name a few. Groovii was one of the original trio that birthed Club Kooky, and she continues to produce arts events and dance parties for the community. Look, I think you’ll really enjoy this story as much as I did. It’s a really interesting insight into a well-known organisation in Sydney.

I was watching Countdown with my family. It was the first time I ever saw Boy George. I remember sitting there with waves of arousal happening, thinking, “Oh, my God. I hope this doesn’t mean I’m a lesbian.” Even though it was a great relief when I discovered he was actually boy, this moment was a catalyst, and it was for my dogged pursuit of a hardcore queer lifestyle that I hold dear to this day and onwards.

In the ‘80s, there was no internet, there was no Google, there was no hardcore queer lifestyle sections in the local library, so I just had to gather information wherever I could. I learned from somewhere that people living a queer lifestyle at the time were going up to Oxford Street and getting something called amyl from a sex shop… and then they were going onto a dance floor at the Exchange Hotel and sniffing it. I was only 14 years old so…

I wasn’t allowed out at night, but I was allowed to go shopping in town on Saturdays, so one morning I took myself off to Oxford Street, looking for action. Eventually, I felt brave enough to go up to the Toolshed and ask for the amyl. The bored cashier looked at me, and then reached into the bar fridge behind the counter and handed me the bottle. A few minutes later, I was walking down Oxford Street, bottle in hand, feeling like an absolute queer legend. School suspension number one: Dealing amyl on the school premises.

Thank you. I know. I didn’t even get any money, I was just sharing.

The headmistress declared that this drug was so unknown that she was sending doctors around to all of our houses. I can still remember my Dad driving home in the car with me, banging the steering wheel going, “I’ve never been into a sex shop. What where you doing in a sex shop? Promise me you’ll never ever go into a sex shop again.”

Suspension number two: My research indicated that girls were more likely to let me touch them if I shaved my hair off and dyed it blonde. My school said I couldn’t return unless I wore a wig to school every day. I chose a brown bob. But around this time, I thought I’d better prepare for a strategy to guard against some more attacks on my fledgling queer lifestyle, and that was when I discovered Twenty10, the only LGBTQI live-in youth refuge that was in the world at the time for LGBTQI kids. Yeah.

Then suspension number three arrived. The headmistress had received a call from a concerned parent whose Year Seven daughter had come home crying because she had seen me kissing girls in my uniform at the station. During that drive home, my Dad was silent, Mum was crying, and I slowly pulled off my wig…

I knew it was over, so I rang Twenty10 and luckily they had a room if I could move in that night. So it was my new home, living with five queer siblings in a big orange terrace house on Glebe Point Road, next door to an ex-crims halfway house.

I learnt more Madonna lyrics than I ever wanted to know, I learned what ACT UP and Queer Nation stood for, learned how to do my t-shirt sleeves like James Dean. One housemate even taught me to inject her tits in her nightly transitioning ritual. And, my girlfriend, her and I would draw the progress of our pubescent tit on her bedroom wall in pencil each week.

All of these activities were overseen by workers six days a week. They only slept over on Friday and Saturday nights, so we had most evenings on our own. There were house rules, but like all good queer rules, they were very fluid. One was no sex in the house or with other residents. Luckily, my girlfriend’s bedroom was right next door to mine, so that when we heard the workers put the key in the door downstairs, I could climb out of the window quickly, naked, along the awning facing Glebe Point Road, and get back into my room and nobody knew. Good idea.

Another rule, that there was to be no drugs in the house. I still remember learning about Rohypnol looks like by seeing two residents in slow motion making peanut butter toast, and then just dropping it all down their shirts. And you could only live there if you identified as LGBTQI. That might sound obvious, but there weren’t very many youth refuges in Sydney, so a lot of kids would come to try and get housing, pretend they were gay. We’d say to each other under our breath, “Do you think she’s gay?” “Nup, I don’t think she’s gay. I’m going to go and tell the worker.”

Sometimes, there was an instant connection between rezos and sometimes not. One I wasn’t sure about at first was this quiet, brooding type with curly red hair who would sit in the lounge room chain-smoking, silently watching the banter.

Then, one night he told me that he had a master key and invited me to break into the office with him. Apparently, on the day he’d moved in, he’d made a copy of the worker’s key without being detected. This was deeply impressive and it earned him the nickname Vigilanti. Breaking in soon became part of our daily routine. We’d read our file notes and check that the workers weren’t stealing any of the petty cash, or lying about us in the daybook. There would be some pretty shitty stomping around the house on those days. But using the office phone was about as naughty as it got.

My connection with Jeffrey was instant. He was the Twenty10 house alpha male. He was this sassy punk boy who had intelligent eyes and an acid tongue. I just loved sitting in his room with him and looking at his artwork, his books, and his clothes. At seventeen he seemed very worldly.

Jeffrey was adopted, and when his parents discovered that he was gay it was so bad he ran away at age twelve. He travelled down to Sydney from Brisbane and picked up a heroin habit while working on the wall in Darlinghurst. But by the time he was at Twenty10 he’d kicked heroin and he’d taken himself back to school.

Around that time, he decided to contact his mum after not speaking to her since he left home. She sent a package down and he opened it, and we were all standing around watching curiously. And inside were a pair of little boys twelve-year-old pants, like in her head his growth had frozen on the day he’d left home. He held them up against his body with the bottom of the pants coming to his knees. I watched as his signature confidence got shaky around the edges.

Soon, Jeffrey scored a really great housing commission down the road, leading the way again, and we would all regularly congregate there, hanging out and listening to music. And then a new rezo took his place in his Twenty10 room, and this one was a totally different breed – natural blonde hair, crispy clean white t-shirts, clean sneakers. Let’s call him Squeaky Queen.

He had been disowned by an extremely religious family and was struggling with the loss of his previous life. None of us could really relate to him very easily. We were repelled by how hard he was trying to be loved all the time. He irritated our street-smart need for no one.

One night Jeffrey came over and started pressuring Vigilanti for the office key, saying that he wanted to borrow some money from the petty cash and that he promised to pay it back. Two of his old junkie friends were standing around the door. And, for us, stealing from the office was a really big no-go zone, so we were all very uncomfortable about the whole scene.

Vigilanti was agitated for days afterwards, and he knew something wasn’t right. Jeffrey didn’t turn up to school and wasn’t answering his door. In the end, Vigilanti broke in and he was bent over the kitchen bench, dead with a needle in his arm. Everyone dropped everything and ran to the Twenty10 house. We couldn’t stop obsessing over what had happened, and why his body was positioned like that, and what was going to happen next.

His parents were called and they flew down. They were so grief-stricken and so estranged, and they just kept trying to connect with who Jeffrey was through all of us. Squeaky Queen quickly stepped into the role of comforting expert on all things Jeffrey. He spent the next few days trailing Jeffrey’s parents to the morgue, to dinner, to their hotel, building intimacy through his fictitious relationship with their dead son. This feeding off Jeffrey’s dissipating life force repulsed us, and it amplified our sense of helpless frustration. His parents took Jeffrey’s body away to a funeral in Queensland that none of us could afford to go to, but they did pay for Squeaky Queen to fly up to represent Jeffrey’s Sydney friends, and then we never saw Squeaky Queen again.

Twenty10 was the first place I learnt the art of queer loving, the complexity of cultural grief, and the rich alchemy of that combination. I feel very differently now about what happened after Jeffrey died. I am quite moved remembering the shameless way Jeffrey’s parents and Squeaky blindly fumbled towards each other in shame and self-loathing. It was clear from the getgo that Squeaky wasn’t ready to leave the nest. That wasn’t at all true for me. I physically ached for the freedom of my queer life.

But I hope they went on to adopt Squeaky and finish what they started with Jeffrey. And I hope they all supported each other to forgive themselves, and I hope they changed each other’s worlds. And I hope that I can continue to pump through my veins, my Twenty10 family’s feisty queer life force, as the drones circle us once again in our very Gay Sky.