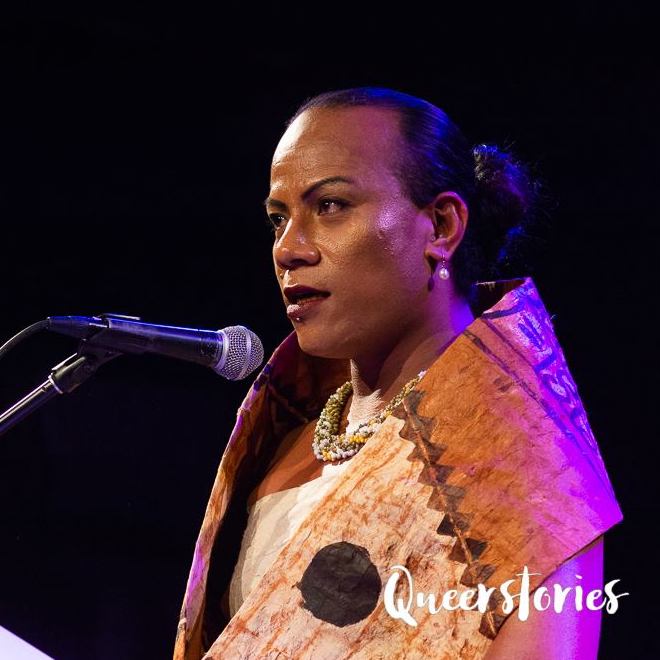 Epipola Taulafo is an entertainer, singer, dancer, and a member of the LGBTIQ group at the Asylum Seeker Centre. She is currently studying business management and is a former Miss Galaxy Queen from 2008 to 2009.

Malo e lelei, and greetings from the kingdom of Tonga, which is known as the friendly island in the Pacific Ocean.

Growing up in a little island where Christianity is very strong, cultures and tradition has to be a part of my everyday life, drown me in the river of being able to escape, and come up for who I want to be.  When I was in young age, my Mum used to dress me up in whatever clothes she got. Even if it’s for boys or girls, she still put it on me because that’s what she got. No one cares about it, but I grew up to like it more and more.

Every day when finished school, I came home and climbed on a big tree beside my house, and start singing those Tonga lullabies.

Tonga is the place of freedom and peace.

No one is homeless

Whether you are poor

Still, you can survive

Peace and love remain in Tonga.

I remember, one day my uncle came to my house while I am up on the tree singing. All of a sudden, he came up, yelled at me saying, “Get your ass down and stop singing like a girl. Try to sing as who you are as a boy.” Oh, my God. I stop singing straight away and came down from the tree, but inside me it build me with so much anger and hatred, and, to be honest, I hate that uncle of mine from that day up to now.

My mum has to take me to the main islands and get everything ready for high school. Leaving my family back in the island makes me feels homesick most of the time, but, on the other hand, I love to adapt to a modern world and learn new things. Not only that but make new friends and have good experience about being who I am. I was thinking that I will be going to study at a mixed student high school like boys and girls, but it was wrong. My uncle and my mum agreed to take me to a boy’s boarding school. Too bad. I was thinking that I will be hang around with girls and learn girly stuff. But now it’s more like they have put me in a priest convent, but inside me, I am a nun. Well, going to high school in boys boarding school makes me feel more in what I was expected. Shower together, sleep in shared bed and get naked together with boys. I felt my family thought I will be a straight boy when I finish high school, but it wasn’t.

They put me in a wrong place. That is my first experience of being interact sexually with a guy. In my seven years in high school, I have strongly experienced being like a lady among boys boarding school, and I will never forget that in my life.

After from high school, I tend to stay back in the main island, continue on with my diploma in Tourism Management, and look for a job to help out with my family of six sisters and six brothers. I am the second to the youngest in 13 children altogether.

My first job was a part-time hairdresser. This time, I started plucking my eyebrows, put on lip shine and lips stick, leave my hair to grow longer, still dress up in a man clothes in the daytime, and girls clothes in the night time when I went out clubbing. I also start drinking and smoking. I sometimes say to myself that I won’t go back to my island even though I miss my parents, but I am afraid of my father’s family, even my brothers. They will hit me and chase me away, as they don’t really like and accept me for who I am.

I remember, one day I finished work and I have to take the bus back home. And on my way home I stop by in town to do a little shopping. I was so shocked when I felt a punch from the back of my head, and I fell l down with my shopping beside the street. All I was heard, the word, “I will now beat you to death, as we are ashamed of you knowing we are family. And from now on, no more dress like that, no more walk like a girl, and put on girly stuff. Okay? Do you hear me, huh? When are you going to be a boy, huh?”

I end up bleeding and crying, calling for help, and soon a guy came and stopped the person from beating me. When I get up and try to see who was it, as I was a bit fainted, and saw that he is my oldest brother shouting at me and gone away. I was taken to the hospital and treated right away. The hatred was started to lay in my vein, even in my heart for my brothers, and the pain that I went through make me think of something that almost took my life.

I received some text message from some of my relatives from my mother’s side, asking to forgive my brother but I always refuse to. After I was healed, I went to the police and filed a complaint against my brother, and also to a lawyer to do a letter, and send it to my brother that he will be away from where I am, or like 100 kilometres away from me. I was as happy as I know that I am safe. One year later, I graduate with my diploma in Tourism Management. I start working as a teacher in one of the government institutes. Of course, they prefer me to dress up as a man but I refuse.

And they know that they will not win. They will not make me dress like a man. So they decided to ask me just for a contract for one year, and after this, my work was finished with them. During this time, there was a beauty pageant that runs once a year that is for the transgender women.  I decided to give it go.

I wanted to show the whole country, even the people that can watch it on television and see it in the newspapers, to know that this is me. I said to myself, “I think it’s enough to be hiding myself in this little box. I have to come out to show the whole country, and even the world, that I am proud to identify as a transgender woman.” I  registered for the Tongan Miss Galaxy Competition.

Of course, it’s about beauty, but it’s about confident, creative, talented, and being smart and educated. I asked some of my friends to help me out designing clothes, collecting materials and Tongan fabrics – like I’m wearing now – and putting together ideas.  We only had about a month to prepare and to get into the competition. I also had to go through a formal interview and get ready for a lot of categories. My favourites are talent and stage interview. I did mixed Polynesian dancing, which means putting together a medley of different Pacific Islands dances. Still, I prefer Tongan and Samoan, and I teach these dances to young Pacific Islanders every week here in Australia.

The Miss Galaxy competition runs for a whole week from Monday night to Thursday. Then, the crowning on Friday and float parade on Saturday. I became the first runner-up in 2008, 2009, and it’s because of the winner later disqualified, then I had that title for two months later.

I was happy, so happy.

The next day in the float parade, we demonstrate our costumes made out of anything with the theme HIV and AIDS prevention. My whole costume was made out of condoms, and this was a very happy experience in my life because I haven’t done that before. I haven’t dressed up and been live on television. And up until now, I still have the feeling that this is me. And that Miss Galaxy has brought me, not just walking in the city, but finding the pathway that I should be in the future.

It always reminds me that I should walk on and walk strong, even I’m away from home where I grew up. And despite everything that I have done here in this country, I will never forget all of my sisters back in my country who are struggling, and facing hardships and still hiding themselves. But not me. For me, right now at this moment, I still feel this is me, and this will always be me forever.