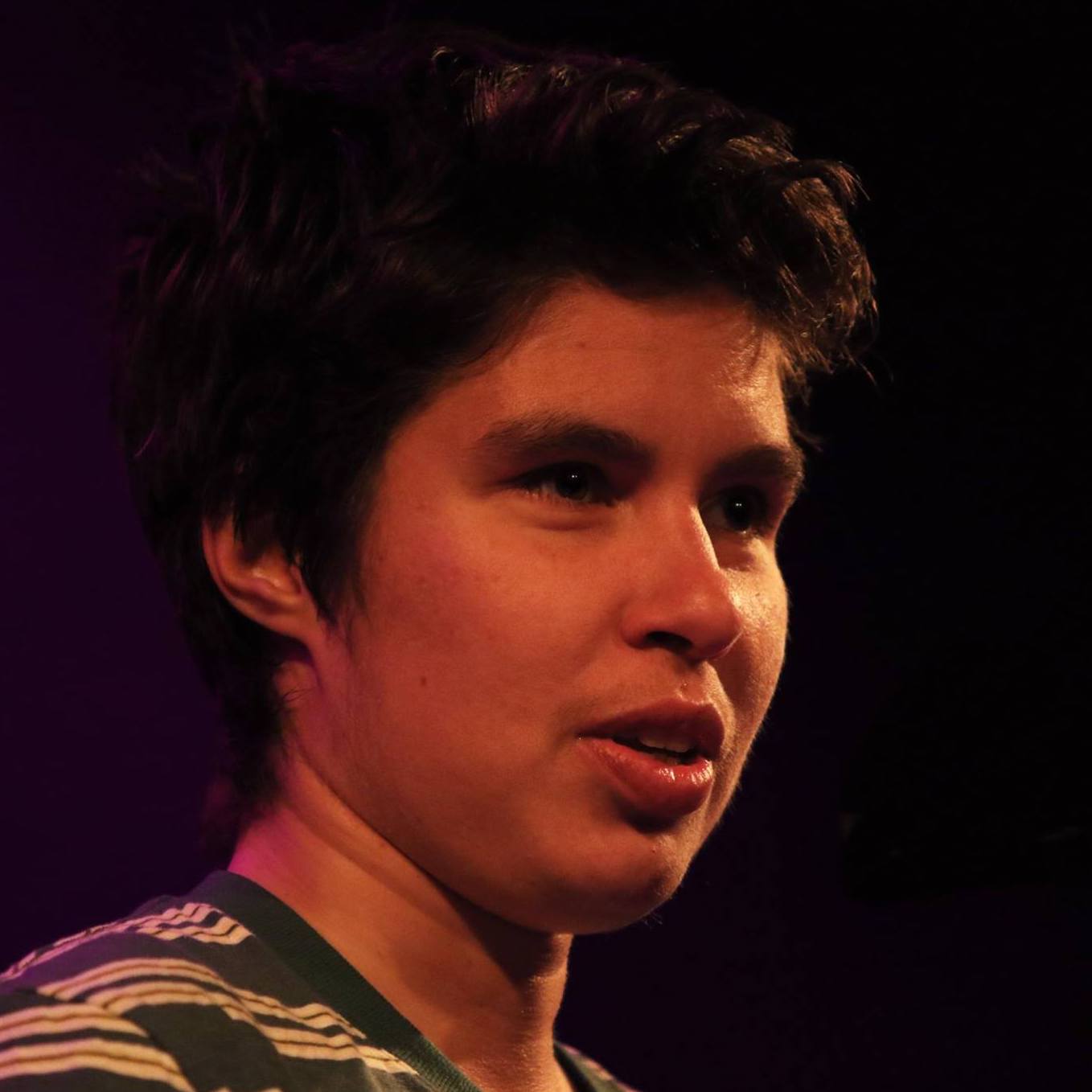 Ellen van Neerven is a writer of Mununjali Yugambeh and Dutch heritage. Her first book, Heat and Light was the recipient of the David Unaipon Award, the Dobbie Literary Award, and the NSW Premier’s Literary Awards Indigenous Writers Prize. Heat and Light was also shortlisted for The Stella Prize, the Queensland Literary Award for State Significance, and the Readings Prize. Ellen’s second book, a collection of poetry called Comfort Food, was shortlisted for the New South Wales… Look, there’s a lot of awards. All of her work has received a lot of awards. I’d been wanting Ellen to perform at Queerstories for ages, and I finally managed to book her for Melbourne in November 2018. Enjoy.

The first day that I moved here, I joined a football club. I had played on checking out a few local clubs but I only went to one. It was March and the start of the season was rapidly approaching, and I didn’t have the time to learn a new route. Brunswick Zebras was a short bike ride away from where I was living in Parkville – maybe fifteen minutes if I was confident – but at first, I would often miss the turn-off and get lost, and it would take me more like an hour.

Right from the start, I was drawn to the ground that we played on, which backs onto the Merri Creek. On a cold, misty night, it can be the most peaceful place in Brunswick.

So football’s always been a massive part of my life, something that keeps me steady. I used to spend hours, when I was growing up, in the backyard, sometimes with my dad, or my brother, or my dog. I spend probably eight hours a week watching games on TV, and probably more than that reading up on news sites and forums and playing fantasy football.

For me, it’s a strong antidote to a world that doesn’t always make sense. I know there’s a game I can watch. I know I’m playing on Sunday. And I can tell you it’s not fun trying to keep me from playing when I’m injured. But you know, this year, my second year in Naarm, and my second season with the Zebras, it hasn’t just been football itself that’s kept me steady, it’s been the team. I’ve been reflecting on what it means to be in a team and to have a team, and I do think now that everybody needs a team.

When I first moved here, there was, straightaway, people I thought I could be friends with but a lot of those didn’t work out in the way of sustaining contact. I still see those people sometimes and I like them very much, but it’s been the unexpected friendships that I’ve made that have shaped me and who I am in this city. None more unlikely than my football friend Corinne.

When I first met her, I didn’t think we had anything in common. She was loud, mile-a-minute Californian, always telling inappropriate jokes and slide-tackling opponents.

I was, in contrast, shy, unassuming and scared of contact on and off the field.

I can’t remember when Corinne first starting offering me lifts to and from training and games. I do know that I was a bit nervous sitting next to her for those fifteen minutes because I didn’t think I had anything interesting to say. I do know Corinne was offering to go a long way out of her way to drive me.

I’m not on her route, I’m a bit more north… No, this story is not going where you think it is.

She would be home way quicker if she wasn’t dropping me off. And the more I would insist I would grab the tram instead, the more she would offer. I also know that lifts are such a gift, particularly in Naarm’s four seasons of winter. It has been a slow burn friendship. In the beginning, I would just listen to Corinne talk about strange office politics at her work and what her boyfriend had cooked for dinner, without contributing, myself. But multiply fifteen minutes four times a week over a year, and, well, our teammates notice that we finished each other’s sentences.

We’d tease each other like siblings, and she knows what I’m thinking – it’s pretty scary. Corinne’s unexpected kindness is especially noticed when I’ve had a bad week. Now, we see each other outside of football sometimes. We go to the beach or grab a coffee, and we text the weird things that happen to us every day.

On the pitch, she is great to play with. She’s a fantastic defender with an eye for attack and I know she’s got my back. Relationships like this one have helped to offset the loneliness that I feel here, pretty strongly actually. It took me a while to admit that I was feeling lonely because I hadn’t ever really been lonely before, which was quite a luxury, I think. Back home, the place keeps me safe and I have hundreds of relatives all over the place that I can call on. And my best friends lived five minutes away. So, of course, it would make sense that living here would feel different. And, I feel like I have a lot of big questions that I haven’t answered.

I know a lot of people here now. And I get to know their personal geographies – how they, if they’re not Kulin mob – got here, through family, relationships, work, study – and why they stay. I’m always feeling like I’ve got one foot out the door back home. And as I always reflect and grow my understanding and appreciation of what it’s like to be on Wurundjeri Kulin Country, what it’s like to acknowledge and respect elders past, present and future, and I often do so with my football boots on the ground, studs digging into the turf, sometimes bringing mud back home that dries quickly into a layer on my skin until I wash it off.

The Zebras were recommended to me by a friend, as they are known as having this really friendly team that has a long social history. There’s even been a book about the team called The Mighty Bras. The current make-up of the team is total overachievers excelling in multiple disciplines, whether refugee advocacy or Indigenous health and wellbeing. Talking with Emily, who’s Wiradjuri from Central New Sout Wales, on that first night of training, was a major motivator to join the team.  This was a team that I could feel welcome in.

“You don’t need to drive me all the time,” I said to Corinne for the thousandth time, as she sped down Lygon Street. “I can make my own way to training. It’s okay.” And Corinne told me, “When I first moved here from California and I didn’t know anyone, someone did the same thing for me. And I will always remember it.”

They resemble a composite family – Aboriginal, Brazilian, Asian, European – and everyone legit loves each other and doesn’t seem to need time apart.

It hasn’t been my experience in the past.

So, I just need to give a little season wrap because we did pretty well this year. We started strongly, registering a few hard-fought wins before we had a tough match-up against the youthful Ringwood – fourth on the ladder – at 6:30 PM on a Friday night and a storm forecasted. So in Queensland, that game would have been called off. It’s not because we’re soft, it’s just dangerous, you know?

I was thinking of my backup plans, looking at the radar and stuff. But in Victoria, games are not cancelled and we’re still required to go out there.

Corrine picked me up and we spent a terrifying half an hour on the freeway that was pretty much like an ocean. Yeah, we got there and the mood was pretty low. We were told that the referee said the game is going ahead. We were warming up in the dressing sheds but we didn’t really have room to move. It wasn’t our best warm-up.

Yeah, I mean, we can blame the conditions but really we weren’t mentally prepared for that game and we lost 4-2. I had to come off early with a foot injury. Corinne and I were seething silently, and head-to-toe drenched the whole way home. I felt like crying, I was so disappointed to lose that match, but it really revealed how much our team was taking this seriously. That went on to be our only loss of the season. We were just like, “We’re not going to lose again.”

We did have three draws, which meant that we finished second, but it really felt like we’d one. We’re so proud of how we went this season. Last weekend, our captain Bridget read off a 7,000-word End of Season Speech.

In which each player of the team was named an ingredient in a Boston Bun? You had to be there…

Also, I’d been really grateful to have friends come and watch the games, and I try and encourage as many people to come as possible. You guys should all come, cheer us on. Yeah, I realised that I do need a team. This is not the story of how a total loner like myself became a social addict. I still do appreciate my space and time, and a day or two a month where I don’t see anyone… except maybe people at the laundromat.

I’ve been learning that building a friendship sometimes only needs two things: Time and openness. They were things that I had become poor at until I moved here. And I needed to reach out, so I’m reaching, and my arms have never been longer. Thank you.