Ally Garrett: It’s In The Bag 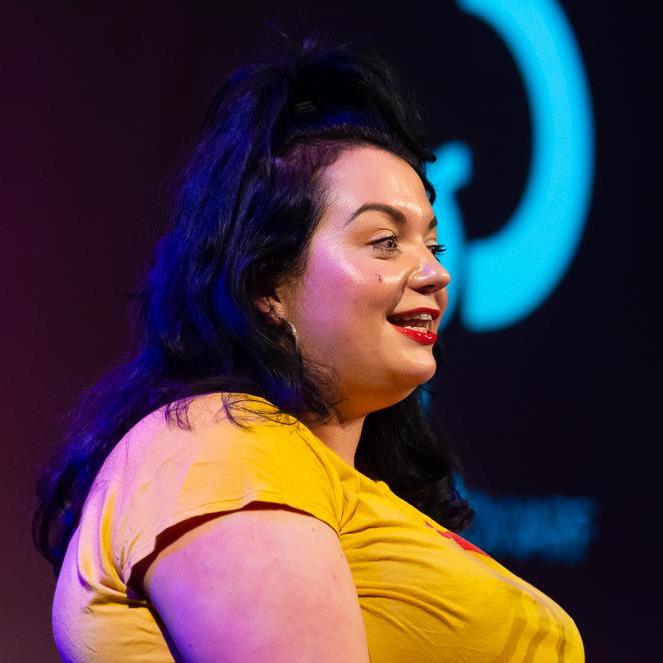 Ally Garrett has been writing and speaking on body politics and fat activism for the past decade, with her writing featured in The Guardian, Daily Life and ABC Life. Ally performed this story in Sydney at Giant Dwarf.

So, tonight, if it’s okay, I’d like to tell you about the stupidest thing that I’ve actually ever done.

A few weeks ago I was walking home on a Friday night. Then I got a text message from a coke dealer. “Pearly whites, out tonight, not to be missed. Special! Two for $550.”

Not that long ago, I had passed on the number to somebody else, which was a lawyer that I’ve been trying to impress. I thought that giving him this number, it actually might make him more likely to marry me. It hasn’t worked yet, but my phone lit up not long after that first message. It was the lawyer. And he’d clearly received the same text. “Wanna go halves on some coke for the next time we hang out?” I tend to lose my mind when I have a crush on someone, so I found this message extremely romantic.

Not only was he suggesting hanging out again but this cocaine was actually going to be our first joint purchase. I thought that after we bought the coke, a couch from IKEA was going to be just around the corner.

Time was passing incredibly slowly. I was desperate to take my bra off because I’d gotten home, and once I take my bra off, I can’t possibly leave the house again, and I knew I had to have another interaction with a drug dealer. I sent off a text message at about 11:45 saying that “I’m very sorry, Mr Drug Dealer, but I actually have to go to bed.”

The dealer messaged me back, “26 minutes.” This sounded promising. It was precise enough that it actually sounded like it had been inserted into a Google Map. Then, about twenty minutes later, my phone rang. It wasn’t the usual chick on the phone, it was a dude. “Hey, we’re just about to pull up outside. We’re in a silver Toyota Camry.” Now, because I’m gay and I can’t drive, I’ve got no idea… like, no idea what a Toyota Camry looks like. Not a clue. Toyota Camry? Never met her.

The colour silver, though, that I know. So, I opened my front gate and, conveniently, there was a silver car pulling up right outside. I walked over and I tried to open the front door of the silver car, and it was locked. I jiggled on the door handle and the driver looked uneasy.

I thought maybe it was because I’d been so demanding about his arrival time. I’d been extremely assertive. He opened it and I was going to sit down in the front seat of the silver car to drive around the block – the way you usually would with a dealer – but I noticed just in time that there was actually a single lone McDonald’s bag sitting on the front seat. I clocked the bag, and I remembered recently that when a very dear friend of mine had bought some weed recently, the driver had actually come dressed as a Deliveroo driver. He had the turquoise polo neck, he had the servant turtle backpack.

So he had the whole deal. So I saw the Maccas bag and I thought, “How entrepreneurial!” Trends spread so quickly these days. Drug dealers are actually all out here pretending to be part of the gig economy. So I tried to sit down, and the driver said, “Oh, it’s all in the bag.”

I took the bag, and I gave the driver the money, and I…

… well, yeah. I gave him a wad – a thick wad – of notes, into the car. He looked slightly shocked. As soon as I shut my car door, he locked all of the car doors and sped off into the night. “They’re really busy tonight,” I thought. “He must be late for another delivery.” The bag, it smelled like road trips, and hangovers, and sitting around waiting for a delayed flight in an airport. “Gosh, this is really realistic.” I walked back into my apartment. “They’ve even made it smell like Maccas.”

Standing at my kitchen bench, I opened the bag. Inside, there was a ten-piece pack of chicken nuggets and a sweet and sour sauce. “Fuck,” I think. “This is so thorough. They’ve outdone themselves! That must be why it took so long. They were packaging up a ten-piece of nuggies with every delivery – It’s really time-consuming. I wonder if they should have gone for fries instead. There’s a lot of vegans in Sydney who like a night on the baggies, and I think there would’ve been less food wastage.” There would’ve been less food wastage if they went fires instead.

“We’re outside, where the fuck are you?”

I’m like, “What the fuck? I just gave you the money and I took the bag!”

I’m like, “I took a Macca’s bag! Not an actual bag! I thought it was a delivery!”

He’s like, “A fucking Macca’s bag? Fuck… Dude, I think you just gave the money to an Uber Eats driver.”

And that’s when I realised my coke dealer had been parked up in a silver Toyota Camry behind the silver car pulling up outside my house. I had accidentally paid $550 for a box of chicken nuggets. And when you do the maths…

So it’s at this point of the story that, for balance, I like to consider all of the different perspectives. The Uber driver, who was essentially car-jacked by an impatient fat woman for some breaded chicken. I mean, was it his best day ever at the office? $550 for one delivery.

I also like to think of the person who ordered the nuggets. Is she my neighbour? Does she see me in the street and think, “There goes the nugget thief.” Did the driver go to Macca’s and replace them himself? Or did he log out of Uber, never to drive again?

I can’t actually report him in this scenario. I’m very clearly the one in the wrong here. I stole those nuggets… and then I tipped him $550. I’d never actually thought of not being able to drive as a real problem. It seemed like the only repercussion was not being able to return the favour of a ride to the airport. I wish I could go back in time and tell my awkward, horny teenage self the consequences of not wanting driving lessons. If only she’d only learned just enough that we could identify a Toyota Camry on site, then I wouldn’t actually have this problem.

That night, my coke dealer offered to drive me around the corner to the ATM but I declined. Not only did I not have any money left, but I actually couldn’t look him in the eye. I’m also still so embarrassed that I haven’t even been able to tell the lawyer that I bought us chicken nuggets instead of cocaine.

I’d go over on a Monday, I’m like, “No, it’s a school night. You know.” And just let that actually be a reminder to any undercover cops in the audience – I didn’t actually buy or use any drugs in this story… Just McDonalds.  And if there are any parents in the room tonight, if you want to keep your children safe around drug dealers, please, please teach them how to drive. Thank you.